Complete Colon Duplication with Rectovesical Fistula: A Case Report of a 3-Year-Old Child with Lifelong Obstipation

Duplicates of the gastrointestinal tract are rare malformations, which most commonly become symptomatic and are diagnosed during the first two years of life. In this case report, we will recount the story of a 3-year-old patient, who introduced himself with lifelong, intractable obstipation and intermittently emanating stool from the penis. Intraoperatively a complete duplicate of the colon frame with rectovesical fistula became evident. After three procedures, a temporary ostomy, and a final separation of the septum via multiple colostomy and occlusion of the fistula, the boy is now free of complaints.

Duplicates of the gastrointestinal tract are rare congenital malformations, which can affect the entire gastrointestinal tract from the mouth to the anus [1, 2]. The most common manifestation can be found in the ileum, whereas colon duplicates are the least frequent. In most cases, children under the age of 2 years are diagnosed, who present themselves with symptoms of an acute abdomen or obstipation [1, 2]. Here we will describe the case of a 3-year-old Rumanian boy, who introduced himself with obstipation and stool emanating from the penis.

The patient is a 3-year-old Rumanian boy with lifelong obstipation constantly requiring treatment and with intermittently brown urine. Near to home, a colon contrast enema and a cystoscopy were performed. The enema showed a massive coprostasis; the cystoscopy suggested a rectovesical fistula. Directly postpartally no abnormality had been seen, and the boy had passed meconium normally. As an infant, the boy was treated surgically for a tetralogy of Fallot. Clinically the patient presented himself in a good general condition; the anus was properly installed with radial puckering and normal contraction. The MRI displayed a strongly distended rectosigmoid filled with stool without any indication of anal atresia. The cystoscopy showed a rectourethral fistula that was splinted. The preoperative rectoscopy could not show the transurethral catheter’s balloon. This examination, too, did not point to atresia.

First, a laparascopical exploration was started, which then was converted to an open-surgical exploration due to a lack of overview caused by the massively distended colon frame. It revealed a massively dilated and duplicated colon frame (Figure 1); the cecum showed at first two appendices and two taenia libera. Due to the massive dilatation; a protective double-barreled ileostomy was created. After three months, a relaparotomy was performed. Preoperatively the patient received a coloscopy via stoma and from aboral (Figure 2) and cystoscopy with splinting of the fistula. After decompression of the bowel, two cecal poles with three appendix bases, that joined into one appendix, became evident. Also, a duplicate of the terminal ileum in the area of the ileocecal transition could be seen. In the area of the colon transversum, a distinct septum could be felt. The septum was severed via colostomies of the right flexure, the proximal colon ascendens and the sigmoid via LigaSure (Figure 3). 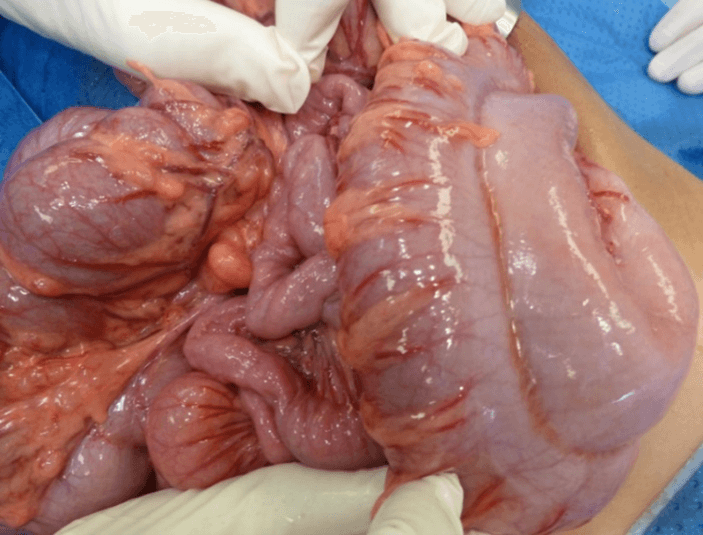 Figure 1: Intraoperative presentation of the first exploration: it shows a massively dilated and duplicated colon frame with a clearly palpable membrane. 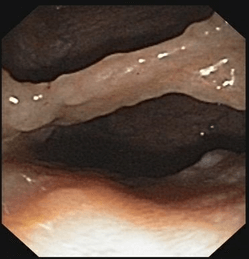 Figure 2: Endoscopy of the colon: it shows a membrane between the doubled intestinal parts. 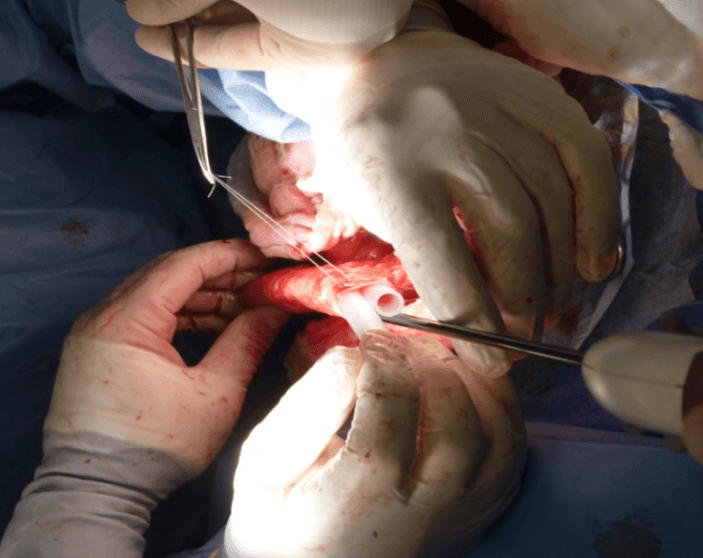 Figure 3: Intraoperative presentation of the doubled intestinal parts before resection of the membrane using ligasure.

Finally, the rectourethral fistula was occluded. The ileostomy was left for three months for further decompression and remodeling purposes. After a final coloscopy with endoscopial resection of leftover mucosal bridges, the stoma could be relocated without any problems. Postoperatively there were no complications. The boy is without complaints since one year after the last surgery.

Duplicates of the gastrointestinal tract that become apparent in one out of 4500 autopsies are rare anomalies and were first described in 1733 by Calder [3]. In the group of these anomalies, the ileum and the ileocecal valve are most frequently affected 30% of the cases, the jejunum in 8%, the colon in 6-7% and the rectum rarest in 5%. Anatomically they can be divided into cystic (90%) and tubular duplicates (10%). Tubular duplicates either are y-shaped or, as in our case, double-barreled [4]. Literature describes those tubular duplicates have a connection to the bowel on one side while the other side can end perianal, blind or as urogenital fistula [5].

Symptoms in patients with colon duplicates vary according to size, varying severity and anatomy and can vary from unspecific gastrointestinal symptoms such as vomiting or obstipation to volvulus, bowel perforation, or mechanical ileus [6]. Most often, the diagnosis is made in 1-year-old children; not diagnosed duplicates in adults are rare [7]. Often gastrointestinal anomalies are not singular. Associated anomalies are urogenital duplicates, skeletal malformations, bladder exstrophy, malrotation, omphalocele and Meckel’s diverticulum. If no other malformation exists, it is possible that tubular malformations can be asymptomatic a lifelong and therefore can stay undetected [8-10]. As therapy, the literature suggests an elective operative treatment via resection of the duplicate when the patient is in a clinically stable condition. One aspect needed to be considered is that duplicates can degenerate malignantly in adults. In children, this has not yet been observed. Therefore, for asymptomatic patients, the complete resection needs to be discussed [10-12]. An argument against resection is difficult and sometimes impossible procedure when the duplicate and the native bowel have a mutual blood supply [11].

In our case, resection of the duplicate would not have been possible due to the magnitude and the mutual blood supply because the approach would have been a total colectomy. In our case, the separating septum between duplicate and native bowel was resected in order to obtain a common duct. The literature shows at least one other case with a similar approach [12]. In summary, an operative therapy for symptomatic duplicates is indicated and a bowel duplicate with rectovesical fistula must be considered as a differential diagnosis.

© 2021 Celia Eckstein. This is an open-access article distributed under the terms of the Creative Commons Attribution License, which permits unrestricted use, distribution, and reproduction in any medium, provided the original author and source are credited. Hosting by Science Repository. All rights reserved.
DOI: 10.31487/j.SCR.2021.09.02

Figure 1: Intraoperative presentation of the first exploration: it shows a massively dilated and duplicated colon frame with a clearly palpable membrane.

Figure 2: Endoscopy of the colon: it shows a membrane between the doubled intestinal parts.

Figure 3: Intraoperative presentation of the doubled intestinal parts before resection of the membrane using ligasure.