Clear cell sarcoma-like tumor of the gastrointestinal tract (CCSL-GIT) is a very rare and aggressive mesenchymal neoplasm. It occurs predominantly in adolescents and young adults [1]. The tumor classically is associated with tendons and aponeuroses of lower extremities of young adults and has a distinctive histopathologic and molecular profile. It has been rarely described in other locations other than soft tissues, including the gastrointestinal tract [2]. To date, only a few cases have been described in the literature on the GI tract.

Based on these findings, we proceeded to an explorative laparoscopy, during which we observed an intraluminal, rigid lump in the jejunum, located 150 cm from the ligament of Treitz and 310 cm from the ileocecal valve with enlarged lymph nodes in the root of the mesentery (Figures 3 & 4). A 20 cm segment of jejunum containing the mass was resected with its mesentery, and primary side to side anastomosis was performed. The patient's post-operative recovery was uneventful, and he was discharged three days later. 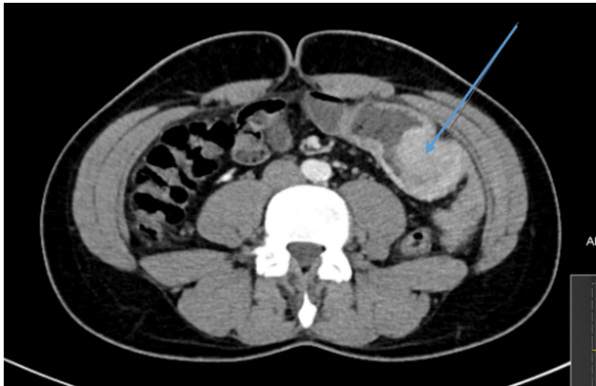 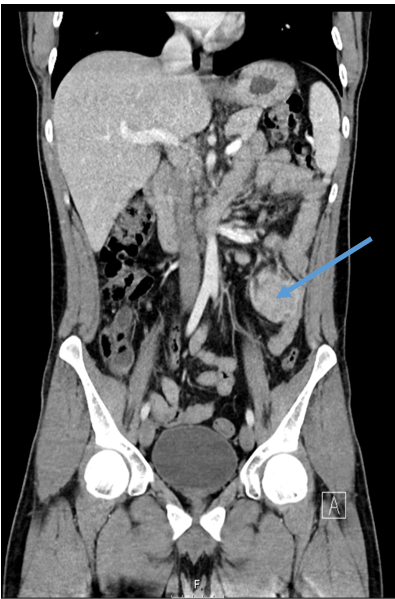 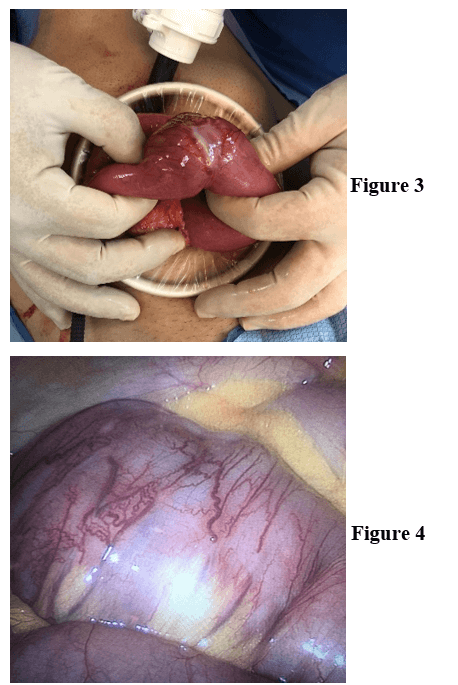 A pathologic examination of the biopsy revealed tumor cells positive for S100 and SOX10, and negative for pankeratin, synaptophysin, chromogranin, CD56, DOG1 and HMB45. Based on these findings, a diagnosis of CCSL-GIT was made. FISH break-apart probe for EWSR1 translocation was positive in 78% of cells, consistent with the diagnosis. Surgical margins were clean. Lymph nodes were free of metastasis.

In order to establish a proper staging, the patient went through a PET-CT examination, which revealed a few small lymph nodes (less than 0.7 cm) in the mesenterial root with a moderate absorption (SUV MAX 3.7) seen in some of them. This absorption can be interpreted as a post-operative reactivity of the lymph node. No chemotherapy or radiation were advised by the oncologists. Currently, it has been six months after the operation, and the patient is regularly followed up without evidence of disease.

Clear cell sarcoma-like tumor of the gastrointestinal tract (CCSL-GIT) is a very rare and aggressive tumor. Only a few case reports and small patient series have been reported worldwide. It is a mesenchymal neoplasm, arising within the wall of the small bowel, stomach, or large bowel. It occurs predominantly in adolescents and young adults and is equally distributed among genders [1]. Most patients present with abdominal pain, with or without evidence of intestinal obstruction, or with an incidental finding of an abdominal mass on imaging. Some patients have nonspecific symptoms of anorexia, weight loss, lethargy or pyrexia and occasionally present with vomiting or hematemesis [1].

The etiology of CCSL-GIT is unknown. Some reported cases have occurred as secondary malignancies following irradiation for neuroblastoma and hepatoblastoma in infancy, suggesting radiotherapy as a possible causative factor [3-5]. Only two cases of post-operative radiotherapy and chemotherapy were reported: one in a patient who had a synchronous colonic adenocarcinoma and another in a patient with progressive disease [1, 6]. Both subsequently developed metastases from CCSL-GIT.

Clinically, CCSL-GIT is characterized by highly aggressive clinical behaviour, with a high risk of recurrence and metastatic disease and short survival. A large proportion of patients with CCSLTGT have metastases at presentation. The median survival ranges from 8-18.5 months [1, 6]. Reported metastatic sites include the liver, lymph nodes and intra-abdominal sites [2].

CCSL-GIT is positive for S100 protein and SOX10, invariably negative for melanocytic-specific markers and is often also positive for neuroendocrine markers. Many studies have shown associations with EWSR1-CREB1 gene fusion and less frequently, with EWSR1-ATF1 fusions [1, 6, 7].

There are currently no reliable clinical or histological parameters helpful in predicting tumor behaviour, and optimal management is yet to be fully established. The usual management is resection of the tumor with its corresponding bowel segment followed by close monitoring for locally recurrent and metastatic disease, including regular imaging [1].

CCSL-GIT is a very rare and relatively recently characterized tumor. It is extremely aggressive, with very high rates of metastatic development and poor survival. Due to its rarity a consensus concerning treatment has not been formulated yet. Therefore, multidisciplinary discussion between oncologists and surgeons is crucial for individualizing the optimal management of each case.

Written informed consent was obtained from the patient for publication of this case report and accompanying images, it is available for consultation.

They confirm that the manuscript has not been published elsewhere and is not under consideration by another journal.

© 2021 A Assalia. This is an open-access article distributed under the terms of the Creative Commons Attribution License, which permits unrestricted use, distribution, and reproduction in any medium, provided the original author and source are credited. Hosting by Science Repository. All rights reserved.
DOI: 10.31487/j.SCR.2020.06.24