Hemophagocytic lymphohistiocytosis (HLH) may be secondary to cancer or other conditions in adults. We aimed to compare characteristics and outcomes of secondary HLH depending on cancer status among adults. Weight loss over 10 %, headache and enlarged lymph nodes were more frequent in malignant- HLH (M-HLH). Higher phosphatase alkaline level and CRP level were present in M-HLH. Mortality rate tended to be higher in M-HLH group in the first month and during the two years follow-up. Some clinical features and biological abnormalities are associated with an increased probability of malignancy in secondary HLH among adults.

Hemophagocytic lymphohistiocytosis (HLH) is a rare and life-threatening syndrome secondary to an immune dysregulation leading to hypercytokinemia and accumulation of activated macrophages in organs [1]. HLH is associated with a high rate of intensive care unit (ICU) admission and death [1]. HLH belongs to the “H-group” in the revised classification of histiocytoses and neoplasms of the macrophage dendritic cell lineages proposed by the Histiocyte society [2]. According to the HLH-2004 criteria, HLH diagnosis is retained if patient fulfills five of eight criteria among: prolonged fever, cytopenia, splenomegaly, hypertriglyceridemia and/or hypofibrinogenemia, decreased NK-cell function, elevated ferritin, elevated soluble Il-2 receptor levels and hemophagocytosis [1]. A novel diagnostic approach (H.S score) has been proposed but is not yet validated in international trials [3]. HLH pathophysiology is complex and dependent upon the etiology of HLH. Regardless of etiology, the hallmark of the disease is abnormal activation of CD8 T-lymphocytes leading to inflammatory cytokine production and organ failure caused by activated macrophages invasion [1, 2]. HLH is considered as a primary event when germline mutations are identified in genes implicated in immune system regulation or susceptibility to infections; and secondary when triggered by other conditions (i.e., infections, neoplasia, inflammatory disorders, drugs) [2, 4, 5]. For a long time, HLH was considered as a consequence of cytotoxic defect but recent data suggest an important role of inflammation in HLH genesis in adults [6, 7]. Most HLH case among adults are secondary to cancer or inflammatory disorders [8].

Treatment of “inflammatory state” is based on cytotoxic agents (dexamethasone and etoposide) as recommended in the HLH-2004 protocol; but identification and treatment of underlying conditions are essential for long-term survival [1, 8, 9]. Indeed, mortality rate seems higher in malignancy-associated HLH than in non-malignancy-associated HLH [10]. From that perspective, we aimed to compare characteristics and outcomes of secondary HLH according to the cancer status of adults presenting with HLH diagnosis.

Cases were retrieved from the database of adult patients (over 18 years old) from Besancon university hospital from January 1999 to February 2019. Diagnosis of HLH was considered if patient fulfilled at least 5 of 8 criteria of the 2004 HLH criteria. All patients also had HLH probability over 90% using H.S score [3]. Patients with solid cancer/ hematological malignancy were classified in the malignancy-associated HLH group if diagnosis of neoplasia was assessed within the 6 months of HLH diagnosis.

Data have been extracted from the hospital databases and statistical analysis were performed using Prism (GraphPad, San Diego, CA, USA) and R version 4.0.2 (R Foundation for Statistical Computing, Vienna, Austria). The study was conducted in accordance of institution review board of the institution. A total of 29 patients were included in the study (15 patients in the “malignancy-associated HLH (M-HLH)” group and 14 in “other secondary HLH non malignancy HLH (NM-HLH) group”). Patients were mainly hospitalized in the Internal Medicine, Infectious Diseases, Hematology departments and in the Intensive Care Unit. Mean age of patients was 58.4 years old (±18.6) without difference between the two groups. Sex distribution was similar in both groups. The most frequent condition in “M-HLH” group was hematological malignancy (n=12); and was Still’s disease in the “NM-HLH” group. Characteristics of the patients are reported in (Table 1).

Regarding clinical presentation, general conditions such as fatigue, anorexia did not differ between groups but weight loss greater than 10 % was more frequent in the “M-HLH” group (p: 0.012). Headache was more frequent in the “NM-HLH” group (p: 0.042) but other clinical features (i.e., arthralgias, abdominal pain, skin manifestations) were similar between both groups. Enlarged lymph nodes were more frequent in “M-HLH” group” (p: 0.039) but hepato/splenomegaly and effusions were similar between groups (see table 1). Time delay between first symptoms of HLH and diagnosis tended to be shorter in “M-HLH” group (p: 0.17). Biochemical and hematological tests including blood count cells, renal function, coagulation test, inflammatory biomarkers (CRP/PCT) were similar between both groups except alkaline phosphatase level which was higher in “M-HLH” group (160 U/L (±79.5) vs 477 U/L (±716); p: 0.014). CRP tended to be higher in “NM-HLH” group (189 mg/dL (±121) vs 112 mg/dL (±86.9); p: 0.085). Infections associated with HLH diagnosis were a frequent condition (n= 27/29) with mostly virus replication (n=21).

Regarding outcomes, almost half of patients (41%) were hospitalized in ICU but proportionally similar between both groups (p: 0.88). Mortality rate tended to be higher in “M-HLH” group during the first month of the study and at one-year follow-up (p: 0.25 and p: 0.065 respectively) (see Table 3). At one year following HLH diagnosis, overall mortality using Kaplan Meier survival curve demonstrated a higher death rate in “M-HLH” group (p: 0.049) (Figure 1). Finally, malignancy was independently associated with mortality at 1 year in multivariate logistic regression (OR: 6.85 CI 95% [1.29-54.80], p: 0.037). 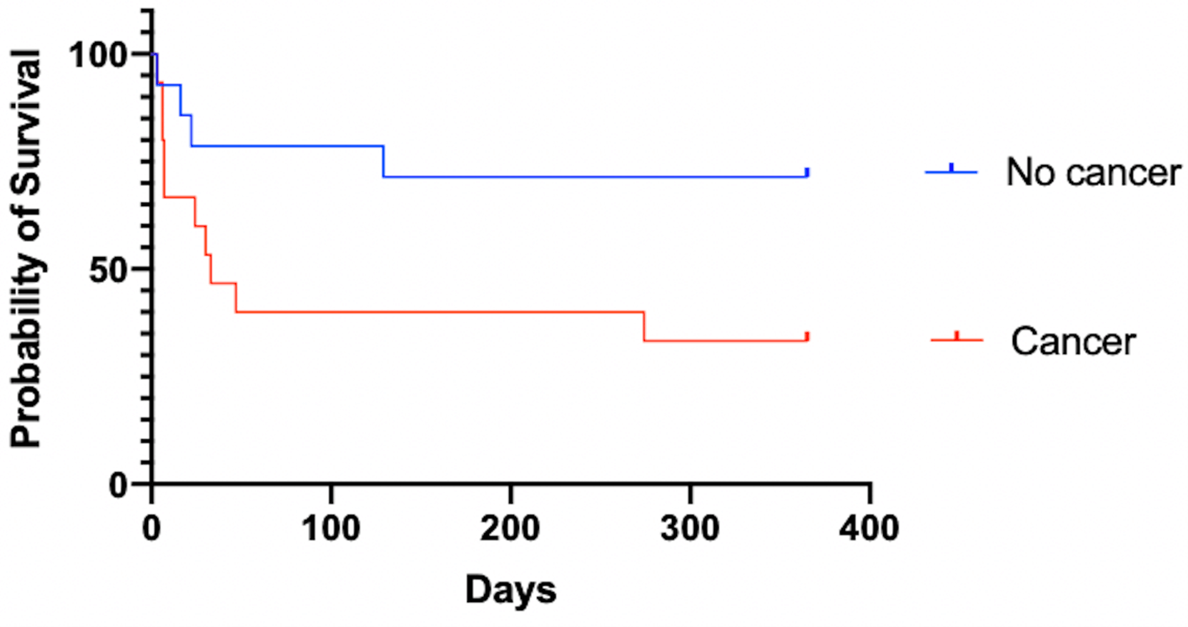 Figure 1: Kaplan Meier survival curve at one year follow up according to the etiology of HLH.

We herein report a comparative study of adult secondary hemophagocytic lymphohistiocytosis related to cancer status. Malignancy-associated HLH leads to a higher rate of death as previously reported in literature [10, 11]. The main differences at diagnosis presentation are clinical features (weight loss, enlarged lymph node, absence of headache) predictive of “M-HLH”. Central nervous system involvement has been reported in HLH as confusion or seizure [1, 6]. Because headache is a frequent symptom in the general population, attempting to establish a relationship between headache and etiology of HLH diagnosis is largely irrelevant. No biochemical parameters, except alkaline phosphatase, could predict an association with cancer. Elevated CRP cannot differ “M-HLH” group from “NM-HLH” group because HLH is associated with an inflammatory state. Interestingly, procalcitonin level was also very high in both groups despite evidence of concurrent bacterial infection, as already reported in patients with HLH [11].

Elevated acute phase reactant (CRP, PCT, ferritin, fibrinogen) are secondary to hyperinflammatory state related to HLH but not correlated with bacterial infection. As reported in literature, we have observed a high rate of viral infection at diagnosis of HLH, mostly by Epstein-Barr-Virus [1, 2, 6, 12]. One of the main difficulties in the diagnosis is to decipher the viral component in triggering HLH (as in primary HLH) from the suspicion of other underlying conditions (i.e., cancer or inflammatory disease). As “M-HLH” is associated with high rate of death, we encourage physicians to perform full body imaging (computed tomography or 18FDG-PET) and bone marrow examination at the diagnosis of HLH to search for cancer.

Regarding pathophysiology, EBV and CMV are usual triggers of HLH. Both viruses are recognized by Toll-like receptor, mostly TLR-2 [13, 14]. This recognition induces cascade of intracellular pathway responsible for interferon-gamma production. It leads to Th-1 polarization of CD4+ T lymphocytes and expansion of CD8+ T lymphocytes [14]. Interferon-gamma can also stimulate Janus kinase-STAT(JAK-STAT) signaling pathway in resident macrophages to increase inflammation in organs. As malignant cells are more sensitive to interferon-gamma than other cells, we hypothesized that early death in cancer group are related to a higher hyperinflammatory profile [15].

There are some limitations to this study. First of all, it is a retrospective study with data collection-based patient records. Patients were also evaluated by different specialists and this factor could bias the diagnosis delay from first symptoms to HLH diagnosis depending on physician experience. Moreover, data records did not specify if death was related to relapse of HLH, side effects of chemotherapy, infections or cancer itself. Another limitation is the heterogenicity of treatment before 2004 (and validation of HLH 2004 protocol) with sometimes IV Ig, cyclophosphamide or ciclosporin as induction therapy. This treatment approach could bias the survival rate during the first month of HLH.

The major strength of our study is that data is derived from the same tertiary center for 20 years. To our knowledge, this is the first study comparing clinical and biological features at the HLH diagnosis depending on cancer status. Further studies should be performed to validate our findings. To conclude, malignancy-associated HLH is related to high mortality rate compared to other secondary HLH. Clinical features such as weight loss or enlarged lymph node are predictive of malignancy at HLH diagnosis.

AP and JR designed the study. AP collected the data, AP and JR wrote the initial draft. JR, SH, TS performed the statistical analysis. All authors provided clinical, biological data of patients and provided primary care for patients. All authors reviewed the article, participate in editing and approved the final version of the manuscript.

© 2023 Nadine Magy-Bertrand. This is an open-access article distributed under the terms of the Creative Commons Attribution License, which permits unrestricted use, distribution, and reproduction in any medium, provided the original author and source are credited. Hosting by Science Repository.
DOI: 10.31487/j.COR.2022.03.04

Figure 1: Kaplan Meier survival curve at one year follow up according to the etiology of HLH.