Introduction: Psychotic and non-psychotic genital self-mutilation is well documented in males, although the incidence has been reported to be higher in females. However, a case in reference to a caenis syndrome in old woman is less reported. We report a rare case of caenis syndrome exhibited with entirely different food habits over the years.
Case: A 72-years-old female, who was a referred a case from District Hospital Chittorgarh with alleged history of doing self-cut down of her prolapsed uterus via vaginal route with the help of domestic knife. Following which she developed heavy vaginal bleeding and severe pain. On admission the patient was comfortable, oriented with stable vitals. On double set up per speculum examination showed a clear-cut end of the vaginal vault with no active bleeding. Further, psychiatric reference of the patient revealed that she had a major depressive disorder due to repeated rejection of surgical management for her prolapsed uterus over the past 30 years, and she started developing a strange eating habits since past 5 years with irregular excessive eating and hunger strike. Conservative management and counselling were done to her. The ultrasound study of the whole abdomen revealed normal post-hysterectomy status.
Conclusion: Based on the observation, it recommends that awareness regarding the female genital mutilation is to be created and appropriate counselling should be initiated at an early age. Special care for the elderly women who are treated as a part of neglected society would necessary be taken care in all hospitals.

A 72-years-old female who was a referred a case from District Hospital Chittorgarh, Rajasthan with alleged history of doing self-cut down of her own prolapsed uterus via vaginal route with the help of domestic knife. Following which she developed heavy vaginal bleeding and severe pain. On admission the patient was comfortable with stable vitals, patient had disoriented talks at times during the time of examination. On double set up per speculum examination (Figure 1) there was clear cut ends of the vaginal vault with no active bleeding. Psychiatric reference of the patient revealed that she had a major depressive disorder due to repeated rejection of surgical management for her prolapsed uterus over 30 years due to the medical complication of bronchial asthma. She was also on irregular compliance to treatment due to the improper care of the family members. She also had developed strange eating habits for the past 5 years with alternating excessive eating and hunger strike for weeks, as stated by the attender (daughter). 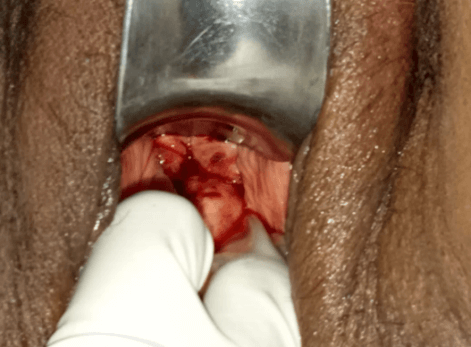 Physician reference revealed grade 3 Bronchial asthma and was prescribed with steroids inhaler and long acting bronchodilators. Conservative management was planned, and counselling was given to both the patient and family members. Ultrasound whole abdomen revealed normal study with post-hysterectomy status. Other routine blood investigations were normal.

Caenis syndrome is a triad of genital self-mutilation, hysteric personality disorder and eating disorder. Long back, two similar case study has been reported by Goldney and Simpson (1975) [2]. Conde et al. (2017) reported a peculiar case of a 20-year-old female patient who resorted to the emergency department after having amputated her clitoris with surgical scissors [3]. This dramatic gesture, coupled with the patient's narrative, prompted for differential diagnosis between a psychotic syndrome and a severe personality disorder. Hence, this case has been associated with the self-mutilating gestures in borderline personality disorder. Another case of deliberate genital self‐mutilation in a woman with familial schizophrenia has also been presented. Though such behaviour is well recognized in females with harsh personality disorders, it is also exceptionally rare in female psychotics [4]. It concludes both neuropsychological and psychodynamic factors seemed to be of relevance in this case. However, our case report has clearly revealed that the patient had major depressive disorder as a result of repeated surgical rejection. The grading of female genital self-mutilation is given in detail in the (Table 1).

Table 1: Types of grading of female genital self-mutilation (followed WHO,1997).

In Greek mythology, Caenis was originally a woman, daughter of Atrax. Caenis was abducted and raped by the God Poseidon, after which he grants her a wish. Caenis was so distraught that she demanded to be changed into a man, so that she might never be wronged again. Poseidon granted this wish, and also gave Caenis impermeable skin.

From this report we conclude that more awareness regarding the female genital mutilation is to be created so that appropriate counselling can be initiated at an earlier stage. Majority of Indian females are always treated to be neglected society and above all elderly females are a part of rejected society. Therefore, extra care should be given to the elderly females with proper mental and physical support throughout their life. February 6th of every year is celebrated as “STOP VIOLENCE AGAINST FEMALE GENITAL MUTILATION”. Gender equality and sex education are to be included in curriculum of education.

© 2021 Priya Aarthy Archunan. This is an open-access article distributed under the terms of the Creative Commons Attribution License, which permits unrestricted use, distribution, and reproduction in any medium, provided the original author and source are credited. Hosting by Science Repository. All rights reserved.
DOI: 10.31487/j.CROGR.2020.01.08

Table 1: Types of grading of female genital self-mutilation (followed WHO,1997).