Beating the Record: 157 Days of Delayed Delivery of The Second Fetus in a Twin Pregnancy

Case Report: We present the case of a diamniotic-dichorionic twin pregnancy of 14+4 weeks with obstetric history of cervical incompetence. The premature delivery of the first twin took place, with unfortunate outcome. The second twin was left in utero. The management, at first, included combination of expectant attitude with a close monitoring of maternal constants and analysis, and administration of antibiotics; in a second step, after discarding intraamniotic infection, a McDonald cerclage was performed with success. At 37 weeks the cerclage was removed and after Oxytocin induction, a healthy baby was born.
Conclusion: Delayed delivery of the second fetus in a twin pregnancy is an effective management choice. The use of cervical cerclage after the first delivery is associated with a longer inter-delivery interval. The behaviour in these unusual cases should be assessed individually, due to the scarce literature on the matter and the lack of unanimous protocols. But, always considering the maternal and fetal status, trying to improve perinatal results with a strict maternal surveillance to discard the appearance of a possible intraamniotic infection.

The implementation of Assisted Reproduction during the last twenty years has increased the incidence of multiple pregnancies. These pregnancies may generate maternal and fetal complications, especially preterm delivery which remains the most important complication of multiple gestations [1]. The birth of the first twin is usually followed by the unavoidable delivery of the following child or children. In case of immature birth, most neonates die shortly after delivery [2]. In selected cases, when one fetus is delivered vaginally very prematurely, the remaining fetus can be retained in utero to hope for a delayed-interval delivery which may improve neonatal survival and decrease neonatal morbidity [3].

In 1880, there was the first report of delaying the delivery of a second twin by 44 days in a pregnancy with uterus did elphus by Carson [4]. After the first observation in 1880, sporadic cases were published, in which a wait and see attitude was adopted. Thomsen’s paper in 1978 marked the change in the obstetrical management with the success of an active attitude (tocolytics, cerclage, prophylactic antibiotics) [5]. The unavoidable birth of one premature neonate has led our efforts to the aim of delayed interval delivery for the other twin. In some cases, one or more infants must be born due to intrauterine risks or stillbirth. According to the literature there is absence of unanimity about the best management for these pregnancies.

We present the case of a 28-year-old woman with a diamniotic-dichorionic twin pregnancy of 14+4 weeks, who consulted in November 2018 for hydrorhea and a feeling of weight at hypogastrium level. As an obstetric relevant background, she had 3 previous late abortions, the first one in Algeria of 20 weeks in 2010 with any document regarding the event; the second one of 20+5 weeks in 2015 in Spain; and the third one of 21+0 weeks in 2016 in Spain, too. Being the latter a twin gestation where a primary cerclage was performed due to a certain diagnosis of cervical incompetence, with unfortunate outcome.

The post-mortem studies, anatomopathological research and microbiological results were given as normal; therefore, discarding the presence of chorioamnionitis in the previous abortions. Gestational control was correct until then, it was a spontaneous twin pregnancy, with the following gestational risk factors: gestational diabetes diagnosed at first trimester treated with insulin, hypothyroidism, and obesity (BMI 35.1).

First trimester ultrasound performed at 12+4 weeks resulted within normal (Figure 1), with both fetuses according to the gestational age, with no apparent abnormalities. The transvaginal ultrasound showed a cervical length value of 36 mm, with no funnel. Low risk combined first trimester screening (CFTS) for both fetuses, normal analytical values and negative serologies in first trimester. Prophylactic or history-indicated cervical cerclage was considered to be performed at 15 weeks, with previously vaginal and endocervical culture, and the STDs PCR test, with negative results for all of them. 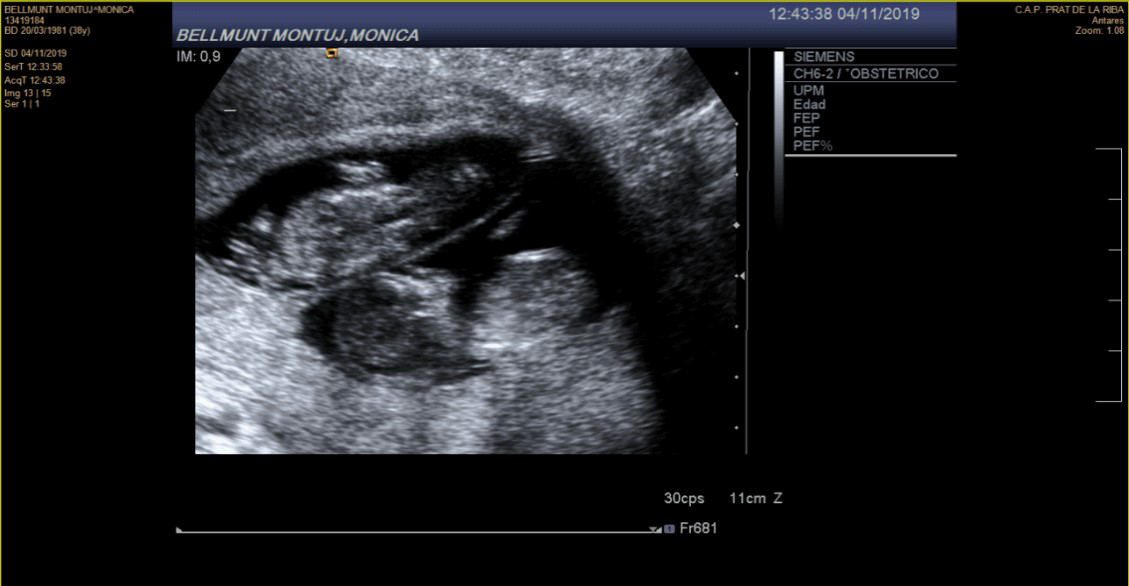 Upon arrival at the emergency room, the patient was in good overall health, with the only complaint about the hydrorhea and the feeling of weight at hypogastrium level since a few hours ago. The gynaecological exploration was carried out: at the examination with the speculum, it was found the amniotic sac of the first fetus protruding into the vagina with fetal parts inside; the Amnioquick test was performed confirming the premature rupture of membranes; vaginal and endocervical culture, and the STDs PCR test were processed. On the digital vaginal examination, it was evident that the cervix was almost effaced and dilated up to 4 cm surpassed by the amniotic sac. A transvaginal ultrasound was displayed showing the first fetus with a part of its amniotic sac in vagina and negative cardiac activity; and the second fetus with positive heartbeat, normal amniotic fluid and fetal biometrics concordant to the gestational age. The analysis values were normal, without any suggestive alteration of intrauterine infection (PCR 9 mg/L, leukocytes 9.62x10x9/L).

Shortly afterwards, the delivery of the first fetus occurred, being XY and macroscopically normal; the placenta was not expelled. Eventually, vaginal and cervical washings were performed with chlorhexidine, which is bacteriostatic and kills both Gram-positive and Gram-negative microbes; and the umbilical cord was proximally clamped. Empirical antibiotic therapy was initiated with Azithromycin 1g single dose, Gentamicin 240mg/24h and Ampicillin 1g/6h. After five days of admission, with no changes regarding the clinical status and the analysis, a subsequent vaginal examination was performed showing that the cervix was tightly closed, with a length of 36 mm by ultrasound. The STDs PCR multiplex test resulted positive for Ureaplasma Parvum and Mycoplasma Genitalum, already treated with Azithromycin at the admission; the other cultures were negative. Consecutive control of STDs PCR test showed a negative result. Given the absence of clinical or analytical signs or symptoms of intraamniotic infection, an expectant behaviour was proposed with the aim of delaying the birth of the second twin.

After a month of hospital admission, maintaining a wait-and-see attitude, the patient remained completely asymptomatic, and all the sequential analysis resulted within normal (Figure 2), also the vaginal, the endocervical, and the vaginal-rectal culture, and the STDs PCR test were all repeated in several cases with negative results. Despite the scarce literature on the matter, the decision to perform a tertiary cervical cerclage type McDonald at 18+5 weeks was taken into account in agreement with the patient. The procedure was performed without incidences. The amniocentesis prior to cerclage was dismissed, given the low clinical and analytical suspicion of intraamniotic infection, and the risk of iatrogenic amniorrhexis taking into consideration the patient's obstetric history.

The patient remained hospitalized under observation for three more weeks until 21+6 weeks, when she was discharged with subsequent controls in the High-Risk obstetrical care Unit (Table 1) and periodical analysis, having a great evolution. 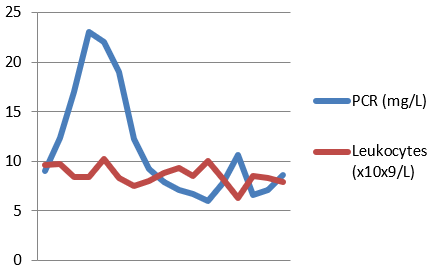 
At 37 weeks, the patient was cited to remove the cervical cerclage without incidences. Induction of labour was initiated with oxytocin due to favourable Bishop score, and a healthy boy of 3170g was born with correct APGAR score and right arterial and venous ph. During delivery, both placentas were expelled, observing the difference in size between both of them (Figure 3). Between the expulsion of the first fetus and the birth of the second one, the gestation was prolonged 157 days. 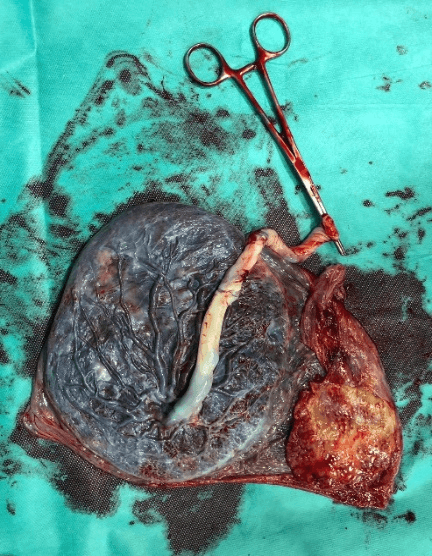 Figure 3: Expulsion of both placentas at the delivery of the second fetus.

The use of cervical cerclage to prevent preterm birth in patients with incompetent cervix has been an issue of continuing debate. The study presented by Zhang et al. (2003) suggests that in cases of delayed interval delivery, cervical cerclage after the first delivery is associated with a significantly longer inter-delivery interval. During the early stage of parturition, the cervix, composed mostly of collagen and connective tissues, undergoes dramatic changes. Collagen breaks down, and the cervix softens, effaces and dilates large enough to allow the fetus to pass through. Although ample evidence has demonstrated that cerclage is not indispensable for pregnancy to continue after the first delivery, it may provide stability to the cervix and the much-needed support for the remaining gestation [6, 7].

In the presented case, the optimal treatment would have been to perform a history-indicated cerclage, previously known as primary cerclage, between 13 and 16 weeks of gestation. And it could have been performed abdominally or vaginally, according to protocols [8-10]. As there was little literature on performing the abdominal cerclage in first trimester in twin pregnancy, and the low experience in its performance, it was rejected. Initially, there was consensus on the performance of a history-indicated cerclage, due to the presence of three second-trimester abortions with a certain diagnosis of cervical incompetence. However, it was not possible to perform it as scheduled due to the early expulsion of the first fetus.

There are very few cases published with successful obstetric results in cases of twin pregnancies with expulsion of one of the fetuses and intact amniotic membranes of the remaining twin [11-13]. In the case we report, after four weeks with clinical and analytical stability, it was performed, in agreement with the patient, a physical-indicated cerclage previously known as an emergency or tertiary cerclage with strict maternal-fetal surveillance afterwards.

The prevalence of spontaneous multiple gestations is increasing mainly due to Assisted Reproductive Technology. One of the most prevalent complications in twin pregnancies is prematurity, being the most important cause of neonatal morbidity and mortality in this group. Cervical incompetence represents 10% of the causes of preterm delivery and is also associated with significant neonatal morbidity and mortality. Although in most cases there is a history of late fetal loss or preterm delivery without uterine dynamics, up to 50% of cases are associated with the presence of subclinical intraamniotic infection [9].

According to the systematic review published by Cheung et al. in 2019, which included 16 studies with a total number of 492 pregnancies (432 twins, 56 triplets, 3 quadruplets and 1 quintuplet), the delayed delivery when a fetus has been delivered in a multiple pregnancy is an effective management option to increase the survival rate of the remaining fetus (es). The reported mean duration of delayed interval delivery ranges from 12 days to 42 days, which means most of these pregnancies, may not be prolonged long enough to reach the periviable or early preterm gestation [14]. The study of Hamersley et al. included in the systematic review reported the longest delayed interval of 153 days, in which the first and the remaining twin were delivered at 15+3 weeks and 37+2 weeks, respectively [15].

The study of Cheung et al. in 2019 also highlights that the survival rate of the remaining fetus remains very poor at 29% when the first delivery is performed before 20 weeks of gestation. The study of Arabin et al. concluded, as well, that delayed-interval delivery appears to be associated with improved perinatal outcomes, especially for those second twins whose delivery is delayed, when the first twin is delivered between 20 and 29 weeks [16].

In the reported case, the delivery of the first fetus occurred at 14+4 weeks and the delivery of the second fetus occurred at 37 weeks; therefore, the prolongation of gestation was achieved for a total of 157 days, to the best of our knowledge the longest delayed-interval delivery reported to date. The behaviour in these unusual cases should be assessed individually, due to the scarce literature on the matter and the lack of unanimous protocols. But, always considering the maternal and fetal status, trying to improve perinatal results with a strict maternal surveillance to discard the appearance of a possible intraamniotic infection.

© 2021 Lourdes Sala Climent. This is an open-access article distributed under the terms of the Creative Commons Attribution License, which permits unrestricted use, distribution, and reproduction in any medium, provided the original author and source are credited. Hosting by Science Repository. All rights reserved.
DOI: 10.31487/j.CROGR.2020.01.06

Figure 3: Expulsion of both placentas at the delivery of the second fetus.