Amelanotic Acral Lentiginous Melanoma of the Heel: A Case Report of Misdiagnosis.

Acral lentiginous melanoma is an uncommon skin cancer that usually affects palms, soles, and nail apparatus of elderly Black and Asian individuals. Diagnosis is difficult, as it may mimic benign or traumatic lesions such as plantar warts or diabetic ulcers, especially if it is amelanotic. For this reason, detection is challenging, and proper diagnosis and treatment is often delayed, ultimately resulting in a poor prognosis. We report an 83-year-old Hispanic female with a two-year history of a painful, non-healing, glistening, exophytic mass on her left heel that was previously treated as a wart prior to proper biopsy and management. Patient education, complete physical exam and greater knowledge about this tumor, whether pigmented or not, are an important weapon to prevent its aggressiveness, increasing patients’ survival rate by decreasing the risk local invasion and metastasis. Biopsy should always be considered, especially in the setting of unresponsiveness to the treatment.

Melanoma is a cancer that arises from melanocytes, which embryologically derive from neural crest cells and can be found within the epidermis, mucous membranes, eyes and meninges [1]. Currently the 6th and 7th most common malignancy in men and women respectively in the United States, cutaneous melanoma (CM) has an incidence rate rising faster than any other cancer [1, 2]. Cutaneous melanoma accounts for approximately 90% of cases of melanoma and has an estimated incidence of over 90,000 cases and resulted in 9,320 mortalities in the United States thus far in 2018 [1, 3].Melanomas at uncommon sites and those lacking classical clinical features are often diagnosed later than typical CM [4]. Although acral lentiginous melanoma (ALM) represents only 5% of all CM, it has the lowest survival rates, usually due to misdiagnosis, which delays treatment and increases the risk of mortality [2, 5, 6]. Amelanotic melanomas (AM) carry poor outcomes due to delays in diagnosis and also have a lower survival rate when compared to pigmented melanomas [7]. We report an 83-year-old patient with a two-year history of an amelanotic ALM on her left heel that was previously misdiagnosed and treated as a plantar wart.

An 83-year-old Hispanic female presented to clinic with a two-year history of a painful, non-healing wound on her left heel. Past medical history was non-remarkable. She had previously undergone treatment with topical wound care dressing as well as offloading by a community provider. After two years of unsuccessful treatment and growth of the wound, the patient was referred to the dermatology clinic. On physical exam, a 4x4 cm glossy, red to pink, exophytic nodule clinically appearing as granulation tissue was noted (Figure 1). The lesion lacked cutaneous coverage and was protruding from the sole of her left heel (Figure 2). A 4 mm punch biopsy was performed with histopathology revealing an ulcerated mass of epithelioid, amelanotic melanocytes (Figure 3, 4, 5, 6, 7 and 8). Based on these findings, the diagnosis of acral lentiginous melanoma was made. The tumor was invasive, with a Breslow depth of at least 2.6 mm, (limited by the depth of the biopsy), in a vertical growth phase and had 9 mitotic figures per mm2. Clark level was IV (bordering on V) and no regression, angiolymphatic invasion, perineural invasion, microscopic satellitosis, or associated melanocytic nevi were identified. Following diagnosis, the patient was referred to the Surgical Oncology service where wide local excision together with Plastic Surgery was recommended. Two weeks later, a 2 cm wide excision and a sentinel lymph node biopsy were performed by the Surgical Oncology team, and skin graft placement was done by the Plastic Surgery team. Further investigation revealed negative lateral and deep margins as well as a Breslow depth of 10 mm, and a negative sentinel node biopsy lead to a final stage of IIC. There were no postoperative complications, and the skin graft healed well, with continued Wound Care and Surgical Oncology follow up. The patient is currently undergoing monitoring with Oncology and considering adjuvant therapy. 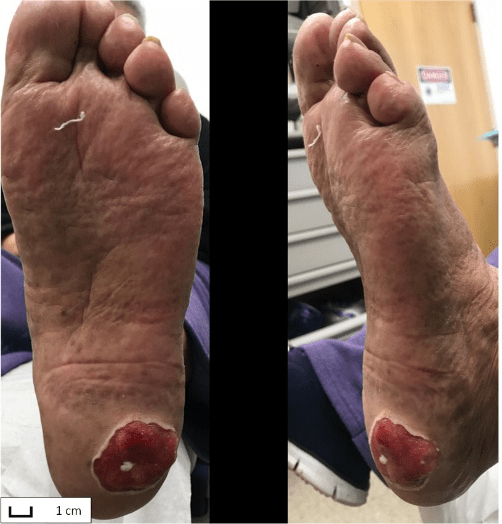 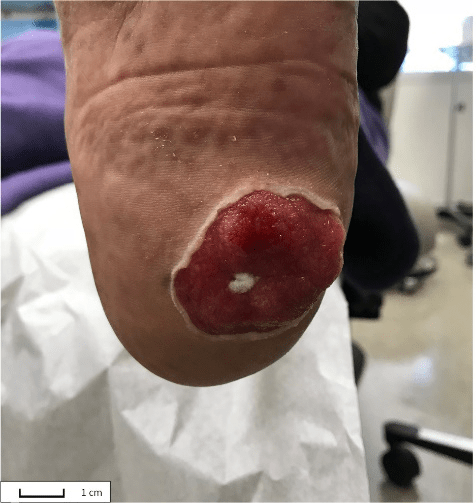 Figure 2: There were focal areas of hemorrhage and a collarette of macerated epidermis. 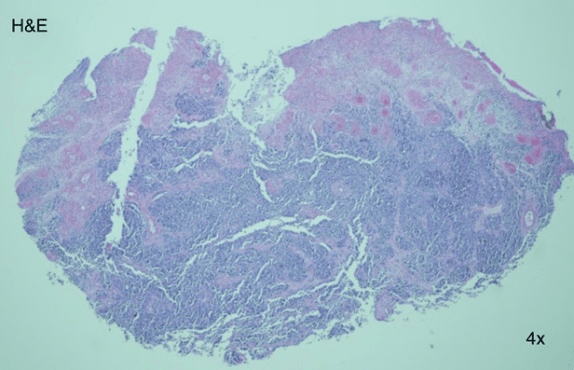 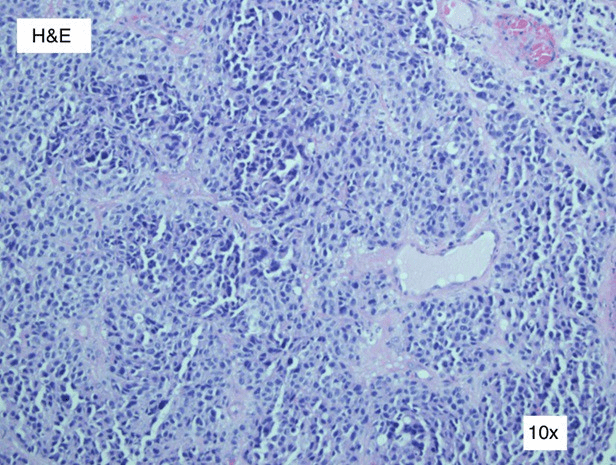 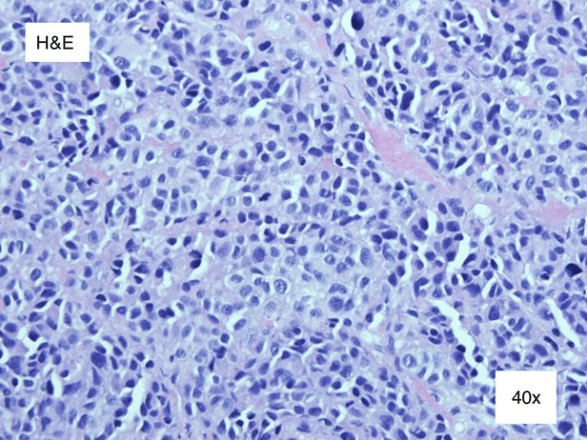 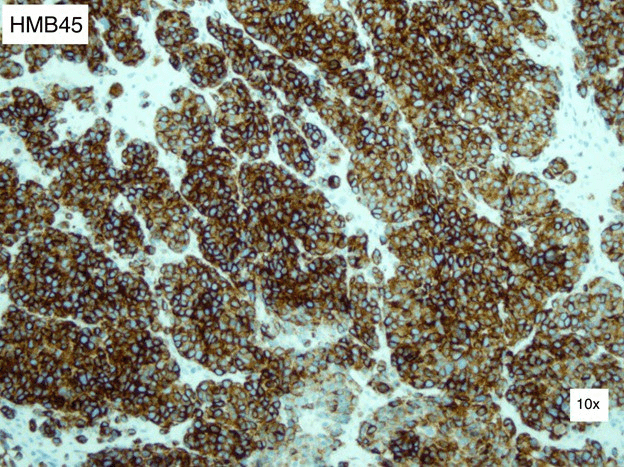 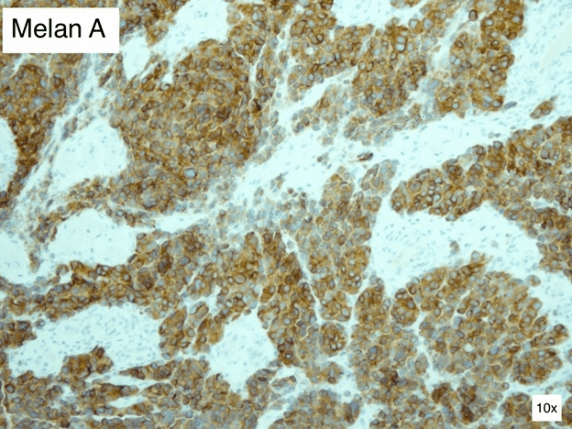 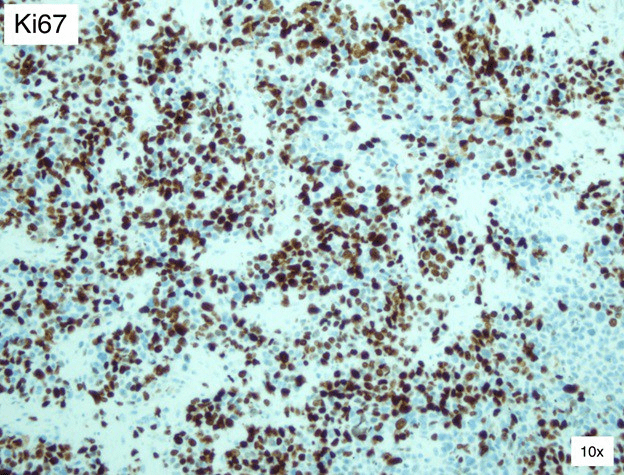 Figure 6, 7 and 8: HMB-45 and Melan A stains were diffusely positive. One third to one half of the cells were positive for Ki-67.

Hispanic patients have the highest incidence of ALM (2.5 new cases per 1,000,000 persons per year), followed by Black and Asian persons [2]. Although typically presenting as an asymmetric brown-to-black macule with color variation and irregular borders, ALM is not easily diagnosed due to the unusual location and difficulty in clinically distinguishing it from other lesions, such as plantar warts, diabetic ulcers, benign nevi or infections [5, 6]. This delaying postpones proper treatment and ultimately leads to increased mortality [2, 6]. Breslow depth is the single most important prognostic indicator in all types of melanoma [1, 5]. The frequent misdiagnosis of ALM causes a median delay of 12 months in the diagnosis of palmoplantar melanomas and 18 months of subungual melanomas, leading to a worse prognosis compared to CM [6]. Delayed diagnosis allows ALM to be more invasive than CM at diagnosis, with a large study by Bradford et al. showing that 70% of CM are diagnosed at 0.01-1 mm in depth and 14.3% at > 2 mm, in opposition to 41% and 37% for ALM, respectively [2]. Regarding the stage at diagnosis, Stage I accounted for 38% of ALM in contrast to 68% of CM. Acral lentiginous melanoma in Hispanic patients is often diagnosed in Stage III (40.2%) and with a tumor thickness > 2 mm in 34.1% of cases.

Amelanotic melanomas are rare, accounting for less than 2% of CM, representing up to half of the incorrectly diagnosed tumors; these misdiagnoses include warts, callus, fungal infection, foreign body granuloma, crusted lesion, sweat gland infection, blister, non-healing wound, mole, keratacanthoma, subungual hematoma, onychomycosis, and ingrown toenails [8, 4]. Amelanotic melanomas also have a greater Breslow depth at diagnosis when compared to pigmented CM, likely for the similar reasons as outlined above for ALM [7, 9]. The median tumor thickness at diagnosis is 1.6 mm for AM and 0.68 mm for pigmented melanomas; in addition, melanomas with higher tumor stage at diagnosis are more likely to be amelanotic [7].

We present a case of a diagnostically challenging amelanotic ALM. Acral lentiginous melanomas and AM both independently lead to a poor prognosis when compared to CM, and when both features are present, the results can be disastrous for the patient. The increasing prevalence of ALM and the diagnostic challenge warrants extra attention in dark-skinned patients regardless of the presence of pigment. This risk can be minimized with greater awareness of these tumors, a thorough physical exam, proper patient education and early biopsy when acral lesions do not behave as expected.

The authors have no competing interests to declare.

Ethics approval and consent to participate

© 2019 José M. Furlaneto Jr. This is an open-access article distributed under the terms of the Creative Commons Attribution License, which permits unrestricted use, distribution, and reproduction in any medium, provided the original author and source are credited. Hosting by Science Repository. All rights reserved.
DOI: 10.31487/j.SCR.2019.03.11

Figure 2: There were focal areas of hemorrhage and a collarette of macerated epidermis.

Figure 6, 7 and 8: HMB-45 and Melan A stains were diffusely positive. One third to one half of the cells were positive for Ki-67.