Acquired Microcolon after 20 Years of Colostomy: Can it be Saved?

Objectives: To report a case of a stoma reversal in a patient with an acquired, extreme microcolon after a long-standing transversostomy and to give a review of the current literature.
Methods: Case report and literature review by performing a PubMed database search, using the keywords Santulli enterostomy, anal atresia, posterior sagittal anorectoplasty and acquired microcolon.
Results: An 18-year-old patient with a previous history of anal, rectal and sigmoid atresia, was admitted to our hospital with an acquired microcolon due to a long-standing transversostomy. The patient had a posterior sagittal anorectoplasty at the age of one year, but by reason of an enormous dilatation of the ascending colon and the associated discrepancy of the caliber of the proximal and distal colon, the colostomy was maintained. The patient was lost in follow-up during several years. Now, 16 years later, the patient requested closure of the colostomy. Since barium enemas still showed a dilated colon ascendens and a microcolon descendens, a staged approach was chosen. First, a right hemicolectomy was performed and a Santulli enterostomy was created by constructing an ileocolostomy just proximal of an end ileostomy. Progressively, more transanal bowel movements were seen and barium enemas showed a progressive expansion of the remaining colon and rectum. Test closing of the enterostomy using an inflated bladder catheter did not cause signs of obstruction. During the second stage, 17 months later, at the age of 20 years, the stoma was closed. Now, the patient has two to three solid stools a day, with a complete fecal continence.
Discussion: The used technique is well known in pediatric surgery. We successfully implemented it in the treatment of a microcolon in an adult. The advantage is that we can feed the distal colon to achieve expansion, while the enterostomy functions as a venting system, hereby preventing obstructive complaints when the caliber of the colon is still narrow. In conclusion, long-standing colostomas with a concurrent microcolon can be closed but require a step-by-step approach.

A microcolon is an abnormally small caliber colon secondary to disuse. Its length is usually normal [1]. Causes of a microcolon can either be congenital or acquired. During the second and third trimester of pregnancy, the fetus normally swallows amniotic fluid and together with the digestive juices this forms the meconium, that passes through the bowel and distends the colon gradually prior to birth [2]. A congenital microcolon is seen in children with intestinal tract atresia or an obstruction proximal to the colon, resulting in underutilization of the colon during intrauterine life. In long-standing enterostomies in children with a history of anal or rectal atresia, the development of an acquired microcolon may occur, but also in adults with a long-standing ileostomy or transverse colostomy, the development of an acquired microcolon has been reported [3, 4]. Typical radiologic features of a microcolon on a fluoroscopic single contrast enema are shortening of the bowel, tubulation and lack of haustrations, all signs of atrophy. The lumen is non-distensible [3, 4]. Some authors defined a microcolon as a colonic segment with a caliber less than the height of the vertebral body of L1 [5]. The presence of a microcolon in patients requesting stomal closure can be a problem, since obstructive complaints and anastomotic leakage can occur due to severe discrepancy between the proximal and distal bowel limbs. In our hospital, we implemented the technique of a Santulli enterostomy in an innovative way for the treatment of a microcolon in a young adult with a long-standing transversostomy as a bridge to restore the continuity, and this with a successful outcome. 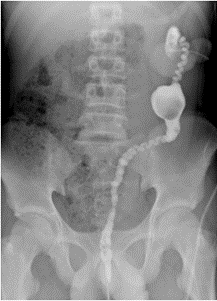 Figure 1: Preoperative barium enema: anteroposterior radiograph of the abdomen after administration of iodinated contrast medium via transverse colostomy. This nicely shows the microcolon morphology of a functional descending colon. A dilated segment containing a fecaloma can also be seen.

At the age of 18 years, after discussing the case at an international forum of pediatric surgeons, a right hemicolectomy was performed and a Santulli enterostomy was created by constructing an ileocolostomy just proximal of an end ileostomy (Figure 2). The postoperative course was complicated by unsustainable abdominal pain and raised inflammatory parameters. Standard analgesics (paracetamol 1g QID, tradonal 100mg QID and taradyl 10mg TID), an epidural morphine pain pump and low dose catapressan did not bring relief. An explorative laparotomy was performed, not showing any abnormalities or leakage. Abdominal cultures showed Pseudomonas aeruginosa. Piperacillin-tazobactam was started and antibiotic therapy was later narrowed to ciprofloxacine. Adequate pain relief was obtained at the Intensive Care Unit using a pain pump (patient controlled intravenous analgesia with morphine), a dexmetomidine and ketamine drip and Transtec 70mcg transdermal patches. The further postoperative course was uneventful. The length of hospital stay was 23 days. Progressively, more transanal bowel movements were seen and barium enemas showed a progressive expansion of the remaining colon and rectum (Figure 3). Test closing of the enterostomy using an inflated bladder catheter did not cause signs of obstruction. At the age of 20 years, the ileostomy was stapled closed. After 3 days, the patient was discharged. Now, the patient has two to three solid stools a day, with a complete fecal continence and a good quality of life. 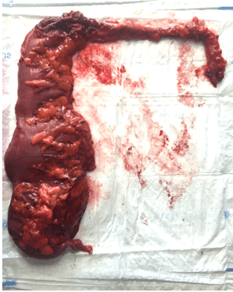 Figure 2: An image of the resection specimen: right hemicolectomy with transversostomy and distal microcolon. 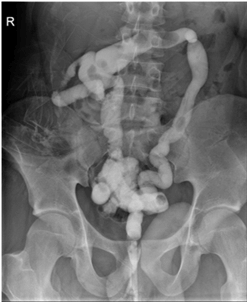 The construction of a Santulli enterostomy is a well-known technique in pediatric surgery, first described by Santulli in 1961 for the treatment of NEC in neonates (Figure 4) [6]. It is constructed after resection of an intestinal segment by anastomosing the end of the distal limb to the side of the proximal limb, that is ending in an enterostomy. The Santulli enterostomy and its mirror construction, the Bishop-Koop enterostomy, are used in neonates with meconium ileus, necrotizing enterocolitis (NEC), midgut volvulus, apple-peel syndrome and intestinal atresia [7].

Figure 4: The concept of a Santulli enterostomy.

We implemented this technique for the treatment of a microcolon in an adult with a long-standing colostomy, before the continuity finally could be restored. The used technique of performing a right hemicolectomy and anastomosing the descending colon to the side of the terminal ileum, ending in an enterostomy, is a variation on the classic technique in which normally two small bowel limbs are anastomosed. The advantage of this technique is that we can feed the distal colon to achieve expansion, while the enterostomy functions as a venting system, hereby obtaining decompression of the proximal bowel and preventing anastomotic dehiscence and obstructive complaints when the caliber of the colon is still narrow. In case of failure of the intent to grow the microcolon, a left hemicolectomy with definitive end ileostomy would have been warranted in our patient, but this only as a last resort.

Literature on the use of a Santulli enterostomy in colonic atresia is scarce, often not recent and mostly describes a pediatric population. Karnak et al. reported in 2001 the use of a Santulli enterostomy in neonates with colonic atresia. In two patients, a two-stage approach was performed similar to our case: first constructing an end-type colostomy and afterwards converting it to a Santulli-type colostomy. In one of these two patients, the colostomy was closed afterwards, the other patient died due to a non-NEC related cause. In one case, a Santulli enterostomy was constructed during the initial operation, but the enterostomy was not closed during the follow-up but the reason was not reported [8]. Vanamo et al. published in 2004 a case series of 19 premature neonates who underwent a Santulli enterostomy for NEC. However, a complication rate of 68% was seen in these NEC patients, mainly anastomotic leakage of the Santulli enterostomy or a concurrent end-to-end enterostomy, but also further intestinal necrosis, necrosis of the enterostomy and intestinal obstruction. In some cases, obstructive symptoms after stomal closure necessitated the construction of a new Santulli enterostomy or a revision of the anastomosis [9]. To prevent these obstructive symptoms and anastomotic problems, Bischoff et al. recommend creating a window-type of stoma in cases of colostomy closure in children where a size discrepancy between the proximal and distal limb greater than 10:1 and a distal microcolon are present. Typically, this window is created 5 to 10 cm proximal to the anastomosis. For size discrepancies up to 4:1 an end-to-end anastomosis is preferred and in size discrepancies greater than 4:1 but smaller than 10:1 a side-to-end anastomosis is preferred, but both without a window-type of stoma proximal of the anastomosis [10].

As proven in our case, a Santulli enterostomy can be a valid alternative of an ostomy a few centimeters proximal to an anastomosis, since the proximal limb of the Santulli enterostomy also functions as a window. Another advantage of a window-type stoma is that the growth and functioning of the distal microcolon can be evaluated by monitoring the flow of bowel fluids through the stoma and via the anal route and that contrast imaging of the anastomosis and growing microcolon can be performed by administration of contrast through the stoma. We did not choose the mirror technique of the Santulli enterostomy, the Bishop-Koop enterostomy, in which the end of the proximal limb is anastomosed to the side of the distal limb ending in an enterostomy, because we considered the importance of the proximal venting superior to these of the irrigation of the distal part of the colon [11]. A third advantage is that closure of this type of enterostomy is technically not challenging, since it only consists of resection of the enterostomy loop by stapling and closure of the abdominal wall and skin [12]. No mobilization of bowel is needed for creating an anastomosis, because the anastomosis is already created during the first operation.

We have demonstrated with this case that a long-standing ostomy with acquired microcolon can be reversed. It is, however, a lengthy process, requires a multidisciplinary approach and can be associated with severe pain problems in the early postoperative phase. This should be discussed with the patient before starting the process.

Special thanks to Prof. Dr. Niels Komen for proofreading the article and to Dr. Simon Nicolay for editing the radiologic images.

© 2021 Liesbeth van Bergen. This is an open-access article distributed under the terms of the Creative Commons Attribution License, which permits unrestricted use, distribution, and reproduction in any medium, provided the original author and source are credited. Hosting by Science Repository. All rights reserved.
DOI: 10.31487/j.SCR.2021.08.11

Figure 1: Preoperative barium enema: anteroposterior radiograph of the abdomen after administration of iodinated contrast medium via transverse colostomy. This nicely shows the microcolon morphology of a functional descending colon. A dilated segment containing a fecaloma can also be seen.

Figure 2: An image of the resection specimen: right hemicolectomy with transversostomy and distal microcolon.

Figure 4: The concept of a Santulli enterostomy.

2.      Berdon WE, Baker DH, Santulli TV, Amoury RA, Blanc WA (1968) Microcolon in newborn infants with intestinal obstruction. Its correlation with the level and time of onset of obstruction. Radiology 90: 878-885. [Crossref]

12. Meijer WS, Vermeulen J, Gosselink MP (2009) Primary resection and side-to-end anastomosis next to an end-colostomy in the management of acute malignant obstruction of the left bowel: an alternative in selected patients. Tech Coloproctol 13: 123-126. [Crossref]