A 78-year-old male was turned up to the emergency room with a 5-day history of vomiting, diffuse abdominal pain, and altered bowel habits. After physical examination, routine blood tests, chest, and abdominal radiographs, as well as an abdominal ultrasound had been contacted to examine his ongoing symptoms, a serious intestinal obstruction was revealed. Bowel obstruction is interrelated with his medical history, as he suffered from inoperable prostate cancer. A CT scan was performed to exclude an associated complication. A plastic, 3cm diameter, water bottle cap was in the ileum revealed with no evidence of perforation or collection. A colonoscopy by an experienced endoscopist failed to reach and retrieve the plastic water bottle cap. Finally, the plastic water bottle cap was removed through an enterotomy. Even if a careful history taking can give a clue for diagnosis, the cause of bowel obstruction could be a surprise.

An ingested foreign body constitutes a gastrointestinal emergency and causing significant morbidity and mortality. Children, denture-wearing adults, prisoners, and patients with psychiatric disorders seem to be vulnerable to foreign body ingestion [1]. Foreign bodies could be ingested or inserted accidentally or intentionally [2]. In many cases, foreign bodies pass through the gastrointestinal tract spontaneously without any problem. Usually, an ingested foreign body can pass through the small intestine without serious consequences and be excreted in the feces. On the other hand, 10-20% of them will have to be removed endoscopically, and about 1% will require surgery [2]. Complications such as perforation hemorrhage or obstruction are required surgical treatment. Small-bowel obstruction is a non-common complication [3]. A wide range of ingested foreign objects have been described. Unfortunately, the morphology of these items is not usually recognized during ultrasonography or CT imaging. In this case report, we describe the diagnosis and management of a patient with senile dementia with a small bowel obstruction due to the ingestion of an unusual foreign body, a plastic water bottle cap.

A 78-year-old male with a background of inoperable prostate cancer and dementia was admitted to our hospital with bilious vomiting for 5 days. He had not evacuated his bowels for 2 days. Despite the disorientation of his mental capabilities, he was able to communicate verbally and display a partial medical history. His vital signs were normal. The examination was unremarkable, including his abdomen, which was soft with a sense of distension. Rectal examination showed no significant abnormalities. His routine blood tests, including full blood count, electrolytes, liver function tests, and amylase levels, were in the normal range. However, urea and creatinine were influenced. C-reactive protein (CRP) was 21 mg/L. Chest and abdominal radiographs were taken, which did not show free air in the subdiaphragmatic area but showed air-fluid levels (Figure 1).

A day after admission, an abdominal ultrasound scan demonstrated gross faecal loading and no collection of fluid in the pouch of Douglas. Continuously, a surgical review was carried out. The abdominal examination revealed a hard, distended abdomen with metallic bowel sounds. The surgical team considered bowel obstruction as the cause of bilious vomiting and asked for an abdominal CT scan (Figures 2A & 2B). An abdominal CT scan was carried out without the usage of contrast substance due to the kidney insufficiency. Multiple dilated small bowel loops with a transition point in the terminal ileum were indicated and a plastic 3cm diameter water bottle cap was identified. 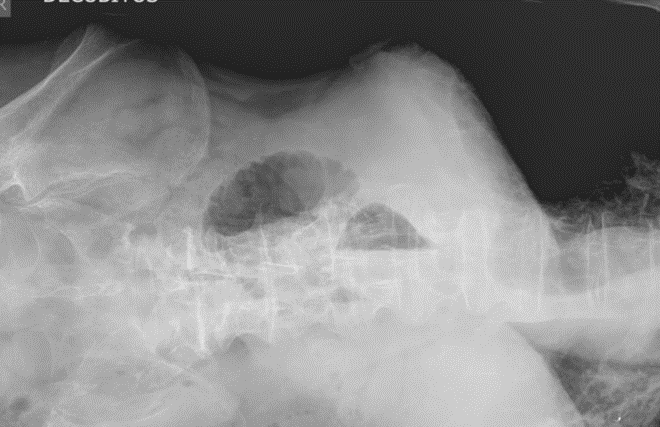 Attempts of endoscopic localization and removal were unsuccessful and a surgical management was necessary. Subsequently, an initial laparoscopic approach with a single incision was decided. A small umbilical incision under direct visualization to enter the abdominal cavity was created, followed by the introduction of a blunt trocar. Pneumoperitoneum is then rapidly created. An abdominal overview actualized. The foreign body was identified in the terminal ileum. Due to difficulties, a laparoscopic removal could not become. A part of the small intestine came out of the abdominal cavity. Finally, the plastic water bottle cap was removed through a longitudinal enterotomy (Figure 3). The inflammation indexes were reduced. The patient made a quick and good recovery with a nice aesthetic outcome. He was discharged home 3 days postoperatively. 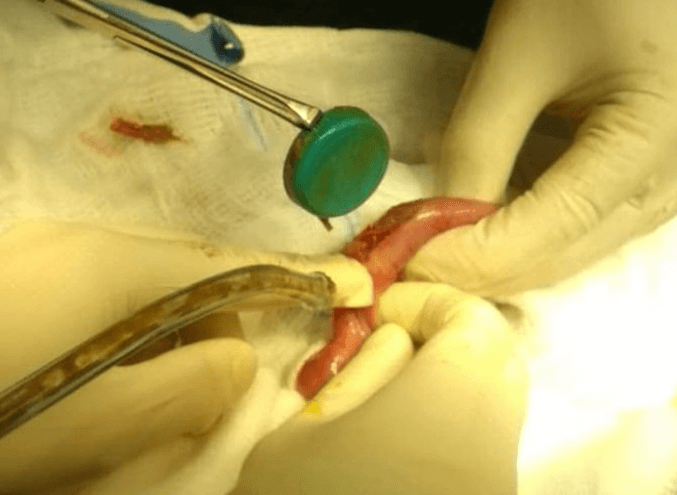 Figure 3: The plastic water bottle cap was removed through a longitudinal enterotomy.

Ingestion of foreign bodies is relatively common in elderly people and people with dementia. The majority of them does not display intestinal obstruction due to the small size of the ingested objects. Small-bowel obstruction is an uncommon complication of the ingested foreign body because the foreign body can cross the whole small intestine and be excreted in the feces [3]. More cases in literature support that foreign bodies can pass to the distal ileum [4]. Depending on the localization of the foreign object, some patients are requiring endoscopic removal. On the other hand, other patients will be finally operated, due to either toxic foreign body ingestion or complications presence [3]. An aggressive surgical approach to intestinal obstruction in the pediatric disabled or mentally retarded population is recommended [5]. Ingestion of whole plastic water bottle cap as the cause for small bowel obstruction in the elderly has been reported once before [6]. Our case highlights that bowel obstruction in the elderly with cancer may happen due to foreign bodies. A surgical approach, laparotomy or laparoscopy, is useful not only to correct the possible complications but also to definitively clarify the diagnosis [7].

This is an unusual clinical presentation of subacute partial small intestinal obstruction. The use of a single incision laparoscopic surgery-assisted technique in the removal of an ingested foreign body proves to be quick as the duration of the procedure was less than an hour and safe as there was no bleeding. Furthermore, the retrieval of masses or foreign objects via the umbilical port or a single incision will succeed with less postoperative pain and a faster retrieval time [8]. Subsequently, even a conversion of a single-incision laparoscopic surgery in a small incision laparotomy seems to prove to be safe and feasible and provides a quick recovery with a good cosmetic outcome [9].

We would like to thank the hospital staff who took part in the care of the patient.

© 2021 Panagoula Oikonomou. This is an open-access article distributed under the terms of the Creative Commons Attribution License, which permits unrestricted use, distribution, and reproduction in any medium, provided the original author and source are credited. Hosting by Science Repository. All rights reserved.
DOI: 10.31487/j.SCR.2021.01.12

Figure 3: The plastic water bottle cap was removed through a longitudinal enterotomy.