A Very Rare Cause of Dilated Cardiomyopathy after Bariatric Surgery: Selenium Deficiency

Background: Sleeve gastrectomy for weight loss has increased significantly nowadays. Various complications may develop after this surgery that requires long-term follow-up of these patients. Nutrition is the most important aspect of the follow-up. The deficiency of trace elements, fat-soluble and water-soluble vitamins following bariatric surgeries have been well-described complications. Although nutritional supplementations are often initiated after bariatric surgery, the clinical outcomes related to the deficiency of trace elements have not been well known yet.
Case Presentation: A 27-year-old woman who underwent a laparoscopic sleeve gastrectomy for surgical treatment of obesity 9 months ago presented to the emergency department with a signs of heart failure. Transthoracic echocardiography revealed dilated, poorly functioning left ventricle with reduced ejection fraction (28.9%) consistent with dilated cardiomyopathy. We assumed nutritional deficiencies secondary to sleeve gastrectomy as a cause of dilated cardiomyopathy, as the patient had inappropriate nutritional supplements after surgery. Laboratory tests revealed selenium and zinc deficiency that supported our hypothesis. Our patient completely recovered with adequate supplementation of selenium, zinc and thiamine.
Conclusion: We highlighted that the early diagnosis of dilated cardiomyopathy due to selenium deficiency following bariatric surgery is of great importance since selenium deficiency is a cause of reversible cardiomyopathy.

Dilated cardiomyopathy (DCM) is an important cause of heart failure and identifying the underlying etiologies of DCM is the greatest challenge for clinical practice. In the literature, DCM secondary to selenium deficiency has rarely been reported in patients with biliopancreatic diversion (Scopinaro procedure) [1]. However, the development of DCM related to selenium deficiency has also been observed in patients who performed sleeve gastrectomy for treatment of obesity. Herein, we aim to present a case of DCM related to selenium deficiency and emphasize the importance of micronutrient supplements after obesity surgery.

A 27-year-old woman presented to the emergency department with a temporary loss of consciousness, progressive dyspnea on exertion and bilateral lower extremity swelling lasting for a month. Detailed medical history revealed that she underwent a laparoscopic sleeve gastrectomy with duodenal-ileostomy for surgical treatment of obesity 9 months ago. After surgery, she did not have an appropriate follow-up and no postoperative nutritional supplementations were initiated by the primary surgeon. The patient did not have additional chronic diseases and also denied the use of any medications, illicit drugs or alcohol. On physical examination, the patient was conscious, arterial blood pressure (ABP) was 70/40 mmHg, heart rate was 98/min, respiratory rate was 16/min and she had a body temperature of 37.7°C. Oxygen saturation was 95% on ambient air. There was an S3 and grade 2/6 systolic murmur at the cardiac apex. The pulmonary exam was remarkable for bilateral rales and diminished breath sounds at the lower lung zones. There was pitting edema in the lower extremities. Electrocardiogram showed sinus tachycardia and myocardial enzymes were elevated (troponin T: 0.23 ng/ml). Transthoracic echocardiography (ECHO) revealed dilated, poorly functioning left ventricle with reduced ejection fraction (28.9%) consistent with dilated cardiomyopathy (DCM) (Figure 1). Thorax computed tomography (CT) scan showed bilateral pleural effusions and areas of consolidation. 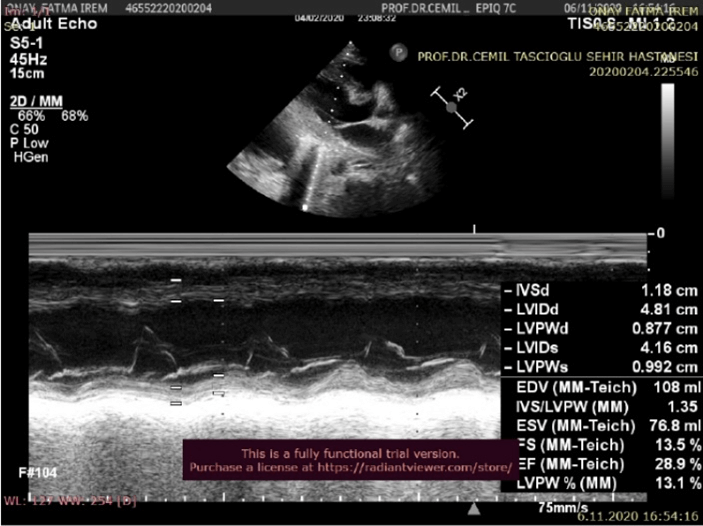 The patient was managed with continuous intravenous noradrenaline infusion and loop diuretics for the treatment of cardiac decompensation. Peripartum cardiomyopathy, infectious etiologies (hepatitis B and C, human immunodeficiency virus, human herpes virus, cytomegalovirus), diabetes mellitus, the thyroid and connective tissue disorders were excluded according to clinical and laboratory evaluation. There was also no exposure to a toxic substance that could cause DCM. The patient has no family history of premature heart disease or other organ failures suggestive of hereditary metabolic disorders. Because there was an inappropriate postoperative nutritional supplementations, we assumed nutritional deficiencies and measured the levels of trace elements and without waiting results of laboratory analysis, we initiated treatment of selenium 100mcg/day, zinc 50 mg/day, folic acid 5 mg/day, provitamin A (ß-Karoten) 40 mg/day, vitamin E 400mg/day, vitamin C (Ascorbic acid) 400 mg/day. The serum thiamine level couldn’t be studied for technical reasons. Measurement of selenium and zinc levels was completed one week after initiation of serum therapy and were indicative of a selenium and zinc deficiency (Serum zinc level was 0.67 ug/mL (reference range, 0.7 to 1.3); serum selenium level was 23.81 ug/L (reference range, 63 to 160). The patient was diagnosed with dilated cardiomyopathy due to acquired selenium deficiency.

After one week of selenium administration, we observed a slight improvement in clinical symptoms and arterial blood pressure (ABP) remained within normal range without vasopressor support. The patient’s chest radiograph showed a normal cardiothoracic index. The patient’s symptoms related to decompensated cardiac failure improved dramatically at the end of the third week. ECHO that was performed three months later displayed a normal left ventricular ejection fraction of 60%. We planned selenium repletion treatment for six months at 100 mcg/daily. Written informed consent was obtained from the patient for publication of this case.

Different etiologies can lead to DCM but in many cases, the etiology of DCM remains unclear. We reported a rare case of reversible DCM due to selenium and thiamine deficiency and highlighted that trace elements, especially selenium, should be considered as possible causes of DCM after metabolic surgery. Trace elements such as selenium, zinc and copper have an important role in myocardial metabolism and especially low serum selenium may play an important role in the pathogenesis of DCM. Selenium-responsive DCM, also known as Keshan disease, is an entity but can be fatal unless a necessary selenium supplement is given [2]. The laparoscopic sleeve gastrectomy is increasingly being performed due to lower operation-related complications than gastric bypass surgery. However, the deficiency of trace elements, fat-soluble and water-soluble vitamins have been described in relation to all bariatric surgeries [3]. Selenium deficiency has been mostly reported in patients following a Roux-en-Y gastric bypass and biliopancreatic diversion with duodenal switch procedure, respectively [1].

Selenium-induced DCM is recognized as a reversible cardiovascular impairment. Thus when the selenium deficiency is suspected as a potential cause of DCM, adequate and aggressive replacement therapy should be initiated without waiting for test results in order to achieve a rapid clinical improvement. Recommended dose of selenium intake for 19-50 years of age is 55 mcg/day for men, 55 mcg/day for women (pregnant: 60 mcg/day, lactation: 70 mcg/day) [4]. Although nutritional supplementations are often initiated after bariatric surgery, the clinical outcomes related to the deficiency of trace elements have not been well known yet. There have been reported only a few case reports of DCM developed after bariatric surgery. In one of the cases, the patient completely recovered with adequate supplementation as presented in our case [5]. In the other case, there had been a surgical reversal of the bariatric surgery because of lack of improvement with conservative treatment [6].

We hope that our case will draw attention to the risk of developing of DCM due to selenium deficiency in patients undergoing bariatric surgery. Since the cardiomyopathy associated with selenium deficiency is reversible and result in complete clinical recovery, early diagnosis, therefore, is of paramount importance.

The data that support the findings of this study are available from the corresponding author, upon reasonable request.

The study was performed in accordance with the ethical standards as laid down in the 1964 Declaration of Helsinki and its later amendments.

Informed consent regarding publishing their data was obtained from each patient.

Informed consent was obtained from all individual participants included in the study.

© 2021 Gulay Kocak. This is an open-access article distributed under the terms of the Creative Commons Attribution License, which permits unrestricted use, distribution, and reproduction in any medium, provided the original author and source are credited. Hosting by Science Repository. All rights reserved.
DOI: 10.31487/j.SCR.2021.08.20