Melanomas are highly malignant tumors that account for 1%~3% of all malignant cancers, and the majority of them are of cutaneous origin. There are approximately 132000 newly diagnosed cases and approximately 48000 patients who die annually from this disease worldwide. Only 0.8%~3.7% of melanomas are mucosal melanomas, which are not well understood, particularly with respect to those that occur in the mucosa of the gastrointestinal tract [1, 2]. Despite their rarity, mucosal melanomas are of great interest due to their aggressive behaviour and less favourable prognosis compared to cutaneous melanomas [2]. Moreover, melanomas of the gastrointestinal tract are mostly metastatic, presenting along with the primary tumor or years later [3]. The most frequent locations of metastasis are the small intestine, colon, and stomach. Primary mucosal melanoma arises in any site of the gastrointestinal tract, but it is most common in the anorectal (31.4% in the anal canal and 22.2% in the rectum) and oropharyngeal (32.8%) regions, while the oesophagus (5.9%), stomach (2.7%), small intestine (2.3%), gallbladder (1.4%) and large intestine (0.9%) are rare sites of origin [4].

In recent decades, a large amount of research has been dedicated to factors that possibly affect the OS of patients with mucosal melanomas, including the tumor position, depth of invasion and presence of metastasis [9]. Nevertheless, literature on specific elements such as pathological signs and therapeutic methods that affect the prognosis of mucosal melanomas in the gastrointestinal tract is limited. In this paper, we describe a retrospective study performed to investigate the characteristics and prognosis of gastrointestinal mucosal melanomas in a Chinese population to help future clinicians recognize the prognosis of this disease.

We collected the following data from our patients: sex, age, condition of the primary or metastatic tumor, tumor location, number of lesions, initial symptoms, distant metastasis, lymph node metastasis, expression of Melan A in tumor cells, and treatments they received. Tumors with no prior history of cutaneous, mucosal, or uveal melanoma were categorized as primary tumors, while tumors that did not meet these criteria were categorized as metastatic tumors. Tumor location represents the location of the lesion in the gastrointestinal tract when the patient was first diagnosed with gastrointestinal mucosal melanomas. The upper gastrointestinal tract includes the oral cavity, pharynx, oesophagus, stomach, and duodenum. The lower gastrointestinal tract includes the jejunum, ileum, caecum, vermiform appendix, colon, rectum, and anal canal.

The number of lesions, which was proven via the imaging data when the patients were first diagnosed with gastrointestinal mucosal melanomas, was classified as single or multiple (more than one lesion). Moreover, in our study of Melan A (immunohistochemical analysis), sections were incubated overnight at 4°C in humidified chambers with a primary antibody against Melan A (ZM-0398; ZSGB-BIO, Beijing, China) and then washed in phosphate-buffered saline (PBS) three times for 5 minutes. Next, sections were treated with a secondary antibody and then incubated with 3,3’-diaminobenzidine (DAB) chromogen. Finally, sections were washed in PBS and lightly counterstained with haematoxylin to reveal nuclei. A negative control was generated by replacing the specific primary antibody with nonimmune serum immunoglobulins.

Lymph node metastasis was defined via imaging data. Distant metastasis was defined as a gastrointestinal lesion that had metastasized through the blood vessels or lymph vessels to other organs and was determined from the patients’ imaging data. Having received treatments meant that the patients had received targeted treatments, including surgery and/or adjuvant therapy, rather than having received symptomatic treatments only or having not received any treatments. Furthermore, in this retrospective study, data such as patient characteristics that could not be certified were classified as ‘unspecified’.

The standard follow-up protocol in our study included a whole-body CT and physical examination every 3 months for 2 years, then every 6 months until 5 years, and then annually after the patients were diagnosed with gastrointestinal mucosal melanomas. The cut-off follow-up date of this study was 26 November 2020. However, 8 of the 49 patients rejected follow-up (censored). The OS was calculated from the time of pathologic diagnosis to the date of death from any cause or the date of the last follow-up.

All analyses were performed with the Statistical Package for Social Sciences V24.0 (SPSS Inc., IL, USA). All data was collected as categorical variables and was described in the form of a number (percentage). Multivariate analyses of prognosis and OS were performed using the Cox proportional hazards model [10, 11]. All the tests were two-sided, and a p-value less than 0.05 was considered statistically significant.

A summary of the clinical characteristics of the 49 patients with gastrointestinal mucosal melanomas we studied is shown in (Table 1). Generally, 19 (38.8%) patients were males, and 30 (61.2%) were females; the median age of our patients when they were first diagnosed with gastrointestinal mucosal melanomas was 58 (range from 29 to 81) years; 43 (87.8%) were primary tumors, while 6 (12.2%) were metastatic tumors, and all of the metastatic gastrointestinal mucosal melanomas of our patients metastasized from the skin; and 28 (57.1%) patients had a single tumor, while 7 (14.3%) had multiple lesions (14 were unspecified due to a lack of imaging data). Regarding the location of the lesions, most (49%) were located in the rectum, and the others were located in the anal canal (35%), small intestine (10%), and stomach (6%). In terms of treatments, 19 (38.8%) patients received only surgery, while 17 (34.7%) received both surgery and chemotherapy as adjuvant therapy. Moreover, one patient (2.0%) received only thermotherapy, and 12 (24.5%) did not receive any treatment for various reasons.

The OS duration of our patients ranged from 2 months to 90 months, and the median OS was 22 months. However, 8 patients were lost to follow-up after diagnosis; thus, they were excluded from the survival analysis.

The mean and median OS of gastrointestinal mucosal melanoma patients with different characteristics are shown in (Table 3). The OS curves according to the condition of the primary and metastatic tumors and different tumor locations were generated using the Cox proportional hazards model and are shown in (Figures 1 & 2). 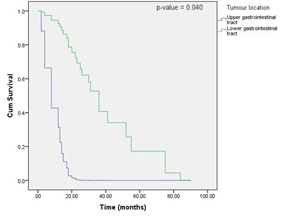 In this study, we retrospectively examined the correlation between the clinical characteristics and prognoses of Chinese patients with gastrointestinal mucosal melanomas to identify factors associated with OS. The condition of the primary or metastatic tumor and tumor location were found to be the independent factors that affected the prognosis of patients with gastrointestinal mucosal melanomas. With respect to the condition of the primary or metastatic tumor, another study showed that the prognosis was worse for primary intestinal melanomas, which tend to grow faster and more aggressively [14, 15]. We drew a similar conclusion in this study. But it still needs further study to find the reason for this. Certainly, when a mucosal melanoma is detected, a total body skin examination is paramount to rule out a primary cutaneous melanoma that has metastasized [8]. Therefore, we suggest that clinicians, especially when facing patients with melanomas, review the potential primary lesions at the location they were first discovered. A thorough examination of the potential primary lesions may also help future researchers to draw a more accurate result.

However, since we examined only 49 patients (the former study enrolled 121 cases in the gastrointestinal tract, while the latter study enrolled 226 cases), the small sample size may cause the potential bias [9, 15]. What is more, the patients involved in the former study were all in German population, and the latter study did not illustrate which population their cases came from. As all the patients in this study were collected from a Chinese population, the races and customs may also cause the differences in our conclusions. Further studies on a larger number of patients with gastrointestinal mucosal melanomas are needed to confirm the conclusion of our study. Other important epidemiological factors for many diseases, such as sex, age, number of lesions, initial symptoms, distant metastases, lymph node metastases, and immunohistochemical indexes, as well as the condition of treatments were found not to be independent prognostic factors of our patients.

A previous study demonstrated that sex was a significant prognostic factor, with the male sex being associated with worse OS than the female sex for mucosal melanomas in the gastrointestinal tract, which was similar to other published studies noting sex as an independent prognostic factor associated with both cutaneous and mucosal melanomas. It is notable that hormonal influences have been postulated to play a role in the sex effect [16]. Nevertheless, in this study, we did not find that sex was significantly associated with the OS of our patients. The small number of patients examined, and race differences may account for this difference.

The present study can also be criticized for the following limitations. We selected patients who received a pathological diagnosis of gastrointestinal mucosal melanomas. While some of the pathological sections were obtained from an outpatient consultation, we did not have complete data for certain variables potentially related to the prognosis of patients with gastrointestinal mucosal melanomas, such as tumor thickness and ulceration, which seem to be the dominant prognostic factors of cutaneous melanomas according to the staging system [12]. Moreover, the retrospective review of data is associated with inherent selection bias for treatment plans depending on the treatment providers and other disease factors. In addition, due to the loss of follow-up information, we did not obtain the OS data for some of our patients. These limitations may have influenced our results.

Moreover, melanoma is a disease with high ethnic variations [13]. Distinct racial and geographic differences are observed in mucosal melanomas, as they are in cutaneous melanomas [2]. There may be some differences between our study and others that may be attributed to unique environmental factors specific to geographic locations and variation in genetic and ethnic backgrounds. Whether our results can be applied to other regions and ethnic groups remains to be further explored. Although the sample size of our study was small and the results may have been affected by the various factors mentioned above, this study is expected to provide some clues for future exploration that will help clinicians improve the accuracy of judging prognosis.

The authors state that they have followed the principles outlined in the Declaration of Helsinki for all investigations.

The requirement for individual consent for this retrospective analysis was waived.

All data generated or analysed during this study are included in this published article.

© 2021 Manxia Lin. This is an open-access article distributed under the terms of the Creative Commons Attribution License, which permits unrestricted use, distribution, and reproduction in any medium, provided the original author and source are credited. Hosting by Science Repository. All rights reserved.
DOI: 10.31487/j.SCR.2021.07.04