A Giant Pre-Peritoneal Lipoma: A Report of an Uncommon Presentation of a Rare Entity and a Review of the Literature

Background: A lipoma is one of the commonest benign tumors in surgical practice. Lipomas are usually found on the trunk and limbs but less commonly within the abdomen, where they occur frequently in the mesentery as well as the subserosa and submucous layer of the gastrointestinal tract. Pre-peritoneal lipomas are rare.
Case Presentation: A 44-year-old woman presented with a painless and progressive right-sided abdominal swelling of 5 months duration. Examination revealed a 16cm x 14cm slightly mobile and non-tender firm-to-hard hour-glass-shaped mass extending from the right hypochondrial to right iliac and the suprapubic regions. Abdominal ultrasonography showed a 5cm x 6cm bowel thickening in the right iliac fossa suggestive of an ileocecal mass while a computerized tomography showed a 20.8cm x 6.3cm x 20.1cm hypodense mass within the peritoneal cavity, extending from the epigastric region to the pelvis, anterior to the bowel loops and more to the right. At laparotomy, a huge, well encapsulated yellowish mass in the pre-peritoneal space, weighing 1,520g was excised. Histology confirmed a lipoma.
Conclusion: A preperitoneal lipoma is an uncommon soft tissue tumor and the giant ones are extremely rare. Although a rare cause of a painless abdominal swelling, pre-peritoneal lipoma should be considered as a differential diagnosis in patients presenting with an unremarkable feature suggestive of an intra-abdominal pathology.

Lipomas are benign tumors of mature adipose tissue commoner between the ages 40-60 years with a predilection for the male gender [1]. Lipomas may be solitary or multiple, superficial or deep in location and are usually painless. Painful lipomas may be multiple (Dercum’s disease) or solitary in which case pain is usually due to a torsion. Superficial lipomas occur commonly in the trunk, head and neck regions and the limbs where cosmetic concerns or pain are indications for their removal. The relatively uncommon deep-seated lipomas occur in the thorax, retroperitoneum or abdominal cavity [2]. Intra-abdominal lipomas usually affect the omentum, mesentery, the submucosa and subserosa of the gastrointestinal tract [3]. Involvement of the preperitoneal layer of the anterior abdominal wall is rare with only 8 cases reported so far in the literature (Table 1) [4-11]. Sanchez et al. defined a giant lipoma as one that is at least 10cm in diameter or at least 1000g in weight [12]. Only 1 case of a giant lipoma of the parietal peritoneum (LPP) has been reported by Choi et al. [11]. Because of its rarity, we are presenting this case of preperitoneal abdominal lipoma. This case is reported in line with the SCARE criteria for case reports [13].

Table 1: A summary of case reports on lipoma involving the parietal peritoneum.

A 44-year-old woman presented with a painless but progressive right-sided abdominal swelling of 5 months duration. She had no history suggestive of gastrointestinal bleeding or change in bowel habit. There was no preceding history of abdominal trauma or previous abdominal surgery. She had no personal or family history of malignancies. Examination revealed a full abdomen with an hour-glass-shaped, non-tender, slightly mobile mass extending from the right hypochondrial to right iliac regions and extending medially to the suprapubic region. It measured 16cm x 14cm. The mass was firm in consistency and extended below the pubic ramus. Vaginal and rectal examination findings were normal. 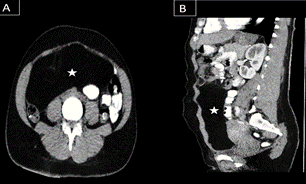 An abdominal ultrasonography that showed a 5cm x 6cm bowel thickening in the right iliac fossa suggestive of an ileocecal mass. A computerized tomography showed a 20.8cm x 6.3cm x 20.1cm hypodense mass within the peritoneal cavity, extending from the epigastric region to the pelvis, anterior to the bowel loops and more to the right. It had multiple thin internal non-enhancing linear densities in keeping with fibrous septations (Figures 1A & 1B). At exploratory, the findings were an encapsulated giant pre-peritoneal yellowish soft mass with a thin capsule attached to the umbilicus by a short stalk (Figure 2A). The parietal peritoneum which formed the capsule of the mass was opened (Figure 2B) and the mass was completely excised. The resected specimen (Figure 2C) weighed 1,520g and measured 20cm x 6cm x 18cm. She was discharged home on the 4th post-operative day. Histology of the resected specimen (Figures 3A & 3B) showed a lipoma. She remains in good condition 6 months post-operatively. 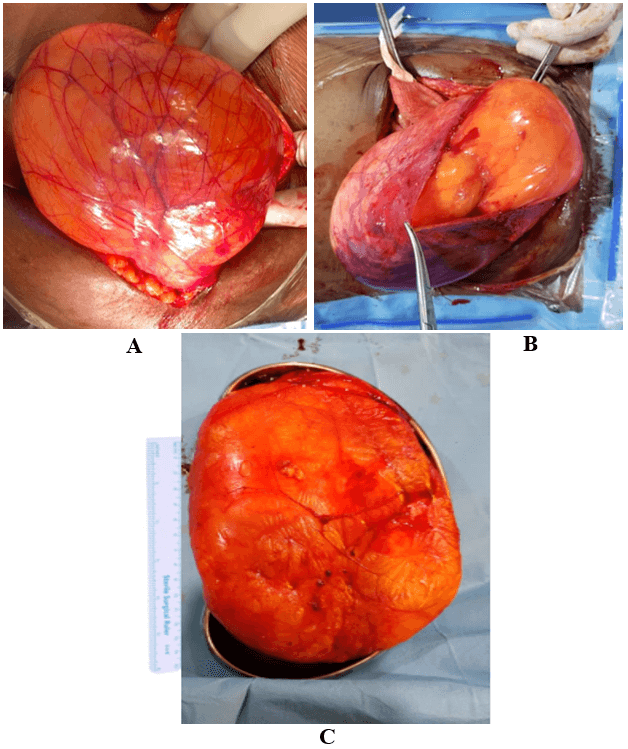 Figure 2: Intra-operative findings: A) Mobilization of the giant mass. B) Opening of the thin capsule of the mass prior to excision. C) Resected specimen. 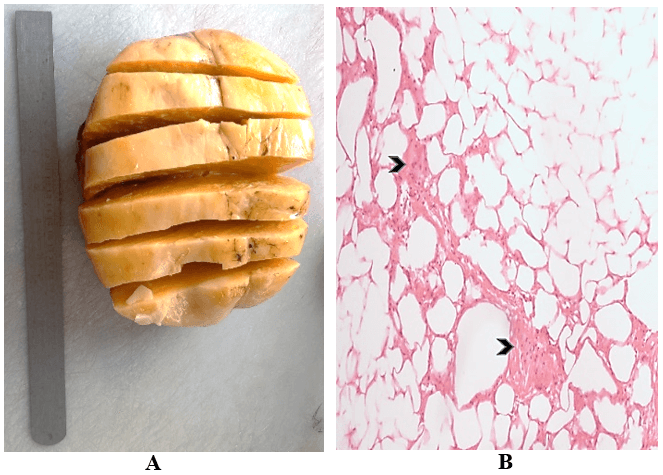 Lipomas are one of the commonest superficial lumps in surgical practice, especially the subcutaneous lipomas [14]. Deep-seated lipomas are unique in being obscure, at higher risk of malignant transformation and rare [15-17]. The incidence of LPP is rare with only 8 cases reported in the literature. Out of these, 7 cases presented with an abdominal pain while the remaining case presented with urinary frequency (Table 1). We had a case of a painless giant pre-peritoneal lipoma that presented with progressive abdominal swelling.

Although a slight predilection for males had been noted in the developed clime, recent studies done locally showed a slight female preponderance, similar to reports about 3 decades ago [18-21]. Lipomas are usually asymptomatic in nature. Patients only present when pain or cosmesis becomes a concern. This insidious nature of presentation makes them unnoticed especially when deep-seated, manifesting only when they grow big enough to cause pain or when there is a torsion of even a small but pedunculated lesion. Other patients had features of urinary frequency [11]. Our patient is the first where an obvious abdominal swelling was the only presenting feature of an LPP. Lipomas grow slowly over time except there is a malignant transformation. Yet the duration of symptom in our patient was just 5 months for a lesion that well qualifies as a giant lipoma. One explanation for this is the deep nature of the lesion and the fact that it was not torsed.

Whilst the diagnosis of superficial lipomas can be made clinically, that of deep-seated lipomas requires an extreme level of suspicion. Clinical manifestations depend on the size and location of mass. Symptoms are few or absent. Pain may be caused by partial or complete intestinal obstruction, torsion or volvulus. Ultrasonography depicts these intra-abdominal lipomas as well-defined homogeneous, echogenic masses. Computed tomography depicts intraabdominal lipomas as masses with low attenuation like adipose tissue. In most cases, the diagnosis is made intra-operatively, as seen in the previous case reports, including ours. In this patient we considered a diagnosis of Ileocecal malignancy which is the commonest cause compared to other causes painless right-sided abdominal swelling (ileocecal tuberculosis, Crohn’s disease, amoeboma, tubo-ovarian and renal pathology).

An important differential diagnosis of a lipoma is an atypical lipoma/well-differentiated liposarcoma which is known to possess similar features with a giant lipoma: they both have a variable consistency, are usually non-tender, and both show positivity for vimentin and S-100 protein on immunostaining [22]. Molecular testing has been recommended by Zhang et al. for relapsing lipomas, lipomas with cytologic atypia and large lipomatous tumors (>15cm) without cellular atypia like ours [23]. However, molecular evaluation is not readily available in many developing countries. Hence, the possibility of these lesions being malignant, especially the deep-seated ones, should always be considered. Consequently, complete surgical excision of such lesions should be performed. This reduces the possibility of relapse, if the histopathological examination suggests a malignancy. To the best of our knowledge, the only case of a giant LPP in the literature was reported by Choi et al. which measured 22 x 16 x 7.5cm and weighed 942g [11]. Our report is the second reported case of a giant LPP and the first with a weight of up to 1,520g.

It is noteworthy from the case reports under this review that adipose tissue tumors of the parietal peritoneum are usually pedunculated, situated in the right lower quadrant of the parietal peritoneum of the anterior abdominal wall, amenable to complete excision with good post-operative outcome and are usually benign. We postulate that the weight of the lipoma on the thin parietal peritoneum in supine position and the effect of gravity in erect position may explain the pedunculated nature and predilection of LPP for the lower abdomen respectively, but not the right-sided preponderance.

A preperitoneal lipomas is an uncommon soft tissue tumor and the giant ones are extremely rare. Although a rare cause of a painless abdominal swelling, a pre-peritoneal lipoma should be considered as a differential diagnosis in patients presenting with an unremarkable feature suggestive of an intra-abdominal pathology.

Each of the authors has significantly contributed to the design, data acquisition and analysis, data interpretation and final editing of the submitted manuscript.

A written informed consent was obtained from the patient to report this case.

© 2021 Ulasi Ikechukwu Bartholomew. This is an open-access article distributed under the terms of the Creative Commons Attribution License, which permits unrestricted use, distribution, and reproduction in any medium, provided the original author and source are credited. Hosting by Science Repository. All rights reserved.
DOI: 10.31487/j.SCR.2021.07.13

Table 1: A summary of case reports on lipoma involving the parietal peritoneum.

Figure 2: Intra-operative findings: A) Mobilization of the giant mass. B) Opening of the thin capsule of the mass prior to excision. C) Resected specimen.