Abdominal pain after Roux-en-Y gastric bypass is an important potential complication. Perforation of an ulcer in the excluded duodenum is a rare occurrence in a patient who has undergone gastric bypass. We present a case of a 61-year-old female with a history of Roux-en-Y gastric bypass, who presented with acute right upper quadrant abdominal pain, which began 1 week after starting treatment with ibuprofen. The evaluation revealed tachycardia, epigastric/right upper abdominal tenderness and leukocytosis. CT abdomen without contrast, ultrasound examination and nuclear medicine scan of the gallbladder were unremarkable. Upper endoscopy revealed an ulcer just distal to her gastrojejunostomy. At exploratory laparotomy, a well-contained perforation was identified on the anterior duodenal bulb. The perforated ulcer was debrided, the intestine closed with sutures and a drain was left in the abscess cavity. Conventional endoscopic access to bypassed duodenum and stomach is difficult after gastric bypass. In this case, the patient ingested oral ibuprofen and developed both a marginal ulceration as well as an ulceration of the excluded duodenal bulb. The latter finding is consistent with a nonsteroidal anti-inflammatory drug side-effect developing via a hematogenous exposure.

The rising prevalence of overweight (Body Mass Index or BMI ≥ 25 kg/m2) and obesity (BMI ≥ 30 kg/m2) in more than 100 countries has been described as a global pandemic [1-3]. Greater than one-third of U.S. adults (34.9%) and approximately 17% (or 12.7 million) of children and adolescents aged 2 to 19 years are obese [4]. Roux-en-Y gastric bypass (RYGB) (Figure 1) remains a commonly performed bariatric surgery worldwide [5]. A 2016 survey revealed that RYGB was the primary bariatric surgical procedures in 191,326 individuals, and thus was the primary bariatric procedure in 30.1% of all patients [5]. Abdominal pain after RYGB is an important potential complication and diagnostic considerations for a presentation of acute upper abdominal pain after RYGB include the presence of cholecystitis, torsion of the jejunojejunal anastomosis, as well as ulceration at either the gastrojejunostomy or the jejunojejunostomy [6]. Perforation of ulceration in the excluded gastroduodenum is a rare occurrence in patients who have undergone RYGB and in a literature review, twenty-three case studies have been identified [7-17]. We present herein a case of a perforated duodenal ulcer with contained abscess after a remote RYGB.

A 61-year-old female was referred to our institution from an outside emergency room for the complaint of acute abdominal pain. In her history, she had noticed upper abdominal pain for 1 to 2 days. This abdominal pain was a constant, dull aching, moderate to severe in intensity and associated with nausea, vomiting and subjective chills. She also stated that she had begun taking ibuprofen 800 mg by mouth 2-3 times daily for joint pain one week prior to the onset of abdominal pain. She denied any prior episode of similar symptoms. Her past medical history was significant for hypertension, and surgical history included RYGB 16 years prior to presentation and a hysterectomy 6 years prior to presentation. She was not taking any medications other than the ibuprofen and denied active smoking, alcohol intake or illicit drug use. 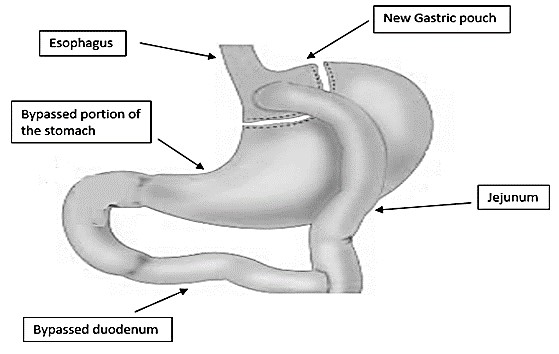 On physical examination, this morbidly obese woman had tachycardia with a pulse rate of 105, but she was afebrile with stable blood pressure and respiration. She had epigastric/right upper abdominal tenderness and a reducible ventral hernia. No guarding or rebound tenderness was noted. Initial labs, including blood chemistry, liver test and serum amylase, were normal, but leukocytosis was found (white blood count 19,000; 87% neutrophils). CT scan of the abdomen without contrast, from the outside emergency room, revealed a stool-filled colon and a small ventral hernia. Ultrasound examination revealed pericholecystic fluid but no cholelithiasis. HIDA scan of the gallbladder was normal, with a calculated ejection fraction of 52% (1 hour after oral intake of fat). She underwent an upper endoscopy, which showed a 1 cm by 1 cm marginal ulceration just distal to the gastrojejunal anastomosis with no stigmata of bleeding. The esophagus, stomach pouch, blind jejunal limb and the alimentary jejunal limb appeared normal.

The severity of upper abdominal pain, her examination and particularly the leukocytosis were not explained by the gastrojejunal ulceration. She was therefore taken to the operating room for exploratory laparotomy. Dense adhesions were encountered. The gallbladder was soft and grossly normal in appearance. There was bilious and purulent fluid in the RUQ. On the anterior duodenal bulb, a perforation was identified, which was well contained (Figure 2). The perforated ulceration was debrided, and the intestine closed with sutures; a drain was left in the abscess cavity. The ventral hernia was repaired primarily. The fluid around the gallbladder noted on imaging was due to the abscess cavity fluid surrounding the gallbladder wall, causing an inflammatory response. After consultation with a bariatric surgeon and after evaluation to ensure that no mesenteric defect was present, it was decided not to proceed further. Postoperatively, she received empiric triple-antibiotic medical therapy for gastric Helicobacter pylori. The culture of the abscess grew polymicorbial flora and the histopathology of the ulcer and the abscess cavity was consistent with necrosis without any signs of malignancy. She was discharged on a soft diet and a daily proton pump inhibitor. She was seen in the outpatient clinic 2 weeks after hospital discharge (4 weeks after surgery) and she was in good health. 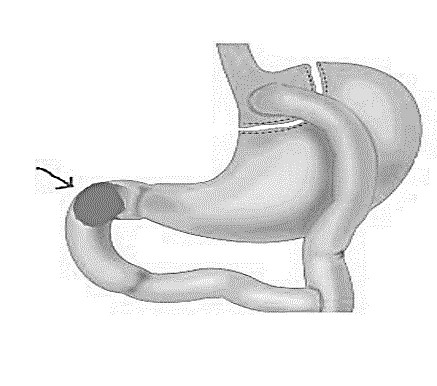 Figure 2: Schematic cartoon depicting the location (arrow) of the duodenal ulcer with perforation.

The pathophysiology of duodenal ulcer formation in relation to the gastric bypass procedure is not entirely clear. Multiple factors may be involved in the pathogenesis of ulcer disease. The two predominant non-malignancy related causes are nonsteroidal anti-inflammatory (NSAID) drug ingestion and gastric H. pylori infection. Injury to the mucosa may occur as a result of the topical encounter with NSAIDs through mechanisms such as direct cell injury, altered surface mucous layer, and promotion of back diffusion of H+ and pepsin. However, severe mucosal injury can commonly occur even without topical contact with an NSAID [18]. Prostaglandins play a critical role in maintaining gastroduodenal mucosal integrity and repair. NSAID-induced interruption of prostaglandin synthesis and increased oxidative stress induced by NSAIDs, which can be blocked by a H,K-ATPase inhibitor, are potential mechanisms that might impair mucosal defense and repair, thus facilitating mucosal injury via a systemic mechanism [19, 20]. It has been noted in prior reports that parenterally administered NSAIDs, such as Ketorolac, can induce upper gastrointestinal ulceration; therefore, oral ibuprofen could also induce ulceration in the bypassed gastroduodenum via hematogenous exposure [18].

Other mechanisms may play a role in addition to these two major risk factors. Studies have supported the notion that peptic ulcers in symptomatic patients following laparoscopic bariatric surgery are related to surgical procedures rather than exposure to H. pylori infection [21]. It has also been postulated that after gastric bypass, gastric acid is no longer neutralized by food in the excluded stomach and duodenum, as in individuals with normal anatomy. In addition, a delayed release of bicarbonate from the pancreas could permit the mucosa to be exposed to the gastric acid for a prolonged period. The diagnosis of ulcers in the bypassed gastroduodenum can be challenging. Imaging may be of limited utility. In most of the cases, pneumoperitoneum will not be identified since ingested air would preferentially flow through the alimentary limb rather than retrograde into the excluded duodenal and stomach. CT scan seems to be the preferred imaging to demonstrate free peritoneal fluid and inflammation in the right upper quadrant and epigastric region; and more importantly, to rule out other common causes of acute abdominal pain. Conventional upper endoscopy is usually not fully diagnostic after Roux-en-Y bypass of the anatomic rearrangement, and the difficulty in visualizing the excluded limb, even with specialized instruments, has been well recognized [16, 17, 22, 23].

Given the rarity of the condition, no true gold standard for preoperative diagnosis exists. Surgery remains the mainstay for diagnosis of and treatment of such duodenal perforations. Nonoperative management with percutaneous drainage has also been successful and may be an option in the appropriately chosen patient [7-15]. Another very important question is whether to proceed with surgical resection of the excluded stomach and the first portion of the duodenum. Although resection of the bypassed stomach would obviate the potential for complications such as perforation, bleeding or malignancy in the future, this major surgery is not without consequences. Subtotal gastrectomy prolongs the operative time during the management of an acute process and could lead to future bacterial overgrowth in the pancreaticobiliary limb of jejunum, a biliary leak, and long-term worsening of vitamin deficiencies [13].

Due to the obesity pandemic, the number of primary bariatric surgical procedures is expected to continue to rise. Abdominal pain after RYGB is an important potential complication. Conventional endoscopic access to bypassed duodenum and stomach is difficult after RYGB and so ulceration of the bypassed gastroduodenum may be missed in those individuals whose ulceration is the result of hematogenous exposure to an NSAID drug. With the increasing number of bariatric procedures, including RYGB, and the proportional increase in the number of long-term complications, there remains a need for additional studies to delineate the mechanisms of ulcer formation after RYGB and to standardize the diagnostic and management approaches.

© 2019 Timothy Koch. This is an open-access article distributed under the terms of the Creative Commons Attribution License, which permits unrestricted use, distribution, and reproduction in any medium, provided the original author and source are credited. Hosting by Science Repository. All rights reserved.
DOI: 10.31487/j.AJSCR.2020.03.04

Figure 2: Schematic cartoon depicting the location (arrow) of the duodenal ulcer with perforation.