Deep Vein Thrombosis (DVT) is a common treatment-related complication following surgery and chemotherapy. We are reporting a case of colorectal cancer-associated thrombosis during platinum-based chemotherapy. The patient was treated with Rivaroxaban (Xarelto), a highly selective direct Factor Xa inhibitor. This case report highlights the concurrent use of novel oral anticoagulants, which does not interrupt the chemotherapy schedule among patients receiving cytotoxic agents.

Solid cancer treatment modality includes surgery, chemotherapy, radiation, and targeted therapy [1]. One of the major treatment-related complications is cancer-associated thrombosis (CAT). CAT is an umbrella which includes Venous thromboembolism (VTE) event such as deep vein thrombosis (DVT) and pulmonary embolism (PE); which are known to be a leading cause of mortality patients with solid cancer [2, 3]. Additionally, chemotherapy, immobilization, comorbidities, surgery, and increasing age are known to VTE risk among cancer patients [4]. Besides, patients receiving chemotherapy are at 6.5times of higher risk of developing VTE compared to non-cancer patients, with higher risk have been reported among patients receiving Platinum-based chemotherapy [2, 5]. Traditionally, Vitamin K antagonists such as Warfarin have been the treatment benchmark for VTE treatment [6]. However, warfarin use among cancer patients receiving chemotherapy is limited, as its administration is associated with increased recurrent VTE events and bleeding tendency [3]. Furthermore, International Normalized Ratio (INR) levels of cancer patients have been reported more diverse than non-cancer patients [6]. In addition, the use of Warfarin requires additional coagulation profile monitoring and frequent medical assessment, which burdens cancer patients who need to travel frequently for their chemotherapy treatment [3, 6].

Another anticoagulation treatment recommended treatment by the American College of Chest Physicians (ACCP) for cancer patients is low molecular weight heparin (LMWH), such as enoxaparin and tinzaparin, which have been reported to reduce recurrent VTE and bleeding events compared with warfarin [4, 7]. However, the poor compliance and incorrect technique of subcutaneous injection LMWH had affected the efficacy of the treatment [8]. Recent novel oral anticoagulants (NOACs) agents have been reported to be a suitable replacement for LMWHs. Agents such as Rivaroxaban and Dabigatran have shown comparable efficacy and safety in treating VTE [8-10]. The Select-D randomized trial reported a reduction in recurrent VTE and no differences in the major bleeding events among patients receiving NOACs compared to LMWH [8, 9]. The latest ASCO Clinical Practice Guideline has recommended Rivaroxaban to treat VTE in cancer patients to reduce VTE recurrence [10]. Rivaroxaban is a direct factor Xa inhibitor, a derivative of oxazolidone that can stop free factor Xa bind to prothrombinase complex [11]. This binding will disrupt intrinsic and extrinsic pathways of coagulation cascade; thus, inhibit factor II change to factor IIa to prevent fibrin formation [11]. Similarly, the use NOACs as first line are becoming more prominent as a treatment choice for CAT in clinical due to ease of administration and monitoring [12, 13].

However, using NOACs such as Rivaroxaban to treat VTE events during chemotherapy is extremely limited, evident from the lack of published information [12]. There was a general lack of efficacy and safety study comparing LMWHs and NOACs and NOACs usage in CAT patients. We are reporting a case of VTE treatment using Rivaroxaban, a highly selective direct Factor Xa inhibitor, concurrently during Platinum-based chemotherapy treatment.

A 58-year-old man with underlying diabetes mellitus and dyslipidemia presented with constipation, abdominal discomfort, and melena for two weeks. The patient’s colonoscopy observed a mass of 15-25cm with a sessile polyp at 80cm from the anal verge. Subsequently, the biopsy results reported tubular polyp adenoma with low-grade dysplasia suggestive of adenocarcinoma. The patient’s contrast-enhanced computed tomography of thorax, abdomen, and pelvis (CECT TAP) showed segmental sigmoid colon wall thickening without local invasion staging size of T2-T3 lesion with no evidence of local or distant metastasis. The patient underwent surgery for anterior resection of rectosigmoid carcinoma biopsy of the end resection was free from tumor involvement, with 1 of 13 lymph nodes showed evidence of metastasis. The patient’s final clinical diagnosis was rectosigmoid carcinoma stage pT3N1aMx.

Patients were started on 12 cycles of adjuvant Platinum-based FOLFOX regimen (Oxaliplatin, Leucovorin, and continuous Fluorouracil infusion). Patient chemotherapy administration was uneventful until the 4th cycle. Upon completing the 4th cycle, the patient complained of numbness at the left lower limb. His left lower limb was swollen, and his skin appeared pale. The initial impression was DVT and Doppler ultrasound on the left distal thigh and left middle thigh was done to confirm the diagnosis. The femoral vein from the upper thigh to the knee was non-compressible. The reduced blood flow from the distal to the middle thigh of the femoral vein was a suggestive feature of thrombosis. The left popliteal vein was also non-compressible, but no echogenic material was seen within. The result of the Doppler ultrasound concluded that the patient was diagnosed with left lower limb DVT. (Figures 1 & 2). 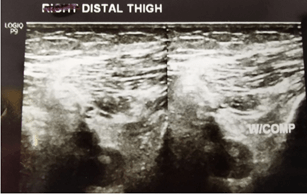 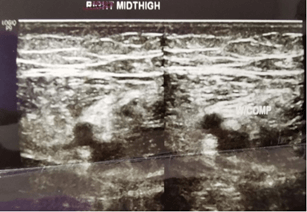 The patient was started with subcutaneous Enoxaparin 60mg two times daily according to American College of Chest Physicians (ACCP) guidelines [3, 7, 8]. However, the patient rejected treatment given the prolonged treatment duration required and hesitance of compliance to subcutaneous injection. Warfarin was ruled out due to few factors such drug-drug interaction with Fluorouracil, restriction of monitoring for chemotherapy patient and high bleeding risk in cancer patient [2, 3, 8, 14]. Pharmacists suggested NOACs such as Rivaroxaban (Xarelto) as a suitable replacement for this patient, and patients’ enoxaparin treatment was bridged to Rivaroxaban to improve compliance.

Pre-initiation of rivaroxaban treatment, baselines laboratory investigation of full blood count (FBC), renal profile (RP), liver function test (LFT), and coagulation profile (coag) such as international normalized ratio (INR), prothrombin time (PT), and activated partial thromboplastin time (aPTT) was obtained [11]. In view of the patient’s normal laboratory investigational result, the patient was started with Rivaroxaban 15mg twice a day for 21 days and continued with 20mg once a day for three months based on the DVT treatment recommendation dose [11]. Patients’ FBC, RP, LFT, and coag were within acceptable range after completion of 15mg twice a day for 21 days. Thus, the patient continued with a maintenance dose of 20mg once a day for three months. On the 8th cycle and two months post rivaroxaban treatment, patients complained of tingling sensation on both of his upper and lower limbs triggered by cold. The peripheral neuropathy was diagnosed as Platinum-induced side effects, and patients were prescribed with neurobion (vitamin B1, B6 & B12) as symptomatic treatment. The patient completed the remaining chemotherapy session without any event.

Doppler ultrasound was done upon completion of the rivaroxaban regime. Doppler ultrasound result post completed the regimen as shown below (Figures 3 & 4). On the repeated scan, the bilateral femoral vein from upper thigh to above knee appeared grossly patent, compressible, and absent of any DVT features. All monitoring parameters post rivaroxaban treatment post three months and were within the normal range. His edema also had resolved, and his peripheral neuropathy had resolved by completion of the rivaroxaban regimen. The patient did not complain of any other notable side effects. 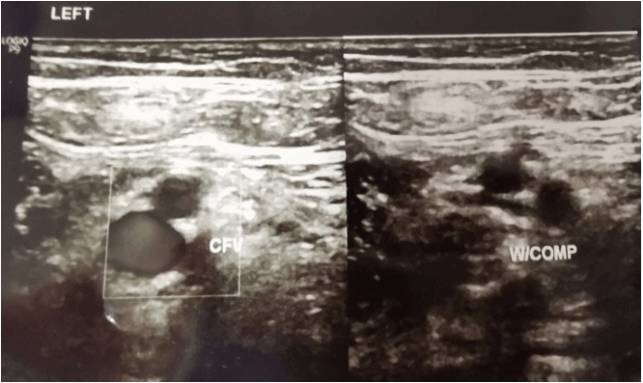 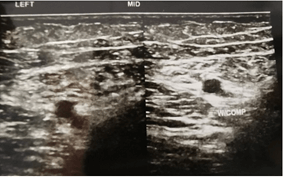 Chemotherapy treatment schedules are often disrupted with the incidence of VTE. The risk of VTE increases by 4.1-fold among cancer patients, and the administration of chemotherapy further increased the risk by 6.5-fold [2, 5]. Increasing age, post-surgery, immobility, and comorbidities further contribute to the increased risk of VTE event among cancer patients [2]. The patient reported by us have a few risks factor such as increased age, post-surgery, and received chemotherapy. However, the risk factor contributing to the incidence of DVT for this patient could not be established. The patient received FOLFOX regimen chemotherapy which included Oxaliplatin and 5-Fluorouracil. These agents have been reported to cause VTE events such as coronary thrombosis and upper extremities DVT in few studies, but the mechanism of how it caused VTE is not fully understood and well explained [5, 15]. Unfortunately, the treatment of the VTE event of the study above was not explained.

In addition, the use of Warfarin was contraindicated in our patient as he is on the FOLFOX chemotherapy regimen, which includes Fluorouracil [14, 15]. The mechanism of action for the interaction is unclear but may be related to the synthesis of hepatic cytochrome P-450 2C9 or a pharmacodynamics interaction with Warfarin [14]. As discussed in previously published case reports, a common response to this interaction is the discontinuation of Warfarin, Fluorouracil, or both. In this case, the Naranjo probability scale indicates a highly probable drug interaction between Warfarin and Fluorouracil [14]. LMWH, such as Enoxaparin and Tinzaparin, is a standard treatment of CAT [7]. However, the duration of SC injection of LMWH for at least 3-6 months has contributed to non-compliance in cancer patient patients [8]. We explored oral administration of anticoagulant agents as our patients expressed rejection for prolonged SC injection. Pharmacists suggested NOACs such as Rivaroxaban (Xarelto) as a suitable replacement for this patient as ACCP recognizes NOACs as an alternative for LMWH. However, there was a limited study on the use of NOACs in CAT patients [8, 16].

The latest ASCO Clinical Practice guidelines recommended Rivaroxaban or LMWH as initial and long-term anticoagulation for CAT patients [10]. The selection of Rivoroxaban was aided by The Select-D study, which observed reduction of recurrent VTE in CAT patients receiving Rivaroxaban compare with dalteparin, an LMWH [8, 9]. The Select-D trial had resulted in fewer episodes of recurrent VTE post completion of the Rivaroxaban regiment [9]. However, there was also an increase in bleeding events compared with LMWH, which limits the initiation of Rivaroxaban in CAT patient [2]. Apart from this study, there are no other reports of Rivaroxaban use in CAT patients. To compensate for increases in bleeding event, baseline Coag such as INR, PT, and aPTT was routinely assessed. The patient was counselled to monitor for bleeding tendencies as well. Based on the Doppler ultrasound post-treatment, we can conclude that this patient’s VTE event was successfully treated with Rivaroxaban. Our report provides preliminary evidence that Rivaroxaban administration of an initial dose of 15mg twice a day for 21 days and a maintenance dose of 20mg once a day for another three months is adequate to treat DVT in the cancer patient. The use of NOACs was particularly beneficial in our case as we could accommodate the patients’ SC injection hesitancy and continue planned chemotherapy regimen without any rescheduling. Our case reports add the experience of successfully using Rivaroxaban in clinical practice. However, the rivaroxaban regimen’s cost is higher than standard LMWHs treatment, questioning our approach’s sustainability for future cases.

Approval for this study was obtained from the National Medical Research Register, Malaysia (NMRR-21-1006-60130).

Written consent was obtained from the patients to publish his case.

The patients were notified on the intent to publish radiograph images and corresponding written consent was obtained.

Data sharing is not applicable to this article as no datasets were generated or analysed during the current study.

The authors would like to thank the Director-General of Health Malaysia for permission to publish this paper.

© 2021 Gobi Hariyanayagam Gunasekaran. This is an open-access article distributed under the terms of the Creative Commons Attribution License, which permits unrestricted use, distribution, and reproduction in any medium, provided the original author and source are credited. Hosting by Science Repository. All rights reserved.
DOI: 10.31487/j.CRSS.2021.02.01