Purpose: It is routine to administer oxytocin following delivery of the neonate during cesarean section. However, there are many kinds of administration methods. Heesen et al. published an international consensus statement in 2019 on the use of uterotonic agents, including oxytocin during cesarean section [1]. Our institution adapted the guideline-based oxytocin infusion method. We verified the validity of the new approach after one year.
Methods: A single-center retrospective study of consecutive patients who underwent cesarean section with a new protocol or the conventional manner from November 2019 to December 2020 was conducted. The primary endpoint was a significant difference in the amount of intraoperative hemorrhage and the total oxytocin amount. Secondary endpoints included differences in the incidence of intraoperative complications.
Results: The study included 174 patients: 66 in the new protocol group and 108 in the conventional group. There was a statistically significant difference between the two groups for oxytocin amount (new protocol 4.2 [3.2-5.9] vs. conventional 5.0 [5.0-10] IU, p<0.01) with equivalent intraoperative hemorrhages (new protocol 558 [337-963] vs. conventional 683 [484-1012] g, p=0.08). There was no significant difference in the incidence of nausea.
Conclusion: The new guideline-based oxytocin administration safely decreased the intraoperative oxytocin amount in our institution.

It is our routine to administer oxytocin following delivery of the neonate during cesarean section. However, there are many kinds of administration methods; intramuscular injection, bolus, continuous intravenous administration, and intramyometrial injection; that is, the standard protocol in an institution is entirely different from that in another institution. The World Health Organization published a new recommendation on uterotonics for postpartum hemorrhage prevention after vaginal delivery [2]. After that, Heesen et al. published an international consensus statement on the use of uterotonic agents, including oxytocin during cesarean section in 2019 [1]. Our institution adapted the guideline-based oxytocin infusion protocol after some discussion between the anaesthesiology and obstetrics departments. One year after the change in the oxytocin administration protocol, we verified the validity of the new method.

The institutional review board in Asahi General Hospital approved this single-center retrospective study (Jan. 19th, 2021; #2021011911), and this study was registered in UMIN Clinical Trial Registry (Link) (UMIN000042952) prior to data collection. We collected information on consecutive patients receiving cesarean delivery from November 2019 to December 2020 from the electric medical and anaesthesia records. Exclusion criteria included the allergy to oxytocin, placenta previa, placental abruption, and undergoing simultaneous other surgeries except for partial salpingectomy. The patients were divided into two groups: group N for the patients with the new protocol and group C for the patients with our conventional oxytocin administration methods (Table 1). The primary endpoint was a significant difference in the amount of intraoperative hemorrhage and the total oxytocin amount. Secondary endpoints included differences in the incidence of intraoperative oxytocin-related complications. Statistical analyses were performed with R version 4.0.2 using the Mann-Whitney test and Fisher’s exact test. All data were processed as non-Gaussian distributions, and the normality test was not performed.

The data are shown in medians [interquartiles] or numbers (percentage). There was no significant difference between groups in patient backgrounds.

The data are shown in medians [interquartiles] and numbers (percentage). Statistically different P values were marked with asterisks. 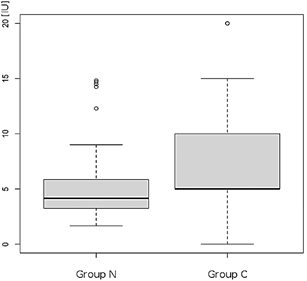 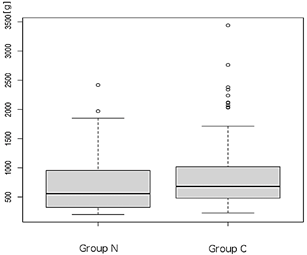 Oxytocin has been widely used after delivery from the 1950s-1960s to prevent postpartum hemorrhage [3]. The newest WHO recommendation for uterotonic agents, including oxytocin, was published in 2018-2019 [2]. Several years after the clinical application to vaginal delivery, oxytocin was applied to cesarean sections. However, there had been no guideline or international standard protocol for oxytocin administration after delivery during cesarean section until Heesen et al. published a global consensus statement in 2019 [1]. The guideline-based oxytocin administration in our institution showed a lesser amount of oxytocin with equivalent amount of intraoperative hemorrhage. The guideline suggests that the oxytocin receptor desensitization against oxytocin can happen when the uterine has already been exposed to oxytocin. Therefore, a greater amount of oxytocin should be administered in intrapartum C/S (Table 1).

The amniotic fluid volume sometimes affects the intraoperative hemorrhage volume count. However, the hemorrhage is counted after suctioning most of the amniotic fluid when the cesarean section is performed before amniorrhexis in our daily practice. Therefore, the oligoamnios or hydramnios did not affect the hemorrhage volume in our hospital. The amount of hemorrhage can be affected by hemodilution after a large amount of mineral or colloid solutions. There was a difference in the mineral solution amount administered intraoperatively. However, group C had less amount of mineral solution with more amount of hemorrhage. Both the duration of anaesthesia and surgery were shorter in group N. The shorter surgery could have decreased intraoperative hemorrhage. The change in the obstetric team members in April 2020 could have affected the duration of the surgery. The intraoperative urine amount was different between groups. The records are retrospective, and the patient could not have necessarily entered the operating room after voiding. Therefore, the recorded urine amount should have been the total of the residual urine and actual intraoperative urine excretion. However, oxytocin has a structural analogy with antidiuretic hormone, and excessive oxytocin administration could cause water retention in a dose-dependent manner [1, 4]. Less intraoperative oxytocin in group N might have been favourable for avoiding oxytocin-dependent water retention.

Although there was no significant difference in the incidence of nausea in this study, oxytocin causes dose-dependent nausea and vomiting [5]. However, this secondary outcome was statistically underpowered. Further, ideally, a prospective randomized study is warranted. Oxytocin causes rapid vasodilatation leading to hypotension after administration [6]. Therefore, a larger amount of oxytocin can cause more frequent nausea and vomiting.

The new guideline-based oxytocin administration for cesarean section significantly decreased intraoperative oxytocin amount with an equivalent amount of intraoperative hemorrhage in our institution.

© 2021 Takeshi Murouchi. This is an open-access article distributed under the terms of the Creative Commons Attribution License, which permits unrestricted use, distribution, and reproduction in any medium, provided the original author and source are credited. Hosting by Science Repository.
DOI: 10.31487/j.ACR.2021.02.01

The data are shown in medians [interquartiles] or numbers (percentage). There was no significant difference between groups in patient backgrounds.

The data are shown in medians [interquartiles] and numbers (percentage). Statistically different P values were marked with asterisks.