Follicular Lymphoma (FL) is a common lymphoma with variable clinical aggressiveness, depending on histological grade. It accounts for approximately 20 to 30% of all non-Hodgkin lymphomas [1, 2]. The prognosis of FL is very heterogeneous, and the therapeutic options are increasingly risk-adapted. Histologically, FL has been graded into grade 1-2 and grade 3 by visual counting and estimation of the absolute number of Centro blasts in neoplastic follicles [3]. However, this grading method is subjective and inconsistent. Flow cytometry appears more objective and consistent in evaluation of lymphoma cell size variation of FL. A significant variation in metabolic activity has also been observed in FL studied by [18F] fluoro-2-deoxy-D-glucose (18F-FDG) positron emission tomography (PET) [4, 5]. The purpose of this study was to correlate the average lymphoma cell size measured by flow cytometry and metabolic activity based on 18F-FDG PET–CT scan in FL, compared to the pathological grading, in a cohort of FL subjects.

Over a period of four years, 64 consecutive patients with FL proven pathologically were enrolled in this study. Patients were ineligible if they had other concomitant malignancy, or if they had received prior radiation therapy or chemotherapy. This study has been reviewed and approved by the Human Investigation Committee for enrollment. These patients included 25 males and 39 females with median age of 61 years. FLs are classified using the World Health Organization (WHO) criteria and graded from grades 1–3 based on the number of centroblasts per high power field (hpf), as grade 1 (0–5 centroblasts per hpf), grade 2 (6–15 centroblasts per hpf), and grade 3 (>15 centroblasts per hpf). 44 cases were grade 1-2 (FL1-2, defined as indolent) and 20 were grade 3 (FL3, defined as aggressive) based on current WHO classification [3].

The routine lymphoma immunophenotyping procedure was performed as below. Fresh tissue was teased apart with scalpel and forceps, and then washed with a 0.1% bovine serum albumin and phosphate-buffered saline mixture. Following two more washes, the suspension was filtered through a 74-μm nylon mesh. Cells were incubated with a panel of antibodies in the dark at room temperature for 30 min and then washed twice. Samples were run on a Beckman Coulter FC500 and analyzed using CXP software. For this study, list mode data of Kappa-FITC /Lambda-PE/CD20-ECD/CD10-PC5/CD5-PC were retrospectively reanalyzed. All these antibodies were obtained from Beckman Coulter (Miami, FL). The lymphoma cells were gated based on the expression of light chain (kappa and lambda) and B-cell markers (CD20 and CD10). T-cells were identified by T-cell markers (CD5). The average size of lymphoma cells was determined by measuring mean channels of forward scatter (FSC) which was standardized as relative FSC channels by subtracting the mean FSC of the internal reactive T-cells from the mean FSC of lymphoma cells. A positive value indicated larger tumor cells in comparison with T-cells while a negative value implied smaller tumor cell.

Patients received an average of 555 MBq of 18F-FDG with the PET–CT scan started at 1.5-hour post-injection under standard 4-6 hour fasting condition with blood glucose recorded. The pre-scan fasting blood glucose was 93.14 ± 23.31 mg/dl. The PET data were acquired with a 3-min scan time per bed position with a total PET acquisition time of 18-24 minutes. A complete patient study typically involved six to eight overlapping bed positions to cover the entire body which included the neck, thorax, abdomen, and pelvis. The images were reconstructed using non-time-of-flight iterative reconstruction algorithms. An ordered subsets expectation maximization (OSEM) algorithm with 30 chronologically ordered subsets and 2 iterations were used. Attenuation was corrected using the CT transmission data. A 7.0-mm post-reconstruction smoothing filter was used. The image matrix size was 256 × 256 mm. An initial scout scan was obtained first to define the imaging field for the CT component of image acquisition, which used the following imaging parameters: 140 kVp, 120–200 mA, 0.8 s per CT rotation, pitch 1.75:1, and detector configuration of 16 × 1.25 mm, 3-mm slice thickness with oral contrast only. Sixty-four pre-treatment PET–CT scans within 2 months of biopsy were analyzed and the maximum SUV, defined as tumor activity divided by dose injected per body mass, was measured by searching the maximum value within a volume of interest over the biopsy region. All the SUVs were corrected by glucose level to the standard level of 100 mg/dl using the formula published previously [6, 7]: SUV100 = SUV x (100/[Glc])g where g = -0.5

The difference of average lymphoma cell sizes between FL1-2 (indolent) and FL3 (aggressive) was compared with Student t test. Then the difference of SUV100 between FL with small and large sizes were also compared with Student t test. Finally, the correlation between lymphoma cell size (relative FSC) and metabolic activity (SUV100) was cross-tabbed using the cell size and SUV100 cut off values determined by discriminant analysis and tested by Chi-Square test. A two-tail p-value less than 0.05 was considered significant in all tests.

Table 1 and 2 revealed age, gender, blood glucose at the time of injection, tumor cell size, original SUV, and SUV100 for patients with grade 3 FL and grade 1-2 FL respectively. Average lymphoma cell size of FL3 (relative FSC of 92, range of -32 to 243) was significantly (p < 0.0005) greater than that of FL1-2 (relative FSC of -15, range of -83 to 153). Discriminant analysis suggested that the best cell size cut-off value was -18 for classifying the histologically determined grade 3 and grade 1-2 FL (Figure 1). There was significant difference between SUV100 when using this cut-off by flow cytometry to grade FL into two dichotomous group (p = 0.018) and the best SUV100 cut-off value was determined to be 11.5 by discriminant analysis (Figure 2). Cross-tabbing the entire group using the cell size (FSC) and SUV100 cut off values obtained from discriminant analysis, there was significant correlation between lymphoma cell size (relative FSC) and metabolic activity (SUV100) (p = 0.021 by Chi-Square test), suggesting the possibility of combining these two-objective measurements to risk stratify FL (Figure 3).

Using the special reference lines of Y=11.5 for SUV100 and X=(-18) for relative FSC, there was only one patient with aggressive risk of lymphoma fell wrongly into this quadrant among a total of 20 patients. Nineteen out of 20 patients (95%) were classified in agreement with pathology.

PET using 18F-FDG has been recognized as an important clinical tool, particularly in oncology and is now routinely used in the detection, staging and treatment response evaluation of various tumors [11–15]. PET scan has also emerged as a major imaging modality for the staging and follow-up of patients with non-Hodgkin’s lymphoma (NHL) [16, 17]. Studies have also shown that follicular lymphoma reveals a varying degree of FDG avidity [4, 5]. This metabolic spectrum of follicular lymphoma may offer an opportunity to extract clinically useful information. The standardized uptake value (SUV) is a semi-quantitative measure of the glucose metabolism based on the degree of FDG uptake, which is derived from the tumor activity divided by dose per body mass in the attenuation-corrected PET images [18-20]. It may improve the definition of abnormal areas by reducing subjective visual assessment. It is currently common practice to use 18F-FDG PET scan as an imaging tool in the evaluation of lymphoma, supplemented by semi-quantitative information extracted in the form of SUV, to aid in therapeutic decision-making and prognostication [18]. To assure the uniformity due to glucose variations, all the SUVs in this study were corrected to a uniform glucose level of 100 mg/dl (SUV100) before entering into statistical analysis [6, 7].

Increased cell size was shown in the current study to be associated with more aggressive grade in FL (Figure 1). It had been shown previously that increased tumor metabolism by SUV100 was also associated with aggressive grade of lymphoma [6, 7]. However, cell size and metabolic activity may not be always predictive of each other. Thus, the current study cross tabbed these two independent parameters for correlation (Figure 2). A more accurate risk stratification may be possible using a combination of cell size and metabolic activity (Figure 3). If both relative FSC and SUV100 are low, the patient has a high chance of being in the low or indolent risk of lymphoma and observation may be justified. However, ongoing clinical validation is needed to evaluate the combined independent prognostic values of cell size measurement and metabolic activity for FL.

Legends as in Table 1 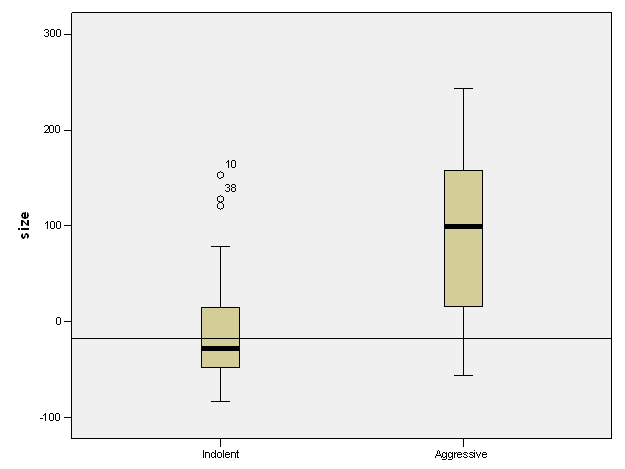 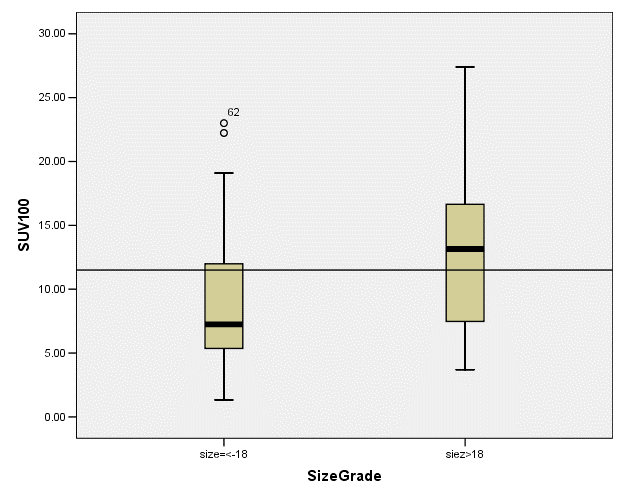 Figure 2: The standardized uptake value corrected by glucose level to the standard level of 100 mg/dl (SUV100) versus follicular lymphoma (FL) with tumor cell size (relative FSC) smaller or greater than -18. Significant difference was demonstrated between SUV100 when using the cut-off value of -18 relative FSC by flow cytometry to grade FL into two dichotomous group (p = 0.018) and the best SUV100 cut-off value was determined to be 11.5 by discriminant analysis. 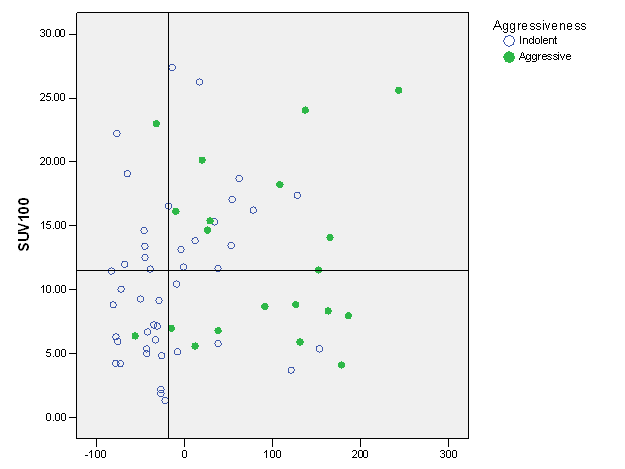 Clinically FL grade 3 is typically more aggressive than FL grade 1-2. The correlation of average lymphoma cell size and metabolic activity identified in this study in discriminating FL3 and FL1-2 validates the potential utility of flow cytometry and PET scan in grading FL. Using combined cell size and metabolism in refining biologic risk categories may be more reproducible, objective, and easy to use than manual counting of Centro blasts, with great potential for serving as an independent criterion in determining lymphoma aggressiveness in future.

© 2019 James Huang. This is an open-access article distributed under the terms of the Creative Commons Attribution License, which permits unrestricted use, distribution, and reproduction in any medium, provided the original author and source are credited. Hosting by Science Repository. All rights reserved.
DOI: 10.31487/j.RCO.2018.01.006

lymphoma cell size: relative FSC=<-18, relative FSC>-18
Figure 2: The standardized uptake value corrected by glucose level to the standard level of 100 mg/dl (SUV100) versus follicular lymphoma (FL) with tumor cell size (relative FSC) smaller or greater than -18. Significant difference was demonstrated between SUV100 when using the cut-off value of -18 relative FSC by flow cytometry to grade FL into two dichotomous group (p = 0.018) and the best SUV100 cut-off value was determined to be 11.5 by discriminant analysis.

Lymphoma cell size: relative FSC
Figure 3: The classification of lymphoma indolent or aggressive behavior using cutoff values of 11.5 by SUV100 for metabolism and -18 by relative FSC for tumor cell size.

Legends as in Table 1