Synovial Sarcoma of Vena Cava Inferior in a Child: an Unusual Presentation

We present a case of 3-year-old boy with monophasic synovial sarcoma which invaded the right atrium, encircled vena cava inferior and dislocated femoral arteries. A tumor excision surgery was performed under deep hypothermic circulatory arrest. The recommended treatment for this type of tumors is radical excision, but since it was impossible to remove the whole tumor radiotherapy and chemotherapy was initiated. The patient is followed-up every 6 months and is, 6 years after the surgery, in long-term remission with no signs of disease progression.

Herewith we present a rare case of soft tissue sarcoma in a 3-year-old boy who was admitted to our hospital with a large tumor encircling vena cava inferior, invading right atrium and dislocating femoral arteries. The patient was operated on and hystopathological examination proved the tumor to be monophasic synovial sarcoma. The main treatment for this kind of tumors is radical surgery however due to the extreme tumor only partial resection was feasible.

A 3-year-old boy was admitted to our hospital in November 2011 because of abdominal pain, nausea and cough which lead to vomiting. Upon arrival the patient did not fever, was drowsy and pale. At physical examination no signs of rash were noted. The abdomen was swollen, painful while touching though the peristalsis was normal. The next day abdominal ultrasonography was performed, and abdominal mass was suspected therefore abdominal, pelvic and chest computed tomography was performed on the same day, which confirmed the abdominal tumor (Figures 1-3). The tumor had clear boundaries, invading right atrium, encircled vena cava inferior and dislocated femoral arteries. The size of the tumor was approximately 212 x 42 x 35 mm with no invasion to other tissues. The cardiac ultrasound showed homogenous masses filling the right atrium and dislocating the tricuspid valve. Some fluid was wound in pericardium.

In two days after initial presentation the patient was transferred to the cardiac surgery. An urgent median sternotomy was performed the very next day, upon the surgery the right atrium was found to be enlarged and hardened. The tumor invaded the right atrium, obturated the tricuspid valve and spread along compressing left atrium. There were no signs of the lesion invading the left heart chambers. The tumor invaded the vena cava inferior, which increased in size, however, was completely obturated by the tumor. For the complete resection of the tumor deep hypothermic circulatory arrest under cardiopulmonary bypass (CPB) was performed. Then the surgery proceeded with the excision of the tumor from the right ventricle. After the excision the medial laparotomy was performed. Vena cava inferior was hardened and enlarged, about 6-7 cm in diameter, partially invaded by the tumor, which also encircled abdominal aorta. The abdominal aorta and the right femoral artery were completely obturated. After having separated part of the liver, the rest of the tumor was excised from the vena cava inferior up to femoral veins by dissecting vena cava inferior. Visually the tumor was yellow, jelly-like and intraoperative pathology examination suggested rhabdomyosarcoma. The tumor was then dissected from the walls of the vein and the vein was sutured up to the right atrium. A drain was placed in the abdominal cavity, the diaphragm was sutured.

The later histopathology examination revealed areas of haemorrhage and necrosis, with a pale, yellow appearence. Also the tumor was confirmed to have synovial sarcoma translocation T(X;18)(p11:q11, SS18-SSX2). The definitive histopathology report defined the tumour as monophasic synovial sarcoma. A control cardiac ultrasound after two weeks showed normal left chambers and slightly enlarged right chambers. Later CT was performed, which revealed no masses in right heart chambers, but showed vena cava inferior filling defect 37,5 cm below right atrium (52 x 9, 9 mm). Below the defect vena there was no contrast and it was filled with non-homogenous masses. Below the aortic bifurcation a 16 x 10 x 26 mm irregular shaped mass was noted with contrast enhancement around the edges. The bone marrow puncture was performed which showed no metastasis.

The patient was treated by chemotherapy and radiotherapy. The patient was treated according to the CWS diagnostic and treatment protocol, was assigned to the standart risk group B. The patient received chemotherpay for 25 weeks. A combination of three drugs–vincristine, actinomycin D and cyclophosphamide was used initially followed by radiotherapy (radiation field was from the right atrium to vena cava inferior bifurcation), with single dose of 1,6 Gy and total dose of 22,4 Gy) After the complete of radiotherapy the patient continued chemotherapy for 22 weeks with etoposide, trofosfamide, idarubicin by O/TIE scheme for maintenance stage. The treatment was completed in August 2012. Control CT or MRI scans was performed every 3 montys for 3 years and now every 6 months and show stable remission. The last scan was performed on 2018-10-24 and shows no evidence of disease progression. The patient is in long-term remission.

Out of all malignant soft tissue tumors synovial sarcoma comprises up 6 to 10% of all cases and is 4th most common malignant soft tissue tumor [1]. Synovial sarcoma is extremely agressive tumor, with survival of 5 to 10 years is only 36% and 20% respectively [1]. This disease usually affects teenagers and young adults with the highest morbidity rates at 15-35 years. It was also noted that males are affected slightly more often than females [1, 2-4]. Soft tissue sarcomas in children under 10 years usually manifests in head and neck, thoracis and limbs regions [5]. Even though most commonly synovial sarcomas develop around large joints, especially around knee joint and are associated with joint capsule, ligaments, bursas and fascias, in some cases tumors are found in head and neck region, pharynx, throat and orbitas. Retriperitoneal space, mediastinum, bones, nerves, vessels as well as visceral organs such as lungs, pleura, heart, prostate or kidneys can also be affected by this type of tumor [2].

In our case the localization of synovial sarcoma and the patient age at presentation were exceptional. After having searched the available data published in 2008-2018, we could identify only 17 cases of primary synovial sarcoma in vessels and heart. Only two of them included patients under the age of 19. Depending on the localization and the size of the tumor, the obstruction site and scale, clinical manifestation may vary and can cause a flu-like symptoms such as shortness of breath, cough, nausea, weakness, chest pain, palpitation, syncope or even cardiac arrest. In case of blood flow obstruction in vena cava inferior then liver might be affected, and circulatory congestion of liver, hepatomegaly and ascites might appear, and the patient would complain of abdominal pain, flatulence, early satiety and swelling of lower limbs [1, 3, 6-10].

The published case descriptions report a varying size of the right heart synovial sarcoma from 32 to 105 mm in diameter [1, 3, 6, 8]. In our case the tumor was surprisingly big therefore it was difficult to determine whether the primary tumor originated from the heart or the vessel. Given the slow progression of that synovial sarcoma and clearly visible venous collaterals the imaging scans we concluded that the tumor originated from the vessel wall.

The diagnosis may be challenging since the tumor usually varies in size, may invade pleura, pericardium, heart, great vessels, vertebrae, etc. Tumor itself usually is soft, white mass with necrosis and hemorrhage regions and may have cystic degeneration. Therefore CT, MRI, transthoracic echocardiogram and transesophageal echocardiogram are recommended to make a definitive diagnosis.

The tumor is usually treated according to the soft tissue tumor treatment guidelines. However, the unusual localization, size and age at presentation make the tumor management challenging. The main treatment option is radical excision of the tumor following chemotherapy or/and radiotherapy. In our case the patient received both radiotherapy and chemotherapy after the successful surgery resulted only in partial tumor resection. Despite not-radical surgery at the time of reporting the patient remained in long term remission. 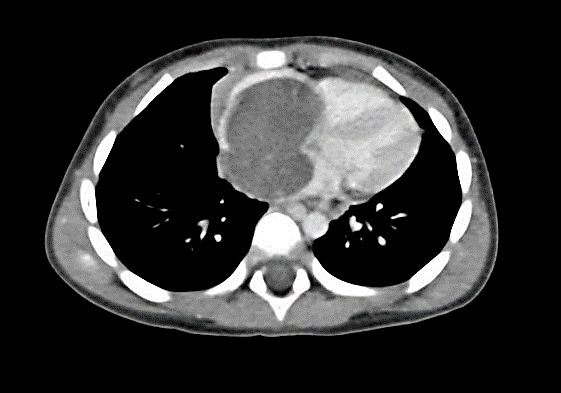 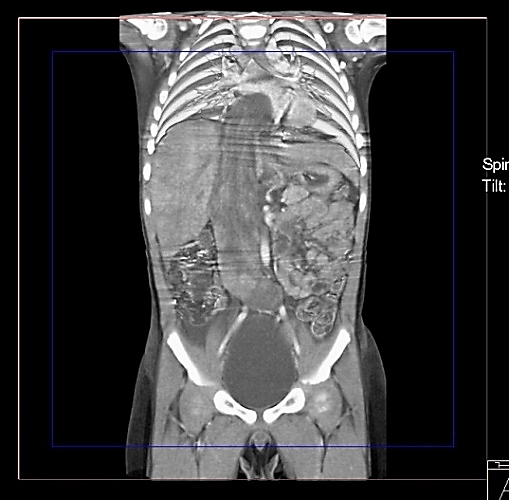 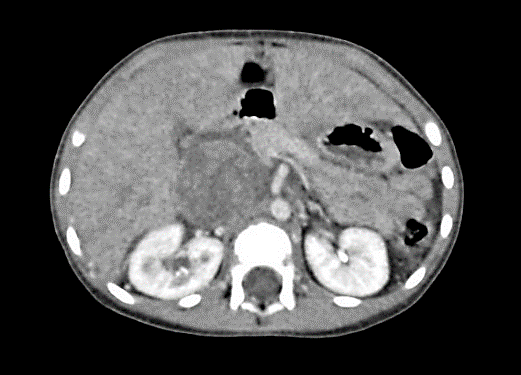 © 2019 Jelena Rascon. This is an open-access article distributed under the terms of the Creative Commons Attribution License, which permits unrestricted use, distribution, and reproduction in any medium, provided the original author and source are credited. Hosting by Science Repository. All rights reserved.
DOI: 10.31487/j.AJSCR.2020.02.04