We present the case of a 55-year old postmenopausal female with bilateral early stage clinically node negative breast cancer who was treated with bilateral lumpectomy with axillary lymph node dissection revealing N1a nodal disease in her right breast with extra-nodal extension and micrometastatic disease in her left breast. Given the controversy in management for low nodal burden for macroscopic and microscopic nodal disease, we review the key trials in regional nodal management that have included patients with low nodal burden to explain our reasoning for treatment decisions. Our patient was treated with both hypofractionation and conventional treatment. She is an excellent teaching case to demonstrate how much of an impact the decision regarding fractionation can have on long term breast cosmesis and toxicity.

Despite rapidly increasing choices regarding dose, fractionation, and axillary management there are no guides to assist decision making for bilateral breast treatment. We present the case of a postmenopausal female with bilateral clinically node negative breast cancer who was treated with bilateral lumpectomy with axillary lymph node micrometastatic disease in her left breast and macrometastatic disease on the right breast. She was treated with whole breast irradiation with hypofractionation (HF) to the left breast and conventional fractionation (CF) with regional nodal irradiation on the breast and axilla with macrometastatic disease. This patient demonstrates the differential toxicity of different radiation fields and fractionations and serves as an important example of how the decisions regarding adjuvant radiation of each breast cancer must be made interdependently in synchronous bilateral breast cancer.

Regarding adjuvant radiation, the recommendation was made for whole breast irradiation (WBI) and regional nodal irradiation (RNI) on the right and WBI alone on the left. The recommendation for RNI on the right was because of her macrometastatic disease in 2 LN, particularly in the context of her younger age and presence of ENE, especially in light of trials such as the MA-20 and EORTC 22922 trials which showed a small but statistically significant benefit with RNI on 10 year disease free survival [9, 10]. In the context of micrometastatic disease and a complete ALND on the left side, the decision was made to proceed with WBI alone given her low risk of regional recurrence on that side as demonstrated by prior studies with rates of <1% [11-14]. Given the inclusion of the nodes, conventional fractionation (CF) was used on the right (5000 cGy in 25 fractions). Of note, there are ongoing trials exploring hypofractionated RNI, but the patient was off trial and thus recommended for conventional fractionation [15, 16]. Given that only WBI was recommended on the left, she was treated with a hypofractionated (HF) regimen (4005 cGy in 15 fractions). A sequential 1000 cGy boost was delivered to both the right and left lumpectomy cavities. Figure 1 depicts images taken prior to RT which reveals excellent baseline cosmesis and symmetry on the day of her simulation. The patient had small breast separation (<25 cm) which allowed for excellent dose homogeneity in her treatment plans PTV with dose ranges of 95-107% for the left hypofractionated breast and dose ranges of 93-106% for the right conventionally fractionated breast. 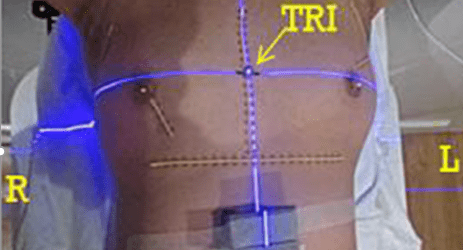 Figure 1: Images from her simulation from the day of her CT simulation.

Figure 2: Images from her follow-up appointment 1 year after completion of RT in the supine at 45⁰ (left) and upright (right). There is marked retraction and atrophy in the right breast which received conventional fractionation.

With regard to acute toxicity, the patient developed grade 1 dermatitis in the left breast, grade 2 dermatitis in the right breast requiring xeroform dressing to the inframammary fold, and grade 1 fatigue. In terms of late toxicity, the patient was seen for follow-up 1 year after completion of RT and was noticed to have asymmetry in her breast appearance with increased fibrosis and retraction of the conventionally fractionated right breast as compared to the hypofractionated left breast. Figure 2 shows images of her during her follow-up appointment while partially supine at a 45o angle (left) and sitting upright (right).

Both her acute and late toxicity was significantly decreased on the left side which received hypofractionated treatment. In multiple seminal randomized clinical trials comparing hypofractionation and conventional fractionation, the two fractionation regimens have proven to be equivalent with regard to cancer outcomes [17, 18]. These trials have reported that hypofractionation has decreased or equivalent rates of breast shrinkage, telangiectasia, and breast edema as compared to conventional fractionation. A more recent trial from MDACC randomized 287 patients with DCIS or early stage breast cancer to CF WBI or HF WBI with a tumor bed boost. This trial demonstrated a 34% decrease in grade 2 or higher acute toxicities with HF compared to CF, including fatigue, pruritis, breast pain, dermatitis, and hyperpigmentation [19]. At 3 years, adverse patient-reported cosmesis decreased from 13.6% (n=15) with CF to 8.2% (n=8) with HF (p=0.002), thus confirming non-inferiority with HF [20]. Patients with large breast size had 18.6% decreased adverse cosmetic outcome with HF-WBI.

Our patient is unique in that she served as her own control and demonstrated improved acute and late toxicity with hypofractionation. Although her tumors were located in different quadrants, she had similar volumes of tissue removed from each breast and axilla, small breast separation, and excellent dose homogeneity in her plan which eliminates other potential explanations for the difference in her cosmesis. Her case perhaps argues for the same fractionation to be used in bilateral breast cases for long-term symmetry. Though each cancer is indeed independent and may require different treatment courses, these diseases are of course occurring at the same time in the same person and thus individual treatment plans should perhaps be modified to be more similar with regard to fractionation. Whether that fractionation needs to be conventional fractionation or hypofractionation, even when targeting the regional nodes, is an area of active study.

No conflicts to disclose.

This research did not receive any specific grant from funding agencies in the public, commercial, or not-for-profit sectors.

© 2021 Naamit K. Gerber. This is an open-access article distributed under the terms of the Creative Commons Attribution License, which permits unrestricted use, distribution, and reproduction in any medium, provided the original author and source are credited. Hosting by Science Repository. All rights reserved.
DOI: 10.31487/j.GCCR.2019.01.04

Figure 1: Images from her simulation from the day of her CT simulation.

Figure 2: Images from her follow-up appointment 1 year after completion of RT in the supine at 45⁰ (left) and upright (right). There is marked retraction and atrophy in the right breast which received conventional fractionation.