A two weeks old female neonate presented to our centre with congenital pin-pong fracture observed after delivery via caesarean section. Spontaneous elevation of the depression was achieved with watchful waiting. Literature relevant to this case was reviewed.

Pin-pong fracture is the presence of depressed skull deformity resembling indentation of the pin-pong ball with no evidence of fracture line on imaging [1- 4]. It’s classically seen in neonates and infants when the skull bones are soft and flexible and so able to indent without break in continuity [2, 5]. They are forms of green stick fracture [2]. The incidence of congenital pin-pong fracture is 1 to 2.5 per 10,000 live births [2, 6, 7]. Congenital pin-pong fracture is an extremely rare condition with limited reports in the absence of trauma in literature [1, 8-11]. To the best of our knowledge this is the first report in Nigeria. Usually, pin-pong fracture occurs following head trauma during complicated deliveries such as instrumental or with obstetric manoeuvres or from abdominal trauma in pregnancy in extremely uncommon cases, it occurs with no identifiable trauma or any other aetiology [2, 6, 12].

The proposed mechanism of congenital pin-pong fracture is persistent intrauterine pressure on the soft, malleable skull caused by bony structures such as sacral promontory, pelvic symphysis, 5th lumbar vertebra or ischial bone or even by fetal extremities [2, 3, 6]. Also, fetal head pressure against maternal pelvic mass like fibroid or tumour may results in pin-pong fracture [3]. Cranial computerised tomography scan is the preferred imaging modality in evaluation of bone abnormality like pin-pong fracture [13]. The treatment of pin-pong fracture remains controversial [3, 6]. Both non-operative and operative modalities were described depending on the neurological status of the patient and radiological characteristics of the depression. [1, 6, 13, 14] The objective of this paper was to report a successful treatment of congenital pin-pong fracture in a New-born using a watchful waiting strategy. 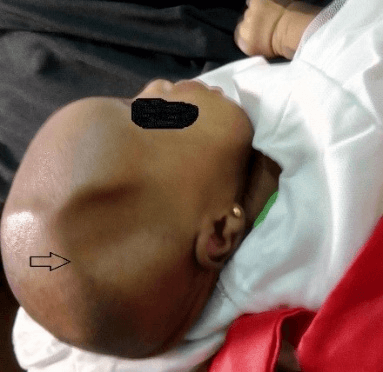 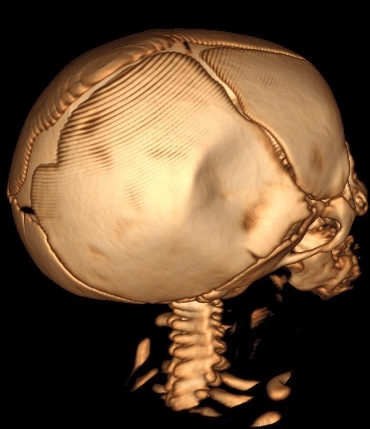 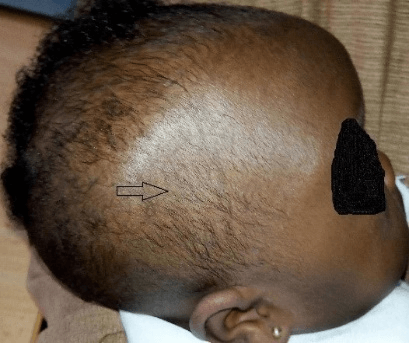 Congenital pin-pong fracture is an uncommon neurosurgical condition seen mostly in African women as in the index case [13, 15]. It commonly involves the parietal area on the right side similar to the present report [4, 11]. In contrast to some Authors, congenital pin-pong fracture usually affects the frontal area in the Africans and parietal region in Western countries [15]. Several aetiological factors related to both the mother and the baby, but none was identified in our patient. Congenital pin-pong fracture usually presents a cosmetic concern as in the case of our patient who had no symptoms other than aesthetic deformity [3]. However, some patients may have abnormality such as scalp haematoma, intracranial haematoma, brain edema or sinus tears [1]. Several Authors reported different treatment options for pin-pong fracture. The choice of treatment should be guided by the severity of the fracture and the presence of underlying intracranial injury [3, 14]. Those in favour of surgical treatment express concerns that the pressure caused by depression on the brain may lead to brain damage, decrease cerebral blood flow and epileptogenic foci therefore, the need for surgical elevation to minimise these effects [6].

However, many studies have demonstrated that in the absence of neurological deficit or intracranial injury, there is no difference between operative and non-operative treatment measures, in terms of development of future neurological deficit or epilepsy [3, 6]. Because of theses aforementioned facts, we opted for none-operative watchful waiting in our patient who had successful spontaneous elevation at four months of birth. In tandem with our case, studies in literature have demonstrated spontaneous elevation within 4 to 6 months of life [11]. Although, other none-operative modalities like obstetrics vacuum extraction, use of breast pump and Raynor-parsa manoeuvre by applying digital pressure on the margins of the depression have described in literature, we chose none-operative watchful waiting because it’s the least invasive. In neonates, the presence of membranous sutures, patent fontanelles and the low calcium in the skull confer it a plasticity. Because of the plasticity, relative thin skull, frequent crying in new-borns with resultant increase in intracranial pressure had been thought to result in spontaneous elevation of depressed skull [3]. Pin-pong fracture deeper than 5mm were considered significant requiring surgical elevation [1]. In line with this view, the depression was 3.8mm in our patient and as such none-operative watchful waiting was instituted.

Congenital pin-pong fracture is a rare neonatal skull abnormality that can be seen with no identifiable aetiology. Watchful waiting without the need for more invasive surgical elevation may suffice in the absence of neurological deficts attributable to the depression and intracranial injury.

© 2019 Aliyu Muhammad Koko. This is an open-access article distributed under the terms of the Creative Commons Attribution License, which permits unrestricted use, distribution, and reproduction in any medium, provided the original author and source are credited. Hosting by Science Repository. All rights reserved.
DOI: 10.31487/j.AJSCR.2020.01.02