First metacarpal collapse is the main cause of recurrent pain after a total trapeziectomy. The most frequent surgical revision is through trapeziometacarpal arthrodesis. We present the case of a woman of 62 years old who presented pain and functional impairment of the thumb due to the collapse of the first metacarpal after two previous surgeries for basal thumb osteoarthritis (OA). The case was treated by implanting a cup in the distal scaphoid to create a scaphometacarpal prosthesis. After a follow-up of 8 months, the patient recovered complete mobility, VAS of 0 and an improvement in DASH and compared to the pre-surgical scores. Radiographic studies showed a correct implantation of the prosthesis. This is a new therapeutic option that can be used as a rescue procedure in case of a failure of trapeziectomy.

Basal thumb osteoarthritis (OA) is the second most frequent joint affected (only followed by distal interphalangeal joint OA) more prevalent in women it is known to cause pain leading in some cases to severe impairment [1, 2]. Although trapeziectomy with or without tendon interposition is the most used treatment, with consistently good results in the long follow up, there are some complications associated to it. The collapse of the first metacarpal is the most frequent complication, sometimes leading to the surgical revision. There are very few salvage surgeries for the procedure, the most used one is trapezium-metacarpal arthrodesis with some disadvantages as limitation of range of movement and non-union. We present a rescue technique using a trapezium-metacarpal prosthesis, inserting the cup in the scaphoid.

A 62-year-old lady came to our clinic with a basal thumb OA grade III (Eaton-Littler) diagnosis, a trapezium excision with ligament reconstruction and tendon interposition (LRTI) using Burton-Pellegrini technique was performed in March 2011. After a follow up of 3.5 years, the patient felt persistent pain, the radiographies showed a first metacarpal collapse that caused an impingement between the scaphoid and the base of the first metacarpal. A total prosthesis of the trapezium (Trapezex®) was performed with acceptable outcome. After 4 years, a radiograph showed dislocation of the implant, the patient was offered at that time a joint replacement using the Maïa prosthesis (Lèpine®, Lyon) (Figure 1). We proceeded under regional anaesthesia using the previous dorsoradial approach, after the excision of the implant, a Kirschner wire was used as a guide to calibrate the center of rotation of the scaphoid where the cup was then implanted after progressive reaming (the smallest cup was used).

We checked its correct position in relation with the first metacarpal under fluoroscopy control. The stem was placed in the first metacarpal following the conventional technique indicated by the manufacturer. The neck is modular, and we used the largest component (XL) to restore the length of the first metacarpal. A spica cast was applied post-operatively for two weeks, and the patient started self-assisted rehabilitation. After 8 months of follow-up the patient was satisfied with the result, free of pain (VAS of 0) with an opposition of 10 (using Kapandji test) (Figure 2). Her pinch and grip strength were increased (from 3-6 Kg pinch strength, and from 3, 3-19 Kg in grip strength), (Figure 3) as well as her score obtained in the DASH questionnaire (from 62, 9 to 10). The implants did not show any radiological signs of migration or loosening.

Figure 2: Clinical picture showing the ROM obtained. The optimus ROM was achieved after 2 months and was maintained till the end of the follow-up. 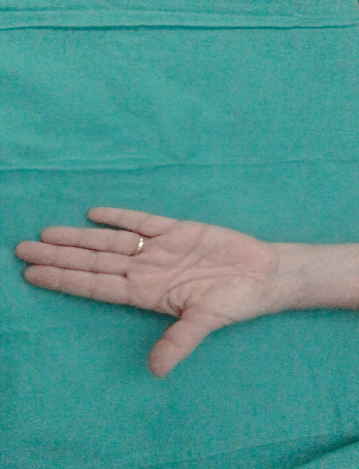 Trapeziectomy with LRTI is one of the commonest techniques used in symptomatic basal thumb OA and good results have been reported [3]. The most frequent failure is the first metacarpal collapse. Carpometacarpal fusion with or without bone graft is the main option to solve this collapse, although some complications have been reporter using this technique (non-union, material migration). We used a total prosthesis of trapezium bone (Trapezex®) to restore the appropriate length and avoid the contact between metacarpal and scaphoid in our case. After the dislocation of the implant we proposed the patient a rescue surgery using a trapeziometacarpal prosthesis as a ‘scaphoid-carpal’ prosthesis, in order to avoid the complications of a carpometacarpal artrhodesis.

The key point of this adjustment is the meticulous placement of the cup in the proximal part of the scaphoid. A Kirschner wire was placed in the long axis of the scaphoid to find the optimal point of placement and to prevent fractures during the reaming of the cup. We use the self-retentive cup model in order to prevent luxation of the prosthesis. Restoration of the appropriate length of the first metacarpal is important to improve the opposition movement and to increase the key pinch strength. We gained the length of the first metacarpal with the longest neck, but this may be not necessary with other prostheses. A short series using this technique has been published recently (June 2020), but we were not aware of any case published when we first used this procedure [4].

This technique is an acceptable option to rescue a previous trapeziectomy as an alternative to joint fusion. On the other hand, this technique allows the fusion in future surgeries if needed.

© 2019 Oscar Izquierdo. This is an open-access article distributed under the terms of the Creative Commons Attribution License, which permits unrestricted use, distribution, and reproduction in any medium, provided the original author and source are credited. Hosting by Science Repository. All rights reserved.
DOI: 10.31487/j.JSCR.2020.04.04

Figure 2: Clinical picture showing the ROM obtained. The optimus ROM was achieved after 2 months and was maintained till the end of the follow-up.