Endoscopic resection (ER) is the treatment of choice for early gastric cancer (T1) without lymph node involvement. An additional gastrectomy with D2 lymphadenectomy is recommended if ER is considered as non-curative. Here, we present a case of a robot-assisted sentinel lymph node procedure performed with the use of duel-tracer, including ICG fluorescence and technetium-99, after a non-curative ESD for an early gastric tumor. Five “hot” lymph nodes were resected, one of which was positive for metastasis. A subtotal gastrectomy with D2 lymphadenectomy was performed additionally during the same procedure. This case presentation indicates the feasibility of a robot-assisted sentinel lymph node procedure in early gastric cancer.

Early gastric cancer is defined as a T1N0 stage tumor, with tumor invasion limited to the mucosa or submucosa [1]. Gastric cancer is more often diagnosed in an early stage in Asian countries compared to the Western word, which is mainly due to the high incidence of gastric cancer and various screening programs. In the Western world, around 10-15% of gastric tumors are diagnosed as early gastric cancer [2]. In line with the Japanese gastric cancer guideline, the European Society of Gastrointestinal Endoscopy (ESGE) guideline recommends endoscopic resection (ER), including endoscopic mucosal resection (EMR) or endoscopic submucosal dissection (ESD), as treatment of choice for early gastric cancer without lymph node involvement [3]. An additional gastrectomy with D2 lymphadenectomy is recommended if ER is considered as non-curative at the pathological evaluation, in order to remove possible lymph node metastasis or local residual tumor [1-4].

However, studies have indicated lymph node metastasis to be present in only 5-10% of patients who underwent an additional gastrectomy after a non-curative ER [5-8]. If the absence of lymph node metastasis could be established by using a sentinel lymph node procedure, an unnecessary gastrectomy may be avoided. A recent meta-analysis concluded that sentinel node mapping with the use of indocyanine green (ICG) fluorescence imaging in gastric cancer is feasible with encouraging results in terms of detection rate, accuracy and sensitivity [9]. Most of the available literature studies are from Asia and make use of conventional laparoscopic techniques. We present the case of a Western patient who underwent ESD treatment for a high risk early gastric tumor. A robot-assisted sentinel node procedure with dual-tracer, including a technetium-99 and ICG, was additionally performed, in order to guide further treatment.

A 54-year old man visited our institution for a second opinion, to discuss further treatment after having undergone ESD of a T1N0 tumor located in fundus of the stomach. The pathological histology of the ESD specimen revealed a poorly differentiated adenocarcinoma, infiltrating the submucosa, with local lymphovascular infiltration and less than 1 mm margin to the cauterization plane. The tumor was staged as a T1b (sm2) tumor, with an estimated chance of lymph node metastasis of at least 25-30%. According to the Dutch gastric cancer guideline and in line with the Japanese gastric cancer guideline, a gastrectomy with D2 lymphadenectomy had been proposed in the referring hospital [1, 10]. However, the patient had a strong wish to preserve his stomach to avert reduced quality of life after total gastrectomy. In consultation with our multidisciplinary team meeting and the patient, we consented to a sentinel node procedure with frozen section. In case of a negative sentinel node, we would only perform sentinel basin dissection. In case of a positive sentinel node, subsequent gastrectomy with D2 lymphadenectomy would follow. Informed consent was obtained from the patient.

Preoperative endoscopic ultrasonography and CT scan of the thorax and abdomen showed no signs of local recurrence or lymphadenopathy. The day before the operation a dual-tracer, consisting of technetium 99m and ICG, was injected via gastroscopy according to the SNAP-protocol (trial NL7167) [11]. The dual tracer was injected in 4 quadrants around the ESD scar (Figure 1). A scintigraphy was performed fifteen minutes and two hours after injection of the dual tracer. No sentinel lymph nodes could be detected with the scintigraphy, high activity was only found around the injection area (Figure 2).

Figure 1: Dual tracer injection via gastroscopy in 4 quadrants around the ESD scar. A) before injection, B) after injection. 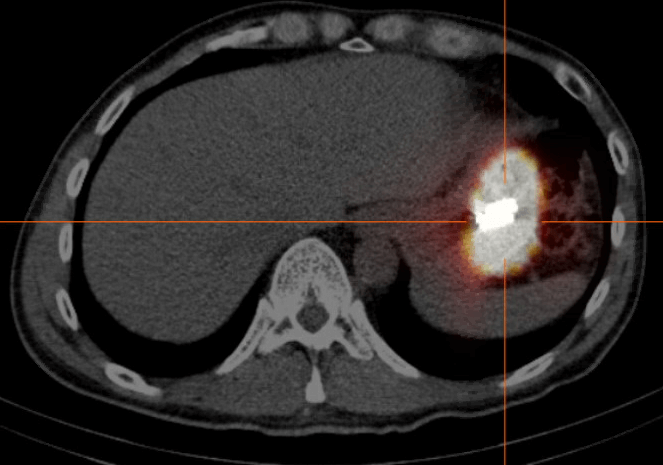 The next day, a robot assisted (Da Vinci Xi) sentinel node procedure was performed. Five “green” lymph nodes were detected in the area of the distal splenic artery (lymph node station 11d), with the use of ICG fluorescence visualized with the firefly camera of the Da Vinci robot. Additionally, a gamma-probe was inserted through one of the trocars to determine the radioactivity (counts per minute) of the “green” lymph nodes. Radioactivity varied between 200 and 800 (cp/s), with the highest radioactivity level (800 cp/s) detected in an enlarged, round lymph node (Figure 3). Intraoperative histological examination using frozen section of the resected lymph nodes revealed the presence of metastasis in this enlarged lymph node. Subsequently, gastrectomy with D2 lymphadenectomy was performed. With the help of the clear visualization of the ESD scar (injection site) in the stomach, we were able to preserve a small remnant stomach, thus sparing the patient a total gastrectomy.

This report describes a successful robot-assisted sentinel lymph node procedure in a Western early gastric cancer patient. A dual-tracer method, including technetium-99 and ICG, was found to accurately identify sentinel lymph nodes intraoperatively. Because of the positive sentinel node, a subsequent gastrectomy was performed with a clear, proven indication. Furthermore, the sentinel node procedure enabled us to spare a small remnant stomach. No sentinel lymph nodes could be detected on the preoperative scintigraphy. However, five “hot” lymph nodes could be easily detected intraoperatively with the ICG fluorescence and the firefly camera. The gamma-probe provided additional information on the level of radioactivity in the separate lymph nodes. Unfortunately, one of the five lymph nodes contained metastasis, resulting in the need for an additional gastrectomy with D2 lymphadenectomy. However, due to the presence of ICG in the injection area, the old ESD scar could be very well visualized, making it possible to perform a subtotal gastrectomy.

Multiple studies have evaluated the safety and feasibility for sentinel node mapping in gastric cancer surgery [9, 12]. The use of dual-tracer methods was found to be the most reliable to identify sentinel lymph nodes in gastric cancer [12-14]. Recently, Mayanagi et al. evaluated the feasibility of using the sentinel basis concept in post-ER gastric cancer patients in a multicenter cohort study [15]. In line with our case presentation, their findings indicated sentinel node mapping in patients who previously underwent ER for gastric cancer to be feasible. Currently, a multicenter prospective trial investigating the feasibility of laparoscopic sentinel basin dissection after non-curative ESD is ongoing in Korea [16].

Author MvBH is consultant for Mylan Johnson and Johnson and Medtronic and received research grants from Olympus and Stryker.

© 2021 Alexander B.J. Borgstein. This is an open-access article distributed under the terms of the Creative Commons Attribution License, which permits unrestricted use, distribution, and reproduction in any medium, provided the original author and source are credited. Hosting by Science Repository. All rights reserved.
DOI: 10.31487/j.IJCST.2020.01.02

Figure 1: Dual tracer injection via gastroscopy in 4 quadrants around the ESD scar. A) before injection, B) after injection.