Recently, many surgical devices have been developed in keeping with the increase of technical requirements in complicated surgical techniques. Especially for electrosurgery, the surgical devices are complex and diverse. It would be strongly believed that these new technologies should be innovated for safe surgical treatment and easy handling, which would lead to the utmost efficiency in surgical units.

For example, one of the latest bipolar vessel sealing tools is effective for hemostasis, which leads to the reduction of blood loss and operative time. A type of bipolar electrothermal coagulation device, LigaSure Vessel Sealing System (Covidien Valleylab, Boulder, CO, USA) has been developed as a safer and more effective technology for surgical treatment compared to monopolar electric knives (Figure 1). The new device consists of forceps and bipolar radiofrequency generator, which exhibits a wide range of precisely regulated currents and enables surgeons to choose a great number of applications, such as monopolar/bipolar cutting and coagulation modes. It has already been widely used in various surgical procedures, not only for craniofacial surgery but also for abdominal surgery [1-8]. 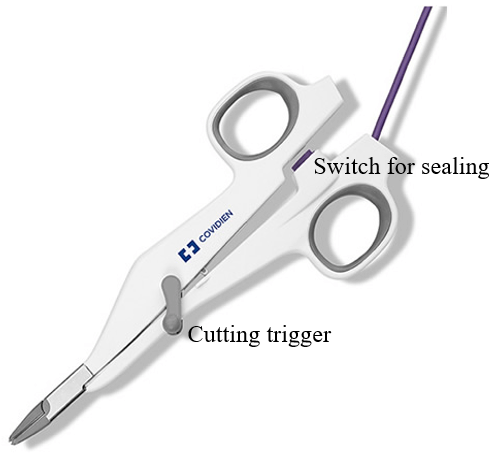 Although its usefulness as a surgical device is well-known, many hospitals in Japan currently (tend to) hesitate to use it except for extended cancer surgery because of surgical-cost-increase due to its price and disposability. Therefore, other devices which allow multiple usages can be one of the solutions, such as ‘marClampCut IQ’ (KLS Martin, Tuttlingen, Germany) [9]. Both ‘LigaSure small jaw’ and ‘marClampCut IQ’ have similar capabilities: tissue dissection, sealing and resection with a single instrument, extremely low thermal lateral spread (less than 2 mm), easy handling and reprocessing.

In this study, both devices, the disposable device ‘LigaSure small jaw’ and the reusable device ‘marClampCut IQ’ (Figure 2), were retrospectively compared and verified with the focus on (1) hemostasis, (2) surgical time and (3) medical expenses for oral cancer patients who received modified total neck dissection in our hospital and related facilities. 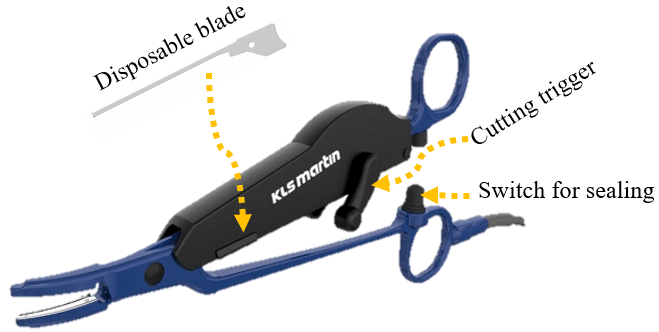 Figure 2: ‘marClampCut IQ’ reusable vessel sealing device. Only blade is discarded after each surgery and the device itself can be sterilized and reused.

Both instruments were used for tissue preparation, vessel sealing, and subsequent tissue resection under standard settings with appropriate electric voltage and current, which were automatically calculated from the impedance level whenever each device would seal the organ during surgery. In addition to the usage, the blades of ‘marClampCut IQ’ were changed for each surgical treatment, and the body was properly sterilized by autoclave at 134°C (273.2°F) for 20 minutes according to ISO 17665-1.

The evaluated points were 1) patients’ age, 2) amount of intraoperative blood loss, and 3) operation time, and all the results were statistically analysed between the ‘LigaSure small jaw’ group and the ‘marClampCut IQ’ group by Mann-Whitney U-test and differences detected by univariate analyses, which were regarded as statistically significant at P < 0.05 (EZR software, Saitama Medical Center, Jichi Medical University, Saitama, Japan) [10]. The cost of each device per surgical treatment was calculated based on the prices determined by the companies. 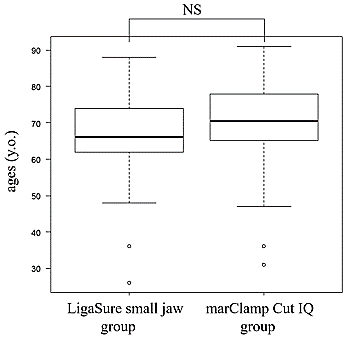 The median amounts of blood loss in the ‘LigaSure small jaw’ group and the ‘marClampCut IQ’ group were 30g (range: 12-56g), and 25g (range: 5-62g), respectively, and the median surgical times of modified total neck dissection (excluding time for resection of carcinoma and reconstruction) of each group were 64 minutes (range: 55-78 minutes) and 62 minutes (range: 49-76 minutes), respectively.

The blood loss in the ‘LigaSure small jaw’ group was significantly different from that in the ‘marClampCut IQ’ group (P = 0.006) (Figure 4). On the other hand, surgical times of the two groups did not show significant difference (P = 0.098) (Figure 5). 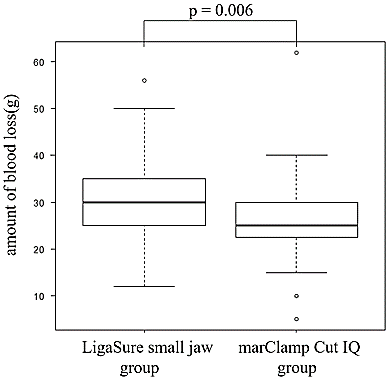 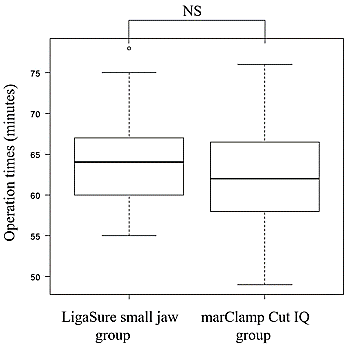 The concept of cost-effectiveness in medical care used to be a taboo for both patients and medical institutes. However, the concept of quality of life has been focused on, and the increase of healthcare expenditure has serious implications and may possibly cause severe financial problems for patients. The importance of cost-effectiveness in medical treatment is now one of the prominent issues in the medical field [11-13]. Moreover, medical institutes have also began considering this issue to balance the increased demand for quality treatment and the financial profit from the medical industry.

On the other hand, the expenditure on healthcare in each country is quite different according to their own system [14]. Owing to the universal healthcare system, the share of the insured individual in Japan is only 0-30% (Link). However, the medical fee system has been revised once in two years, and the financial situation is highly unpredictable due to the increased cost for social welfare in a super-aging society. For example, the medical fee for total neck dissection is currently determined to be 200,800 JPY (approximately 1,900 USD) by the board of National Health Insurance, and the fee of neck dissection is included in that of primary cancer resection. Therefore, the medical fee of resection of primary cancer with or without neck dissection is exactly the same. In this financial circumstance, the concept of cost-effectiveness and reduction of medical cost should also be important for the sake of financial management of hospitals in addition to highly qualified medical service, highly skilled surgical technique, and safety in all the procedures.

Both the devices used in this research are considered suitable for comparative analysis on the basis of many previous reports from many kinds of surgical treatment, not only for craniofacial surgery but also for abdominal surgery [15, 16]. Moreover, to offer the same quality of surgical treatment and avoid bias from technical difference between surgeons, all the procedures for neck dissection were performed by one surgeon (the corresponding author).

In this report, compared to the disposable device ‘LigaSure small jaw’, the reusable device ‘marClampCut IQ’ provided similar clinical efficacy for modified neck dissection, and the cost per surgical procedure was significantly reduced to the level of one-quarter.

This clinical study was retrospectively evaluated using approved devices. Therefore, ethical approval by the Institutional Board of Tsurumi University Dental Hospital was not required.

The approval for publication was obtained from all patients.

© 2019 Koji Kawaguchi. This is an open-access article distributed under the terms of the Creative Commons Attribution License, which permits unrestricted use, distribution, and reproduction in any medium, provided the original author and source are credited. Hosting by Science Repository. All rights reserved.
DOI: 10.31487/j.JSO.2020.04.05

Figure 2: ‘marClampCut IQ’ reusable vessel sealing device. Only blade is discarded after each surgery and the device itself can be sterilized and reused.