Prostate Artery Embolisation as a Palliative Care in a Patient with Prostate Cancer: A Case Report

Introduction: Prostate artery embolization is an emerging technique, that appears to be a promising option in the management of benign prostatic hyperplasia for patients unsuitable for surgery. Prostate artery embolization, similar to all other interventions, is not a suitable treatment for all patients with this disease. It is indicated as a minimally invasive option in patients unfit to undergo trans urethral resection of prostate.
Case Report: A 78-year-old male suffering from castrate resistant prostate cancer and on treatment with Abiraterone plus prednisolone presented to the Uro-oncological services of the hospital with difficulty to void, incomplete voiding, and sense of incomplete voiding. He had other medical co-morbidities which included Diabetes mellitus, hypertension, and ischaemic heart disease. His cardiac ejection fraction was 25% and was advised not to undergo any surgical procedure. Serum creatinine on admission was 2.2 mg% and serum PSA were 26.5 ng/ml. Under local anaesthesia, using retrograde Seldinger’s technique right common femoral arterial access was obtained and 6F vascular introducer sheath was placed. Bilateral pelvic angiogram was performed, each of the prostatic arteries was superselectively catheterized and the prostatic gland was embolized using PVA (polyvinyl alcohol) particles 200μm. Post catheter removal the patient voided well with a maximum flow of 14.5 ml/sec.
Conclusion: Prostate artery embolization can successfully treat complications associated with prostate cancer such as LUTS, urinary retention and haematuria with a low risk of serious adverse events.

Prostate artery embolisation (PAE) is a non-surgical procedure used in the treatment of an enlarged and troublesome prostate by blocking off the arteries that feed the gland and making it shrink. It is usually performed by an interventional radiologist and forms an alternative to a TURP (trans urethral resection of prostate) operation. Prostate artery embolisation (PAE) is a safe and effective procedure and has proved its efficacy in the treatment of Benign prostatic hyperplasia (BPH) [1].

Gradually the procedure of PAE has been gaining popularity in the western world as there is greater awareness and acceptance among the clinicians and patients in recent times. DeMeritt et al., was the first to perform embolisation of the prostate for management of post-biopsy haematuria in a case of BPH in the year 2000 [2]. Carnevale et al. performed the first PAE for BPH and demonstrated symptomatic improvement and volume reduction of the prostate in two patients in 2010 [3].

PAE has been shown to be successfully used in treating bleeding from the prostate in the context of prostatic cancer. It has also been used in advanced prostate cancer, in patients not suitable for radiotherapy or surgery. PAE appears promising in controlling hematuria, which is a notoriously difficult condition to treat. Controlling hematuria in patients with inoperable cancer allows an improved quality of life (QOL) but may need repeat procedures [4]. We report a case of castrate resistant prostate cancer with severe lower urinary tract symptoms, unfit for surgery, and treated with PAE.

A 78-year-old male suffering from castrate resistant prostate cancer and on treatment with Abiraterone plus prednisolone presented to the Uro-oncological services of the hospital with difficulty to void, incomplete voiding, and sense of incomplete voiding. He was diagnosed with metastatic prostate cancer 49 months back and had undergone androgen deprivation therapy in the form of bilateral orchidectomy plus oral bicalutamide. Progressive rise in serum prostate specific antigen (PSA) levels were noticed 12 months back. Patient was put on oral Abiraterone plus prednisolone since then. Patient was having obstructive lower urinary tract symptoms since the past 9 months and was put on oral Silodosin. 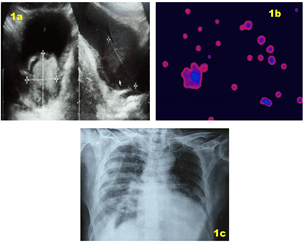 Patient had other medical co-morbidities which included Diabetes mellitus, hypertension, and ischaemic heart disease. His cardiac ejection fraction was 25% and was advised not to undergo any surgical procedure. Serum creatinine on admission was 2.2 mg% and serum PSA were 26.5 ng/ml. Ultrasonography of the abdomen revealed a 61 cc prostate (Figure 1a). A sample of freshly voided urine was collected and sent for identification of urinary biomarker for prostate cancer (presence of VPAC receptor molecules) (Figure 1b). Following per urethral catheterization the serum creatinine levels dropped down to 1.7 mg% after 48 hours. In view of the patient’s heart condition, several options were discussed with him, which included long term per-urethral catheter, supra-pubic catheter and PAE. The advantages and disadvantages were discussed, and the patient chose PAE. 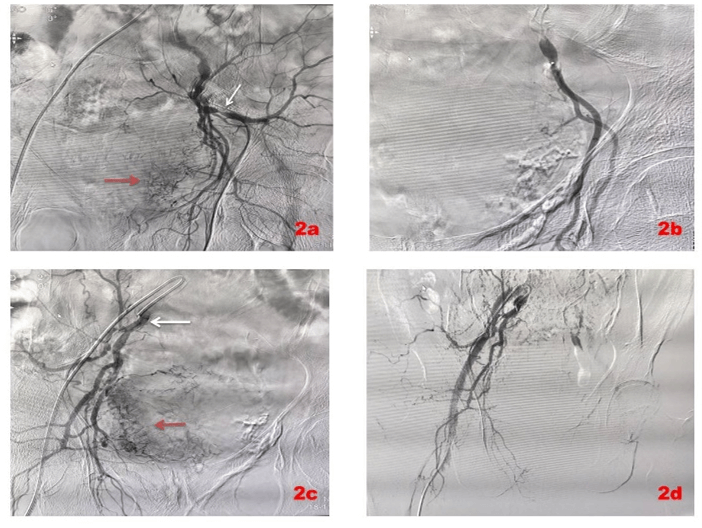 Patient tolerated the procedure well and there was no untoward reaction to contrast media. Right common femoral arterial sheath was removed at the end of procedure and haemostasis achieved at puncture site by digital compression. Per urethral catheter was removed on the 5th post-embolization day. Patient voided well with a maximum flow of 14.5 ml/sec and post-void residue was less than 30 cc. In the follow-up period (8 months), the patient voided well with no episodes of acute retention of urine, haematuria, or infection. The patient was advised the use of Enzalutamide in place of abiraterone plus prednisolone as prednisolone causes retention of sodium and fluids. 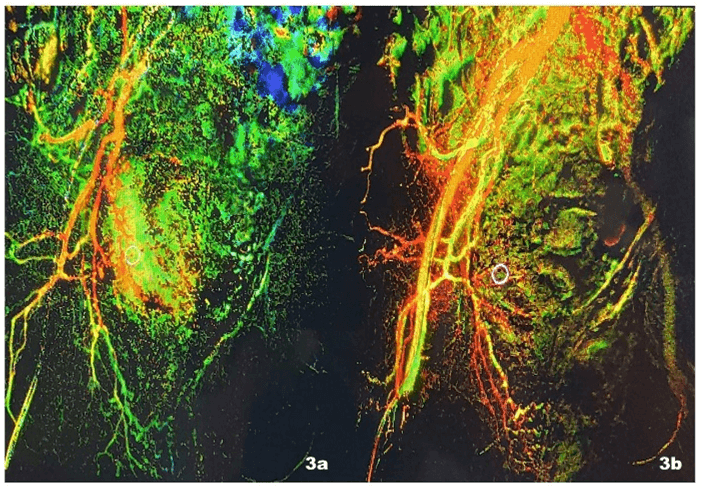 Palliative care is a team approach to improve the quality of life of patients and their families who face long-term and progressive illnesses, through prevention and relief of suffering with symptomatic management [5]. The focus of palliative care is to take care of: morbidities associated with the disease, morbidities associated with the treatment, and quality of life of the patient. While taking care of patients with cancer, palliative care must be initiated “early in the course of illness in conjunction with other therapies that are intended to prolong life, including chemotherapy and radiation” [6]. Prostate cancer because of its long disease course, which is often non-lethal and progressive in nature, is particularly amenable to palliative symptom management.

PAE works by causing irreversible necrosis of prostatic adenomatous tissue, which causes the gland to shrink and soften, especially in the central periurethral tissue, thereby relieving pressure on the prostatic urethra and diminishing obstruction to urinary outflow. Pioneering groups led by Dr. João Pisco in Portugal and Dr. Francisco Carnevale in Brazil forged forward with numerous studies demonstrating safety and remarkable efficacy of the PAE technique for treating BPH [3, 11, 12].

Several experts have also proposed adjunctive roles for PAE in the setting of prostate cancer treatment. Embolization prior to radical prostatectomy could lead to less bleeding during surgery, a smaller cystotomy and improved urinary continence after radical prostatectomy. PAE has also been successfully used to control prostatic bleeding after radiation therapy.

Urinary retention and persisting LUTS even after medical management are the commonest indications for palliative TURP in patients with cancer of the prostate [13]. PAE offers an effective and minimally invasive option in patients who are unfit to undergo TURP. Malling et al. reported on the efficacy and safety of palliative PAE on LUTS or urinary retention in men with advanced prostate cancer [14]. Bilateral embolization was achieved in ten cases, and urinary retention resolved in one of six patients. LUTS improved in the remaining (n = 5) patients by a mean 12.2 point reduction in IPSS (95% CI - 23.53: - 0.87). The authors concluded that palliative PAE was safe and efficient for treatment for LUTS associated with prostate cancer. In conclusion, PAE can successfully treat complications associated with prostate cancer such as LUTS, urinary retention and haematuria with a low risk of serious adverse events [15].

© 2021 R. B. Nerli . This is an open-access article distributed under the terms of the Creative Commons Attribution License, which permits unrestricted use, distribution, and reproduction in any medium, provided the original author and source are credited. Hosting by Science Repository. All rights reserved.
DOI: 10.31487/j.OCR.2020.01.02