Personality Disorder as the Initial Presentation of a Complicated Endocarditis: Diagnostic Challenges in the CARDIO-PSYCHIATRY

Background: Bacterial endocarditis is a rare infectious entity with a very heterogeneous clinical spectrum; neurological manifestations are the most frequent and serious extracardiac complications of infective endocarditis. However, little is known about the psychiatric manifestations and / or sequels due to septic embolism of the infective endocarditis.
Case Report: 50-year-old male, history of arterial hypertension and nephrolithiasis with recurrent urinary tract infections. He began his condition with behavioral changes characterized by marked impulsivity and instability in his interpersonal relationships, adding repetitive events of fever and nephrolithiasis requiring urological interventions and antibiotic therapy. Upon admission assessed by psychiatry because of his impulsive behavior and emotional changes with the presumptive diagnosis of borderline personality disorder.
Conclusion: In the following work we describe the first case found in the literature of a psychiatric manifestation in a male patient as the initial complication of a subacute bacterial endocarditis, his diagnostic approach, clinical picture and therapeutic outcome. The early recognition of the clinical picture and the diagnostic approach allowed to establish effective antibiotic treatment; to recognize that bacterial endocarditis might present in a multifaceted way allows to suspect this disease and give treatment opportunely to reduce its burden and mortality.

Infective Endocarditis (I.E) is an uncommon but well study disease that can affect multiple systems and organs, associated by an infection (bacteria most of the time) of the enodcardial surface [1]. The incidence of I.E has increased recently in the last decade, associated with the more prevalence of immunosuppressive patients, poor controlled diabetes mellitus and intravenous drug users [2]. Also, the increase in the survival of patients with congenital heart defects, the different cardiac implantable device, the continued burden of sepsis and malpractice of antibiotic overuse are other well recognized factors that should elevate the suspicion of I.E. Since the first reports of Sir William Osler in 1885, the understanding of the pathophysiology has been well studied along with the diagnostic criteria and different therapeutic opportunities [3].

Nonetheless, the disease remains to be a challenge for the physician because of the multifaceted clinical presentation and multiple system and organs that can be affected at the beginning of the disease alongside its different prognosis and evolution depending on the microbiology of the I.E and its initial complications [1]. Because the neurological complications are the most frequent ant lethal form of extracardiac I.E , we report the first case to our knowledge, of a 50-year-old man who presented at the emergency department with sub-acute behavioral changes and a presumptive diagnosis of Borderline Personality Disorder (B.P.D) made on the initial examination [4]. He was admitted to hospitalization and after 2 weeks of study, we made the diagnosis of I.E with neurological embolic events causing the psychiatric symptoms in the patient.

A 50-year-old Mexican man with history of hypertension and nephrolithiasis with recurrent urinary tract infections presented to our emergency department brought by his sister because of behavioral changes characterized by marked impulsivity and instability in his interpersonal relationships. The sister whom lived with him at the moment of the first clinical examination reported that his brother started to “change” and that he was acting weird since 2 months ago. She also referred that 4 months ago he had presented a pyelonephritis associated with bilateral nephrolithiasis that required urological interventions with a Double J stent placement, she also reported fever above 38.3C at least two times in the week before his admission. Because of his behavioral changes he was taken to the psychiatric service with an initial diagnosis of B.P.D. Later on, cardiology and internal medicine services were consulted.

Figure 1: MRI that shows the 2 lesions that represented the biological substrate of the signs and symptoms of the patient.

On examination, we found a male patient with a notable neurological examination, with 14 points in the Glasgow scale because of a confused verbal response, with a transcortical motor aphasia, his cranial nerves were normal, motor system and sensitive showed no alterations, we didn’t find cerebral involvement. The rest of the exploration and systems showed no other problems. A complete blood count and HIV test were negative. A urinary dipstick test was positive and C-reactive protein (CRP) alongside erythrocyte sedimentation rate (ESR) were increased. Electrocardiography showed no pathological signs. Magnetic resonance imaging (MRI) revealed two lesions, the first one, an acute parietal/occipital infarct of the medial left cerebral artery (posterior/angular parietal branches) and a subacute frontal medial right artery infarct (pre-central branch) as shown in (Figure 1).

Figure 2: Transthoracic Echocardiography that shows the aortic vegetation and the degree of regurgitation it produced on the naïve aortic valve.

Following a standardized protocol in the approach of a stroke in a 50 year-old patient, transthoracic echocardiography was performed which showed two lesions in the left ventricle, the first one attached to the mitral valve (4mm x 5mm) suggestive of a vegetation and the other one in the aortic valve (8mm x 7mm), both suggestive of vegetation’s associated with endocarditis and hemodynamic changes as shown in (Figure 2). Later on, blood cultures were positive on day two of empirical treatment with vancomycn for “Enterococcus. Faecalis”. Antibiotic treatment was indicated based on the antibiogram an later on he was referred to the cardiothoracic surgery team for evaluation (Figure 3). 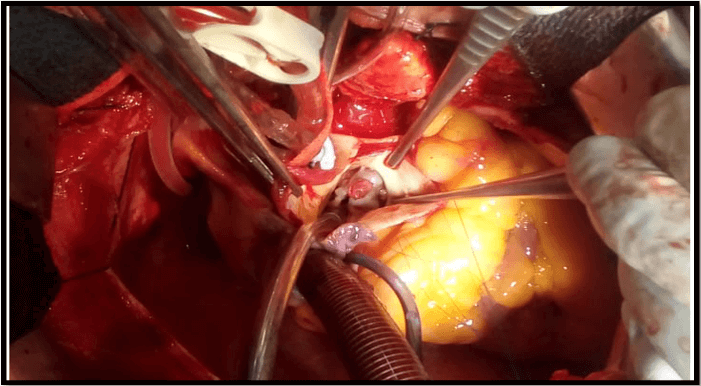 Figure 3: Operative management by the cardiothoracic team the moment the aortic naïve valve was being removed.

One month after the initial evaluation in the emergency department, his diagnosis protocol was concluded, and the cardiothoracic surgery team decided to plan an urgent procedure with bilateral retirement of mitral and aortic vegetations with also bilateral replacement of naïve valves with synthetic ones. His post-surgery follow-up and eventual evolution in the outpatient setting have been remarkable positive at 6 months follow-up. The neuropsychiatric team has addressed his psychiatric symptoms and behavioral changes and he continues rehabilitation with a good prognosis.

I.E continues to be a disease that requires a high degree of suspicious by the physician; here, we present a case report of an endocarditis with neuro-psychiatric symptoms as the first manifestation of the disease. Since the first reports of Osler in 1885, we couldn’t identify a case report publication of I.E diagnosis associated with the presumptive diagnosis of a personality disorder as an initial complication of the disease. 25% of the patients with I.E can present neuro-psychiatric symptoms nonetheless, since the clinical picture can be so heterogeneous, one doesn’t assume that behavioral changes in a sub-acute fashion are responsible because of an I.E [5].

We have report a case of a 55-year-old man who presented with an atypical pattern of instability of interpersonal relations, self-image, and affects in a 2-month period; these symptoms are compatible with the B.P.D. Nevertheless, the patient didn’t present these changes in his early childhood. Personality is the combination of characteristic and qualities that form an individual character and makes him different from the others; MRI studies of the brain have demonstrated front-limbic circuits involved in the pathology of the B.P.D so we do recognize the biological substrate of this disease as the responsible of the clinical findings presented in this case [6].

The treatment of the disease requires the management by a team of cardiothoracic surgery; whether or not a B.P.D, there was an urgent need to retire the vegetations because of the history of two silent like strokes in the history of the patient [7]. It’s of great importance to report the post-surgery evolution of our patient, since the actual knowledge of the post-surgery prognosis and evolution are yet to be understood totally. In our case, the patient first received a 10 days course of antibiotic therapy direct to the microbiology agent detected prior to surgery, also, the strokes had presented at least two before the surgery and the patient didn't had clinical heart failure symptoms which give him a better prognosis.

I.E diagnosis is straightforward in patients who present with the typical sustained bacteremia, evidence of active valvulitis, immunological phenomena and peripheral emboli on end organs, but this is the minority of the patients.

That’s why we think that a new set of clinical signs and symptoms (neuro-psychiatric) might be added to the well-recognized diagnostic criteria for endocarditis (Duke’s Criteria) because these are sometimes the first manifestations of the disease. The neurological complications of I.E have been well studied, but the management, prognosis and evolution of psychiatric complications haven not been well established; we justify these work the moment we were able to demonstrate the relationship with a frontal-limbic brain lesion and the septic embolism because of an I.E .

M.Z presented this work at the 2019 National Internal Medicine Congress celebrated in Acapulco, Guerrero, México. All of the authors read and approved the final manuscript.

© 2021 Mario Zuñiga. This is an open-access article distributed under the terms of the Creative Commons Attribution License, which permits unrestricted use, distribution, and reproduction in any medium, provided the original author and source are credited. Hosting by Science Repository.
DOI: 10.31487/j.CDM.2020.01.02

Figure 1: MRI that shows the 2 lesions that represented the biological substrate of the signs and symptoms of the patient.

Figure 2: Transthoracic Echocardiography that shows the aortic vegetation and the degree of regurgitation it produced on the naïve aortic valve.

Figure 3: Operative management by the cardiothoracic team the moment the aortic naïve valve was being removed.