Background/Aims: Lymph node metastasis has been considered very rare in gastrointestinal stromal tumors (GIST), especially in low grade GIST. Thus, lymphadenectomy is not required routinely as standard of care during surgery for GIST unless there is suspicion for lymph node metastasis. However, herein we present a low grade PDGFRA mutated GIST status post imatinib chemotherapy with nearly complete response in the primary tumor but a persistent lymph node metastasis which significantly affected the management of the patient.
Case Report: A 38-year-old male presented with a 11.5 cm epigastric GIST status post imatinib (Gleevec) treatment who underwent partial gastrectomy with tumor excision. The initial biopsy showed epithelioid type GIST with a low mitotic rate and PDGFRA gene mutation detected by genetic analysis. The original tumor had nearly complete response to imatinib with a few possible residual tumor cells identified; however, one lymph node was found to be positive for metastatic GIST with minimal treatment effect present. The patient was managed with continuous imatinib treatment and life-long follow up.
Conclusion: This case raises the awareness of the possibility of lymph node metastasis in low grade conventional GIST with PDGFRA mutation. Lymph node examination may need to be considered as standard of care for better management of patients with GIST.

Gastrointestinal stromal tumor (GIST) is the most common mesenchymal tumor of the gastrointestinal tract. GIST accounts for 2.2% of malignant gastric tumors in the National Cancer Institute SEER incidence database. There is no gender preference (M:F, 1.1:1) in contrast to gastrointestinal carcinoma which has a M:F of 2:1, GISTs most commonly arise from the stomach (60-70%), which account for about 1% of gastric malignancies, followed by small intestine (20-30%), colorectum and esophagus (together less than 10%) [1-3]. The precursor cells of GIST have been proposed to be the interstitial cells of Cajal (ICC) [4]. The incidence of GIST is reported as 10 to 20 per million and mostly occurs in adults over 40 years old (median age 55-60 years), although even in newborns and childhood has been reported [5, 6]. The mainstay of primary treatment for GIST is microscopically margin-negative resection. Due to the rarity of lymph node metastasis, lymph node dissection is not routinely performed [7]. Approximately 95% of GISTs have the expression of C-KIT protooncogene [8]. A tyrosine kinase inhibitor, imatinib (Gleevec), which blocks KIT proteins, is the main agent for targeted adjuvant and neoadjuvant treatment as well as used for palliation. Risk assessment after surgical resection determines the need for adjuvant imatinib treatment. Currently, main indications for adjuvant imatinib treatment are unresectable or metastatic disease [9]. Herein, we have reported a case of gastric low-grade epithelioid GIST post imatinib and surgical therapy which was found to have metastasis in a lymph node to emphasize the importance of lymph node examination in the management of patients with GIST.

A 38-year-old male presented with a mass in his abdomen for one year. The mass was in the epigastric area and had been growing. Patient underwent CT scan of the abdomen and pelvis which revealed a 14 cm mass in the epigastric area involving the stomach and pancreas and abutting the left lobe of the liver. Fine needle aspiration of the tumor showed epithelioid cells with low mitotic activity and Ki-67 index and positive immunohistochemistry stain for C-KIT , confirming a diagnosis of epithelioid GIST. The tumor was negative for CD30, CD20, S100, cytokeratin and CD138. Genetic analysis was performed at Caris Life Sciences and revealed a PDGFRA mutation. No other mutations were detected. Considering the large size and marginally resectable nature of the tumor, the patient was treated with imatinib (Gleevec) 400 mg for four months as the first-line therapy. Follow up CT scan revealed good response to therapy with decreased size of the mass and no FDG activity of the tumor on PET scan. The case was discussed at our institution multidisciplinary tumor board and the decision was made to proceed with surgical resection. Patient underwent distal partial gastrectomy with gastrojejunostomy and radical tumor debulking. The patient recovered from the surgery uneventfully without complications.

The surgical specimen consisted of a segment of stomach with a 11.5 x 8.5 x 7.0 cm, well circumscribed, encapsulated mass attached to the stomach at the lesser curvature. Upon serially sectioning the mass revealed marked tissue necrosis with multiple fluid filled cystic spaces that ranged from 0.2-6.0 cm in greatest dimension occupying about 90% of the mass. Some cysts filled with clear tan-brown fluid and others filled with chalky light brown purulent material. The solid area of the tumor showed heterogenous gelatinous area intermixed with tan-red haemorrhage. The specimen was thoroughly examined for lymph nodes and the solid tumor area with the resection margins were extensively submitted for microscopic examination.

The metastatic GIST cells were strongly positive for C-KIT (Figure 1E), confirming the diagnosis of GIST. There was no mitosis identified and Ki67 proliferative index was less than 1% (Figure 1F). The GIST cells were negative for Dog1. The final pathology diagnosis was gastrointestinal stromal tumor, epithelioid type, low grade, post neoadjuvant therapy with treatment effect present and 1% viable tumor, and metastatic GIST in one out of six lymph nodes. The pathology stage was ypT4N1. This case was discussed in the multidisciplinary tumor board and a decision was reached to continuously manage the patient with adjuvant imatinib treatment and life-long follow-up. 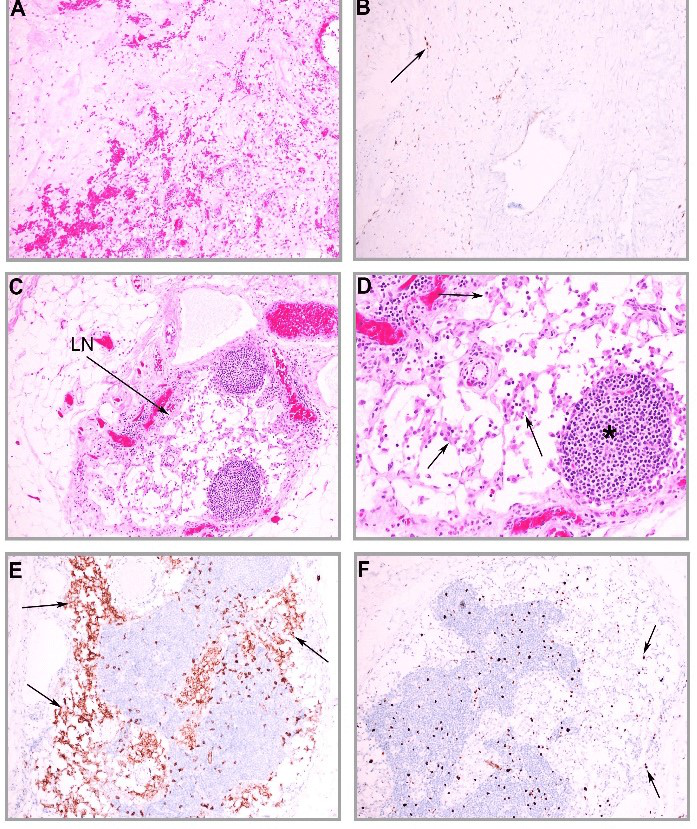 GISTs are a distinctive subgroup of gastrointestinal mesenchymal tumors which are driven by specific gene mutations. The most common gene mutations in GISTs are C-KIT exon 11 mutations which are found in about 60-65% of cases and generally respond to treatment with imatinib better than mutations in other exons. In about 5-8% of all GISTs, C-KIT is not mutated, instead, a closely related gene PDGFRA is mutated. And about 30% of the PDGFRA mutated GISTs may still respond to imatinib and sunitinib (Sutent)/regorafenib (Stivarga) [8, 10, 11]. About 15% of GISTs do not have a mutation in the C-KIT or PDGFRA gene. These C-KIT or PDGFRA wildtype GISTs today can be further classified into SDH-deficiency, NF1, BRAF, NRAS/KRAS/HRAS, FGFR1 or NTRK fusion mutations, and often with therapeutic implications [11]. The present case had a PDGFRA mutation and expression of C-KIT that had responded well to imatinib neoadjuvant therapy except the metastatic focus in the lymph node.

In general, patients with GIST need to be managed by a multidisciplinary team with expertise in tumors of the gastrointestinal tract. Surgery remains the mainstay of treatment in patients with localized, resectable GISTs. The principle of surgery for GISTs is complete R0 resection with microscopically negative margin of the tumor and with an intact pseudocapsule. Tumor rupture or R1 resection of the primary tumor has a negative impact on disease free survival [12]. Aparicio et al. reported lower local recurrence rates with segmental resection of the stomach compared to wedge gastric resection even in patients whom R0 resection was obtained [13].

Anatomic gastric resection, formal lymph node dissection, and wider resection of uninvolved tissue have not been considered beneficial. The standard of care for patients with GISTs has rapidly advanced after the introduction of effective targeted therapies using tyrosine kinase inhibitors, such as imatinib and sunitinib. Preoperative neoadjuvant imatinib treatment for localized GIST is a matter of judgement by a multidisciplinary expertise and is recommended for both large tumors and poorly positioned small GISTs that are considered marginally resectable on technical grounds. The present patient had a large gastric GIST with adhesion to pancreas, thus was treated initially with neoadjuvant imatinib to downstage the tumor and then underwent partial gastrectomy with R0 resection. The management of this patient followed the standard recommendation and the postoperative course of the patient was uneventful.

© 2019 Belinda Sun. This is an open-access article distributed under the terms of the Creative Commons Attribution License, which permits unrestricted use, distribution, and reproduction in any medium, provided the original author and source are credited. Hosting by Science Repository. All rights reserved.
DOI: 10.31487/j.AJSCR.2020.03.10