We describe a case of a 55-year-old woman with a rare metastatic micropapillary low-grade serous ovarian cancer who had been heavily pretreated. A KRAS-mutation and c-MYC-amplification were detected, and we initiated a therapy with the CDK4/6- inhibitor Palbociclib in combination with the steroidal aromatase inhibitor exemestane. We postulated that the combination therapy leads to a blocking of the c-MYC-amplification-activated cell cycle, proliferation, and inhibition of apoptosis, further enhanced by other oncogenes like mutated RAS. This therapy showed a good and lasting response representing a new opportunity for therapy in heavily pretreated metastatic micropapillary low-grade serous ovarian cancer.

Palbociclib and exemestane are active in pretreated low-grade serous ovarian cancer Case. We report a case of a 55-year-old patient diagnosed in May 2013 with a rare micropapillary low-grade serous ovarian cancer FIGO IVB with lymph node metastases and hepatic tumor spread. After cytoreductive surgery, a palliative chemotherapy with carboplatin and paclitaxel was initiated. After 3 cycles of chemotherapy, the tumor marker CA-125 dropped from 2940 kU/l postoperatively to 1030 kU/l at the end of the chemotherapy. The relative contribution to the marker reduction of cytoreductive surgery and of postoperative chemotherapy remains unknown. In November 2013, suspected progressive disease was not proven intraoperatively and on histology: small intestine obstruction requiring about 50%- resection of the small intestine and adhesiolysis was performed, the multiple biopsies were sent for examination. Postoperatively, the CA-125- level declined to 747 kU/l followed by a long therapy-free interval but rising CA-125 was observed. In February 2015, 1.5 years after primary diagnosis, progressive peritoneal carcinosis with again elevated CA-125 up to 2360 kU/l was diagnosed (Figure 1).

A second line combination-therapy with carboplatin, gemcitabine, and bevacizumab followed by bevacizumab-maintenance was administered. CA-125 first increased (2440 kU/l) but dropped eventually resulting in biochemical (CA-125 1180 kU/l) response accompanied by partial response on imaging. A secondary tumor debulking was carried out followed by resumption of the second-line therapy with gemcitabine and platinum. After 1.5 years, in December 2017, clinical and laboratory follow-up revealed hydronephrosis on the right side, and intestinal obstruction with an arising tumor marker required a third tumor-debulking. The patient then sought advice in our hospital. We investigated series of immune- and gen-aberration-tests: a molecular analysis by gene-panel Oncomine Focus® using Ion Torrent platform showed the typical genetic features of low-grade serous ovarian carcinoma including KRAS-mutation (c.35G>T) p.G12V, exon 2, but no other specific marker has been found except for a c-MYC amplification. Mismatch-repair-proteins were preserved, and microsatellites BAT25/26, NR21/24, Mono27 were stable. The PD-L1-expression shows a tumor proportion score (TPS) of 0%. No BRCA 1/2 or BRAF-mutations (Oncomine BRCA Assay®/ThermoFisher®) were detected. ER-expression 100% and PgR 0%. 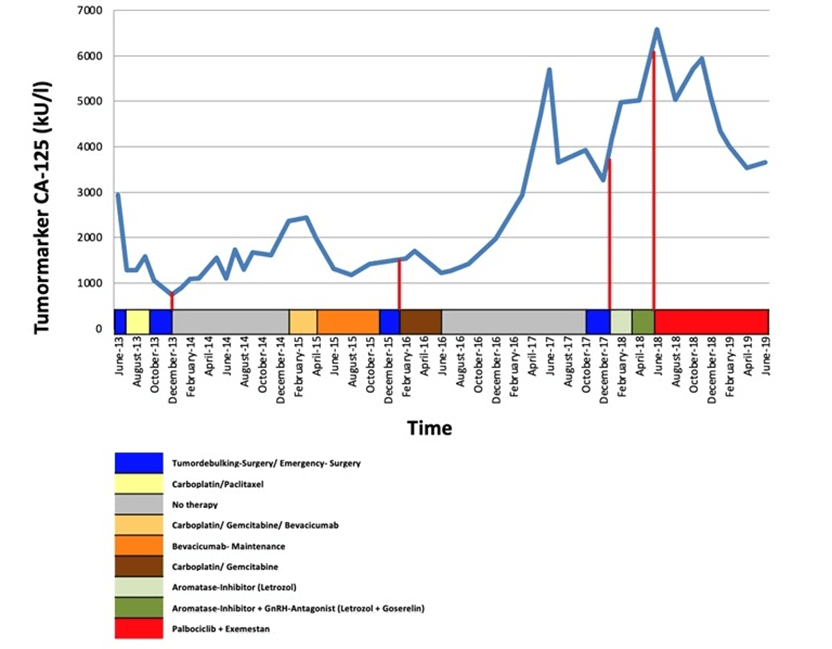 Palliative endocrine therapy with letrozole was started, and to make the best use of endocrine therapy, we initiated a GnRH-Analogue therapy with goserelin as ovarian cancer cells carry LHRH-receptors and were demonstrated to be occasionally effective in epithelial ovarian cancer [1]. But this approach resulted in failure with a mixed response of different tumor lesions on imaging after 3 months of treatment and definitive tumor progression after 6 months. The tumor-marker CA-125 increased while on these two drugs. Finally, we decided to continue endocrine treatment and to initiate off-label therapy with the CDK4/6- Inhibitor palbociclib in combination with the steroidal aromatase inhibitor exemestane in June 2018. For more than 10 months, our patient shows a sustained stable disease on CT-scan with continuously falling levels of the tumor marker CA-125. Palbociclib was started with a dose of 125mg day 1 to 21 with a cycle of 4 weeks together with exemestane 25mg peroral daily. Due to diarrhoea grade 3 despite adequate symptomatic treatment the CDK4/6-inhibitor was reduced to 100mg/day.

The treatment is still well tolerated, a pre-existing and sustained diarrhoea grade 2 remains probably due to short bowel syndrome after repeated surgery and is treated with loperamide and opioid tincture. To our best knowledge, this is the first report of therapy with a CDK4/6-inhibitor in combination with endocrine therapy in the rare case of metastatic low-grade serous ovarian cancer failing 2 lines of standard chemotherapy, bevacizumab-maintenance, and endocrine therapy goserelin. Low-grade ovarian cancer is known as the 4th most lethal cancer type in women, and the gynaecological malignancy associated with the highest mortality. The most common histological subtype of ovarian cancer is the serous carcinoma which has to be subdivided into low-grade and high-grade with differences in the pathogenesis, immunohistochemistry, clinical and molecular levels, prognosis, and outcome [2].

In contrast to the high-grade serous ovarian cancer with origination from the fallopian tube fimbria end, poor outcome, advanced FIGO-stadium and with up to 97% harbouring p53-mutations, low-grade serous carcinoma may arise de novo or develop stepwise from borderline tumors with low malignant potential, are diagnosed approximately in 70% in advanced stages FIGO III and IV, compromises 10% of all serous carcinomas and with an characteristic evidence of KRAS-mutations in the MAP-Kinase-pathway, higher expression of ER and PR and lower expression of p53, Ki-67 and HER2/neu [3-7]. The clinical behaviour of the low-grade serous carcinomas is also characterized by an early age of diagnosis (46.9 vs. 63 years) and prolonged median 5-years overall survival (OS) in comparison to the high-grade subtype (54.2 % vs. 32.1%) for FIGO III/IV and relative resistance to chemotherapy [8].

In 2004 the M.D. Anderson Grading System for ovarian serous carcinoma was reported. Typically, low-grade types show mild to moderate nuclear atypia and a mitotic index of maximum 12 mitoses/10 high power field (HPF). In contrast high-grade carcinomas are described as with marked nuclear atypia and a mitotic index of > 12 mitoses/10 HPF. In 1996 the micropapillary serous carcinoma (MPSC) was first described by Burks et al. as a subset of well differentiated ovarian carcinomas without destructive infiltrative growth but with more progressive invasive malignant behaviour than that of the typical serous borderline tumors, typical morphology shows a micropapillary architecture [9]. This subset should be separated from the typical serous borderline tumors and the invasive serous types of ovarian cancer [10]. Micropapillary features are present in 10 to 15 percent of serous borderline tumors, as well as in other types of benign and malignant serous ovarian tumors and are associated with an increased likelihood of recurrence and invasive peritoneal spread. The clinical management of low-grade ovarian cancer has been based on the critical role of surgery with the aim of complete primary resection, especially in early stages, traditionally followed by platinum-based chemotherapy.

In advanced stages primary surgery followed by chemotherapy or neoadjuvant chemotherapy with interval debulking chemotherapy or primary chemotherapy with taxane/platinum have been traditionally standard treatments. But a relative chemoresistance is known in low-grade serous ovarian cancers relative to high-grade serous subtypes, limiting the role of chemotherapy [11]. With focus of the treatment options for patients with recurrent or metastatic disease of this subtype of cancer, relevant to our case, these are to date chemotherapy (platinum-based or pegylated liposomal doxorubicin), secondary cytoreduction, the angiogenetic treatment with bevacizumab in addition to chemotherapy or as monotherapy, hormonal therapies, and a phase 2 (GOG-0239-trial) was done with the MEK-Inhibitor selumetinib [11-18]. Comparing selumetinib with chemotherapy and hormonal therapy, the targeted therapy showed a longer median PFS, higher partial response rate and a higher clinical benefit [19].

There are several phase 3 trials ongoing with proof of targeted therapies in low-grade ovarian cancer, e.g., with the MEK-Inhibitor trametinib [20]. CDK4/6-inhibition is an emerging cytostatic therapy targeting cell cycle progression and is already well known and used in the treatment of metastatic, hormone-sensitive breast cancer with an overall- and progression-free survival benefit [21]. Preclinical studies in cell cultures and mouse models proved that CDK4/6-inhibitors are active against a broad spectrum of solid tumors other than breast cancer, including non-small cell lung cancer, glioblastoma multiforme, oesophageal cancer, liposarcoma, rhabdomyosarcoma and melanoma. A deregulation of the cyclin-dependent kinases 4 and 6 (CDK4/6)-p16-retinoblastoma- signaling pathway is commonly found in ovarian cancer and associated with worse prognosis. In a phase-II study the efficacy and safety of palbociclib in patients with recurrent ovarian cancer was tested and reported to be well tolerated and demonstrated single-agent activity in heavily pretreated, unselected ovarian cancer patients [22]. Recently a publication on CDK4/6 inhibitors targeting SMARCA4-determined cyclin D1 deficiency in hypercalcaemic small cell carcinoma of the ovary reported a promising potential effective treatment strategy in this type of rare ovarian cancer [23].

In our case, we observed a prolonged tumor-control with decreasing tumor-marker and without the need for further therapy after conducted surgery in the beginning of the disease. Chemotherapy had limited success, as indicated by the failure to lower CA-125 effectively and sustainably. Tumor-control clinically was not long-lasting. First-line endocrine therapy with the aromatase-inhibitor showed no impact, also not in combination with a GnRH-analogue agonist. Taking into account these facts and the mentioned study results and in consideration of the lack of effective therapy options, we decided to initiate CDK4/6-inhibition with palbociclib in combination with the steroidal aromatase inhibitor exemestane.

In the complex pathway systems c-MYC, first described in a highly proliferative tumor, the Burkitt-lymphoma, affects the cell cycle at multiple different points, in particular the activation of CDK4/6. A c-MYC- amplification with consecutive overexpression of c-MYC leads to the activation of the cell cycle, proliferation, and inhibition of apoptosis, which may be further enhanced by activation of other oncogenes such as mutated RAS [24]. The activation of the upstream mitogenic pathways PI3K-AKT-mTOR, RAS-RAF-MEK-ERK and estradiol result in increased cyclin D-dependent CDK4/6 activity has been reported [25]. CDK4/6-inhibitors directly inhibit the activity of these upstream pathways. This strong rationale was the basis for our combination therapy. The CDK4/6-inhibitor palbociclib blocks the KRAS mutation caused activation of the CDK4/6-production and therefore results in a stabilization of the c-MYC pathways activated by MYC-amplification, eventually resulting in an inhibition of the proliferation and increase apoptosis.

© 2021 Beat Thürlimann. This is an open-access article distributed under the terms of the Creative Commons Attribution License, which permits unrestricted use, distribution, and reproduction in any medium, provided the original author and source are credited. Hosting by Science Repository. All rights reserved.
DOI: 10.31487/j.CROGR.2020.03.04