Ovarian Teratoma as an Uncommon Cause of Encephalitis: Anti-Nmdar Syndrome, A Case Report

Objective: Anti-N-methyl D-aspartate receptor (NMDAR) encephalitis is a paraneoplastic, immune-mediated encephalopathy with a known association with ovarian tumors, more frequently with mature teratoma.
Case Report: We present the case of a 20-year-old patient presenting with fever for 3 weeks and an acute onset of cognitive disturbances. The initial suspicion was that of an infective encephalopathy; however, the lumbar puncture results were negative. Electroencephalography reported epileptiform activity in anterior horns, supporting a diagnosis of encephalopathy. Extensive autoimmune screening was done and found to be positive for anti-NMDAR antibodies. A whole body-TC found a right adnexal tumor compatible with ovarian teratoma. At laparoscopy, the right adnexal tumor was excised, preserving most of the ovarian parenchyma; and histology confirmed a mature teratoma with neural tissue. There were no postoperative complications. The patient recovered normal speech and her former cognitive status, within 40 days from the day after surgery.
Conclusion: The association ovarian teratoma-anti-NMDAR encephalitis is a serious and potentially fatal pathology occurring in young women and under-recognized in many countries and among gynaecologists. Given the recent discovery, special attention should be given to possible behavioural changes and psychiatric symptoms that may occur in young women with apparently unknown cause. It is also very important the diagnostic confirmation through the positivity of the anti-NMDAR antibodies, the diagnosis of the underlying tumour and the early tumour excision; since, the earlier the treatment is, the greater is the rate of success and the clinical remission.

NMDAR encephalitis was first reported by Vitaliani et al. in 2005 [4]. Two years later, Dalmau et al. named the disease as anti- NMDAR encephalitis that appeared to represent a new subcategory of severe and potentially lethal, yet treatment-responsive, paraneoplastic encephalitis, which they described as “paraneoplastic anti-N-methyl-D-aspartate receptor encephalitis associated with ovarian teratoma” [5]. The affected patients were women who developed prominent psychiatric symptoms, seizures, memory deficits and a decreased level of consciousness that often required ventilator support. Three salient features of the syndrome included the young patient age, the association with ovarian teratoma and the detection of antibodies to unknown antigens that were predominantly expressed in the cell membranes of hippocampal neurons (neuropil antigens).

In 2007, Dalmau et al. first reported that 12 women developed prominent psychiatric symptoms with ovarian teratomas (11 patients) and one mature teratoma in the mediastinum [6]. The anti- NMDAR antibody can bind to antigens on the cell membrane of the nerve tissue in an ovarian tumor. The anti-NMDAR antibody is produced by the immune response, which is usually triggered by a preceding infection [7]. These antibodies induce encephalitis via an N-methyl-D-aspartate receptor dysfunction in the cerebral limbic system of patients [7].

The NMDAR is a heteromer consisting of 2 subunits NR1 and NR2, which is mainly distributed in the hippocampus, prefrontal cortex, amygdala, and hypothalamus, and is involved in a higher nervous activity. In the normal state, NMDA-receptors are found throughout the central nervous system, mediating a critical role in synaptic transmission and plasticity. NR1 and NR2 subtypes bind glycine and glutamate; respectively, and together form heteromers with distinct pharmacologic properties, abilities to interact with intracellular messengers and localizations [8]. The anti-NMDAR antibody interacts with the epitope located at the end of NR1 and can induce the internalization of NMDAR, thereby impairing the synaptic function mediated by NMDAR [9]. The impaired synaptic function would reduce the inhibition on postsynaptic glutamate transmitters and further increase the release of glutamate from subcortex and prefrontal cortex, finally resulting in schizophrenic symptoms and movement disorders.

In patients with anti-NMDA-R encephalitis, antibodies directed towards the NR1 and NR2 heteromers of NMDA-receptors circulate within CSF. NR1 and NR2 heteromers predominate within the hippocampus, with less intense reactivity described in the forebrain, basal ganglia, spinal cord and cerebellum [10, 11]. Thus, antibodies may preferentially affect areas responsible for memory, personality, movement and autonomic control, accounting for the unique confluence of personality changes, impairments in cognition, motor derangements, bradyarrhythmias and disturbances in respiratory drive that define the syndrome. Treatment typically includes immunotherapy and surgical removal of the tumor [12].

We report the case of a nulliparous 20-year-old woman, previously fit and healthy without any past medical history and natural from India; who was brought to our hospital on July 17th, 2019, with confusion, agitation, speech disorder, pseudo-epileptic crisis and fever.

She was febrile for 3 weeks without focal neurologic deficits or meningeal signs. Laboratory parameters were normal, no abnormality was identified from tests of C-reactive protein, blood coagulation, or procalcitonin; urine drug test resulted positive for benzodiacepines that were administered in the admission; pregnancy test was negative. The lumbar puncture results were negative with a discrete lymphocytic pleocytosis but a negative multiplex PCR and culture in CSF. Brain computerized tomography (CT) (Figures 1 & 2) and craniocerebral-enhanced magnetic resonance imaging (MRI) were normal; and the electroencephalography reported epileptiform activity in anterior horns supporting a diagnosis of encephalopathy. Chest x-ray and electrocardiogram (ECG) showed any abnormalities. The patient was first hospitalized at Neurology Service with a diagnosis of encephalopathy of unknown origin. 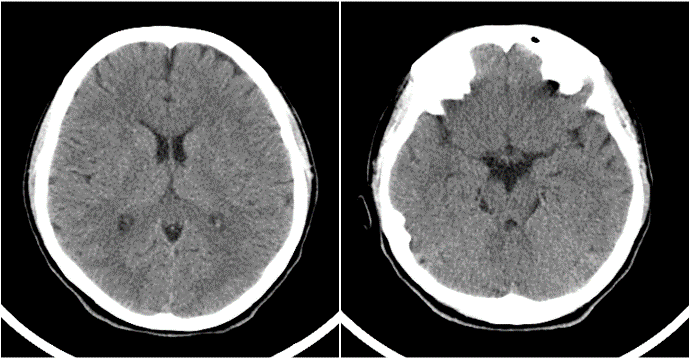 Symptoms progressed, appearing catatonia with epileptic status and low level of consciousness, requiring admission in the UCI and orotracheal intubation. Repeat serum and CSF investigations were unspecific, detecting an autoimmunity pattern with ANA +, hypocomplementemia, and ACL +. Given the diagnosis of encephalitis of unknown origin, a body-CT scan was performed, showing a pelvic tumor (55 x 47 mm) on the right ovary with features suggestive of teratoma. Therefore, a paraneoplastic antibody panel was sent, and anti-NMDA-R antibodies were detected in serum and CSF. And a pelvic MRI was performed (Figures 3, 4, 5, 6) in order to identify, more precisely, the content and structure of the tumor, and to evaluate the remaining ovarian parenchyma. 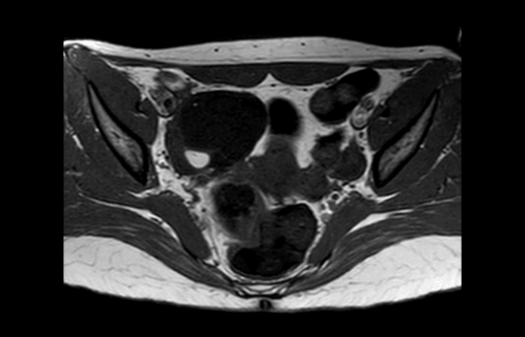 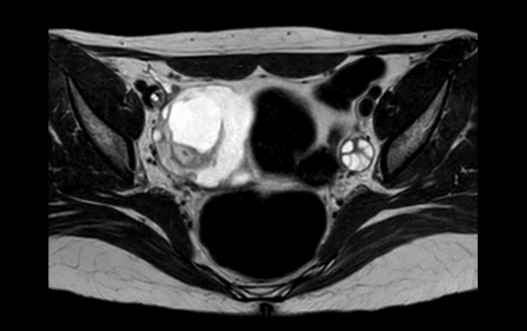 Initially, due to the patient’s acute clinical status, the surgical approach was delayed and a treatment with corticosteroids (methyl prednisone 1g/24h for 5 days) and plasmapheresis (a total of 5 sessions) was performed to alleviate the acute episode; resulting with a very little improvement of symptoms. Subsequently, 21 days after her admission at the Intensive Cares Unit, on August 7th, 2019, was performed a laparoscopic right adnexal tumor excision (Figures 7 & 8) preserving most of the ovarian parenchyma. Histology confirmed a mature cystic teratoma (dermoid cyst) (Figure 9) with neural tissue (Figure 10). There were no postoperative complications and the patient was discharged with anticonvulsant treatment (levetiracetam 100mg/12h) and corticosteroids (prednisone 50mg/24h) for the immediate postoperative period. Forty days after the surgery, the young woman had recovered normal speech, her former cognitive status, and was fully independent in all acts of daily living. 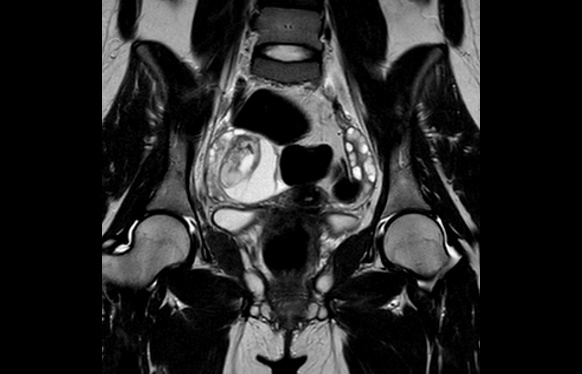 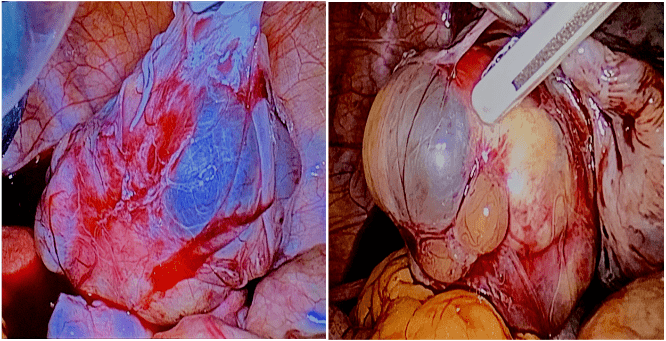 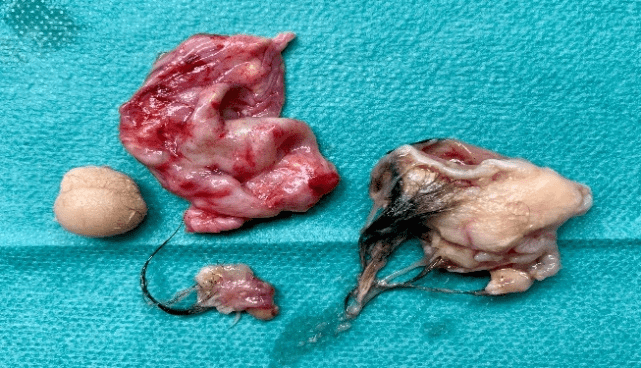 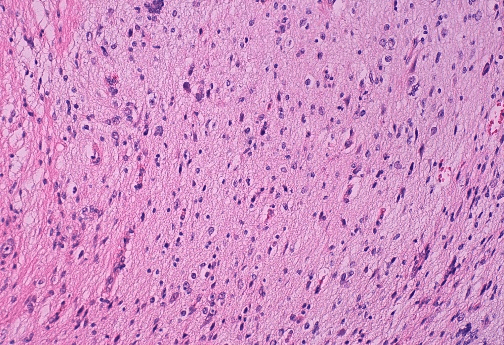 The association ovarian teratoma-anti-NMDAR encephalitis is a serious and potentially fatal pathology occurring in young women and under-recognized in many countries and among gynaecologists. About 70% of patients with encephalitis present with precursory symptoms such as headache, nausea, diarrhoea, fever, or upper respiratory tract infection symptoms. Within the next several days, they develop psychiatric symptoms. Because of these symptoms, wrong diagnoses are often established, such as schizophrenia or bipolar disorders. Given the recent discovery of this association, and the high prevalence of teratomas representing almost the 20% of ovarian tumours, special attention should be given to possible behavioural changes and psychiatric symptoms that may occur in young women with apparently unknown cause. It is also very important the diagnostic confirmation through the positivity of the anti-NMDAR antibodies, the diagnosis of the underlying tumour and the early tumour excision; since early diagnosis increases the chances for successful results and clinical remission.

© 2021 Lourdes Sala Climent. This is an open-access article distributed under the terms of the Creative Commons Attribution License, which permits unrestricted use, distribution, and reproduction in any medium, provided the original author and source are credited. Hosting by Science Repository. All rights reserved.
DOI: 10.31487/j.CROGR.2019.01.01