A special kind of skin cancer surgery, named Mohs micrographic surgery (or Mohs surgery), was invented by a University of Wisconsin Otolaryngologist, Dr. Frederick Mohs [1]. The initial Mohs surgery procedure, also called chemosurgery, employed a zinc chloride-containing chemical paste to destroy cancerous tissue layer by layer under microscopic control [1]. The procedure was subsequently modified to the current and well-accepted form, where patients affected by non-melanoma skin cancers of certain facial locations, recurrent skin cancers, or skin cancers with certain aggressive histologic features would be treated by a layered excisional procedure without the pain associated with zinc chloride paste [2]. The current procedure, with the ability to determine cancer margin in an intraoperative fashion, utilizes microscopic examinations of stained frozen sections obtained from an excised layer of orientation-marked skin where the clinical cancer is visually observed, while the patient waits for the result. Microscopic identification of cancer at the margin of excised skin layer will necessitate the return of the patient to the surgical table for addition layer of excision [3]. The process repeats if needed, until all margins are clear of skin cancer, at which point the Mohs surgeon will close the wound defect, commonly utilizing adjacent tissue transfer technique called flap [4].

Mohs micrographic surgery enjoys great success in curing non-melanoma skin cancers and have achieved nearly 100% cancer clearing, while allowing for maximum preservation of non-cancerous skin [1, 2]. Having appraised the success of Mohs procedure, we will now entertain a novel intraoperative cancer margin determination method that may one day replace part of the traditional Mohs procedure, without the need of time-consuming and labor-intense frozen section preparation and microscopic examination. This new analysis technique is mass spectrometry which has been successfully tested in other cancers for intraoperative margin determination [5, 6].

The ability of mass spectrometer in determining cancer margin is based on that it can identify and quantify the target’s unique molecular fingerprints and that cancer cells have elevated tumor-specific metabolites, proteins, or other molecules. The basic mechanism of mass spectrometer consists of three major steps [5]: • The first step is the generation of analyte ions (ionized samples/molecules)
• The second step involves sorting of analyte ions by their respective mass-to-charge ratio, which represents unique fingerprints for each molecule.
• The third step detects the intensity of sorted analyte ions and reports the identity and quantity of the analyte ions in question.

One exciting utilization of mass spectrometry in cancer margin detection is a hand-held device called “MasSpec Pen” developed by scientists at the University of Texas at Austin [5, 6]. As recently reported, the Austin medical researchers, led by Dr. Livia Eberlin, have built a pen size mass spectrometry device that can determine cancer in a nearly instant speed. Utilizing this “MasSpec Pen”, which links up to a mass spectrometry instrument, surgeons can easily search residual cancer at the surgical margin and adjacent tissues during their cancer surgeries and get results within seconds of time. Significantly for biological processes, these MasSpec pen actions do not cause tissue damage that may become a physical healing problem and an ethical concern [5, 6]. The sequence of intraoperative procedure of this “MasSpec Pen” is depicted in the following steps (Figures 1 and 2) [5, 6]: 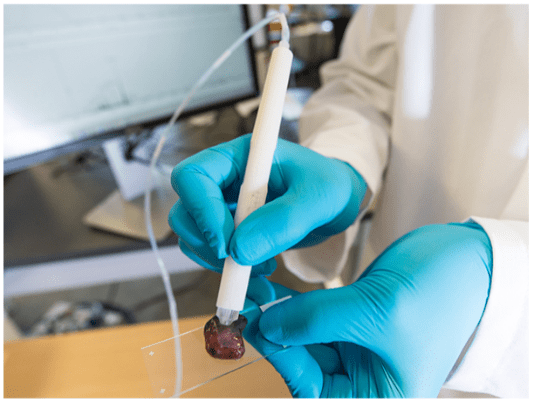 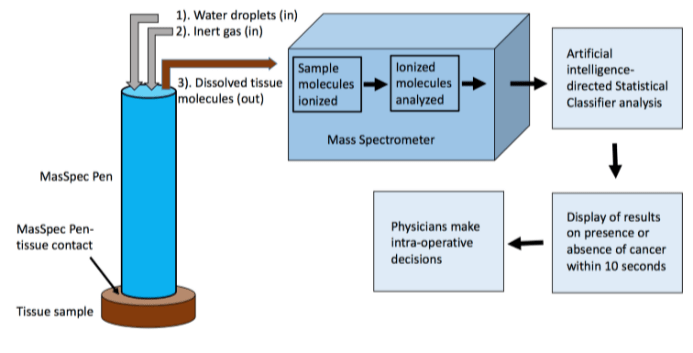 • The operating surgeon holds the “MasSpec Pen” against the excised tissue or in vivo tissue in which the physician wishes to rule out residue cancer (Figure 1).
• Water-soluble molecules, including tumor-specific metabolites, are dissolved by the water droplets suspended at the tip of the “MasSpec Pen”, mixed with inert gas, pumped to mass spectrometer (Figure 2).
• Sample molecules in droplet are ionized and analyzed.
• Sample’s molecular information, the “mass-to-charge ratio”, representing the quantitative relationship between mass and electrical charge that is like a unique fingerprint for each molecule, are determined.
• The identified data analyzed by an artificial intelligence-directed Statistical Classifier, trained and validated with hundred histopathology-certified cancer and normal tissue samples, will automatically determine and report if the examined tissue is cancerous or normal, within seconds, nearly real-time in speed (with greater than 95% accuracy).
• Surgical team can then make intraoperative decision depending on the finding by the “MasSpec pen”.

This group of investigators published their first findings utilizing this “MasSpec Pen” in their 2017 paper with the following results [6]. On the ex vivo examinations of 20 thin slides and 253 human tissue samples of both normal and cancerous breast, lung, ovary, and thyroid gland, they obtained a significant amount data on tumor-specific and tumor-enhanced molecular information (metabolite, lipid, protein) useful for tumor margin identification. Along with Statistical Classifier built with histopathology-certified database, this “MasSpec Pen” method could predict cancers in real tissue with 96.4% sensitivity and 96.2% specificity, and an overall accuracy of 96.3%. In addition, applying this “MasSpec Pen” on tumor-barring animals in vivo showed no observable physical injury or distress to the animals, further support a non-destructive intraoperative function of this device [6].

Three major hurdles would need to be overcome, before mass spectrometry could become a practical method for determination of skin cancer margin. First, an investigation needs to be performed to identify the skin cancer-specific metabolite or molecule that can be used to distinguish skin cancer from normal skin tissue. Second, the cost is high. At the present time, the price tag of a mass spectrometer is about $500,000. Third is the size issue. The typical mass spectrometer available commercially is simply too big to fit into a Mohs surgery room [6]. As technology advances, these three obstacles will hopefully be removed in a not-too-distant future [7].

If this mass spectrometry technique eventually replaces part of the Mohs procedure in determining intraoperative cancer margin, does it mean that the Mohs surgery training will become a useless exercise? Not at all. The essential parts of Mohs surgery fellowship training are layer removal of cancer and wound closure and the second part is in fact the technically most challenging. Mastering wound closure of the training will be critical for serving patients, whether the cancer margin is determined by the traditional Mohs procedure ‘slide by slide’ or by the novel mass spectrometry technique ‘pen by pen’. If and when the traditional Mohs procedure is replaced by a mass spectrometer, the new technique could simply be renamed as “MasSpec Mohs”.

© 2021 Lawrence Siu-Yung Chan. This is an open-access article distributed under the terms of the Creative Commons Attribution License, which permits unrestricted use, distribution, and reproduction in any medium, provided the original author and source are credited. Hosting by Science Repository.
DOI: 10.31487/j.ACO.2018.01.06