Background: With the increasing trend of IONM in neurosurgery the role of total intravenous anaesthesia has gained upper hand in the practice of neuro anaesthesia. Propofol based TIVA techniques facilitates rapid recovery of consciousness and psychomotor function with lower incidence of post-operative nausea and vomiting. It also facilitates satisfactory IONM monitoring while maintaining the adequate depth of anaesthesia. Available literature focuses on the surgical aspects with IONM. Few studies are available, which compare TIVA with general anaesthesia that too without IONM. Earlier TIVA for IONM has been studied in patients undergoing kyphoscoliosis correction surgery. This study was conducted to evaluate the efficacy of TIVA in facilitating IONM in resection of intracranial masses and to study its effects on hemodynamics and post op recovery.
Methods: In our retrospective study of 23 cases, patients undergoing intracranial tumor mass excision surgeries requiring IONM were given standardized general anaesthesia using intubating dose of short acting muscle relaxant and further maintenance of anaesthesia was done using infusion of propofol and dexmeditomidine with the minimal inhalational agents. IONM was recorded successfully.
Results: 18 patients were haemodyanamically stable. 3 patients had intermittent episodes of bradycardia, and 2 patients had hypotension. Three patients elicited dampened response requiring reduction in anaesthetic dose. Six patients exhibited delayed recovery.
Conclusion: TIVA with propofol and dexmeditomidine is a good anaesthetic modality to facilitate IONM in resection of intracranial masses.

Total intravenous anaesthesia (TIVA) refers to the intravenous administration of anaesthetic agents to induce a temporary loss of sensation and awareness. TIVA is commonly used in general anaesthesia technique in cases where intraoperative neuromonitoring is mandatory [1]. This technique enhances recovery after long neuro surgical procedures. A tailored anaesthesia is the major goal in the modern practice of TIVA using target-controlled infusion (TCI).

TIVA can be conducted either with a single drug or with combination of drugs. The most commonly utilized group of drugs include hypnotics and short acting opioids. Propofol based TIVA techniques offer many advantages including rapid recovery of consciousness and psychomotor function with a lower incidence of post-operative nausea and vomiting [2]. This study primarily highlights the efficacy of TIVA using dexmeditomidine and propofol in eliciting satisfactory MEPs response during resection of intracranial masses and secondarily we assessed the adverse effects of these drugs when used for long duration surgeries.

We conducted this retrospective observational study after the institutional ethical committee permission in complete accordance with the guidelines of Helsinki. All patients who underwent surgery for excision of intracranial mass under neuro monitoring guidance from January 2021 to March 2022 were included in the study. Twenty-three patients could fulfill the criteria of neuro monitoring and were considered to be included in the study. After discussion with neurosurgeon and the concerned neuro physicist a plan of TIVA was finalized. Routine OT preparation was taken. Noninvasive monitors (pulse oximeter, ECG, noninvasive blood pressure) were attached prior to induction of anaesthesia while invasive (internal jugular vein and Arterial line) monitoring access were secured after induction of general anaesthesia. Body temperature was maintained using fluid warmer and body warming blankets (to prevent hypothermia during long duration surgeries).

A constant voltage stimulator was used for transcranial electrical stimulation performed through a pair of spiral scalp electrodes using 3-5 pulses of 200-400 V with an interstimulus interval of 1-3 milliseconds. Each pulse was 50 microseconds in duration. Muscle responses were recorded by subdermal needle electrodes placed in desired areas supplied by cranial nerves. Recordings were considered stable when spontaneous fluctuation in amplitude was less than 50% and 10% in latency. Any decreases in amplitude and increase in latency exceeding these limits were considered significant and noted. All significant MEP changes, including recovery after impairment or loss were reported to surgeon. Any significant variations in hemodynamics such as bradycardia (HR<50bpm) or tachycardia (HR>100), hypertension (MBP<50 mm hg) or hypotension (MBP>90mmhg) were noted. Doses of infusion s were modified in case of inappropriate results. BIS was maintained around 40-50. Post operatively all the patients were paralyzed using Inj. Vecuronium and shifted to surgical ICU for postoperative ventilation. The trial of extubation was given after 24 hours and were extubated according to the response. Muscle relaxant and dexmeditomidine infusion were discontinued 120 minutes prior to weaning trial. Patients were followed up until 1 week postoperatively.

i. All 23 patients were analysed in terms of demographic data, hemodynamic variability intraoperatively, response to MEPs and recovery after surgery.
ii. Demographic data as presented in (Table 1).
iii. Hemodynamically, 78.26% (18) patients were stable throughout the surgery while 13.04% (3) patients had intermittent episodes of bradycardia with heart rate going below 50 / min which was managed with injection atropine 0.6mg intravenously while 8.69% (2) patients had hypotension (mean blood pressure < 60 mm hg) which was managed with injection phenylephrine 0.5 to 1 mcg/kg (Figure 1).
iv. Twenty-two of 23 (95.65%) patients required blood transfusion, as the actual intra operative blood loss exceeded the mean allowable blood loss (MABL) which was assessed preoperatively for every patient.
v. Twenty (86.95%) patients demonstrated adequate response to MEPs stimulation. While 3 (13.04%) patients had dampened response requiring periodic reduction in dose of anaesthetic agents (Figure 2).
vi. Seventeen (73.29%) patients were extubated 24hours after surgery, while 4 (17.39%) patients needed postoperative ventilation for 48 hours to 72 hours due to delayed recovery. Two (8.69%) patients could not be extubated due to inadequate response to weaning trial and required tracheostomy after 1 week of postoperative ventilation (Figure 3).
vii. The sedation scores as assessed by Ramsay sedation score after extubation were of score 2 in 16 of 21 patients while the score was 1 in 5patients out of 21. 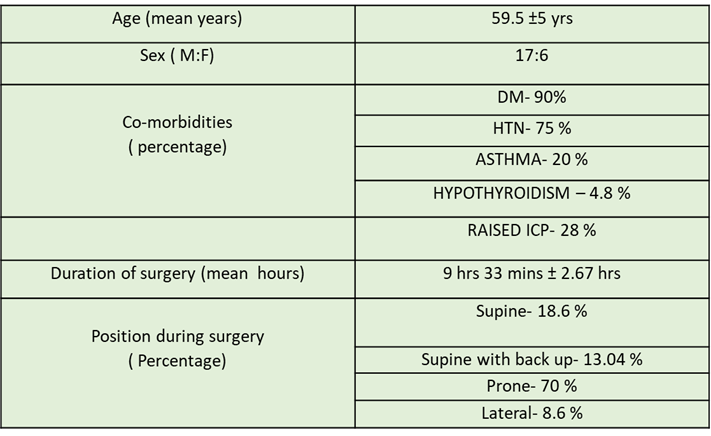 TIVA is gaining new horizons in anaesthesia practice even for major surgeries like resection of intracranial space occupying lesions. With the increased practice of intraoperative neuromuscular monitoring (INM) for intracranial masses, TIVA is often the preferred anaesthesia technique. The use of INM allows the safe surgical procedures with reduced incidence of nerve injuries intraoperatively. In the technique of TIVA, the use of muscle relaxant is completely avoided except for the initial dose to facilitate intubation [3]. Avoidance of use of muscle relaxant allows adequate neuromuscular monitoring after the desired nerves are stimulated [4, 5]. Once the response of desired latency and amplitude is elicited, the surgery can further be allowed to proceed.

In our observational study we could conclude that the TIVA using Propofol based technique along with dexmeditomidine was safe to administer for long duration surgeries involving resection of intracranial masses, was effective in maintaining intraoperative haemodyanamics and also at the same time did not interfere with the recordings of INM. To the best of our knowledge this study is the largest pool of cases done under TIVA with successful IONM Though isolated case reports have been published. Sabbagh, Abdul Rahman J et al. in 2009 reported a case of brain stem tumor under TIVA with IONM. In the case they used infusion of propofol and fentanyl with titrated MAC of sevoflurane to facilitate IONM and recorded satisfactory results [6].

There have been studies conducted comparing TIVA with general anaesthesia to study its effect on survival of glioblastoma patients. Thomas Schmoch in their study found no significant difference in the survival of patients among the techniques where IONM was done, and TIVA was used as the anaesthetic technique and cases where no IONM was done and GA was used as the anaesthesia technique [7]. In this study the authors focused on the post-operative outcome and survival while on the contrary our study focusses on the efficacy and reliability of anaesthesia technique in facilitating IONM in order to minimize iatrogenic neurological damage.

INM has earlier been practiced with TIVA in kyphoscoliosis correction surgeries. Panse et al. conducted this study earlier in cases of kyphoscoliosis in TIVA comparing propofol fentanyl with propofol dexmeditomidine and found that for better hemodynamic stability, Dexmetedomidine is more preferable anaesthetic agent than fentanyl to get optimum SSEP response [8]. In our study also fentanyl had to be used in 2 cases in a view of preexisting bradycardia, but due to dampening of response as indicated by neurophysicist, the fentanyl infusion had to be discontinued to get adequate MEP response.

Magni G et al. proposed that no patient was benefited using TIVA with ultrashort acting opioids like ramifentanyl with propofol over the conventional balanced general anaesthesia using volatile agents like sevoflurane with propofol in terms of recovery and Cognitive function [1]. While contrary to this our study reflects a better recovery and successful IONM monitoring with TIVA.

Hao You and Hui Qiao et al. conducted neuromonitoring techniques in resection of gliomas involving eloquent areas and found that dexmedetomedine proved to be more desirable for awake craniotomies due to its shorter arousal time and low probability of respiratory depression [9]. We also used Dexmeditomidine infusion to maintain adequate depth of anaesthesia and the discontinuation of dexmeditomidine infusion facilitated early awakening. Earlier various anaesthetic techniques were used for craniotomies which included sleep awake sleep technique and monitored anaesthesia care [10]. Lately AAA technique is more commonly used to maintained maximum wakefulness and to get desirable benefits of IONM [11].

In 2018 Gliomas professional committee of Chinese medical doctors association commonly recommended cortical and sub cortical stimulation and real time monitoring during glioma surgery to ensure operational safety and efficacy [12]. Szelenyl A et al. used electromyograph for brain mapping but patient being awake, it interfered with MEP and EMG response due to voluntary movements and this technique was not feasible and didn’t support IONM [13]. Dexmetedomidine a selective alpha 2 adrenergic receptor agonist has been proven to be more desirable during IONM due to its short duration of action and easy arousability. (Prontera A Baroni S & Shen SL, Zheng JY) With this background in all our patients Dexmeditomidine was used as infusion at a rate of 0.5-0.7 mcg/min this dose is also shown to aid in IONM without any interference [14].

Iddo paldor et al. in their retrospective observational study conducted that IONM has an impact during surgical resection of intracranial masses and may affect the surgical technique [15]. In this study out of 40 cases in 1 case the surgery was stopped due to inadequate IONM response. In 5 cases the resection was incomplete due to inadequate response of IONM, 14 cases there had to be a change in resection process and in 4 cases the anaesthesia technique had to be modified to get an adequate IONM response. Thus, favouring the need of optimum anaesthesia to record the adequate response from IONM. In our study also the dose of inhalational agent had to be adjusted to get an adequate response in 3 cases.

The evolving technique of TIVA with the use of short acting agents like dexmeditomidine and propofol is very favourable in resection of neuro surgical masses requiring IONM as these agents do not interfere with the latency and amplitudes of MEPs and at the same time maintain adequate depth of anaesthesia while reducing the incidence of post-operative neuro deficit. Long duration surgeries can also be performed smoothly using this technique.

© 2023 Neha A. Panse. This is an open-access article distributed under the terms of the Creative Commons Attribution License, which permits unrestricted use, distribution, and reproduction in any medium, provided the original author and source are credited. Hosting by Science Repository.
DOI: 10.31487/j.ACR.2022.03.02