Malignant Rhabdoid Tumor of the Adrenal Gland: Case Report and Review of the Literature

Malignant rhabdoid tumor (MRT) is an aggressive, infiltrative and highly metastasizing neoplasm which has been described predominantly and usually rises from the kidneys in the pediatric age group. This tumor has a poor prognosis and constitutes 1.8% of all renal malignancies [1]. MRT was first described as an aggressive subtype of wilm’s tumor in 1978 [2]. However, the lack of ultra-structural resemblance has caused Haas et al. to coin the term malignant “rhabdoid tumor of the kidney” and categorize it as a separate entity. The ultrastructure of MRT cells revealed polygonal cells with an eosinophilic cytoplasm that contains globular or filamentous hyaline inclusions, which were reported as a hallmark of the disease [3].

A 21-year-old female patient presented with right loin pain for three months duration prior to presentation. Computed tomography (CT) scan of her chest, abdomen, and pelvis showed a 10x 8x6 cm right adrenal cortical mass with malignant criteria, with retroperitoneal and retrocrural lymphadenopathy and multiple pulmonary metastases. A biopsy was then taken, which was interpreted as an adrenocortical carcinoma. Moreover, she underwent a bone scan which we later reviewed at our center that showed no suspicion of bone metastases

She underwent treatment at outside the country with 10 sessions of radiotherapy directed towards her upper abdominal area. She also received with three cycles of chemotherapy that consisted of Cisplatin and Gemzar. When she first presented to our center, she was asymptomatic. Upon examination, her chest was clear and no masses where palpated in her abdomen. A CT scan of her chest, abdomen, and pelvis showed a right adrenal mass measuring 3.6 x 2.4 x 3.4 cm and bilateral pulmonary nodules measuring less than 0.5 cm, each (Figure 1). The CT scan also revealed complete resolution of retroperitoneal and retrocrural lymphadenopathy. A biopsy was then taken which suggested an adrenocortical carcinoma. However, we did not get an accurate assessment of the disease because of the small volume of her lung disease, hence; we decided to proceed with a right adrenalectomy. After the surgery, the patient recovered without any significant morbidity. 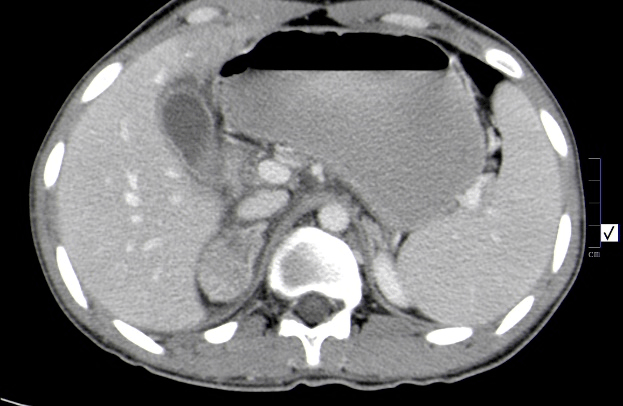 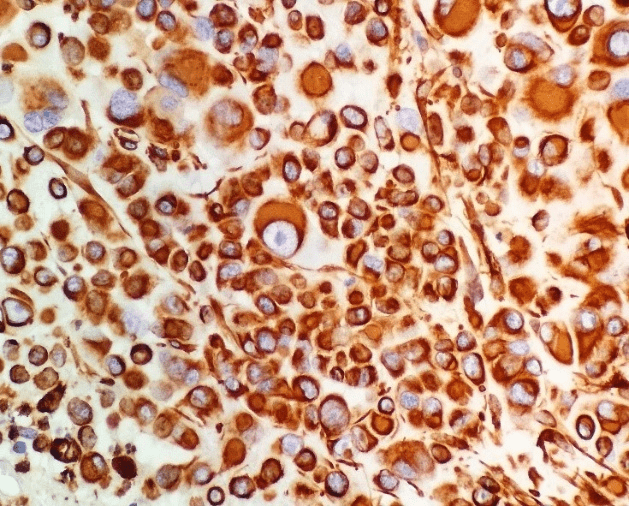 The excised tumor was pathologically reviewed. Sections of the tumor showed large polygonal cells with vesicular nuclei, a prominent nucleus, and an abundant eosinophilic cytoplasm (Figure2). Most of the tumor cells showed eccentric (rhabdoid) nuclei. Moreover, multiple foci of geographical necrosis and plentiful mitosis were present. BAF47 (INI1) immune-stain was lost in the tumor cell nuclei.Vimentin and PanCK stains were positive. Synaptophysin was occasionally positive. Inhibin and MelanA were both negative (Figure3). Depending on the above histomorphological features and the immunoprofile, the diagnosis was finalized as a case of extra renal MRT of the adrenal gland. The patient was kept on follow-up without any additional systemic therapy. History, physical examination, blood work and CT scans of the chest, abdomen, and pelvis will be conducted every four months; since the possibility that the tumor has metastasized cannot be excluded. 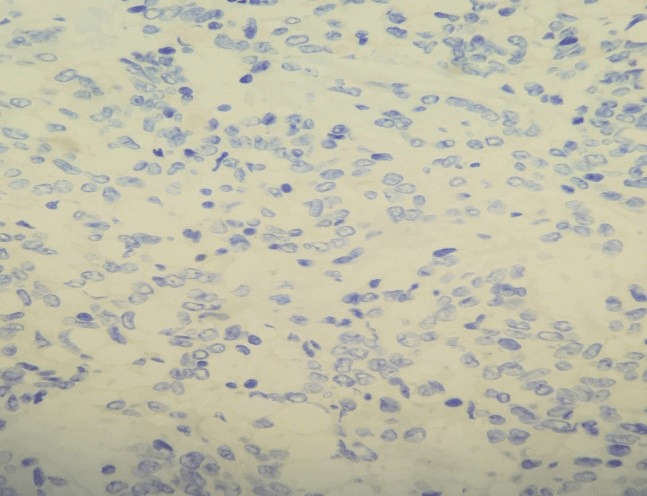 Review of the literature

MRTs are highly aggressive tumors that usually arise in the kidneys of children; they show a poor 18-month survival rate of 20% [5]. Extrarenal MRTs are extremely rare. They were described in a number of soft tissues including the liver, brain, tongue, neck, chest, heart, pelvis, extremities, and several other sites [5]. However, to the best of our knowledge, only two other cases were published reporting the involvement of the adrenal glands [1, 5]. The first case discussed a 3-year-old boy with a primary left adrenal mass measuring about 10x10 cm in diameter underwent partial adrenalectomy and followed by multi-agent chemotherapy. The patient died shortly after the first course of chemotherapy [1].

The second reported case described a 63-year-old male patient, who presented with a right abdominal mass. The patient underwent a laparoscopic mass excision. The tumor measured 13x 12x8 cm on gross specimen confined to the adrenal gland. The patient had a smooth postoperative course, with no signs of recurrence for 2 years [5]. The diagnosis of renal and extrarenal MRTs largely depends on histopathology, nevertheless, due to the high variation in its site of presentation and its highly aggressive behavior, it must also be kept as part of the differential diagnosis in the minds of radiologists [5]. Treatment regimens of MRTs are still being tested, where some of the treatment options include surgical removal of the tumor, chemotherapy, radiotherapy, or a multimodality approach of different regimens being used together. Our patient showed no signs of morbidity after the operation and presented with no tumor recurrence or distant metastasis on imaging studies for over 1 year after the operation.

All authors have read and approved the final draft. They declare that they have no competing interests and this work is not funded by any resource and this work has not already been published and has not been submitted simultaneously to any other journal.

© 2021 Ali Al-Daghmin. This is an open-access article distributed under the terms of the Creative Commons Attribution License, which permits unrestricted use, distribution, and reproduction in any medium, provided the original author and source are credited. Hosting by Science Repository.
DOI: 10.31487/j.ACO.2019.02.02