Objective: Iliopsoas abscess is a rare complication of fistulizing Crohn’s disease, which is difficult to diagnose and manage. We report this case to alert clinicians to the diagnosis and management of this unusual association.
Case presentation: A 31-year-old male who presented with right groin pain, and hip pain due to an iliopsoas abscess. He was found to have iliopsoas fistula and underlying Crohn’s disease. The right iliopsoas abscess was managed with CT guided percutaneous drainage and pigtail catheter placement and intravenous antibiotics. The patient was started on mesalamine and prednisone. A month later, the patient became symptomatic again and a duodenocolic fistula was found. A laparoscopic extended right hemicolectomy with both fistulas takes-down, end ileostomy and mucus fistula were performed. Pathology revealed chronic active Crohn’s ileocolitis. His ileostomy was reversed three months later. The patient recovered uneventfully and was doing well after six-month follow-up.
Conclusions: Iliopsoas abscess can be a rare presentation of Crohn’s disease. Evaluation with CT imaging, and initial management with drainage and antibiotics are recommended. Surgical intervention should be considered early for impending arthritis.

Crohn’s Disease (CD) is characterized by chronic inflammation of gastrointestinal tract (GIT). It can involve any part of the GIT from mouth to anus, but in the majority of cases it mainly affects the terminal ileum and/or the colon. A usual presentation is abdominal pain, diarrhea, with or without bleeding, weight loss and/or perianal disease. It is very rare for a patient presented with iliopsoas abscess (IPA) as a first presentation of underlying CD. In some cases, the identification of a fistula and its correlation with the clinical symptoms may be very difficult. There are only a few reports in the literature of psoas abscess and fistulae in patients with CD. We reported a 31 years old male patient with right iliopsoas abscess as the first symptoms of undiagnosed CD.

To prevent the development of septic arthritis of the hip joint, a laparoscopic extended right hemicolectomy with iliopsoas fistula and colo-duodenal fistula takedown was performed. An inflammatory mass fixed to the retroperitoneum was taken down associated with the involved bowel, and an abscess opening into the right psoas muscle was recognized and debrided after the ileocecal resection. A duodenocolic fistula fistulizing to the anterior second portion of duodenum was revealed after distal transection of transverse colon. A horizontal wedge duodenectomy was performed using Echelon 60 blue load after confirming adequate remaining lumen of duodenum. An end ileostomy and transverse colon mucus fistula were created. 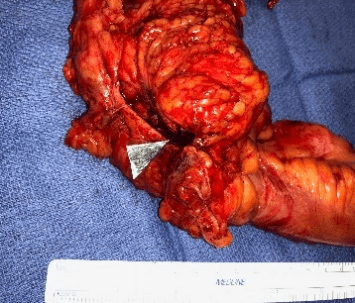 The pathology of resected specimen showed chronic active Crohn’s ileocolitis with ulceration, pseudopylop, fistula tracts and abscess formation, and negative for dysplasia. Patient recovered uneventfully and was discharged home on POD5. His transverse mucus fistula and end ileostomy were reversed three months later laparoscopically. He had recovered well when evaluated on his six-month follow-up.

Iliopsoas abscess (IPA) is a rare pathology in adults, particularly as complication of the Crohn’s disease (CD). Since Van Patter et al [1] reported the first case of psoas abscess complicating CD in 1954, less than 100 cases have been documented in Western Countries. The primary IPA is caused by hematogenous or lymphatic spread of infection from remote locations. Whereas, secondary IPA develops due to direct spread of infection of psoas muscle from adjacent structures including vertebral bodies and discs, the hip joint, gastrointestinal tract, the genitourinary tract and vascular structures. Inflammatory bowel disease (IBD), especially CD, is the most common cause of secondary IPA, which was also found in cases of infected aortic aneurysm, appendicitis, colorectal cancer and following abdominal surgery [2-6]. The primary IPA predominates in undeveloped countries and in children, while the secondary IPA predominates in developed countries and in adults [7].

The diagnosis of IPA is made by evaluation of the history, careful physical examination, laboratory assessment and imaging studies. Classical triads of iliopsoas abscess include back pain, limp and fever, was described by Mynter in 1881 as a classic manifestation acute psoasitis. However, this may not always be present. Presence of psoas sign on examination may be a clinical clue of iliopsoas abscess. Leukocytosis, elevated erythrocyte segmentation rate and elevated C-reactive protein are significant laboratory features seen in majority of patients [5, 8]. CT is the imaging of choice to evaluate a suspected iliopsoas abscess. Other positive findings include a focal hypodensity, infiltration of surrounding fat, and gas or an air fluid level within the muscle when it fails to reveal an obvious abscess on CT scan [9].

Treatment of an iliopsoas abscess and fistula in CD consists of drainage of abscess (percutaneous or surgical drainage if failed percutaneously), medical management of CD, optimizing nutrition status and surgical resection of fistula and diseased bowel when not responding to medical therapy. A combination therapy with anti-TNF agent and an immunomodulatory agent is recommended for patients with fistulizing Crohn’s disease. In general, aggressive surgery should be avoided. Fistulizing disease not responding to medical therapy is an indication for surgery. Surgery for enteroenteric fistula can be taken as a radical approach with extensive resection of both segments involved in the fistula or a more conservative approach with resection of one segment and sparing of the victim segment provided that the latter is free of Crohn’s disease [10]. Surgical treatment aside, optimization of nutrition in patients with CD should not be overlooked. Poor perioperative nutritional status predisposes to increased risk of postoperative complication. Enteral nutrition (EN) (such as oral supplements, tube feedings are recommended in patients who have undernutrition and fail to meet nutritional requirements by standard diet alone. TPN in inflammatory bowel disease can prevent antigenic stimuli for intestinal mucosa, allow bowel rest as well as supply adequate calories and essential nutrients [11]. As found in the meta-analysis by Brennan et al, postoperative complication was seen in 25% of Crohn’s disease patients who did not receive preoperative TPN whereas it occurred only in 15 % of CD patients who received TPN [12].

Although still an uncommon association, iliopsoas abscess has been reported as a complication of Crohn’s disease. In our case, IPA was the first manifestation of underlying CD. A long duration of chronic inflammatory and fistulizing disease without treatment attributes to iliopsoas abscess formation, as in our case that the patient had intermittent diarrhea for many years. Following CT guided drainage of abscess and antibiotics, patient still had a worsening condition in follow up; this can be considered as another clue to presence of an underlying condition. Presence of fistula, as mentioned above, in repeat imaging, was a strong evidence in favor of Crohn’s disease. The patient’s symptoms resolved only after right hemicolectomy with fistula takedown. Thus, treatment of underlying condition should be also be addressed rather than only an isolated treatment of iliopsoas abscess. In CD with IPA, involved bowel segment should be resected followed by primary anastomosis. Time interval of surgical treatment varies in the literature. Surgery is recommended after resolution of the abscess and optimizing of nutrition status.

Iliopsoas abscess can be a complication of Crohn’s disease, appendicitis, diverticulitis or metastatic colon cancer. CT abdomen/pelvis with Oral and IV contrast is the most efficient and accurate imaging study in diagnosing and identify fistulization. Drainage of the abscess and use appropriate antibiotics is now accepted as a preoperative temporizing procedure to improve patient nutritional status, control sepsis or active inflammation and raise the odds of safe healing after a single operation of resection of the fistula and diseased colon. Time interval of surgical treatment varies in the literature. Persist symptoms and impending septic arthritis prompt early surgical intervention.

© 2023 Cristiano Alpendre. This is an open-access article distributed under the terms of the Creative Commons Attribution License, which permits unrestricted use, distribution, and reproduction in any medium, provided the original author and source are credited. Hosting by Science Repository.
DOI: 10.31487/j.AJSCR.2019.01.04