Introduction: Standard treatment of locally advanced rectal cancer (LARC) includes neoadjuvant chemo-radiotherapy followed by total mesorectal excision (TME). The role of KRAS as a biomarker in rectal cancer remains equivocal. We evaluate the Tumor Regression Grade (TRG), Relapse-Free Survival (RFS) and Overall Survival (OS) according to the KRAS oncogene status in LARC.
Material and Method: We evaluated the KRAS status in 23 patients with LARC. Tumor DNA was obtained from pretreatment biopsy tissues.
Results: KRAS mutation was found in 30,4% of the patients. TRG (1-2) after CRT were 56,2% and 42,8%, for wild-type and mutant KRAS groups (p= NS). After a median follow-up of 31 months, there was no difference in RFS (47,7 vs 23,3 months) or OS (51,5 vs 30 months) between wild-type and mutant-type KRAS groups, respectively.
Conclusions: Although KRAS status seems to have slightly better prognosis in LARC, it does not reach significant results (probably due to insufficient sample) in TRG, RFS or OS.

In this setting, the identification of predictive biomarkers of poor response to neoadjuvant CRT could be used to select the optimal treatment for rectal cancer patients avoiding significant morbidity in patients who will not benefit from these treatment [8]. Several molecular markers like epidermal growth factor receptor (EGFR), vascular endothelial growth factor (VEGF) or tumor protein 53 and some of them have been already applied to the treatment regimen [9]. Between these biomarkers, the mutation of Kirsten RAS (KRAS) oncogene is one of the most commonly studied mutations in colorectal cancer, yet its role in rectal cancer remains controversial [8]. Activation of the KRAS proto-oncogene is an essential step in carcinogenesis and it appears in 30-40% in colorectal cancer [10]. KRAS is a molecular transducer and important component of the EGFR pathway and is now widely accept as a predictor of poor response to anti-EGFR monoclonal antibodies such a cetuximab and panitumumab in metastatic colorectal cancer and testing for KRAS mutation has been incorporated into treatment [11, 12].

Twenty-third LARC patients treated at our Hospital between January 2013 and August 2018 who received preoperative CRT followed by TME, were retrospectively analyzed. Eligibility patients had 1. histological confirmed rectal adenocarcinoma, 2. clinical stage of cT3-4N0-2M0, and 3. radical resection of the rectal tumor. Exclusion criteria were: patients with a history of malignancy other than rectal cancer, anti-EGFR therapy with preoperative radiation, or distant metastasis at the time of diagnosis.

All patients received the prescribed CRT as planned. Of the 23 included patients, 18 were men (78%) and 5 were women, with a median of age of 63 (range:49-75) years. The clinicopathological characteristics of the patients are summearized in (Table 1).


Table 2: Comparison of Tumor Response with regard to KRAS Mutation Status


I Tumor regression and oncogene mutation

KRAS mutation status was found in 7 of 23 patients (30,4%). After CRT, 6(26%) of the 23 patients were downstaged. Tumor response with regard to KRAS oncogene status is shown in (Table 2). In total, 9 of the 16 patients (56,2%) with wild-type KRAS achieved significant tumor regression (TRG1-TRG2) after preoperative CRT, whereas only 3 of the 7 patients (42.8%) with mutant-KRAS had a detectable response. There were no statistically significant difference in tumor regression rates between the 2 groups (p=0.55). In the multivariate analysis, age gender, downstaging, KRAS status and CEA level significantly did not affect the tumor response after preoperative CRT. 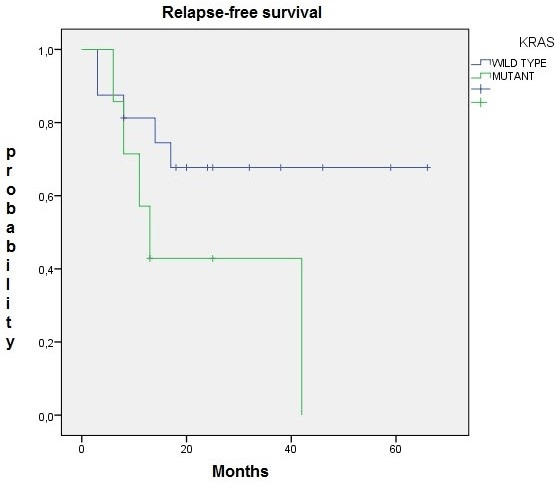 Figure 1: There was no statistically significant difference in Relapse-free survival between the wild-type group and the mutant-type group (p=0,08) 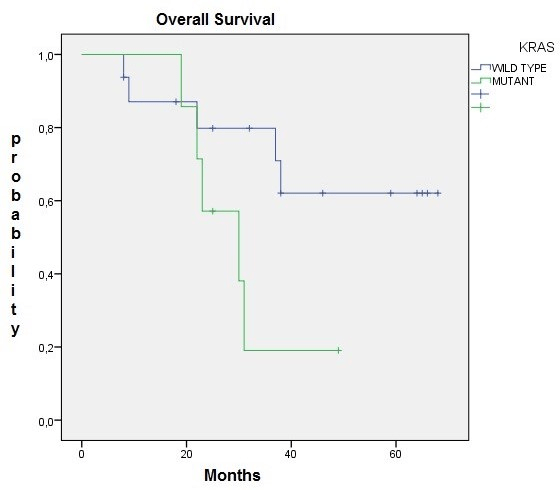 Figure 2: There was no statistically significant difference in Overall Survival between the wild-type group and the mutant-type group (p=0,07)

The KRAS oncogene mutation is involved in the transition of adenoma to carcinoma in colorectal cancer, being found in about 30-35% [15]. Several trials examining tumors with KRAS mutation and anti-EGFR therapy have revealed the poor prognostic effect of KRAS mutations in metastatics colorectal cancer patients [16]. As pointed earlier, 5-FU or capecitabine- based chemotherapy concurrent radiotherapy is the recommended regimen before TME. There are currently no effective predictors of response to preoperative CRT in LARC. Clinical trials over the KRAS oncogene status and treatment outcomes in LARC are limited. Thus, we focused on the potential of KRAS oncogene status as a biological predictive marker for rectal cancer in LARC.

There are some clinical studies showing the good responders after preoperative CRT have better outcomes than poor responders in the control of local and distant failure. For this reason, tumor response can be an important prognostic factor in rectal cancer. In our analysis the downstaging rate was 26%, similar to others studies whereby downstaging rate of 30-40% [17]. Lee JW et al. found that downstaging was not associated with KRAS mutation status. In the current study, KRAS mutation was not found to be predictive of tumor response to neoadjuvant CRT in LARC [19]. Some studies have been reported that rectal cancer with KRAS mutation is likely to have poor response to neoadjuvant CRT compared with wild-type tumors [12, 18]. Nevertheless, in the meta-analysis by Clancy et al, there were no statistically differences in tumor response between the wild-type and mutant-type KRAS groups, irrespective of the chemotherapy regimen [13].

Several studies analyzed the association of RFS and OS between KRAS mutation groups (wild-type vs mutant). Luna –Perez et al. found KRAS mutations in rectal cancer to be associated with longer RFS and OS [20]. While these data were retrieved from tissue taken after preoperative CRT, we analized biopsies taken prior to neoadjuvant treatment. Lee JW et al. found that KRAS mutation status was not associated with postoperative prognosis in rectal cancer as well as this study that no difference is observed in RFS and OS between both groups [19]. Curiosly, in our study we found near significant differences in outcomes and responses regarding the KRAS status.

There are some limitations in my study. First, these cohorts of patients are those who due to their bad prognosis factors, requested KRAS mutation status in pre-treatment biopsy. They are not all LARC patients treated in our center. Thus, its prior poor prognosis might affect the final results. Secondly, this study should be understood in view of inherent biases of a retrospective study design, and we have evaluated small number of patient cohort. Thirdly, the follow-up period is far too short to draw definitive conclusions. In summary, we found that the KRAS mutation status does not influence the tumor response and survival in patients treated with neoadjuvant CRT followed by curative surgery. It would be interesting to carry out prospective trials with longer follow-up examining KRAS mutation in locally advanced rectal cancer for an increased understanding.

© 2021 Fernando Arias. This is an open-access article distributed under the terms of the Creative Commons Attribution License, which permits unrestricted use, distribution, and reproduction in any medium, provided the original author and source are credited. Hosting by Science Repository.
DOI: 10.31487/j.ACO.2019.03.03


Table 2: Comparison of Tumor Response with regard to KRAS Mutation Status

Figure 1: There was no statistically significant difference in Relapse-free survival between the wild-type group and the mutant-type group (p=0,08)

Figure 2: There was no statistically significant difference in Overall Survival between the wild-type group and the mutant-type group (p=0,07)