Infrared laser as a heat source could induce gene expression by activating heat promoter genes in Caenorhabditis elegans, as previously reported. In this study, we innovatively used a 266-nm laser to irradiate C. elegans for only one second and observed a significant inhibition of the overall number of eggs laid (P < 0.0001) and the first day egg laying (P=0.005). This is the first study to establish how light with a wavelength of 266-nm can influence a life activity such as laying eggs in C. elegans.

In our previous study in which we reported that light can alter protein expression in skin derivative stem cells (SDSC), we irradiated SDSCs using a 266-nm laser [1]. We observed that cellular proteins such as CD90 were down-regulated 14.6%-28.8% depending on the intensities of light used for irradiation. DNA is embedded in the cells and billions of nucleotides are programmed to direct cellular performance or life activities through the formation of mRNA and proteins. In general, DNA transcribes messages to RNA, which translates them into proteins, which in turn are responsible for functionality and life activities. Based on this central dogma, we aimed to find a system whose life activity would be impacted after such light treatment as seen in our previous experiments. Thus, the result will expand our findings from the previous experiment that light can regulate a cellular protein and impact a life activity.

In earlier experiments, we used green beans and irradiation was performed before budding, but the results were difficult to evaluate, and the experiments failed. Another experiment was performed using zebrafish, but its thick skin and large surface area influenced effective controlled irradiation. Caenorhabditis elegans was found to be an ideal organism for this study. It is a simple organism with few cells and a translucent thin body surface. The diameter of the laser beam to be used in the study was 3,000 μm, which is greater than the size of C. elegans in stages L3 and L4 (about 650 μm) that were used in the study. Thus, the whole worm could be placed in the irradiation target area. Using this model organism, we aimed to prove that light can not only alter a cell, but also a small organism and influence its life activities [1].

Suzuki et al. reported in a review article that an infrared laser induced gene expression in targeted single cells of C. elegans [2]. They used coumarin 440 nm dye laser as a heat source for 3 to 10 min to irradiate C. elegans in order to activate the heat promoter gene and induce specific gene expression. The outcome of such experiments was that an external light source could positively influence gene expression in a small organism. This can be used as a strategy to manage an organism by using a light source to act on a gene directly. It is difficult to alter DNA even by using methods such as vectors, plasmids, or chemical agents. Compared to these methods, light is a sterile, fast, and pure source and can directly react with nucleotide molecules through light energy absorption [1, 3, 4]. Thus, gene expression can be altered by a light source, and no chemical agents, plasmids, or viral vectors are required. Similar experiments of activating heat promoter genes were performed using optical tweezers. Leitz et al. reported the use of 700-850 nm laser to irradiate C. elegans for 30 to 240 s to increase the temperature and cause temperature-dependent hsp16-lacZ transgene expression [5].

The 266-nm laser used was from quadruple Nd-Yag 1064-nm laser; this wavelength was selected because it falls within the absorption spectrum of nucleotides and DNA [1, 3, 4]. It was used to kill cancer cells (HeLa cells) by Karu, but cellular proliferation and increased DNA synthesis were observed in some cases [10]. The use of wavelengths of 440 nm and 700-850 nm in previous studies were based on the thermos effect that causes activation of heat promoter transgene expression; however, these wavelengths do not fall in the range of the nucleotide absorption spectrum. The wavelength of 266 nm used in this study is in the range of the nucleotide absorption spectrum and has never been used earlier for studying the egg-laying behaviour of C. elegans.

I Laser Machine and Laser Light

The Minilite laser machine was purchased from Continuum (Santa Clara, CA, USA). The active Q-Switched Nd:YAG laser produces horizontal polarised infrared light at 1,064 nm. An optional non-linear crystal in the beam can double, triple, and quadruple the frequency of this light at 532, 355, and 266 nm, respectively. A prism was set up to refract the 266-nm laser directly to the target, a cross marker on the microscopy plate. The laser was detected using fluorescent paper. The laser pulse width was 5 ± 2 ns, pulse intensity was 30 μJ, and the firing frequency was 10 Hz. The laser intensity was calibrated in μJ using a Micro Joule Meter of PEM 100 Display procured from LTB Lasertechnik (Berlin, Germany).

C. elegans strain NL5901 was cultured on nematode growth medium (NGM) agar in 30 or 60 mm petri dishes. The NGM was supplemented with Escherichia coli OP50 as a food source, which was pre-cultured in Luria–Bertani broth. The plates were incubated at 20°C in a Firstek Model RI-30 incubator, and C. elegans was observed under an Olympus SZ61 microscope (Tokyo, Japan). A platinum wire was used to pick up individual C. elegans.

A fresh drop of OP50 cells was seeded at the center of the NGM agar dish. Next, C. elegans NL5901 was cultured in a 60 mm petri dish. Twenty C. elegans nematodes in stages L3 and L4 and approximately 650 μm in size were selected and individually placed in 30 mm dishes. The dishes were randomly divided into two groups, with 10 samples each in the control and experimental groups. The laser target was measured using a cross marker. C. elegans was observed under a microscope and moved to the center of the cross marker by adjusting the dish, followed by exposure to a 266-nm laser at 30 μJ for 1 s. The control group was not irradiated with the laser. Nematode activity was observed for 1 min, and the plates were incubated at 20°C. Nematode activity and the number of eggs laid were evaluated every 24 h by microscopy. The mother nematode was moved to a new dish using a platinum wire. The condition of the nematodes was examined every day until the worms died, which is marked as “D” in the recording list.

I Number of Eggs Laid by C. elegans in the Experiment 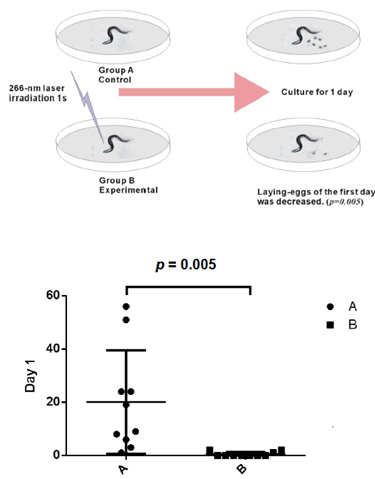 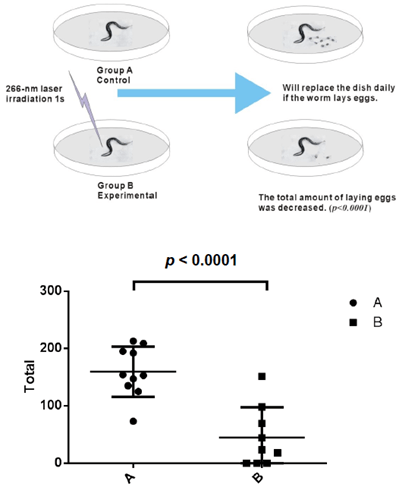 II Effect of 1 s 266-nm Laser Irradiation on the Longevity of C. elegans

The worms were observed every day and marked “D” in the list when the worm died. The number of days that the nematodes survived did not significantly differ between the experimental and control groups (Figure 3). 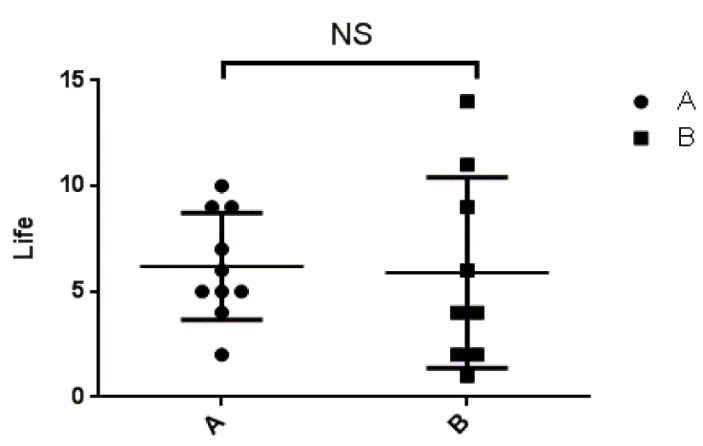 In this study, we determined the inhibitory effect of light at a specific wavelength on the egg-laying behaviour and total egg production of C. elegans. We earlier identified a protein, CD90, that could be regulated using a 266-nm laser irradiation [1]. Here, we reported that the life activity of laying eggs in the small organism C. elegans could be inhibited by a 266-nm laser irradiation. We report an experiment to use light as a tool to alter a life activity in a small organism.

In past literature, some successful studies were reported. Karu reported unexpected cellular proliferation and increased DNA synthesis when using a 266-nm laser to kill cancer cells (He La cells) [10]. Light can alter protein expression [1, 11]. It was also reported that light can alter protein expression in a small organism such as C. elegans by triggering heat promoter genes [2, 3].

Many lasers with different wavelengths were used in previous studies. Light is a very special agent – different wavelengths have different effects, and light can directly interact with atoms or molecules and transfer energy [1, 3]. The use of laser is a unique way to shift from the traditional pharmacokinetic pathways to act on the target molecules directly. Some successful studies of using light with a wavelength of 315-750 nm to alter some proteins related to vision have been reported [11]. Another study used 440-nm dye laser to activate heat promoter transgene of C. elegans, thus altering gene expression [2, 5]. However, very few trials used a 266-nm wavelength light in studies. It is worth mentioning that this wavelength of light is important as it is located in the absorption spectrum of nucleotides and DNA [1-3]. This is the first study to report that a 266-nm laser could influence a life activity in a small organism such as C. elegans in a very short time of exposure.

A laser emits monochromatic light at a specific wavelength. The specific effect of the light emitted by the laser varies based on the power strength, pulse width, frequency, and exposure time [1]. In this study, we used a 266-nm laser with 30 μJ pulse energy, 5 ± 2 ns pulse width, 10 Hz frequency, and 1 s exposure time to treat the whole worm. In comparison, Suzuki et al. used 0.02 μJ/pulse laser at 4 to 10 Hz and 3 min exposure time to active the heat promotor transgene; Leitz et al. used optical tweezers (700-850-nm laser) with 360 mW power and an exposure time of 30 to 240 s to induce the expression of hsp16-lacZ transgene and subsequent gal [2, 5]. A 266-nm laser was used for the first time in the present study; the use of a different laser intensity is unique to this study and can pave the way for further investigations.

Egg-laying behaviour has been researched earlier but not understood completely [6]. It was reported earlier that egg-laying behaviour is related to the neuronal circuit and VC control [6]. The total number of eggs laid in the life span of C. elegans could be related to the maturation of egg production. However, the number of eggs laid on the first day may also be related to egg delivery. As this process is complicated and unclear, we did not investigate the underlying mechanisms thoroughly; this study only focused on the evidence that light could change a life activity of a small organism. We investigated whether a small organism could be influenced by light exposure, since light can influence proteins, and proteins form the basic functional units in life activities [1].

This is the first study to use a 266-nm laser on C. elegans to influence the egg-laying behaviour. Our study showed that even 1 s irradiation caused major changes inside the worm. Although the study was a small experiment and underlying changes need further investigation, it proved the hypothesis that light could alter the life activities such as laying eggs in a small organism.

This is the first study to show that 266-nm laser exposure can alter the egg-laying behaviour of C. elegans; it is also the first study designed for C. elegans, wherein the impact on the initial and total quantity of eggs laid has been studied. In addition, the lifespan of the worms was not affected in this study, in contrast to results reported previously (Figure 3) [12].

In summary, we observed an inhibitory effect of light at a specific wavelength on the egg-laying behaviour and egg production of C. elegans. Thus, as seen previously, not only can light regulate protein expression in a cell or influence life span of mice, it can also influence a life activity in a small organism, as seen in this study [1, 13]. The data from this study provide great insights for future phototherapy. However, it may take some time to understand the mechanisms underlying this phenomenon and to promote its potential practical use.

We thank Jien-Lin Charng and Yun-Ru Ruby Chen of Genomic Center of Academia Sinica, for the free supply, direction and management of C. elegans. We thank Yi-Sheng Wang and Yu-Meng Ou at the Genomic Research Center, Academia Sinica, Taiwan, for technical assistance with laser setup. We thank Chung-Yi Wu for the support of laboratory.

Requests for materials should be addressed to R. L. H. (rayling.hsiao@msa.hinet.net).

© 2023 Ray Ling Hsiao. This is an open-access article distributed under the terms of the Creative Commons Attribution License, which permits unrestricted use, distribution, and reproduction in any medium, provided the original author and source are credited. Hosting by Science Repository.
DOI: 10.31487/j.ACR.2022.02.04