Individual Dose Response and Radiation Origin of Childhood and Adolescent Thyroid Cancer in Fukushima II: Possibility of High I-131 Exposure as in Chernobyl

In our preceding paper, thyroid cancer incidence in Fukushima residents exposed at ≤18 years of age and detected in the 2nd round of thyroid screening (FY2014-2015) of the Fukushima health management survey (FHMS), demonstrated a linear response to individual external dose in the 0.5-2.5 mSv range [1]. To see a rough response of the incidence to thyroid dose for 10-year-old-children estimated in the United Nations Scientific Committee on the Effects of Atomic Radiation (UNSCEAR) 2020/2021, the external dose (x/mSv) was converted to thyroid dose (y/Gy) by the linear regression formula y = 0.0067x [1, 2]. A rough estimate of the excess relative risk per gray (ERR/Gy) was 213 (95%CI: 129, 297) for thyroid dose estimated in UNSCEAR 2020/2021. This value was more than 10 times higher than ERR/Gy of 5.25-23 from studies of childhood exposure to radioactive iodine after the Chernobyl accident [3-5]. Increased childhood thyroid cancer in Fukushima was found to come dominantly from radiation exposure from the nuclear accident.

However, the UNSCEAR 2020/2021 concluded that the apparent detected excess of thyroid cancers is probably unrelated to radiation exposure because a large excess of thyroid cancer, as seen in the FHMS screening, would not be expected at the absorbed doses to the thyroid estimated by the UNSCEAR Committee (226 (a)) [2]. The purpose of this paper is to find the reason for the high childhood thyroid cancer incidence after the Fukushima nuclear accident despite the estimated low thyroid dose.

Thyroid doses in Chernobyl were based on 350,000 direct thyroid dose measurements performed after the Chernobyl accident (B35) [6]. On the other hand, in Fukushima, only 1080 thyroid monitoring was carried out outside the evacuation zone by the use of a less-sensitive survey meter [7]. The measurements might have been a great underestimation because 55% of measured thyroid doses were negative or zero, suggesting that some doses other than background were subtracted from the measurements (A135,136, Table A20) [2].

Thyroid doses in UNSCEAR 2020/2021 report were constructed from simulated ‘external + inhalation’ dose and ingestion dose from food and drinking water, and the estimated ingestion dose was constant for all municipalities in Fukushima prefecture. Ingestion dose common to all the municipalities was decreased by 1/30 from 32.79 mGy (UNSCEAR2013, Table C10) to 1.1 mGy for 1-year-old infants [2, 8]. Thyroid dose might have been severely underestimated by adjusting many reduction factors so that the modeled dose of infants agreed with about half of the wrong thyroid monitoring measurements.

Thyroid ultrasound screening was performed as part of the FHMS for all 367,649 residents aged ≤18 years at the accident and 115 and 71 confirmed or suspected cancer cases were detected among 300,473 and 270,511 examinees in the 1st (FY2011-2013) and 2nd (FY2014-2015) round screening, respectively [1, 9]. In this paper, positive cases in fine-needle aspiration cytology were defined as cancer cases because 99.3% were confirmed to be malignant by surgery among 151 positive cases. Individual dose dependence of thyroid cancer was studied based on the radiation dose data of 36 cancer cases in the FHMS report and the distribution of individual external dose of 108,980 examinees with external dose data estimated for the first four months after the accident [1, 10]. Details of the thyroid ultrasound screening, dose estimation, and statistical analyses were described in [1].

It was important to know the extent of underestimation in UNSCEAR 2020/2021 report for understanding the high childhood thyroid cancer incidence in Fukushima despite the estimated low thyroid dose. The unit gray of thyroid dose estimated in UNSCEAR 2020/2021 for 10-year-old children was labeled GyUN2021 to distinguish it from the thyroid dose unit Gy based on direct thyroid dose measurements in Chernobyl. We aimed to find a rough estimate of the conversion coefficient k connecting thyroid doses in UNSCEAR2020/2021 for 10-year-old children and doses of Chernobyl based on direct thyroid measurements: 1 GyUN2021 = k × 1 Gy. We estimated k by comparing incidences and dose dependences of thyroid cancer in Fukushima and Chernobyl after the nuclear disasters. The thyroid examination dataset used in this paper was deidentified and publicly available, so no ethical review was required.

I Incidence of Thyroid Cancer in Fukushima was Comparable to Chernobyl

First, the incidences of thyroid cancer after the Fukushima and Chernobyl nuclear accidents were compared. The FHMS committee considered that the incidence of about 3.3 cases /10,000 in the 2nd round of screening was dozens of times excess thyroid cancer detection compared to the expected incidence from the Japanese cancer registry of about 0.06 /10,000 in the average interval of 2.12 years between the 1st and 2nd round screening [11, 12]. The ratio of the observed cases /expected cases: about 60 in Fukushima prefecture in 5 years after the accident, was comparable to or higher than the ratios observed in 5-9 years after the Chernobyl accident: 30 in Gomel city, 56 in Gomel rural, and <10 in other areas in Ukraine, Belarus and Russia (Table 1) [3]. This suggested a comparable or higher exposure to radioactive iodine in Fukushima than in Chernobyl. It should be noted that annual medical examinations including ultrasound imaging, were set up in Belarus shortly after the accident to survey children for thyroid disease and 62% of the thyroid cancer cases among children were found by this examination [4].

III Correction of Exposure Dose by the Baseline Dose

Although cancer incidence by prefectures became unavailable by the Cancer Registry Promotion Act of 2013, the incidence of thyroid cancer in western Japan presumably stayed at the level of cancer registry before 2011 because radioactive plumes from NPP rarely reached western Japan [13]. The reason for the high incidence at zero thyroid dose in the EAR-dose plot might be in the estimation of thyroid dose by UNSCEAR 2020/2021. Ingestion dose of 10-year-old children common to all the municipalities in Fukushima prefecture was decreased from 15.24 mGy in UNSCEAR 2013 to 0.95 mGy in UNSCEAR 2020/2021 [2, 8]. There might be some other underestimations in the “external + inhalation” dose such that the minimum dose of all residents in Fukushima prefecture was underestimated. We propose a correction of adding a baseline dose (BLD) to recover the underestimation of thyroid dose in Fukushima prefecture as compared to the least contaminated prefectures in Japan of dose≅0.

To see the effect of BLD in Fukushima prefecture, dose responses were plotted based on (Table 1) for the assumed BLD of 2.5 mGyUN2021 and 4.45 mGyUN2021 in addition to the plot for BLD=0 (Figure 1A). The incidence-dose plot moves parallel to the positive dose direction as BLD increases, and the intercept decreases from positive to negative. The incidence of 0.03/104 PY at zero dose for BLD=4.45 mGyUN2021 agreed with the expected incidence from the cancer registry as shown by violet square near the origin of (Figure 1A), for thyroid dose of 0.073-0.63 mGyUN2021 of group 4 -rest of Japan (Table 8) [2]. The high incidence at dose=0 of the EAR-dose plot (BLD=0) might come from neglected or nearly neglected ingestion dose in external dose estimated by FHMS and in thyroid dose estimated by UNSCEAR 2020/2021. 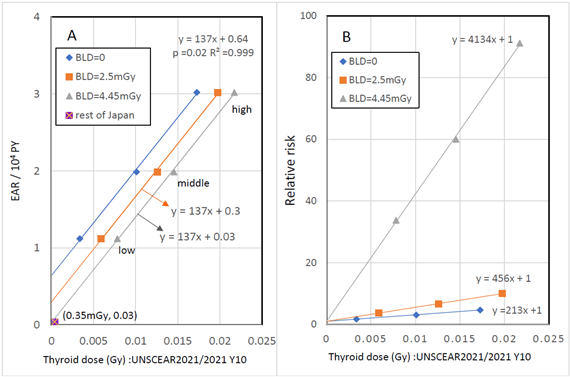 Jacob et al. found a linear increase of the EAR/104 PY to thyroid dose (Gy) in Chernobyl during 1991-1995, where expected cases were taken from the incidence in southern Ukraine of 4.2 /106 PY [3]. The EAR/104 PY values were calculated from the excess absolute risk per gray (EAR/Gy) and average thyroid dose values of eight areas in Chernobyl (Table 1) [3].

The coefficient was estimated to be k ~110 and 66 from the ratio of the mean thyroid dose for BLD=0 and 4.45 mGyUN2021 and thyroid dose in Chernobyl corresponding to the incidence in Fukushima (Table 1).

V Much Higher ERR/Gy in Fukushima than in Chernobyl

It seems better to compare the dose dependence of EAR/PY than ERR/Gy among nuclear accidents if thyroid dose was not measured directly as in Fukushima.

Table 2: A) The EAR /104 PY Gy and ERR/Gy from the regression analyses of individual dose groups in the 2nd round screening of FHMS. B) Chernobyl cases.

The National Institute of Radiological Sciences estimated equivalent thyroid doses from the data of Unno et al., 119-432 mSv among mothers and 330-1190 mSv in their infants living 45-220 km south or southwest of the Fukushima nuclear power plant [14, 15]. OurPlanet-TV reported that radioactive contamination of vegetables exceeding those of designated wastes, e.g., spinach with 43,000Bq/kg of I-131, was detected in unpublished food data of Fukushima Prefecture on March 19, 2011 [16, 17]. Central wholesale market in Fukushima city was open, and contaminated vegetables were distributed until March 21, 2011. Assuming thyroid equivalent dose coefficients for 5-year-old children of 2.1 × 10-6 Sv/Bq, thyroid dose from ingestion of 5-year-old children eating the spinach 200g/day for 6 days after the massive radioactive release on March 15th was calculated to be 136 mSv. The real thyroid dose might have been significantly larger than the estimated thyroid dose from ingestion of 0.95 mGy for 10-year-old children in UNSCEAR2020/2021. Tsuda et al. reported the details of poor I-131 exposure measurements in Fukushima and the reduction of dose assessment values by WHO and UNSCEAR [7]. They proposed the need for alternative measurements of thyroid dose, such as the incidence of childhood thyroid cancer, owing to the large gap among the estimates, ranging from less than 1 mSv to more than 1000 mSv.

TK designed the study, collected the data. TK and KY performed the statistical analysis. TK wrote the initial draft. Both authors reviewed the article, participate in editing and approved the final version of the manuscript.

© 2023 Toshiko Kato. This is an open-access article distributed under the terms of the Creative Commons Attribution License, which permits unrestricted use, distribution, and reproduction in any medium, provided the original author and source are credited. Hosting by Science Repository.
DOI: 10.31487/j.COR.2022.04.02

Table 2: A) The EAR /104 PY Gy and ERR/Gy from the regression analyses of individual dose groups in the 2nd round screening of FHMS. B) Chernobyl cases.