Objectives: A phase III clinical trial evaluating adjuvant vaginal brachytherapy (VBT) and three cycles of chemotherapy for patients with at-risk surgical stage I-II endometrial carcinoma did not find a survival advantage compared to standard pelvic external beam irradiation. We performed a retrospective review at our institution examining our management approach to this patient population.
Methods: 54 patients with surgically resected at-risk stage I-II endometrial carcinomas were treated adjuvantly between 1/1/2000 and 12/31/2014. Their medical records were abstracted retrospectively for pathological, clinical and follow-up data. Patients were followed for a minimum of two years.
Results:Median follow-up was 47.6 months. 22 patients underwent 0-3 cycles of adjuvant chemotherapy and VBT (Group 1), and 32 received > three (median: 6) cycles of chemotherapy with VBT (Group 2). Toxicity was similar between treatment cohorts [2/22 (9.1%) in Group 1 vs 2/32 (6.3%) in Group 2, p=1.0]. The estimated 5-year disease-free survival rate (DFS) was 84.3% for all 54 patients. Patients in Group 1 had an estimated 5-year DFS of 87.5% versus 81.3% for those in Group 2 (p=0.237). The estimated 5-year overall survival (OS) was 97.9% for all patients.
Conclusions: In this retrospective study, there was no significant increase in patient toxicity or disease-free survival with more than three cycles of chemotherapy coupled with VBT for women with at-risk stage I/II endometrial carcinoma. A prospective clinical trial is recommended to further assess the efficacy of more than three cycles of chemotherapy and VBT as an adjuvant treatment option for this patient population.

An estimated 63,230 women will be diagnosed with endometrial cancer in the United States in 2018, making it the fourth most common cancer in women [1]. Initial treatment for endometrial cancer consists of surgical staging, usually with a total abdominal hysterectomy and bilateral salpingo-oophorectomy [2]. Most patients with endometrial cancer are staged with International Federation of Gynecology and Obstetrics (FIGO) stage I or II disease with 5-year disease-specific survival ranging from 80-96% in these early-stage patients [3].

Clinical trials have defined a subset of patients with stage I or II endometrioid endometrial carcinoma, deemed high-intermediate risk (HIR), to have increased rates of disease recurrence and therefore benefit from adjuvant pelvic external beam radiotherapy (EBRT) [4, 5]. Other data have found patients with endometrial carcinomas at-risk for recurrence include women with FIGO stage IB or II disease with grade 3 pathology, clear cell or uterine papillary serous carcinoma (UPSC) histology, or positive lymphovascular invasion (LVSI) [6]. In the second Post-Operative Radiation Therapy in Endometrial Carcinoma (PORTEC-2) trial, women with HIR early stage endometroid endometrial carcinoma were randomized to adjuvant therapy with vaginal brachytherapy (VBT) or pelvic EBRT [7]. Patients who received adjuvant VBT had similar rates of locoregional recurrence and overall survival (OS) with less treatment toxicity compared to patients who received adjuvant pelvic EBRT. Of note, most patients in this study had the equivalent FIGO 2009 surgical stages of grades 1 or 2 IB or grade 3 IA endometroid endometrial carcinoma, and only 10-12% of all patients had positive LVSI.

This study was approved by the University of Miami Institutional Review Board (IRB). The electronic medical record (EMR) of eligible patients was reviewed and clinical data was entered into a Research Data Electronic Capture database (REDCap). Patients included in this study were diagnosed with at-risk stage I or II endometrial carcinoma and treated at Jackson Memorial Hospital or the University of Miami/Sylvester Comprehensive Cancer Center between January 2000 and December 2014 with total abdominal hysterectomy and bilateral salpingo-oophorectomy followed by adjuvant VBT and optional chemotherapy. At-risk early stage endometrial carcinoma was defined as stage IB or II clear cell carcinoma or UPSC, any grade stage II adenocarcinoma or stage IB adenocarcinoma with grade 3 disease, and/or LVSI as previously described [6]. Patients were surgically staged according to the 2009 FIGO staging system [10]. Patients were excluded if they received pelvic EBRT during the adjuvant treatment course, if they had less than two years of follow-up from initial pathologic diagnosis, or if they had sarcoma histology. One study estimated that 64% of endometrial cancer recurrences occur within 2 years and 87% within three years; therefore, a minimum of two years of follow-up was selected to accurately capture the recurrence rate in our population [11]. Clinical and treatment characteristics collected included age at diagnosis, cancer histology (adenocarcinoma, UPSC or clear cell carcinoma), FIGO stage and grade, presence of LVSI, the number of lymph nodes collected and positive for metastatic disease, VBT type (high-dose rate versus low-dose rate) and the number of chemotherapy cycles received. Institutional adjuvant treatment policy was established for patients with at-risk stage I/II endometrial carcinoma to receive six cycles of chemotherapy interdigitated with vaginal brachytherapy. However, due to patient preference, the majority of patients did not receive the full six cycles of chemotherapy. Thus, patients with this treatment intention were retrospectively separated into two different treatment cohorts for analysis: 0-3 cycles of adjuvant chemotherapy and VBT (Group 1) and more than three cycles of chemotherapy with VBT (Group 2).

Patient outcomes included CRT toxicity, recurrence of disease, and death. CRT toxicity was assessed by chart review and graded according to the Common Terminology Criteria for Adverse Events (CTCAE) version 3 [12]. Disease-free survival (DFS) was defined as elapsed time from date of pathological diagnosis to date of documented recurrence or death from any cause. Event-free patients were censored at date of last assessment of recurrence. Overall survival (OS) was defined as elapsed time from date of diagnosis to date of death or last known to be alive (censored observations).

Demographics and other disease-related variables were summarized for the total patients and separately for each treatment group using descriptive statistics. The distributions of categorical variables between the two treatment groups were compared using the Fisher’s exact test or the chi-squared test and means of continuous variables were compared using the two-sample t-test [13]. DFS and OS curves were estimated using the Kaplan-Meier method and were compared between groups using the log-rank test [14]. Findings were considered statistically significant if the P-value was ≤ .05. All statistical analyses were performed with statistical software package SAS ® version 9.4 (SAS Institute Inc., Cary, NC, USA). 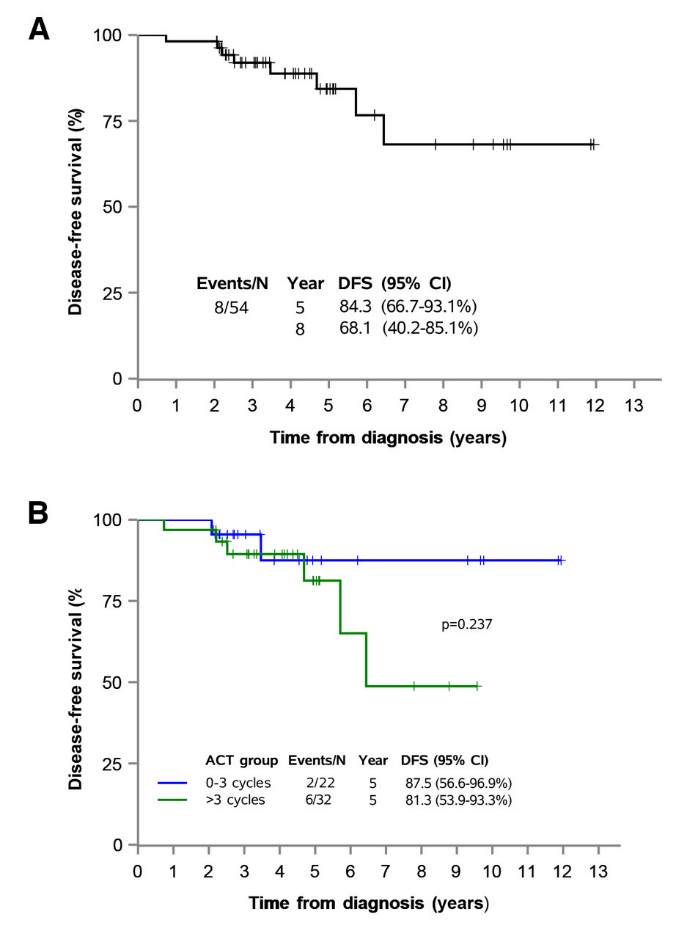 Patients were followed for a median of 47.6 months. In all 54 patients included in this review, there were seven patients with disease recurrence (sites of relapse not available) and three deaths (Table 2). The breakdown of recurrences revealed two recurrences in Group 1 with a mean age of 66 and five recurrences in Group 2 with a mean age of 61. Tumor characteristics amongst all recurrences were as follows: there were six patients with stage I disease, one with stage II disease; 4 patients with UPS C, two with clear cell carcinoma and one with endometroid histology; lastly, four out of seven patients had LVSI present. All patients with recurrence were treated with HDR brachytherapy and six out of seven had a lymphadenectomy performed (all six nodal negative). Two deaths were in patients with disease recurrence and the third death was due to unknown cause. This translated into an estimated 5-year OS of 97.9% (95% confidence interval [CI]: 85.8-99.7%) and an estimated 5-year DFS of 84.3% (95% CI: 66.7-93.1%) for all 54 patients (Figure 1A). There was no significant difference (p=0.237) in 5-year estimated DFS between patients in Group 1 (87.5%; 95% CI: 56.6%-96.9%) and in Group 2 (81.2%; 95% CI: 53.8%-93.2%) (Figure 1B).

The GOG-99 trial and PORTEC-1 trial established the benefit of adjuvant RT in early stage endometrial carcinoma patients with HIR disease [4, 5]. In this retrospective analysis comparing outcomes of at-risk stage I-II endometrial carcinoma patients at our institution treated with total abdominal hysterectomy, bilateral salpingo-oophorectomy and adjuvant VBT with optional chemotherapy we achieved excellent outcomes with 5-year DFS of 84.3% and 5-year OS of 97.9%. Moreover, there was no significant difference in 5-year DFS between adjuvant treatment of more than 3 cycles of adjuvant chemotherapy and 3 or less cycles of adjuvant chemotherapy in this patient population. In addition, there was no significant difference in toxicity between cohorts.

In the current analysis, 21/54 (38.9%) patients had presence of LVSI, a poor prognostic indicator for disease recurrence [17, 18]. Interestingly, four out of seven recurrences occurred in patients noted to have LVSI. Endometrial carcinoma patients with the presence of LVSI may achieve greater survival benefit from addition of adjuvant chemotherapy [19]. Another unique feature of this analysis was that the endometrial carcinoma tumors treated in this study were predominantly (32/54, 59%) non-endometrioid histology, also a poor prognostic indicator [20]. Patients with early stage endometrial carcinoma consisting of non-endometroid histology have been shown by prior single-institutional studies to benefit from adjuvant therapy consisting of CRT with paclitaxel and carboplatin [21-23].

Endometrial carcinoma patients treated with adjuvant RT most commonly recur distantly, even with adjuvant chemotherapy [24, 25]. However, 15-year follow-up results from the PORTEC-1 trial found that in the absence of adjuvant therapy most early stage endometrial carcinoma patients recur at the vaginal cuff [26]. Thus, adjuvant CRT consisting of VBT would optimally cover distant recurrence and the most common site of locoregional recurrence at the vaginal cuff [27].

In this study there was no difference in toxicity between patients who received 3 or less cycles of adjuvant chemotherapy and more than 3 cycles of chemotherapy, with a toxicity of 7.7% amongst all patients. Comparing the toxicity data of the present retrospective study with larger prospective trials is difficult, but the relatively low toxicity rate reported in this analysis illustrates the potential for VBT to eliminate the toxicity associated with pelvic EBRT. Likewise, five-year follow-up of patients treated in the PORTEC-2 trial found that patients treated with adjuvant VBT experienced lower rates of bowel symptoms and better social functioning relative to those in the pelvic EBRT arm [28]. Smaller analyses of patients treated with VBT alone have reported a complication rate of less than 1% [29, 30]. Although the addition of adjuvant chemotherapy increases the treatment toxicity, long-term toxicity experienced by patients receiving adjuvant VBT with chemotherapy remains low to absent [15, 31].

Limitations in the present study include possible selection bias inherent in retrospective studies and a relatively small number of patients. Although treatment groups were primarily secondary to patient preference, there was no difference in age or other patient characteristics between groups. The limited patient total (n=54) is reflective of the strict clinicopathological, treatment, and follow-up criteria employed in this analysis to create a homogenous patient cohort that meets criteria for at-risk early stage endometrial cancer. The small number of patients and relatively favorable outcomes led to a low number of events, leading to difficulty in detecting differences in DFS. Nearly half (10/22) of Group 1 patients receiving adjuvant VBT alone further obfuscates the effectiveness of increasing the number of cycles of chemotherapy. As there were only three deaths recorded in this cohort, we are unable to analyze differences in OS. The sites of relapse were unavailable for the patients with recurrence of disease. This missing data would provide a better understanding of the impact on patterns of failure with adjuvant VBT and chemotherapy that could guide future modifications in managing this patient population.

This research was supported through funds provided by the University of Miami Miller School of Medicine/Sylvester Comprehensive Cancer Center Department of Radiation Oncology.

© 2021 Benjamin Rich. This is an open-access article distributed under the terms of the Creative Commons Attribution License, which permits unrestricted use, distribution, and reproduction in any medium, provided the original author and source are credited. Hosting by Science Repository.
DOI: 10.31487/j.ACO.2018.01.005