Haematobiochemical responses following epidural administration of ropivacaine to West African Dwarf (WAD) goats were studied. Complete analgesia of the flank, abdomen and hindlimbs was achieved in all the goats. Transient non- significant (p > 0.05) increase in haematocrit and neutrophil values and a transient lymphocytopaenia were observed at 1 hour post epidural drug administration. There was also a transient non- significant increase (p > 0.05) in RBC, haemoglobin, WBC but decrease platelets at 1 hour post epidural drug administration. There was no significant difference in the values of the haematological parameters from baseline values except neutrophil and lymphocyte values which had significant (p<0.05) decrease and increase respectively at 3 hours post anaesthesia compared with the values at 1 hour post drug administration. There was a transient non-significant (p˃ 0.05) decrease in AST and ALT values, and a marked non-significant (p˃ 0.05) decrease in ALP value at 1 hour post drug administration in comparison with base line values. Creatinine and BUN had fluctuating values with no significant change. It was concluded that epidural ropivacaine anaesthesia produced good epidural analgesia with no systemic toxicity and without adverse effects on the haematology, renal and hepatic biomarkers in West African Dwarf goats and may be recommended as an alternative to other local anaesthetic amides especially in West African Dwarf goats with debilitating diseases, prolonged dystocia and chronic ruminal tympany, where drug toxicity and safety are major concerns.

Goats are the most numerous of all meat- producing ruminant stock in Nigeria with an estimated population of 72.5 million, compared to 41.3 million sheep and 19.5 million cattle [1]. Goat production in Nigeria makes a major contribution to the agrarian economy. The goat population has the potential and prospects for further increase due to certain factors described by Terril (1983), Emaziye and others (2021) [2, 3].

The West African Dwarf (WAD) goats are found in the region south of latitude 14ºN across West Africa in the coastal area [4]. An increasing goat population should be expected to lead to an upsurge in demand by goat farmers for veterinary surgical services necessitating the use of anaesthetics. Locoregional anaesthetic techniques are preferred over general anaesthesia in ruminants because they are associated with less hazard in these species [5-7]. Epidural anaesthesia, is a form of regional anaesthesia produced by injecting local anaesthetic agents into the epidural space, resulting in temporary sensory and motor paralysis of the spinal nerves [5, 8]. Lumbosacral epidural anaesthesia is the most common epidural technique used in the sheep, goat and calf for all surgical procedures caudal to the umbilicus [9].

Ropivacaine is an amide linked local anaesthetic agent, which was recently developed for use in human medicine but has not been used widely in veterinary practice [10, 11]. It reportedly lowers the propensity for motor block and reduces potential for CNS toxicity and cardiotoxicity compared with bupivacaine and appears to be an important option for regional anaesthesia and for the management of post-operative and labour pain in man [12, 13]. Ropivacaine is a long-acting amino-amine local anaesthetic agent and has been used for epidural anaesthesia alone or in combinations with other drugs in some caprine breeds [14-18]. A recent study evaluated its combination with lidocaine in WAD goats and concluded that ropivacaine alone is best for long surgical procedures [19]. However, there is paucity of information in literature investigating the effect of this new amide local anaesthetic agent given epidurally on haematology and serum chemistry in WAD goats as a way of further establishing its suitability in this widely reared breed of goats in Nigeria. The aim of this study, therefore, was to evaluate the haematobiochemical changes following epidural ropivacaine anaesthesia in WAD goats.

Five clinically healthy goats (two castrate bucks and three non- pregnant, non-lactating does) aged between 1 to 3 years, weighing 14.5 ± 1.55 kg (Mean ± SD) with weight range between 10 and 17 kg, were used in conducting this study. The goats were housed in a well-ventilated pen with corrugated roofing sheets and a concrete floor. They were fed with cassava and yam peelings, supplemented with a cereal-based concentrate ration at a rate of 0.5kg/head/day. Salt lick and fresh, clean water were provided ad libitum in the pen.

With the goat restrained manually in sternal recumbency and the hind limbs directed cranially, an area 5cm wide and 8cm long was clipped and surgically prepared for sterile procedure. The lumbosacral junction was located as described by Borer-Weir (2014). A skin bleb was made with 0.5ml lidocaine. A 21-gauge 3.25 cm long hypodermic needle was inserted percutaneously at the lumbosacral junction and advanced into the epidural space. Placement of the needle in the epidural space was confirmed by the hanging drop technique [20]. A syringe with hypodermic needle containing a calculated volume of ropivacaine was inserted, and the drug was injected into the epidural space. The dosage of ropivacaine used was 1mg/kg body weight [14]. The goat so treated was supported in sternal recumbency for about 2 min following drug injection to ensure that a bilateral rather than unilateral blockade was achieved. The development of motor and sensory blockade was assessed by the goat’s inability to stand on its hind limbs and serial pricking of the goat’s hind limbs, perineum, flank and ventral abdomen caudal to the umbilicus with a needle was used to determine the onset and extent of analgesia on all or none basis.

Venous access was gained via the jugular vein with a 21-gauge needle and 5ml blood collected into heparinized bottle (2ml for haematology evaluation) and plain bottles (3ml for serum chemistry evaluation) before drug administration, and subsequently at one-hour intervals for three hours. Following epidural administration of the anaesthetic agent, the goats were placed at an isolated area to prevent disturbance, and to monitor the goats. Vital parameters were measured before drug administration and at ten-minute intervals later for a period of sixty minutes. Heart rate (HR) in beats/min was measured with a precordial stethoscope, respiratory rate (RR) in breaths per minute by observing thoraco-abdominal excursions and rectal temperature (RT) in °C using mercury-in-glass- clinical thermometer.

All data was expressed as Mean ± Standard deviation (SD). The means of the haematological and serum chemistry values at the time points were compared using analysis of variance (ANOVA) followed as appropriate by Tukey- Kramer multiple comparisons. A value of p<0.05 was considered significant.

Epidural blockade was achieved in all the goats evident by paralysis of the hind limbs (Figure 1). Each goat trashed about in unsuccessful attempts to stand up following caudal paralysis. 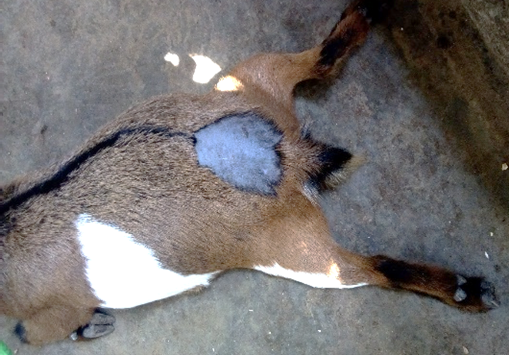 Figure 1: Showing goat on sternal recumbency with excellent hind limb paralysis and muscle relaxation after epidural administration of 0.75% ropivacaine hydrochloride at a dosage of 1mg/kg.

Table 1: Haematological responses of WAD goats before and at time intervals after epidural administration of 1mg/kg Ropivacaine hydrochloride. Data are expressed as Mean ± Standard deviation.

Table 2: Biochemical responses of WAD Goats before and at time intervals after epidural anaesthesia ropivacaine hydrochloride. Data are expressed as Means ± Standard deviation. *p<0.05 when compared with 0 hour.

The result of this study showed that epidural anaesthesia with 1m/kg ropivacaine produced analgesia of tail, perineum, inguinal and thigh regions and complete caudal paralysis in all the goats (Figure 1) with insignificant changes in haematology and serum chemistry.

Similar to findings recorded by Singh et al. (2005) and Kumari (2015), ropivacaine epidural anaesthesia in WAD goats elicited a transient increase in haematocrit and neutrophil values and a transient lymphocytopaenia at 1 hour post drug administration [21]. There was also a transient increase in RBC, Haemoglobin, WBC and Platelet values at 1-hour post drug administration. These changes may be due to systematic changes to hypotension, and resultant increase in vascular bed, caused by epidural anaesthesia [5, 22]. There was no significant difference in the values of the haematological parameters from base line values except neutrophil and lymphocyte values which had significant values (P<0.05) at 3 hours post anaesthesia when compared with 1 hour after administration. This finding of no significant effect of ropivacaine anaesthesia on haematological values is consistent with findings in similar studies in goats [14, 15, 17, 18, 23, 24]. There was a relative lymphocytopaenia in response to neutrophilia at one hour after drug administration. The increase in neutrophils and relative decrease in lymphocytes might be due to stimulation of lymph nodes caused by stress. Although a skin bleb was done to achieve a painless epidural injection, the conscious goats nevertheless struggled under physical restraint in the course of epidural drug injection. The stress response seen is most likely attributable to this struggle. Sedation may therefore be necessary to facilitate epidural injections. A decrease in lymphocytes count might also be attributed to the adrenocortical stimulation and subsequent effect of glucocorticoids on circulating lymphocytes [25].

There was a non-significant decrease in liver enzymes (AST, ALT and ALP) during the period of the observation. There were also non-significant changes to kidney function makers (BUN and creatinine) during the period of observation. This was similarly observed by Kumar (2011) and Kumari (2015), and it is a reflection of the acclaimed safety and less systemic toxicity of ropivacaine, since it shows no adverse reaction on renal and hepatic functions [24]. The non-significant decrease to total protein and albumin values observed in this study is similar to that obtained by Singh et al. (2005) and Kumari (2015) [21]. It might be correlated to plasma volume expansion due to anaesthesia [26]. The decrease in protein level also suggested an influx of fluid into the vascular space [27]. Stress is responsible for more production of glucocorticoids in the body which cause rapid mobilization of amino acids from storage tissue. Eventually, the protein sources are converted to carbohydrates for energy through glyconeogenesis, this way protein level is decreased [28]. This finding of no significant effect of ropivacaine anaesthesia on serum biochemical values is consistent with finding in similar studies in other goat breeds [14, 15, 17, 18, 23, 24]. Indeed, in a study to compare bupivacaine and ropivacaine, it was reported that only glucose among the haematobiochemical parameters (Hb, TLC, DLC, PVC, TEC, glucose, total protein, ALP, ALT, total bilirubin, BUN and creatinine) showed significant increase in animals in which ropivacaine was used, as compared to bupivacaine which showed significant decrease in glucose [29]. A notable observation is that changes to values of haemobiochemical parameters peaked at 1 hour post drug administration.

1 mg/kg ropivacaine hydrochloride induced good epidural analgesia with no systemic toxicity and without adverse effects on the haemobiochemical parameters in West African Dwarf goats. Ropivacaine, therefore, may be recommended as an alternative to other local anaesthetic amides (lidocaine, bupivacaine and mepivacaine) especially in West African Dwarf goats with debilitating diseases, prolonged dystocia and chronic ruminal tympany, where drug toxicity and safety are major concerns.

© 2021 Cecilia Omowumi Oguntoye. This is an open-access article distributed under the terms of the Creative Commons Attribution License, which permits unrestricted use, distribution, and reproduction in any medium, provided the original author and source are credited. Hosting by Science Repository.
DOI: 10.31487/j.ACR.2022.01.03

Table 1: Haematological responses of WAD goats before and at time intervals after epidural administration of 1mg/kg Ropivacaine hydrochloride. Data are expressed as Mean ± Standard deviation.

Table 2: Biochemical responses of WAD Goats before and at time intervals after epidural anaesthesia ropivacaine hydrochloride. Data are expressed as Means ± Standard deviation. *p<0.05 when compared with 0 hour.

Figure 1: Showing goat on sternal recumbency with excellent hind limb paralysis and muscle relaxation after epidural administration of 0.75% ropivacaine hydrochloride at a dosage of 1mg/kg.

1.     Ogbeh A (2016) Nigeria releases census of goats, sheep, pigs, other livestock in the country. Premium Times.

24.  Kumar D (2011) Studies on comparative evaluation of ropivacaine and its combination with medetomidine and buprenorphine for epidural anaesthesia in goats. A thesis submitted to the Department of Veterinary Surgery and Radiology, College of Veterinary Science and Animal Husbandry, Anjora, India.

25.  Soliman MK, Amrousi SE, Khamis MY (1965) The influence of tranquilizers and barbiturate anaesthesia on the blood picture and electrolytes of dogs. Vet Rec 77: 1256-1259. [Crossref]