Treatments for metastatic ovarian cancer to date have been limited by advanced stages at diagnosis, drug toxicity and resistance. Cancer patients are also increasingly looking towards complementary and alternative therapies. Graviola (Annona muricata) has traditionally been used in many conditions including cancer, and both in vivo and in vitro studies have shown evidence of anti-cancer effects. We present a case of a patient with metastatic ovarian cancer who progressed through multiple lines of chemotherapy but had a response and sustained stability in Ca-125 levels whilst taking graviola tablets. Further clinical research is warranted to evaluate graviola’s role in cancer therapy.

Ovarian cancer ranks sixth in cancer deaths amongst women in Australia, accounting for more deaths than any other cancer of the female reproductive system [1]. Treatment of ovarian cancer remains challenging; it is typically advanced at diagnosis, with two-thirds of cases diagnosed at stages III or IV [2]. In addition, many current treatments are limited by toxicity and drug resistance. New integrative treatment strategies must therefore be explored. There has been increasing interest in alternative treatment modalities that include complementary or alternative medicine, used alone or in combination with other systemic therapies. Graviola (Annona muricata) is a fruit tree that is prevalent in the rainforests of Africa, Southeast Asia and South America, and has traditionally been used for a wide range of diseases including cancer, inflammatory conditions, rheumatism, diabetes and parasitic infections [3]. Despite its widespread use by various cultures for centuries, scientific research on its health benefits remains extremely limited. We present a case demonstrating a significant period of clinical stability using graviola in a patient with metastatic ovarian cancer, whose disease had previously relapsed on multiple lines of treatment.

Mrs. M.D. was 68 years old when she was diagnosed with metastatic ovarian cancer in 2011, confirmed with a laparotomy revealing significant ascites, a large right 15 cm solid and cystic ovarian tumour, an enlarged right external iliac and a para aortic lymph node. She had optimal debulking surgery including bilateral salpingoophorectomy, pelvic lymph node sampling, para-aortic node dissection and infra colic omentectomy. Histology was consistent with a poorly differentiated carcinoma favouring papillary serous histology. The patient’s initial therapy included 6 cycles of carboplatin/paclitaxel from March-July 2011 followed by carboplatin/gemcitabine when she relapsed 6 months later. She continued to have elevated Ca-125 levels despite carboplatin/gemcitabine, confirming platinum refractoriness. Further treatment was withheld due to lack of symptoms. During this period, in December 2012, Mrs. M.D. started taking a complementary medication containing Annona muricata, also known as graviola. She experienced a rapid and dramatic decline in her Ca-125 from 404 kU/L to 296 kU/L within 6 months. She continued to have a sustained response with continually decreasing Ca-125 over 26 months down to 47 kU/L despite no other concurrent anti-cancer therapy (Figure 1). A second relapse occurred in February 2015 with a rising Ca-125 and a symptomatic left cerebellar metastasis requiring surgical resection and adjuvant radiotherapy. She increased her graviola tablets from 2 to 4 tablets a day. A steady decline in Ca-125 was again noted down to normal levels (see Figure 1) and she again experience disease stability on graviola tablets alone for 15 months.

She developed a third relapse with increased mesenteric fat stranding and lymphadenopathy in March 2017. Graviola was restarted after a further course of chemotherapy (carboplatin/liposomal doxorubicin), and her Ca-125 remained stable again for close to 12 months. Unfortunately, a fourth relapse with a new left cerebellar lesion and symptoms of nausea, abdominal fullness and bowel changes occurred in September 2018. She had a further 6 cycles of carboplatin/liposomal doxorubicin, with graviola recommenced after the final cycle, again with stable Ca-125 levels. At time of publishing, Mrs. M.D. has completed a course of radiotherapy for a fifth relapse with left groin nodal disease. She continues on graviola for now with monitoring of her Ca-125, now down to 9 kU/L. Our case highlight that despite an advanced disease with a poorly differentiated carcinoma at diagnosis, the relatively long periods of disease stability whilst being on graviola our patient experienced remains a remarkable phenomenon. In between her multiple relapses, she continued to show response to graviola. Such a pattern of stability and response achieved with graviola alone during these periods warrants further investigation. A graph of the trend of Ca-125 from diagnosis to time of publication is outlined in (Figure 1). 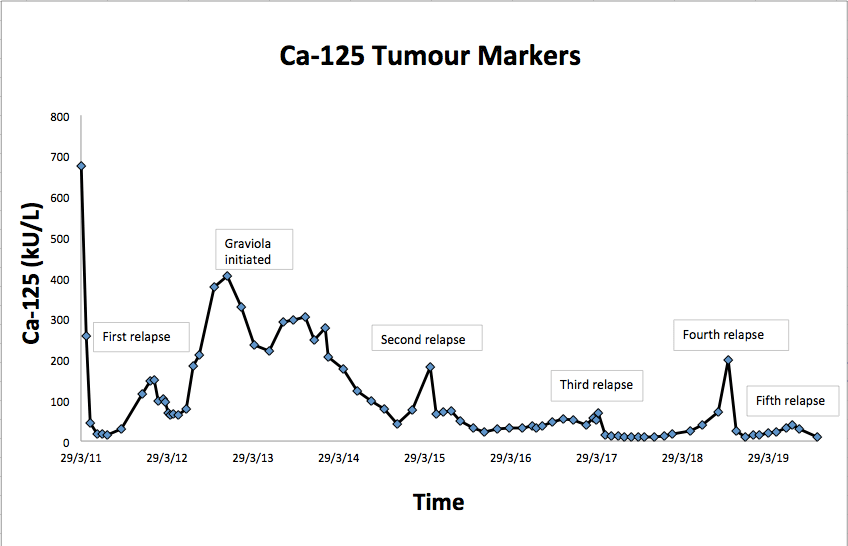 Figure 1: Serum Ca-125 trend in patient from diagnosis to time of publication. A decline in Ca-125 level and relative stability was noted after initiation and exclusive therapy with graviola (A. muricata). Her course has been interposed with multiple relapses but stable Ca-125 levels in between.

Annona muricata, also known as graviola, soursop and guanabana, is a tropical, semi-deciduous tree of the Annonacae family [3]. It is widely distributed and native to sub-Saharan Africa and is a plant with a long history of use in traditional medicine. A wide range of medicinal properties has long been attributed to different parts of the A. muricata plant, including anti-cancer, anti-convulsant, anti-arthritic, anti-parasitic, anti-malarial and anti-diabetic activities [3-5]. Today, it remains among the most common herbal remedies used amongst cancer patients [6]. Intriguingly, a wide variety of recent scientific investigations have substantiated many of these claims, with several of the benefits being demonstrated in both in vivo and in vitro models. The major bioactive ingredient of A. muricata is thought to be annonaceous acetinogenins (AGEs), phytochemicals that have been isolated from the plant [3]. Indeed, the Annona species is rich in a wide array of AGEs, with over 100 different AGEs already identified in A. muricata [7]. The anti-proliferative activity of AGE extracts of graviola has been reported towards a wide range of cancer cell lines, in particular prostate, liver, colon and lung cancer cells. The proposed mechanisms include regulating cellular metabolism and directly inducing cellular apoptosis.

I Regulation of cellular metabolism

The anti-cancer effects of AGEs are characterised by inhibitory effects against the mitochondrial complex I that is involved in adenosine triphosphate (ATP) synthesis [3]. One study demonstrated impairment of cellular metabolism when graviola extracts were treated against pancreatic cancer cells. Expression of molecules related to hypoxia and glycolysis were downregulated when treated with graviola extracts. They also inhibited expression of HIF-1α, NF-κB, glucose transporters, and glycolytic enzymes resulting in decreased glucose uptake and ATP production in these same cells [8]. Another study on human breast cancer cells demonstrated that graviola induced growth inhibition in vitro and in vivo through the EGFR/ERK signaling pathway, down regulating EGFR expression and growth of breast cancer cells selectively over normal breast epithelial cells [9]. Graviola extracts were also shown to block the access of human mammary adenocarcinoma cells to ATP and inhibit the actions of plasma membrane glycoprotein [10]. Similar effects were shown in studies on the on the HeLa cell line, in which the growth of 80% of the HeLa cells treated with a crude leaf extract of A. muricata were inhibited [11].

Direct induction of apoptosis of cancer calls by graviola extracts has been proposed as a major mechanism for its antiproliferative effects. The leaf extract of graviola, ethyl acetate, has been shown to directly induce apoptosis in colon and lung cancer in in vitro studies. In these studies, apoptosis occurred due to cell cycle arrest in the G1 phase by upregulating Bax and downregulating Bcl-2 proteins [5]. Induction of apoptosis was also demonstrated on in vitro and in vivo studies on prostate cancer cells [12]. In these studies, the sizes of rat prostates were shown to decrease after treatment with A. muricata leaves for 2 months. Induction of apoptosis was also demonstrated in myelogenous leukaemia K562 cells [13]. In liver cancer HepG2 cell lines, dose dependent anti-proliferative effects have been seen via increased ROS, another pathway to cell apoptosis¬ [14]. The suppressive effect on both prostate and breast cancer cell lines has been further demonstrated in additional mice models [3]. In prostate cancer, studies have shown that NAPDH oxidase, which is associated with progression of prostate cancer in mice models, is directly inhibited by the unique acetinogins in graviola pulp extract. Graviola pulp extract was shown to strongly inhibit hypoxia-induced NOX activity in prostate cancer cells and result in a reduction on the proliferative potential of these cells [15].

Aside from in vivo and in vitro studies, other isolated case reports have provided evidence for similar anti-cancer effects. Hansra et al. report a case of a 66-year-old female with metastatic breast cancer who achieved stabilization of her disease for 5 years by consuming dried graviola leaves boiled in water once a day in conjunction with oral capecitabine [16].

Use of graviola is not without its own adverse effects. In rodent models of hepatic cancer, the acetogenin bullatacin caused both liver and kidney toxicity with repeated treatments [17]. Its alkaloid components have also been associated with neurotoxicity including movement disorders akin to Parkinson’s disease, myeloneuropathy and acceleration of neurodegenerative diseases [18, 19]. Lower platelet counts, and packed cell volumes have also been noted in a study of rats given graviola [20].

Early studies with graviola have shown positive anti-cancer effects however these have been done in cell line and murine models. Treatment in cancer patients have been limited to case reports such as ours however there are promising clinical effects. Further studies are needed to elucidate the mechanisms of action, dose, formulation and potential adverse effects and interactions to enable graviola to be used in cancer patients, either alone or part of a holistic, integrated treatment approach.

Declaration of Interest and Acknowledgement

We wish to confirm that there are no known conflicts of interests with this publication and there has been no significant financial support for this work.

Informed consent has been obtained from patient for publication purposes.

© 2021 Thi Thuy Duong Pham. This is an open-access article distributed under the terms of the Creative Commons Attribution License, which permits unrestricted use, distribution, and reproduction in any medium, provided the original author and source are credited. Hosting by Science Repository.
DOI: 10.31487/j.COR.2019.06.03

Figure 1: Serum Ca-125 trend in patient from diagnosis to time of publication. A decline in Ca-125 level and relative stability was noted after initiation and exclusive therapy with graviola (A. muricata). Her course has been interposed with multiple relapses but stable Ca-125 levels in between.