Adrenocortical carcinoma is a rare malignant tumor which can reach large sizes if it is nonfunctioning. In that situation, it can pose diagnosis dilemmas regarding the origin and the nature of the tumor. We reported a case of non-secreting and large right Adrenocortical carcinoma which arose in the posterior costophrenic angle mimicking a liver tumor. A 45-year-old man presented with a voluminous abdominal mass in the right upper quadrant. The different imaging modalities including ultrasound computed tomography and magnetic resonance imaging were discordant as regards the hepatic or the adrenal origin of the tumor. Percutaneous biopsy allowed to determine the diagnosis of the cortico-adrenal tumor. The patient underwent laparotomy. The tumor which arose from the right adrenal gland was resected. Pathology confirmed the diagnosis of adrenocortical carcinoma with histological factors of poor prognosis. The patient was given Mitotane as adjuvant therapy. After six years of follow-up, a tumor recurrence has been diagnosed.

Adrenocortical carcinoma (ACC) is a rare but aggressive tumor [1]. Its diagnosis relies in most of the cases on hormonal workup and imaging [1]. However, in the case of a nonfunctioning and large tumor, the diagnosis of ACC may be difficult and other non-adrenal pathologic conditions may be discussed [2]. We reported a case of non-secreting and large right ACC which arose in the posterior costophrenic angle mimicking a liver tumor.

A 45-year-old man, with no previous medical history, complained of pain in the upper right quadrant for 3 months without fever or jaundice. The physical exam found a large poorly limited abdominal mass in the right upper quadrant. The rest of the physical exam was unremarkable. Abdominal ultrasound showed a large mass in the right upper quadrant of 17 cm which appeared heterogeneous, hyperechogenic and well circumscribed. The origin of this tumor was difficult to assess. Abdominal computed tomography (CT) showed the large mass which was well limited with peripheral contrast enhancement and a central necrotic area which contained some calcifications (Figure 1). This mass extended from the hepatic dome to the upper pole of the right kidney, which was pushed downwards. The right adrenal gland was not seen making the diagnosis of the hepatic or adrenal origin of the mass also difficult to determine. Elsewhere, there was no lymphadenopathy or metastasis. Magnetic resonance imaging (MRI) showed that this mass arose from segments 5, 6 and 7 of the liver. The tumor was heterogeneous, measuring 20 x 17 x 13 cm with hyposignal on T1- weighted images, hypersignal on T2-weighted images and early enhancement during the arterial phase then it became homogeneous in portal phase with persistence of a central area of necrosis (Figure 2.A). The mass was well circumscribed by a capsule which was hypointense on T1 and T2-weighted images. It came into contact with the right portal branch and the inferior vena cava which were repulsed to the left but remained permeable (Figure 2.B). Liver function tests were normal and both alpha-fetoprotein and CA19-9 levels were normal (4.2 ng/ml and 8.6 IU/l respectively). Given that the nature of the tumor remained indeterminate, a percutaneous CT-guided biopsy was performed, and it showed proliferating tumoral cells subdivided into groups by a delicate fibrovascular stroma. The tumor cells showed immune reactivity for synaptophysin, CD56 and Melen A whereas they were EMA, chromogranin A, inhibin and cytokeratin negative. These immunohistochemical features supported the diagnosis of the cortico-adrenal tumor. All hormonal tests (glucocorticoids, sexual steroid and steroid precursors, mineralocorticoids and metanephrines) were normal. The patient underwent laparotomy. The tumor arose from the right adrenal gland. It was easily dissected off the right kidney and the inferior vena cava, but it was densely adherent to the liver. A right adrenalectomy with lymph nodes dissection were performed. Then adjacent kidney was respected. The postoperative course was complicated by an infected biloma necessitating percutaneous CT-guided drainage. The patient was discharged home on postoperative day 29. Histopathology confirmed the diagnosis of adrenocortical carcinoma (ACC) of 19 x 16 x 11 cm. It showed a high mitotic index (5 mitosis /10 High Power Fields), a Ki 67 proliferation index of 10% and a Weiss score of 7 in favor of malignant ACC (Figure 3). Giving the high risk of tumor recurrence, Mitotane therapy was indicated for three years. After six years of regular follow-up; a tumor recurrence has been diagnosed by abdominal CT scan (Figure 4). It discovered many heterogeneous retroperitoneal masses. The largest is right spinal localization, measuring 6 cm, pushing the abdominal vena cava and the renal vessels forward. There was associated with many lobulated lymph nodes with central necrosis. 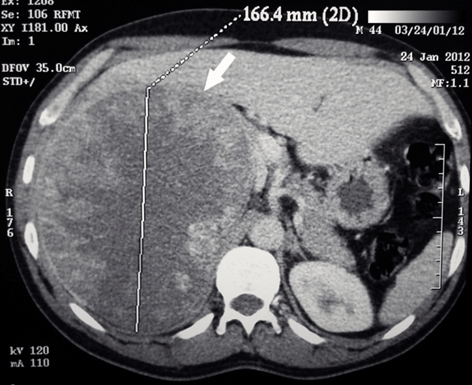 Figure 2: A. MRI showed on axial T2-weighted sequence with fat suppression, a large mass (white arrow) arising from segments 5, 6 and 7 of the liver. B. Coronal MRI slice showed a large mass extending from the right kidney to the diaphragm. The inferior vena cava (asterisk) was displaced to the left but remained permeable. 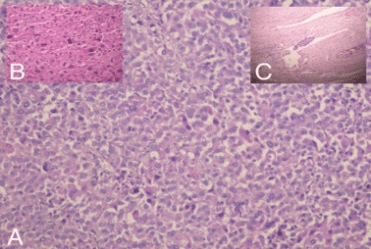 We reported a case of right ACC which presented a diagnostic challenge with a liver tumor due to its non-secreting status and its large size.

ACC is a rare, aggressive tumor arising from the adrenal cortex that typically presents late in the form of a large mass [3] with an average size of around 13 cm [4]. This can be explained by the fact that approximately 65-85% of ACCs in adults are nonfunctioning leading to late consultations which are usually motivated by palpable mass or symptoms related to mass effect [5]. When masses arising in the region of the adrenal become large as in our case, it can be difficult to determine their origin [2]. Other diagnoses as exophytic hepatic mass may be raised particularly since enhancement features of ACCs in imaging modalities are nonspecific [2]. In fact, these are the large size and the heterogeneity of the tumor which are more reliable indicators of the diagnosis than are washout values [2]. If the diagnosis remains uncertain after imaging, as was the case for our patient, percutaneous biopsy can determine the adrenal origin of the tumor but without specifying its malignant or benign nature [6]. In the absence of distant metastasis and/or of tumor thrombus in the vena cava, the diagnosis of malignancy is based on the pathological examination after tumor removal [1]. Indeed, the Weiss criteria are the most commonly used histopathologic system to determine adrenocortical malignancy [1, 6]. Other prognostic factors have been described for ACCs as complete resection, mitotic count and Ki67 [1, 4, 7]. Furthermore, adjuvant Mitotane would be associated with improved recurrence-free survival in localized ACC [8]. In our patient, Mitotane was used for 3 years and he had recurrence after 6 years of follow-up. This underlines the importance of curative resection even in case of very large tumor, the interest of Mitotane as an adjuvant therapy and the long term follow up to diagnosis recurrence at an early stage.

Authors have no conflicts of interest or financial ties to disclose.

© 2021 Mohamed Ali. This is an open-access article distributed under the terms of the Creative Commons Attribution License, which permits unrestricted use, distribution, and reproduction in any medium, provided the original author and source are credited. Hosting by Science Repository.
DOI: 10.31487/j.ACO.2019.01.02

Figure 2: A. MRI showed on axial T2-weighted sequence with fat suppression, a large mass (white arrow) arising from segments 5, 6 and 7 of the liver. B. Coronal MRI slice showed a large mass extending from the right kidney to the diaphragm. The inferior vena cava (asterisk) was displaced to the left but remained permeable.