A gastro-splenic fistula is a rare complication of lymphoma, the etiology of which is poorly understood due to the narrow spectrum of cases. Additional case reports of this complication allow for increased understanding to facilitate treatment planning. This case report provides our detailed patient scenario and surgical approach to a gastro-splenic fistula in the setting of large B-cell lymphoma and compares this approach to similar cases provided in the literature review.

A gastro-splenic fistula (GSF) is usually a direct manifestation of lymphoma, specifically splenic lymphoma or gastric large cell lymphoma [1, 2]. While fistula formation between a hollow viscera and solid organ is rare, bleeding that may occur has life-threatening potential [3]. According to the literature, 26 relevant cases have linked GSF to lymphomas. Specifically, data shows that GSF occurs mainly in diffuse, large B-Cell lymphoma, in addition to diffuse histiocytic lymphoma, Hodgkin’s lymphoma, and NK/T-Cell lymphoma [4]. The characteristics of GSF occurring in lymphoma patients are elusive due to the extreme infrequency; this case report and review of the literature aims to provide insight on this topic. We present a case of a gastro-splenic fistula as a result of large B-cell lymphoma that was corrected through laparoscopic sleeve gastrectomy followed shortly by postoperative chemotherapy.

The patient is a 69-year-old male who presented with 2 months of anorexia, early satiety, and a 25-pound weight loss. He additionally complained of drenching night sweats over a one-month period of time. His past medical history was significant for diabetes, hypertension, hypercholesterolemia, and coronary artery disease for which he had undergone coronary artery bypass grafting a year prior to presentation. His primary care physician had initially referred him for EGD and colonoscopy, both of which were negative for any obvious pathology. Subsequent CT scan of the abdomen and pelvis showed a bulky, splenic mass measuring 12 x12 x11 cm with extrinsic compression on the gastric body and fundus, and surrounding lymphadenopathy in the upper abdomen and lower thorax, suspicious for lymphoma (Figure 1). Abnormal laboratory studies were significant for elevated LDH and anemia. 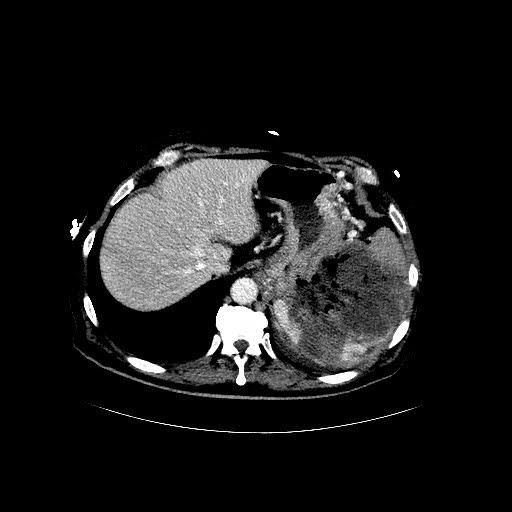 Figures 1: CT scan of the abdomen and pelvis showing a bulky, splenic mass measuring 12 x12 x11 cm with extrinsic compression on the gastric body and fundus, and surrounding lymphadenopathy in the upper abdomen and lower thorax. The patient was referred for urgent interventional radiology biopsy of the enlarged abdominal lymph nodes.

However, prior to this procedure, the patient returned to clinic with increasing confusion, altered mental status, and a new left foot drop. As a result, he was hospitalized for inpatient cancer workup. IR biopsy revealed diffuse, large B-cell lymphoma. The altered mental status workup resulted in a lumbar puncture, which revealed 3 nucleated cells and flow cytometry positive for kappa restricted CD 10- positive B-cell lymphoma. The patient was immediately started on intrathecal methotrexate and cytarabine. Repeat CT now showed fistulous formation between the stomach and splenic hilar mass (Figure 2). Repeat EGD revealed a large splenic mass with erosion into the stomach, including gastric mucosal ulceration (Figure 3) and necrotic material seen within the fistulous cavity (Figure 4). Surgery was consulted for possible splenectomy and gastrectomy. 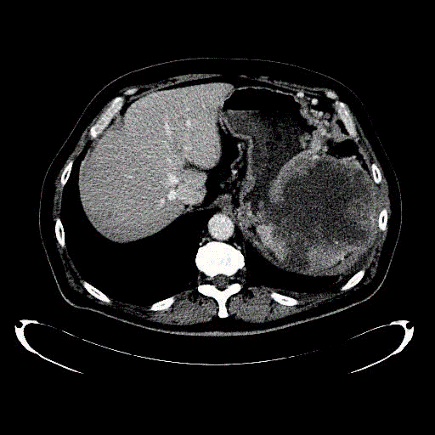 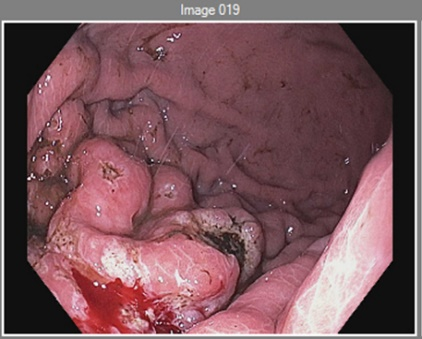 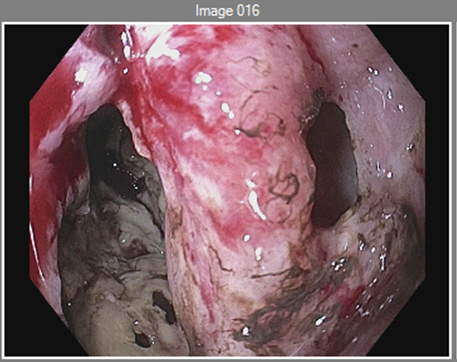 After carefully considering the perioperative risks, weighed against the risks of starting chemotherapy with a resultant defect in the greater curve of the stomach after positive response to chemotherapy, and a multi-disciplinary discussion, the decision was made to attempt a laparoscopic splenectomy, partial gastrectomy, and possible distal pancreatectomy. Upon entry into the abdominal cavity and placement of a liver retractor, the lesser sac was entered approximately 5 centimeters proximal to the pylorus. Large collateral vessels were noted, and the planes of dissection were thickened with dense perigastric lymphoma, fibrotic tissue and enlarged lymph nodes. The greater curve of the stomach could not be fully mobilized due to the large necrotic mass approximately halfway up the greater curve (Figure 5). The proximal greater curve was mobilized, and short gastric vessels were taken down distally to the large fistulous cavity. A plane was cleared along the posterior aspect of the stomach and greater curve towards the left crus. The mid-greater curvature was incompletely devascularized due to the dense adhesions and inflammatory phlegmon between the spleen and greater curve. Further attempts were made to mobilize the spleen, but the tissue planes at the inferior splenic pole could not be clearly identified due to the burden of lymphoma tissue. Large collateral vessels coursed throughout these tissues, making anatomic identification and dissection extraordinarily difficult. The splenic hilum could not be clearly identified due to the large mass effect extending to the stomach, as well as the fibrosis of the tissues in this area. 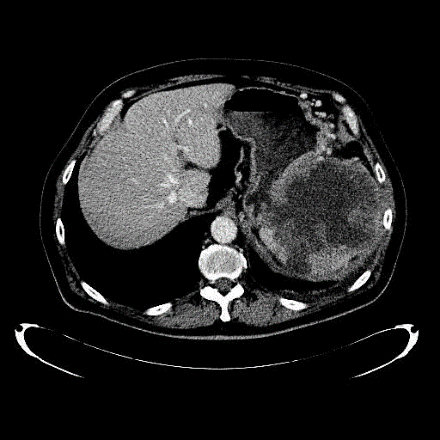 The decision was made to perform a modified sleeve gastrectomy in an effort to isolate the fistulous tract from the remaining medial stomach and maintain enteric integrity. The fistulous portion of now-excluded stomach was then removed off the splenic mass in a piecemeal fashion using ultrasonic sheers. The specimen was then placed in an endocatch bag and removed from the abdomen. Given the intended early chemotherapy during the postoperative period and concomitant risks of staple line disruption, the area was widely drained, and the spleen left in place along with the hilar mass. Estimated blood loss was 750 milliliters and the patient received 2 units of packed red blood cells intra-operatively. Upon completion of the case, the patient was transferred to the recovery room with three 24 F Blake drains and an Abramson drain of the splenic hilum.

The patient had a relatively uneventful post-operative course and was discharged on post-operative day 5. He began systemic chemotherapy on post-op day 10, and drains were narrowed to 2. Bloody drain output 7 days after initiating chemotherapy resulted in re hospitalization and transfusion without further intervention. He was seen on post-operative day 32 in surgery clinic, where he was tolerating a regular diet and regaining his energy after 2 rounds of systemic chemotherapy. On postoperative day 34, the patient reported enteric contents visible in his 2 remaining drains. He was immediately re hospitalized, and a CT scan revealed a gastric staple line disruption (Figure 6). A nasojejunal feeding tube was placed past the gastric staple-line disruption and enteric feeds distally were initiated. The patient went on to complete his chemotherapy course and recover with a drain-controlled gastrocutaneous fistula. The patient is currently 7.5 months postoperative and radiographically in remission from the lymphoma (Figure 7) and an intact gastric lumen (Figure 8). 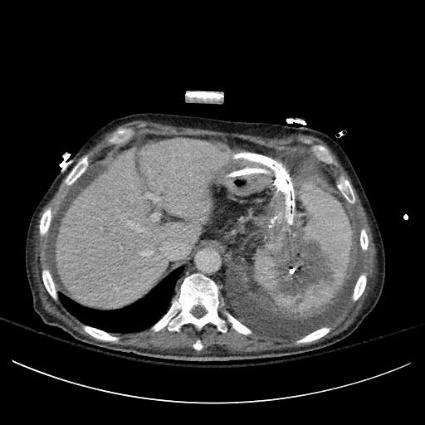 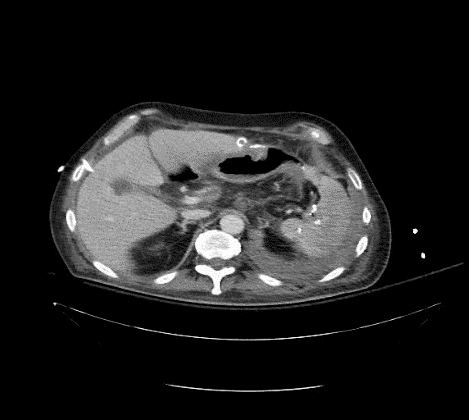 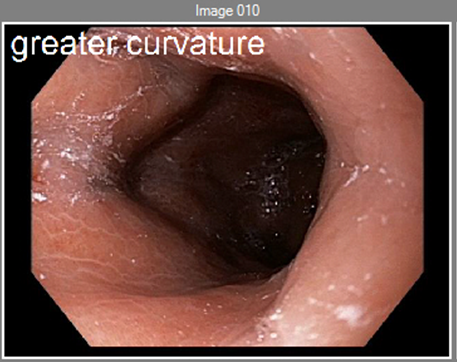 Twenty-six cases of GSF occurring in lymphomas have been recorded in the MEDLINE database, with 23 occurring in diffuse, large B-cell lymphoma (Table 1). Those 23 patients consisted of 19 males ranging from ages 21-76 and 4 females ranging from ages 43-66 [4]. The chart below provides profiles of those 23 patients [4, 5]. Symptoms including splenomegaly and weight loss, both prevalent in the majority of those cases, were 2 symptoms that our patient initially presented with. Surgical resection was performed on the 23 patients to prevent the possibility of erosion into the splenic vasculature [4, 5]. The prevalent surgical approach for these cases was a partial gastrectomy with a splenectomy as needed/feasible. For larger tumors, a near-total gastrectomy and splenectomy was preformed when possible.

In our case, although the initial surgical effort to perform a laparoscopic splenectomy, partial gastrectomy, and possible distal pancreatectomy was not able to be accomplished according to plan, a laparoscopic sleeve gastrectomy minimized the septic risk of systemic chemotherapy, which ultimately proved successful in treating the patient and achieving remission. Early initiation of chemotherapy on postoperative day 10 likely contributed to a disruption of the gastric staple line, which impaired enteric feeds and subsequent nutrition. Postponing systemic chemotherapy may have prevented this disruption and resulted in the procedure having no complications but would have allowed further progression of disease during this period.

Table 1: Includes information on 23 additional cases of gastro-splenic fistula in diffuse B-cell lymphoma mentioned in the Patients and Methods.

© 2019 Brian R. Smith. This is an open-access article distributed under the terms of the Creative Commons Attribution License, which permits unrestricted use, distribution, and reproduction in any medium, provided the original author and source are credited. Hosting by Science Repository. All rights reserved.
DOI: 10.31487/j.CRSS.2020.01.10

Table 1: Includes information on 23 additional cases of gastro-splenic fistula in diffuse B-cell lymphoma mentioned in the Patients and Methods.

Figures 1: CT scan of the abdomen and pelvis showing a bulky, splenic mass measuring 12 x12 x11 cm with extrinsic compression on the gastric body and fundus, and surrounding lymphadenopathy in the upper abdomen and lower thorax. The patient was referred for urgent interventional radiology biopsy of the enlarged abdominal lymph nodes.