An 85-year-old male presented to the emergency with recurrent acute vomiting, abdominal distension and long standing constipation. Background history was significant for a large, incarcerated inguinoscrotal hernia and congestive cardiac failure. Computed tomography scan showed non-dilated large bowel loops along with part of the gastric antrum and omentum in the hernial sac. He was managed conservatively with bowel rest as he refused decompression. He settled well on conservative management and was started on light diet after 48 hours with progressive upgrading of food to which he showed good tolerance. He also resumed normal bowel movements during the same time. During his admission he was managed by Cardiology for congestive cardiac failure. He was discharged home with instructions and education about findings to both patient and carers and for follow up to discuss possible endoscopy.

Inguinal hernias are the most common abdominal wall hernia accounting for about 75% of all abdominal hernias [1]. The lifetime risk for males is 27% and females 3% [2]. One of the most dangerous complications of inguinal hernias is bowel obstruction which can lead to strangulation. The rate of strangulation of groin hernias can be as high as 45% if the history of presentation is above 2 years [3]. For inguinal hernias the risk is lower at 4.5% but in terms of absolute numbers, inguinal hernias outnumber femoral hernias significantly [3]. The stomach is an unusual content of inguinal hernias and only about 65-70 cases have been reported in literature with a majority before 1980 [4]. However, there have been reported severe and life-threatening complications including rupture, strangulation with ischemia and bleeding [1]. Therefore, it is a rare but important consideration in patients with long-standing hernias presenting with upper gastrointestinal symptoms.

An 85-year-old male, poorly mobile nursing home resident presented to the Emergency with complaints of recurrent vomiting and upper abdominal pain over the past 2 days. His past history was significant for a long-standing huge incarcerated inguinoscrotal hernia, hypercholesterolemia, hypertension, congestive cardiac failure and constipation off and on for years. Vomiting was not related to food intake and was semi-projectile. There was no history of hematemesis, malena or weight loss. The patient usually had excellent appetite and that decreased 2 days before his presentation to the hospital. There was no history of the hernia becoming painful or any sudden increase in its size. It was uncomfortable and at times felt like it became tenser, however significant surgical history could not be attributed to the presentation of the hernia. There was no previous abdominal surgery, but he was moderately obese. He had previous episodes of similar symptoms over the past few months; however, they were all self-limiting according to the patient and nursing home records. There was no history of fever or obstipation. He had last opened his bowels 3 days before presentation.

Examination revealed a distended and tympanotic upper abdomen with mild tenderness over the lower abdomen and a huge incarcerated inguinal hernia, without signs of peritonism. There were milder symptoms in the lower abdomen where the distension was also less as compared to the upper abdomen. The hernia was incarcerated and reached below the right mid-thigh but was not tender to palpation. There were sluggish bowel sounds and similar sounds on auscultating the hernia. There were no signs of sepsis and he had a BP of 130/76 with a pulse of 106 and physical signs of dehydration. Digital rectal examination revealed stools in the rectum. An initial diagnosis of upper gastro-intestinal obstruction was made on his history and findings.

CT abdomen revealed a large inguino-scrotal hernia containing non-dilated large bowel loops along with the inferior mesenteric artery and the lower part of a dilated and distorted stomach with omentum (Figures 1 & 2). The dependent portion of the stomach was fluid filled (Figure 3).There was a small hernia on the left side containing fat and right-sided renal cysts. The small bowel was not distended. There was no evidence of ischemia. There was faecal loading of the colon with air in the rectum. There was calcification of abdominal vasculature and the bladder had been pushed away from the midline. The heart showed mild cardiomegaly. He also had moderate osteoporosis. He had some mild derangement of his electrolytes but was corrected before discharge. Chest X-ray showed no gas under the diaphragm and findings in keeping with CCF (Figure 4). His haematological and biochemical investigations did not reveal a significant electrolyte abnormality and his BNP was at baseline. 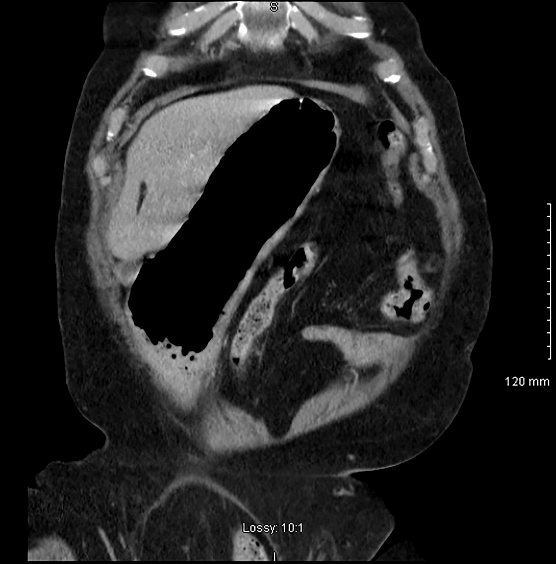 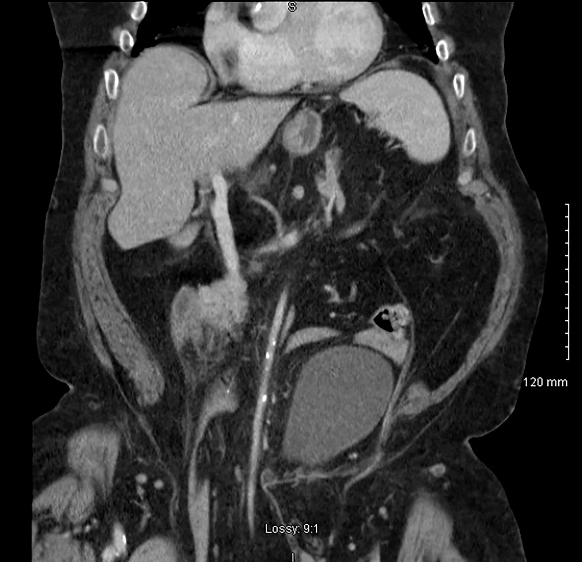 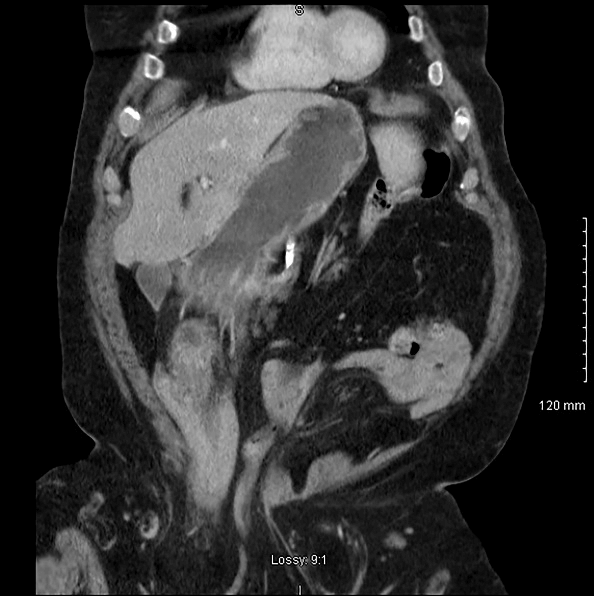 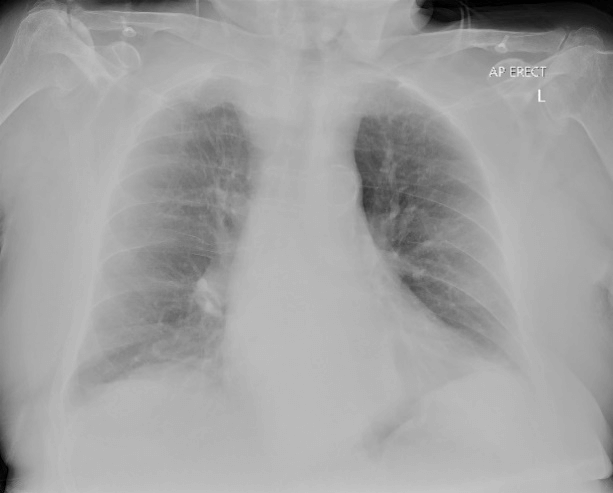 Based on the physical examination and radiological findings the diagnosis of gastric outlet obstruction was made. The non-dilated small and large bowel with the presence of air and fecal matter in the colon were indicative of GOO rather than bowel obstruction. The presence of the antral portion of the stomach in the sac with omentum, along with its distended and distorted appearance also gave evidence to the level of obstruction being the gastric antrum or pylorus. A large portion of the large bowel was in the sac, making the non-uniform distribution of abdominal distension.

He was managed along lines of upper gastro-intestinal obstruction with fluid resuscitation and active intake/output monitoring and electrolyte correction; however, patient refused nasogastric intubation and catheterisation. Thromboembolic prophylaxis was started, and physiotherapy initiated to a degree tolerated well. He was started on bowel rest with a view to re-intervene with decompressive measures if he agreed to it later. He responded well to bowel rest and fluid resuscitation in the first day. After the abdominal distension settled and he resumed bowel motions, he was started on oral fluids and then upgraded to light diet after about 48 hours.

During his time in the hospital, he showed signs of fluid overload with slightly decreased oxygen saturations and fine crepitations in the chest. This was confirmed on chest radiography. Basal natriuretic peptide was not raised significantly. Keeping in mind his past medical history, he was started on diuretics to help for fluid overload and off-load his right heart. He responded well and had a rapid return to baseline. Further medication was not altered.

Further in-hospital stay was uneventful, and he was discharged with education and advice at his baseline condition. Further follow up and endoscopy was left at his discretion as he was not open to the idea of endoscopy or a return to the out-patient clinic.

Management of inguinal hernias has changed considerably after the 1980s with the recognition of the need for early surgery and the advent of better techniques and materials for repair. However, there is a subset of patients with large inguinoscrotal hernias where either patient condition or logistics restrict the intervention offered. These patients are often disadvantaged by social conditions as well. There have been very few case reports in the last 40 years where the contents of an inguinal hernia contained the stomach. An approximate number of 60 cases before 1980 has been frequently cited in literature [1, 4]. The descent of the stomach into the inguinal hernia has no clear pathogenesis. The most commonly held beliefs include traction from omental and bowel weight, gravitating the stomach towards the dependant hernia sac [5, 6].

Also reported is the role of chronic obstructive pulmonary disease in pushing the stomach towards the inguinal region [7]. One of the most devastating complications of inguinal hernia is strangulation of the contained viscus. There have been very few cases of gastric strangulation and rupture [1]. A case in 2012 reported gastric ischemia secondary to distention after incarceration in an inguinoscrotal hernia [8]. The case mentioned here settled on decompression therapy. The presentation of gastric involvement in an inguinal hernia varies considerably but must be included in part of the differential diagnosis in the setting of a long-standing inguinal hernia. Our patient did not require any surgical intervention and settled well with conservative therapy. However, surgical intervention in most cases is advised and recommended especially in the face of ongoing clinical deterioration.

i. Long-standing inguinal hernias may contain the stomach.
ii. In the presence of GOO symptoms in such patients, it must be a part of the differential diagnosis.
iii. Early surgical intervention is recommended with the urgency directed by the clinical picture.

© 2019 Naveed Abbas. This is an open-access article distributed under the terms of the Creative Commons Attribution License, which permits unrestricted use, distribution, and reproduction in any medium, provided the original author and source are credited. Hosting by Science Repository. All rights reserved.
DOI: 10.31487/j.AJSCR.2020.02.09