The gallbladder volvulus (GBV) is a rare condition which was first reported by Wendell in 1898 [1]. Since then around 500 cases have been reported [2]. Gallbladder volvulus can occur in all age groups, although it is most commonly seen in patients between the sixth and eighth decades of life [2, 3]. The occurrence ratio between women and men is approximately 3:1 [3, 4]. Despite progress in radiologic imaging diagnosis, it is still not easy to obtain a precise preoperative diagnosis of gallbladder torsion. In previous reports, only 9.8% of all gallbladder torsion cases were diagnosed preoperatively [5]. The aim of this report is to present a rare case of a gallbladder volvulus which was diagnosed by means of computer tomography (CT) scan.

A 94-year-old Caucasian female was admitted to Surgical Emergency Unit from nursing home with sudden onset of right upper quadrant (RUQ) pain refractory to simple analgesia. On admission she appeared in significant pain but was haemodynamically stable. Her abdominal examination revealed substantial tenderness in RUQ and epigastric area, Murphy sign was positive. Haemotological and biochemical investigations revealed moderate leukocytosis with white cell count (WCC) 13.26 x 109, high haemoglobin level 155 g/L, lactate 3.3 mmol/L, normal C-reactive protein, renal and liver function tests (LFT’s). Her past medical history was significant for advanced Alzheimer’s disease, cholelithiasis, diverticulosis and hypertension. The patient had a history of common bile duct (CBD) stones and underwent Endoscopic Retrograde Cholangiopancreatography (ERCP) and CBD stent insertion twenty five months prior to this admission. On the day of admission she underwent CT scan which showed that the gallbladder was markedly distended and lying outside its normal anatomical fossa, horizontally across the upper abdomen. It appeared to be rotated around the axis of the cystic duct and artery (Figure 1). There was patent biliary stent in situ with pneumobilia. There was no evidence of gallbladder calculi. Previous studies demonstrated relatively large gallbladder which may have contributed to torsion (Figure 2). The appearance was consistent with GBV. Unfortunately, due to advanced dementia after discussion with her next of kin, it was decided that the surgery would not be in the patient’s best interest and therefore she was put on end of life care pathway and passed away shortly.

GBV is an acute condition which occurs when the gallbladder twists on its elongated mesentery along the axis of the cystic duct and artery. The gallbladder becomes more predisposed to undergo torsion with aging, presumably due to loss of visceral fat and elasticity of internal organs. There have been reported several risk factors associated with GBV including spinal deformities such as kyphoscoliosis, forceful peristaltic movements of surrounding organs, adhesions, atherosclerosis of the cystic artery and sigmoid volvulus [4, 5]. The role of gallstones is debatable as they are present in only 20-33% of patients with GBV [5, 6]. In our case the gallbladder did not contain calculi on the last scan. The GBV can be classified into complete and incomplete forms. In complete torsion, gallbladder undergoes rotation greater than 180°, whereas in incomplete, the rotation is less than 180° [7]. There are also two congenital types of free-floating gallbladders according to Gross classification [8]. Type 1 is described as an attachment of the gallbladder and cystic duct to the inferior surface of the liver with a mesentery whereas type 2 is an attachment of only the cystic duct to the liver. 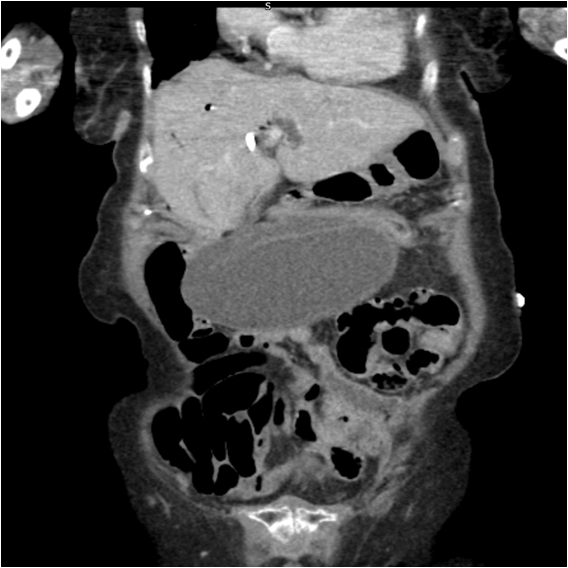 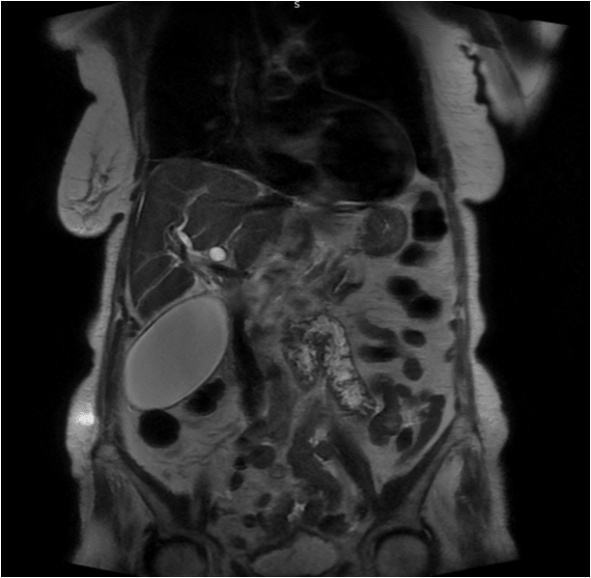 Preoperative diagnosis of GBV remains difficult because the symptoms and signs are analogous to those of an acute cholecystitis [7]. Blood tests are usually non-specific. LFT’s typically remain normal because CBD is usually non-obstructed [6, 7]. Ultrasonography (US) and CT scan are the primary imaging approaches normally used for the diagnosis. On US there could be three features which are suggestive of gallbladder torsion: a diffusely thickened and hypoechoic gallbladder wall, a floating gallbladder, in which the major part of the organ is not adhered to the liver bed and a conical structure at the gallbladder neck, consisting of multiple linear echoes converging toward the tip of the “cone” [7]. CT and magnetic resonance cholangiopancreatography (MRCP) scan can reveal an abnormal anatomical position and "floating gallbladder" often with a gallbladder wall thickening and lack of blood flow to the gallbladder suggestive of gallbladder ischemia [6, 7]. Early diagnosis of GBV is crucial in preventing life-threatening complications, such as gallbladder gangrene and perforation causing bilious peritonitis. Laparoscopic cholecystectomy is the most appropriate treatment for confirmed or highly suspected GBV which renders high success rate, reduced incidence of complications and faster postoperative recovery [5, 7]. Unfortunately, in our case the patient was not fit to undergo operation.

© 2021 Tomas Urbonas. This is an open-access article distributed under the terms of the Creative Commons Attribution License, which permits unrestricted use, distribution, and reproduction in any medium, provided the original author and source are credited. Hosting by Science Repository. All rights reserved.
DOI: 10.31487/j.RDI.2019.02.04