The term Munchausen syndrome is used to describe a situation where a person inflicts an illness or injury on self. Munchausen syndrome by proxy is when a person fabricates an illness on behalf of another. We report the case of an injection drug user admitted to the hospital for a spinal epidural abscess which was drained, treated with antibiotics and doing well, suddenly becoming very sick and febrile on day 17. The blood cultures grew a total of 12 organisms including 2 fungi. Someone who visited the patient in the hospital around this time was suspected to have injected a solution of drugs brought from home directly into the patient’s intravenous line used to administer antibiotics resulting in a polymicrobial bacteremia/fungemia. Presence of Lactobacilli in one blood culture raised the suspicion that the girl friend who was also a drug user, may have been responsible as Lactobacilli are more frequently found in hands of females. We caution physicians and nurses to be vigilant when handling injection drug users and other drug abusers admitted to hospital. Materials brought to the patient’s room from outside must be screened. New onset of unexpected symptoms should alert caregivers of the possibility of such abuse.

Baron Hieronymus Carl Friedrich Freiherr von Münchhausen (1720-1797) was a famous eighteenth-century teller of extravagant stories. In 1785, Rudolph Erich Raspe anonymously published the first book-form edition of Münchhausen’s Tales, and a translation was made available by Gottfried August Bürger the following year. Since that time, these adventures remained a best seller, and the name of the Baron was twice referred to in psychiatric terminology: “Munchausen syndrome” coined by Richard Asher in 1951 and “Munchausen syndrome by proxy” coined by Roy Meadow in 1977 [1-3]. The term Munchausen syndrome is used to describe a situation where a person inflicts an illness or injury on self [2].

The terms Munchausen syndrome by proxy and Polle syndrome have been used to describe the situation in which one person persistently fabricates illness on behalf of another (usually a mother on behalf of a child or a caregiver).

The term Polle syndrome was coined with the mistaken belief that the name of a daughter borne by wife of the baron, whom he disowned was Polle. Polle happened to be the town of mother’s origin and not the name of the child. Hence Strassburg and Peuckert (1984) and Meadow and Lennert (1984) suggested discontinuation of this term [4, 5]. Here we report a case where a visitor to the hospital inflicted an illness in a hospitalized injection drug user, treated for a thoracic 1-4 spinal epidural abscess (Figure 1), who was doing well, resulting in serious polymicrobial bacteremia 17 days after admission, as shown in (Table 1) [6]. 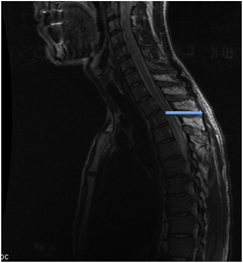 A 30-year-old injection drug user was admitted with lower extremity weakness and back pain for 3 days. He was a cigarette smoker. His girlfriend was also a drug user. The patient was known to be non-compliant in the past. The temperature at the time of arrival was 101.4º F (38.56º C), white blood cell count (WBC) 22,060 (NL 4500-11,000 per microliter), erythrocyte sedimentation rate (ESR) 51 (NL 0-22 mm/hr), C-reactive protein (CRP) > 90 (NL 0.3-10 mg/L), Lactic acid 1.0 (NL 0.5-2-2 mmol/L), urine drug screen positive for amphetamine and tetra hydro cannabinol and 2 blood cultures were negative. Magnetic resonance imaging revealed an epidural abscess involving vertebrae T1-T4 (Figure 1). His Hepatitis C antibody test was positive and the antibodies for human immunodeficiency virus was negative. He was started on intravenous vancomycin 1 gram twice a day.

Next day he had a laminectomy and drainage of spinal epidural abscess. One out of 2 blood cultures (BC) drawn and the abscess fluid grew methicillin-susceptible Staphylococcus aureus. The WBC count was 19,640 and CRP remained elevated > 90. The treatment was changed to intravenous cefazolin 1 gram three times a day. On day 3 multiple blood cultures drawn were reported negative. WBC count decreased to 12,020. On day 8 WBC count was normal (8340) and the fever gradually resolved. He was doing well upto day 16.

On day 17 he became febrile (Table 2). Blood cultures drawn grew 8 organisms consisting of 6 environmental bacteria and 2 species of Candida (Table 1). The treatment was changed to cefepime pending susceptibility reports. On day 19 WBC count was 12,430. Blood cultures repeated on day 21 had 4 new organisms (Table 1). The WBC count was 10,670 and ESR 95. The antibiotics were changed to cefazolin and trimethoprim/sulfamethoxazole (TMP/SMX). On day 26 the patient left the hospital against medical advice. However, he continued oral TMP/SMX at home. On day 35 the patient got re-admitted. His temperature was 97.7º F (36.5º C), WBC 7850, ESR 36, CRP 3.6 and 2 blood cultures had no growth showing resolution of infections. On day 37 he eloped from the hospital and did not return telephone calls.

The most common bacteria in injection drug users are Staphylococcus aureus and streptococci and Pseudomonas aeruginosa and Staphylococcus aureus in spine infections [7-9]. Unusual environmental bacteria (Commamonas, Chryseobacterium and Delftia) have been reported in polymicrobial infections [7]. There are reports of Candida albicans, Stenotrophomonas maltophilia and alpha streptococci in cases of Munchausen syndrome by proxy [10]. Six of the organisms found in our patient were reported in a 23-year-old female with Munchausen syndrome [10]. Candidemia has been reported in drug users [11].

Deliberately inflicted bacteremia is rare. Halter (1992) reported a case of Munchausen syndrome in an intravenous drug abuser who developed right and left heart endocarditis following injection of feces [12]. In our patient, although the injection of contaminated drugs into the intravenous line was deliberate, the offender probably did not anticipate the resulting infection. Hence, we report this case as a variant of Munchausen syndrome by proxy. The presence of multiple environmental and skin microbes in blood cultures was suggestive of deliberate injection of contaminated material. Lactobacilli have been isolated more frequently from hands of females and the likely source of Lactobacilli could be the hands of a female [13]. The girlfriend’s visit coincided with the onset of patient’s symptoms. Most reported cases of polymicrobial bacteremia have been associated with up to 5-7 organisms [14, 15]. Twelve new organisms in blood cultures of a hospitalized patient many days after admission has never been reported (Table 1).

In addicted patients, craving could be intense, and they may use extreme measures to obtain drugs. Most likely, the patient requested a visitor to bring the drugs. The visitor or the patient himself may have injected the intravenous line. Materials brought by visitors to hospital rooms of drug addicts must be screened. In healthy young individuals, most environmental organisms do not cause invasive infections. In spite of 13 microbes (1 on admission + 12 subsequently) in blood cultures, the patient made a good recovery.

This case was presented at the American college of academic international medicine, 2019 annual meeting, Philadelphia, USA. This case was discovered during a retrospective study of 317 Stenotrophomonas infections during a 3-year period under the institutional review board exempt study 2018-113.

© 2019 Don Walter Kannangara. This is an open-access article distributed under the terms of the Creative Commons Attribution License, which permits unrestricted use, distribution, and reproduction in any medium, provided the original author and source are credited. Hosting by Science Repository. All rights reserved.
DOI: 10.31487/j.DDA.2020.01.05