Gliomas are the most frequent primary brain tumors and include a variety of different histological tumor types and malignancy grades. Histopathology is the gold standard for the typing and grading of gliomas. However, histological classification of glioma is associated with significant inter-observer variability. Recent progress in the molecular biology of gliomas, has acknowledged various markers of prognostic and predictive significance. Most crucial, however, are those markers that are used to predict response to certain therapies, thereby directing clinicians to a particular treatment while avoiding other potentially deleterious therapies. There has been an increasing use of molecular markers in the assessment and management of gliomas. Large-scale genome-wide surveys have been used to identify new biomarkers that have been rapidly developed as diagnostic and prognostic tools [1, 2].

Recent data from a phase I clinical trial with the specific inhibitor PLX4032 in patients with metastasized BRAF V600E mutant malignant melanoma nourishes the hope that BRAF V600E mutation may become a prime target of cancer therapy in the near future. The aim of this study was to determine the KIAA1549-BRAF gene fusion in glioma and their correlation with various clinical parameters. Our results have been discussed in the light of relevant literature [3].

In this prospective study, forty-one cases of glioma were included from March 2015 to December 2018. One patient was excluded from the study due to inadequate tumor tissue. Thus total 40 cases were considered for the study. Their clinical details in form of age, sex, duration of symptom, clinical features, radiological findings and operative details were noted. The slides were reviewed, and the histological diagnosis was established. Representative sections with tumor area were selected for RNA extraction from tissues using the RNeasy mini kit (QIAGEN), reverse transcribed, and amplified by PCR using BRAF and KIAA1549 primers. RT-PCR was performed with 40 cycles of denaturation for 50s at 94°C, annealing for 45s at 58°C and extension for 50 s at 72°C. PCR products were visualized by 8% acrylamide-gel electrophoresis, staining with gel red. The results of fusion products were correlated with clinico-pathological parameters. Statistical analysis of data was done using SPSS software version 13.0.

Out of forty study cases, there were 24 males and 16 females. Age range was 8-75 years with mean age of 30.4 years. There were 11 pediatric cases (age below 16 years) and 29 adult cases (age above 16 years). The most common clinical feature was seizure (n=12) and cerebellar signs (n=7). Most common location of glioma was frontal lobe (n=12) followed by cerebellum (n=7) and temporal lobe (n=7). Glioma was having contrast enhancement (n=38), and cystic degeneration (n=18). Surgical intervention in form of near total tumor excision (n=12), gross total tumor excision (n=25), tumor decompression (n=2) and tumor biopsy (n=1) was performed. The most common histopathology was astrocytic tumors (n=34) followed by oligodendroglial tumors (n=3) and ependymal tumor (n=3). The most common astrocytic tumor was fibrillary astrocytoma (n=11), pilocytic astrocytoma (n=10), glioblastoma (n=8) followed by anaplastic astrocytoma (n=5). Overall, the most common WHO grade of tumor was grade II (n=17), followed by grade I (n=10) and grade IV (n=8). Table 1 summarizes the details of our cases.

Table 5: Association of BRAF gene fusion with WHO grade of glioma. 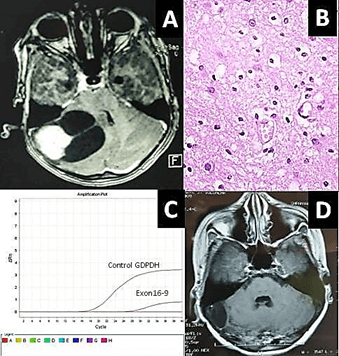 BRAF, a proto-oncogene, located in the chromosome 7 (7q34), is a member of RAF (ras activating factor) family of proteins which includes ARAF, BRAF and CRAF. These proteins have serine-threonine kinase domain and once they are activated by ras proteins, phosphorylate the proteins of MAPK/ERK pathway. This pathway in turn regulates cellular differentiation, proliferation, and migration, and is thought to contribute to the tumorigenesis of a variety of human malignancies [1-4]. Approximately, 7% of all cancers show mutations in BRAF whereas those occurring in ARAF and CRAF are rare. BRAF has been identified as a highly ‘druggable’ target protein (i.e., capable of being bound by drug-like compounds) in melanomas and analogous clinical trials in gliomas has already begun [2]. There are two ways of turning on BRAF gene in gliomas. The most frequent BRAF alteration in gliomas is tandem or focal duplication/fusion. This tandem duplication on 7q34 occurs as result of fusion between a gene BRAF and another gene of unknown function which lies centromeric to BRAF. This fusion oncogene has loss of the ras-binding domain on BRAF [5, 6]. The end result is to delete the N-terminal ras-binding regulatory domain, producing constitutive BRAF (or CRAF) activity [5, 7-14]. The most common tumor related fusion occurs in BRAF followed by CRAF and not at all in ARAF.

In addition to histological features and site, age also affects the likelihood of a BRAF fusion being present. The occurrence of BRAF fusions appears to decline with increase in patient’s age, from about 80% in the first decade to 50% in the second decade, with less than 10% of PAs in patient over 40 years [20]. We also noted that KIAA1549-BRAF fusion was higher in children (72%; 8/11) as compared to adults (10%; 3/29) and this difference was statistically significant. Another way to turn on BRAF is valine to glutamate (V600E) point mutation in exon 15, less commonly in exon 11 at 600 residues, which activates MEK without first needing upstream ras phosphorylation leading to constitutive BRAF activity. BRAF V600E exists in diverse tumors, including melanocytic nevi, melanoma, colon cancer, and papillary thyroid cancer. BRAF mutation has been reported in 10-15% of grade II-IV diffusely infiltrative pediatric astrocytomas, but in less than 2% of comparable adult gliomas [12, 21-25]. In both children and adults, less than 10% of all PAs have BRAF mutation, and it is present in only 2% of cerebellar PA [5, 6, 8, 15-18, 21, 22]. Rarely, concomitant mutation and BRAF fusion has also been reported in the same tumor [8, 26]. V600E mutation is more associated with tumors that come in the differential diagnosis of PAs such as 20-25% of pediatric and adult gangliogliomas and 60-80% of pleomorphic xanthoastrocytomas in both age groups [8, 17, 21, 25, 26]. We did not study BRAF mutation in our study.

Thus, over 75% of sporadic PAs have some sort of BRAF alteration, compared to about 40-50% of all other gliomas that come in the differential diagnosis of PA [13, 18, 26-28]. We also noted KIAA1549-BRAF fusion in one of our frontal oligodendroglioma case. Low grade gliomas under microscopy from a diagnostics standpoint if show a BRAF fusion is suggestive of a PA, but whether it can be used to definitively prove PA is still unclear.

In contrast, detecting a V600E mutation in low grade gliomas is more associated with other tumors in the PA differential like ganglioglioma, pleomorphic xanthoastrocytoma or diffuse fibrillary astrocytoma, but again cannot be used to definitively prove one type of tumor versus another. In one patient of our series, the radiological and intraoperative impression was of cerebellar pilocytic astrocytoma. The histopathology was suggestive of diffuse fibrillary astrocytoma. As radiological and intraoperative findings were suggestive of pilocytic astrocytoma, hence, BRAF fusion by RT-PCR was applied which was positive. Thus, the final diagnosis of pilocytic astrocytoma was given. This shows the importance of BRAF fusion test in differentiating PA from low grade glioma.

Some of the studies have shown that regardless of the histology, presence of a BRAF fusion is associative with favourable prognosis [8, 26, 29, 30]. However, few contradict this finding by reporting no association with progression-free survival independent of location [6, 31]. From an outcome-based perspective, recent work shows that supratentorial low-grade pediatric gliomas with BRAF fusion usually behave as typical grade I PAs irrespective of histology and status of surgery i.e., whether they are completely resected or not; whereas PAs without BRAF fusion are more likely to behave like grade II diffuse astrocytomas [9]. Similar trend was seen in PAs in the cerebellum [16]. In another study, 118 pediatric WHO grade II diffuse astrocytomas and oligodendrogliomas, 6 had tumor in posterior fossa had BRAF fusion and all 6 were extremely indolent despite their grade II microscopic appearance [6]. However, two studies that included pediatric low-grade gliomas from both the supratentorium and posterior fossa did not show BRAF fusion to be an independent prognostic variable on multivariate analysis [26, 31]. There is not yet a consensus on the prognostic impact of BRAF fusion in gliomas. It appears to be at least a neutral biomarker, and perhaps even a favourable marker in certain contexts.

In contrast, data on BRAF V600E mutations and outcome are very sparse. Recent work comparing both types of BRAF alterations in the same cohort of pediatric low-grade gliomas suggested that there is a trend toward divergence in prognosis- i.e., BRAF fusions tend to be associated with longer progression free survival, while BRAF V600E mutations suggest shorter progression free survival [26]. Interestingly, in that same cohort neither alteration was more powerful than the presence of p16 deletion, which was a significant independent adverse prognostic marker. This makes sense because loss of p16 inhibits BRAF-induced tumor senescence [32, 33].

The potential for rapid implementation of targeted therapeutics against continuative BRAF activity fusion/mutation is higher than typical because there are already many pharmacologic inhibitors that theoretically should work on these tumors. The MEK inhibitor AZD6244 (Selumetinib) is undergoing various phase I and II trials for BRAF mutant solid tumors, including pediatric gliomas. Certainly, the experience with melanomas and PLX4032 (Vemurafenib) is reason for some optimisms [34].

The main limitation of our study is small number of cases. Further studies with large cohorts are required to validate the role of BRAF gene status in glioma patients.

In our study, overall, KIAA1549-BRAF fusion was found in 22% (9/40) cases of glioma. Childhood age, pilocytic astrocytoma histology, cerebellar location and WHO grade I tumor were significantly associated with KIAA1549-BRAF gene fusion as demonstrated in other studies.

© 2021 Awadhesh Kumar Jaiswal. This is an open-access article distributed under the terms of the Creative Commons Attribution License, which permits unrestricted use, distribution, and reproduction in any medium, provided the original author and source are credited. Hosting by Science Repository.
DOI: 10.31487/j.NNB.2021.03.02

Table 5: Association of BRAF gene fusion with WHO grade of glioma.