Background: Phlegmasia cerulean dolens (PCD) is an uncommon and severe manifestation of massive proximal venous thrombosis of the lower extremities associated with a high degree of morbidity and mortality.
Case: We describe a case of a 67-year-old gentleman with metastatic gastric neuroendocrine tumour, who developed PCD of his left lower limb. He underwent endovascular thrombectomy with thrombolysis and stent placement with good effect.
Discussion: Characterised by severe venous outflow obstruction, marked limb swelling, pain and discolouration, PCD can lead to venous gangrene, congestion with massive fluid sequestration and circulatory collapse if left untreated. Various treatment modalities were reported with varying outcomes, morbidity and mortality.
Conclusion: A multifaceted approach to PCD may be required for successful limb salvage, taking into account the risks and benefits of each treatment modality.

Phlegmasia cerulean dolens (PCD) is an acute fulminating form of deep venous thrombosis explored in French literature by Tremolieres and Veran and Gregoire [1, 2]. Characterised by acute severe pain of the lower limb and pronounced oedema, cyanosis with paraesthesia and motor weakness soon follow. Associated with venous gangrene, it may rapidly progress to circulatory collapse and death [3, 4]. Manifestations of PCD result from acute massive venous thrombosis and occlusion of major venous channels with compromised venous outflow. Various causes, along with the risks factors associated with deep vein thrombosis (DVT), have been explored; of which, malignancy was a significant risk factor present in up to 50% of patients [3, 5, 6].

Optimal management of PCD remains debatable with no large-scale randomised studies to date. The insurgence of endovascular techniques with percutaneous mechanical thrombectomy, cathether-directed thrombolysis, angioplasty and stenting offer a comparatively minimally invasive approach to open surgical thrombectomy. As such, we reviewed existing literature of PCD management and describe our multifaceted approach to our patient afflicted with PCD.

A 67-year-old gentleman presented to our institution with PCD of his left lower limb. He has an oncologic background of metastatic gastric neuroendocrine tumour -Vasoactive intestinal peptide tumour (VIPoma) on supportive management. Other significant medical history includes a previous right lower limb DVT complicated by saddle pulmonary embolism, for which he was on anticoagulation with an inserted inferior vena caval (IVC) filter. The patient has become bedridden over the course of a year and presented with acute left lower limb pain and swelling. Examination revealed an oedematous and tender left lower limb with discolouration of the foot (Figure 1). Distal pulses were poorly palpable with delayed capillary refill of 4 seconds. Proximal pulses, however, remained intact and neuromuscular function was preserved. Arterial and venous duplex ultrasonography of the left lower limb demonstrated total occlusion of the common iliac vein, extending distally to the femoral and popliteal veins with a patent arterial system. 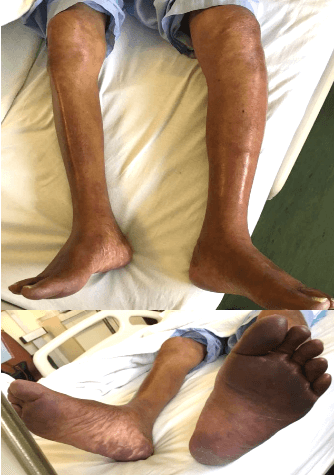 Figure 1: Phelgmasia cerulean dolens with swelling and purpura of the left lower limb. 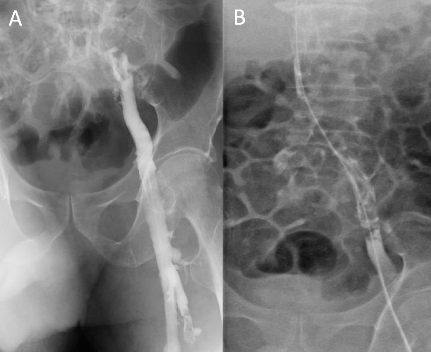 Phlegmasia cerulea dolens is a rare form of massive venous thrombosis of the lower extremities, which can lead to arrest of capillary blood flow, tissue ischemia and ultimately gangrene, resulting in limb loss and even death. Prompt diagnosis and adequate treatment is crucial for avoiding limb loss and death. The management of PCD varies and is guided by clinical severity. Primary treatment goals in PCD include restoration of venous outflow, prevention of thrombus formation and preservation of collateral circulation [7]. Although no randomized trials are available and guidelines for treatment are still not clearly documented, three therapeutic options are advocated alone or in combination: anticoagulation, thrombolytic therapy and venous thrombectomy [5].

For mild non-gangrenous forms of PCD, conservative medical treatment with bed rest, leg elevation, fluid resuscitation and anticoagulation with intravenous administration of heparin should be the initial course of therapy [8]. The purpose of rapid heparin anticoagulation aims to decrease the risk of proximal clot propagation or thromboembolism [9]. However, conservative management is associated with high failure rate and other treatment modalities of thrombus removal should be considered early in the management of PCD [10]. In relation to our case, however, PCD developed in spite of anticoagulation, necessitating surgical therapy to prevent limb loss. There are two methods of venous thrombus removal; venous thrombectomy or endovascular intervention including catheter directed thrombolysis and pharmacomechanical thrombectomy [5]. 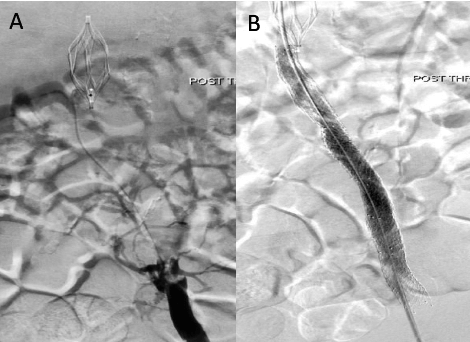 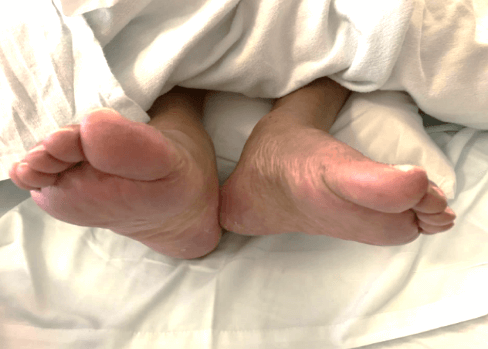 Figure 4: Appearance of a resolved phelgmasia of the left lower limb.

Thrombolysis dissolves venous thrombi and consequently minimises development of post-thrombotic syndrome. It is also advantageous in the systemic distribution of the thrombolytic agent with consequent effect on both the large and small venous channels. However, as a result of continuous drug dissemination, thrombolysis is limited in attaining optimal concentration of thrombolytic agent at the thrombus site as depicted in our patient with remnant clots despite aggressive thrombolysis. Hence, some have proposed catheter-directed thrombolysis directly into the vein with high doses of urokinase. Meanwhile, others support the use of intra-arterial low dose thrombolysis via the femoral artery, reasoning that the arterial route delivers the agent to the arterial capillaries and subsequently to the venules. The clinical advantage of catheter directed thrombolysis over systemic anticoagulation is unfortunately still questionable, as in-hospital mortality has not shown significant benefit. On the contrary, catheter-directed thrombolysis was associated with higher rates of adverse events involving higher rates of blood transfusion and intracranial haemorrhage [11]. For cases of severe PCD and/or venous gangrene, venous thrombectomy is usually performed. It allows instant decompression of venous hypertension and usually applies to patients with absolute contraindications to thrombolysis [8]. However, it is disadvantaged in its elevated risk of recurrent thrombosis and post-thrombotic syndrome [12].

Meanwhile, endovenous stenting has also gained traction as part of the multi-modality approach to DVT and PCD. While Neglen et al. illustrated the utility of endovenous stenting with high patency rates and symptom relief in those with chronic venous outflow obstruction there is a paucity of data related to stent usage for PCD. In spite of possible stent-related issues of displacement, breakage, in stent thrombosis and patency, endovenous stenting shows promise as a treatment adjunct to PCD [13]. As illustrated in our case of refractory and recurrent thrombosis in a patient who had already been on anticoagulation, a combination of percutaneous venous thrombectomy with catheter-directed thrombolysis and endovascular stenting had to be employed with satisfactory outcomes. As an uncommon and potentially devastating affliction, PCD requires further evaluation and assessment of its treatment modalities with therapy tailored to the specific needs of each patient.

Our case demonstrates that a rapid, aggressive, multi-modal approach to phlegmasia cerulea dolens should be applied for successful limb salvage and in attaining an acceptable quality of life for the patient. Prospective studies are required in establishing the best treatment option in such patients. However, pending long-term follow-up, a highly individualized approach is recommended to treat individuals afflicted with PCD.

The authors have no conflicts of interest to disclose.

© 2019 Yuxin Guo. This is an open-access article distributed under the terms of the Creative Commons Attribution License, which permits unrestricted use, distribution, and reproduction in any medium, provided the original author and source are credited. Hosting by Science Repository. All rights reserved.
DOI: 10.31487/j.AJSCR.2019.01.02

Figure 1: Phelgmasia cerulean dolens with swelling and purpura of the left lower limb.

Figure 4: Appearance of a resolved phelgmasia of the left lower limb.