Context: Postural change during anaesthesia has a complex effect on systemic and cerebral circulations.
Aim: The goal of the study was to evaluate the effects of desflurane and propofol on cerebral oxygenation during spinal surgery in the prone position.
Settings and Design: A prospective randomized double-blinded trial.
Methods and Materials: Fifty-two patients scheduled for spinal surgery were randomly allocated to propofol (n=25) and desflurane (n=27) groups. Anaesthetic agents were maintained to obtain a bispectral index of 50-55. SAP, DAP, HR, SPO2, ETCO2 and right and left rSO2 were assessed at seven-time points: supine position without oxygen administration (T1), supine position with oxygen administration (T2-baseline), intubation in the supine position (T3), just after prone positioning (T4), 10 minutes after prone positioning (T5), at the end of surgery in the prone position (T6) and at the end of anaesthesia in the supine position (T7). PCO2, PO2 and Hb partial were also recorded at T3 and T7.
Results: Demographic data, pre-oxygenation hemodynamic variables and rSO2 were comparable between the groups. There was no significant difference between groups in SAP, DAP, HR, SPO2, and ETCO2 (p=0.095, p=0.061, p=0.357, p=0.088, p=0.328 respectively). PCO2, PO2 and Hb were not significant different between groups (p=0.542, p=0.394, p=0.768 respectively). rSO2 values were not significantly different between groups. In the propofol group, right rSO2 was significantly higher at T3 (p=0.017) and significantly lower at T5 (p=0,019) and at T6 (p=0,028) compared to baseline. Left rSO2 decreased significantly from baseline at T5 (p=0.026) in the propofol group. Left and right rSO2 in the desflurane group decreased significantly from baseline at T5 (p=0.0004 and p=0.0115).
Conclusion: In the prone position, desflurane and propofol were associated with a significant decrease in rSO2 without differences between these anaesthetics.

Desflurane and propofol affect cerebral oxygenation in the same way during spinal surgery in the prone position.

The prone position is commonly utilized for procedures requiring the posterior approach to the spine [1]. However, this position may cause significant hemodynamic instability and cerebral hypoperfusion. Several perioperative complications such as brain ischaemia, spinal cord injury and visual loss after the prone position have been reported [2]. Though most of these complications are rare, familiarity with strategies for prevention can limit morbidity in prone spine surgery. Desflurane or propofol-remifentanil-based anaesthetic regimens represent modern techniques for neurosurgical anaesthesia. Nevertheless, there are potential differences related to their activity on the cerebrovascular system. The magnitude of such difference is not completely known [3].

The study was approved by the Ethical Committee of General Hospital of Thessaloniki “G. Papanikolaou” (protocol number: 21/4-1-2017) (Trial registration: European Network of Centres for Pharmacoepidemiology and Pharmacovigilance identifier: EU PAS 16641). A thorough pre-anaesthetic evaluation was done and patients with morbid obesity, allergy to study drugs, severe cerebrovascular or cardiovascular disease were excluded from the study. We informed all the patients about the study and written informed consent was obtained before the procedure.

Fifty-two patients with the American Society of Anesthesiologists (ASA) physical status I/II, scheduled for spinal surgery, were enrolled in a prospective randomized double-blinded trial. The randomization was achieved by a random number table using a sealed envelope technique. Patients were divided into two groups: propofol group (n=25) and desflurane group (n=27). Oral diazepam (5mg) was administered an hour before surgery for premedication. All patients were monitored with electrocardiogram, invasive blood pressure and pulse oximetry. The basal crystalloid infusion was started at 4 ml/kg/h right after peripheral intravenous access. After cleansing the skin of the patient’s forehead with an alcohol pad, sensors of BIS monitoring (BISTM complete-2 channel monitor, Covidien, Medtronic) and INVOS monitoring (INVOSTM 5100C Cerebral/somatic oximeter, Medtronic) were attached.

a: Based on t-test, b: based on M-W test, c: based on Chi-Square test. Data are presented as mean ± standard deviation or number (proportion, %)

Table 4: INVOS data during the procedure between groups.

Table 5: INVOS data during the procedure for each group separately. 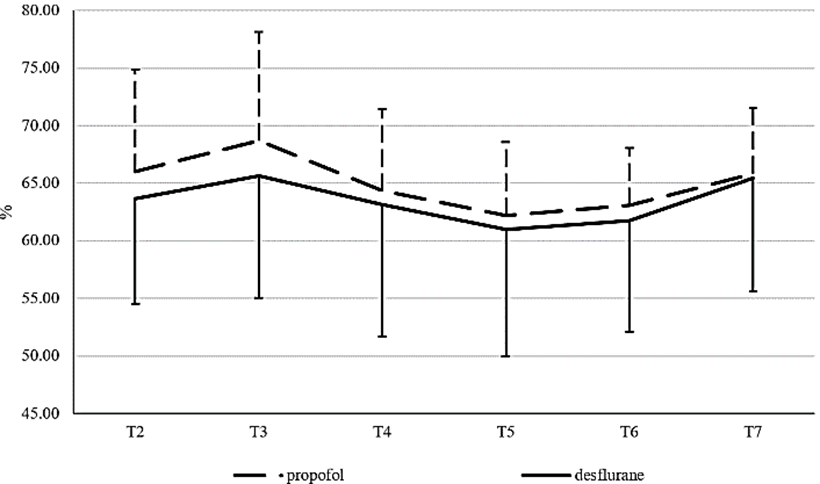 Our study indicated that when patients were turned to the prone position for spine surgery, the right and left rSO2 values were not significantly different between propofol and desflurane at equipotent concentrations in terms of BIS. Moreover, both propofol and desflurane were associated with a significant decrease in the rSO2 in the prone position compared to the supine position. Desflurane and propofol have been widely used because both anaesthetics are characterized by a rapid onset and a short duration, along with a quick post-anaesthetic recovery. However, desflurane and propofol affect cerebral oxygenation differently. Desflurane causes dose-dependent decreases in cerebrovascular resistance and cerebral metabolic rate of oxygen consumption, while propofol is associated with dose-dependent reduction of cerebral blood flow and cerebral metabolic rate, which results in a decrease of intracranial pressure [7, 8]. Compared to volatile anaesthetics delivered at BIS-equivalent doses, propofol causes a significant reduction of cerebral blood flow and a similar decrease in cerebral metabolic rate of oxygen consumption [9].

Other studies have demonstrated that volatile anaesthetics can maintain higher cerebral oxygenation than propofol during anaesthesia. These studies include procedures performed in the supine position for tumorectomy for breast cancer or inguinal hernia repair, in sitting position for arthroscopy, in Trendelenburg’s position for gynaecologic laparoscopic surgery or laparoscopic cholecystectomy [10-13]. All four studies compared sevoflurane and propofol regarding their effect on regional cerebral oxygen saturation using near-infrared spectroscopy monitoring. The discrepancy between those results and our findings raises the question whether the prone position was a contributing factor for differences between sevoflurane or desflurane volatile agent. Changes in body position or head rotation during surgery and various surgical manipulations can cause significant respiratory and cardiovascular alterations that can negatively affect cerebral perfusion and hemodynamics. Regarding the prone position, Babakhani et al. have demonstrated significant decreases in rSO2 after 30 and 60 minutes of prone positioning compared with the values in the supine, which were not clinically important and reached supine values after 90 minutes of the prone position. They used propofol for induction and a combination of propofol and sevoflurane for maintenance of anaesthesia [14]. They also stated that the decrease in rSO2 caused by prone position could be more severe in older patients, which is also supported by other studies [15].

Other perioperative positioning challenges may have different effects. Studies have suggested that Trendelenburg positioning with the head tilted down over a substantial surgical period did not affect cerebral oxygen saturation [16, 17]. In contrast, in the beach chair position, by positioning the anaesthetized patient head up, the oxygen saturation of the brain decreased by about 10% from baseline levels. In the context of comparing desflurane and propofol effects on cerebral oxygenation, Kim et al. studied the effects of these two anaesthetic agents in the sitting position [18]. The authors showed that the rSO2 decreased significantly from the baseline in both groups. These findings are consistent with our research which shows a decline in rSO2 in both propofol and desflurane groups 10 minutes after prone positioning. However, comparing rSO2 values between the two groups, the authors have shown that the rSO2 in the desflurane group was higher compared to the propofol group concluding that desflurane preserved rSO2 better than propofol. This is inconsistent with our results which suggest that there were no significant differences between these anaesthetics throughout the prone position period.

Closhen et al. studied the changes in cerebral oxygen saturation following prone positioning using 2 different monitors, an INVOS cerebral oximeter for continuous rSO2 measurement and a FORE-SIGHT cerebral oximeter for absolute cerebral tissue oxygenation (StO2) measurement, while also comparing awake and anaesthetized patients [19]. Propofol 2mgkg-1 was used for induction and sevoflurane 0.7-1.0 MAC to maintain anaesthesia. They reported an initial decrease in rSO2 (from 75%±8% to 72%±8%) and StO2 (from 74%±5% to 72%±4%) in anaesthetized patients after prone positioning with a subsequent increase rate of 0.0324%/min. Awake volunteers did not show any significant change in cerebral oxygenation after prone positioning. The authors reported that the prone position did not induce any clinically significant change in cerebral oxygen saturation in both patient groups. Our results are comparable regarding the desflurane group, where a significant initial reduction in rSO2 was recorded from supine to prone position and was followed by an increase in rSO2 at the end of surgery in the prone position. Whereas, in the propofol group the initial rSO2 reduction remained significant throughout the prone position period. This comparison suggests that sevoflurane and desflurane may share more in common than propofol regarding their activity on the cerebrovascular system.

In conclusion, in the present prospective randomized double-blinded study conducted on patients undergoing spinal surgery in the prone position, desflurane and propofol were associated with a significant decrease in rSO2 without differences between these two anaesthetics.

© 2021 Stachtari Chrysoula. This is an open-access article distributed under the terms of the Creative Commons Attribution License, which permits unrestricted use, distribution, and reproduction in any medium, provided the original author and source are credited. Hosting by Science Repository.
DOI: 10.31487/j.ACR.2021.01.02

a: Based on t-test, b: based on M-W test, c: based on Chi-Square test. Data are presented as mean ± standard deviation or number (proportion, %)

Table 4: INVOS data during the procedure between groups.

Table 5: INVOS data during the procedure for each group separately.