Congenital diaphragmatic hernia (CDH) is an uncommon neonatal pediatric surgical problem. About 5-25% of cases had delayed presentation, making diagnostic challenge and requiring a high index of suspicion. Combination of diaphragmatic hernia and severe pneumonia with rapid deterioration of the case up to respiratory failure is a rare occasion. Herein, we present a case of 2-years-old female referred to our hospital intubated, ventilated due to type 2 respiratory failure resulting from dual chest pathology (severe pneumonia and left sided congenital diaphragmatic hernia). She was admitted at the pediatric intensive care unit (PICU), stabilized then operated for repair of her diaphragmatic hernia. Post-operatively, she remained intubated, ventilated for 7 days then weaned gradually from the ventilator. The cardiorespiratory status has much improved and she started oral feeding by the 8th post-operative day and discharged home in a stable condition.

Congenital diaphragmatic hernia (CDH) refers to a congenital defect in the posterolateral diaphragm at the “Foramen of Bochdalek.” It is a relatively common cause of neonatal respiratory distress with an overall incidence of 1:3000 (1 in 2000-5000) live births, about 33% of cases are stillborn (it predominates in females if stillborn fetuses are counted) [1, 2]. Embryologically, it results from failure of development of different parts of the diaphragm which occurs during 8th gestational week resulting in patency of the pleuroperitoneal canal [2]. Classically, CDH manifest early after birth. But, sometimes, it has a delayed diagnosis in older children, adolescents or even adults. The presenting symptoms can be vague and equivocal in most instances.

A 2-year-old female patient referred to our hospital intubated, ventilated due to type 2 respiratory failure (hypercapnia pCO2: 82 mmHg & hypoxia pO2: 28 mmHg) resulting from dual pathology (severe pneumonia and left sided congenital diaphragmatic hernia) with no history of trauma. The patient was the result of consanguineous marriage with past history of 3 abortions. Her mother had uneventful antenatal follow up course. She was delivered by Caesarian section at near term (36 weeks gestation) with birth weight of 1200 gm and incubated at neonatal intensive care unit (NICU) for 5 days because of low birth weight (LBW) and jaundice. Again, she was admitted in the incubator for 10 days because of high fever with chest infection. Within the previous 2 years, she did not complaint of any pathology. She weighs 11 kg with delayed motor developmental milestones (still only walks with stretcher support). The parents declared that she was well and good tell 3 days back with fever, nasal discharge, and productive cough for which her parents sought medical advice, then she became cyanotic with pO2 saturation dropped to 72% for which she had been intubated & ventilated. 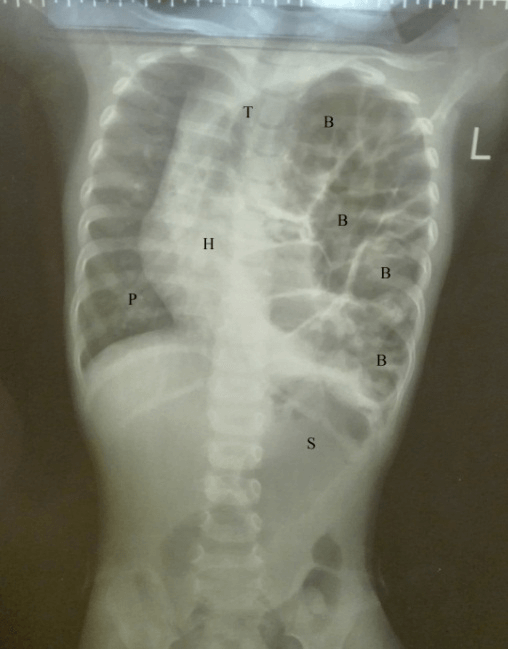 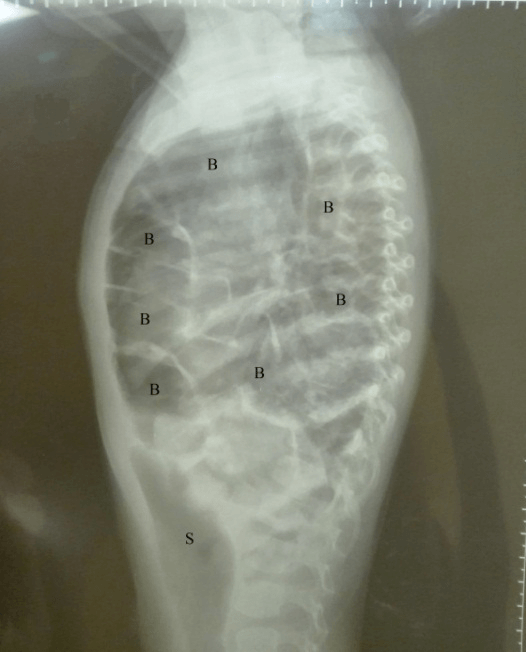 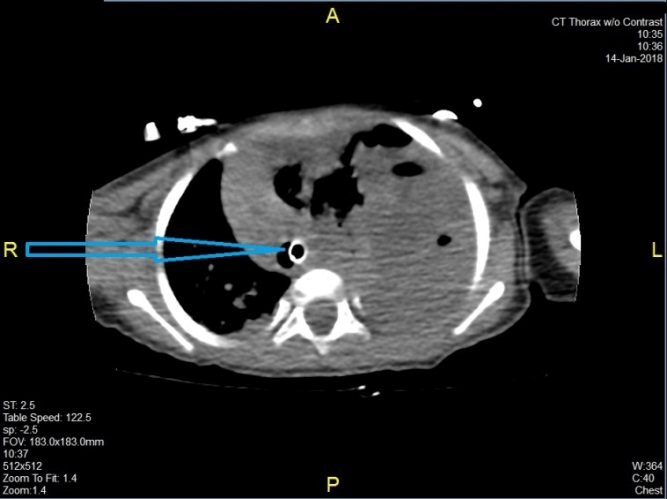 After stabilization of the case and correction of acid-base/ fluid & electrolytes panel derangements and optimization of the general condition, she was operated for repair of her diaphragmatic hernia that was accomplished by minilaparotomy on the left upper abdomen (due to fragile status of the patient & surgeon preference) followed by reduction of the bowel loops and closing the diaphragmatic defect primarily without need for any prosthetic patch. Post-operatively, she remained intubated, ventilated for 7 days then weaned gradually from the ventilator. The cardiorespiratory status has much improved and she started oral feeding by the 8th post-operative day and discharged home after tolerating full oral intake and normal defecation. Mask ventilation was avoided to prevent further bowel distension. High frequency oscillatory ventilation (HFOV) was the best option for respiratory support. 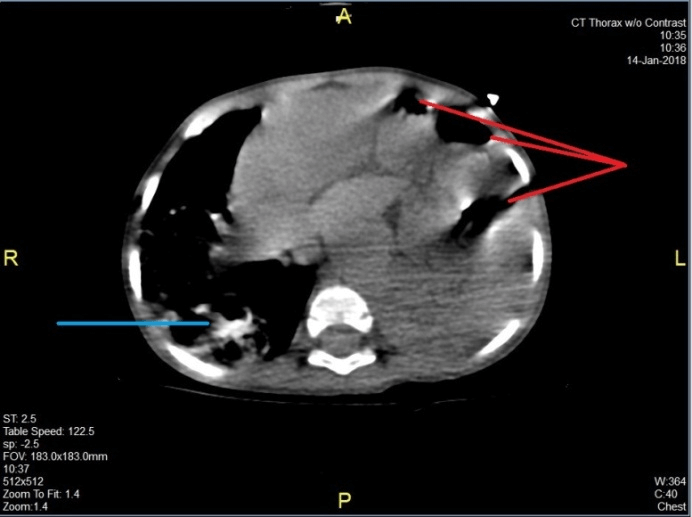 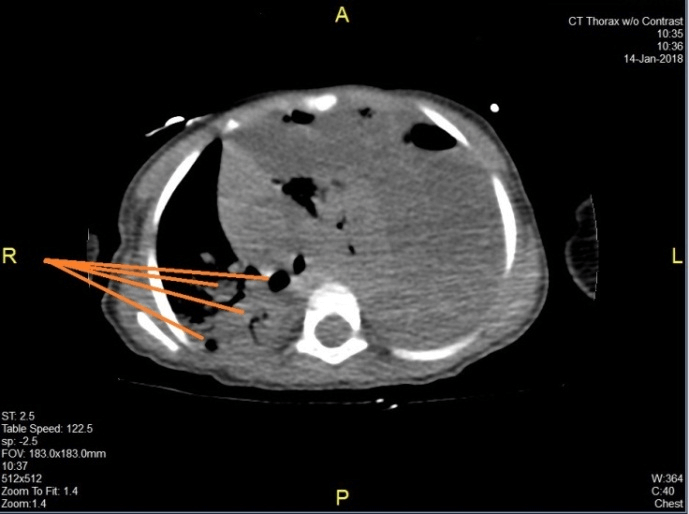 Congenital diaphragmatic hernia (CDH) is one of the common congenital anomalies with estimated incidence 1:3500 live births (between 1in 2000 to 5000 births) [2]. The exact etiology of CDH is not completely known. It is presumably a multifactorial pathology with exposed genetically susceptible fetus to pharmacologic & environmental teratogens especially the recognized association between CDH and vitamin A deficiency [2, 3]. This case was dealt with seriously because of suspected Corona virus infection from fear of the China epidemic episode of 2019-nCoV or endemic MERS-CoV in Saudi Arabia. The resulting severe pneumonia may be explained by occurring during the current epidemic novel Corona virus (2019-nCoV) or other viruses causing severe acute respiratory syndrome (MERS-CoV) or by gram negative bacteria from perforated bowel inside the chest. The first possibility was excluded by nasopharyngeal lavage for Corona virus assay that revealed negative. The second explanation is not an accepted possibility in the setting of the distended bowel in the chest as shown in the radiologic images (bowel loops are distended with no pleural effusion and, no pneumoperitoneum). Pneumonia in the case has rapidly deteriorated as the patient has markedly limited respiratory reserve.

Lately presenting CDH is defined as being discovered beyond the first month of life. It may be incidentally discovered during radiologic evaluation of unrelated cause, can mimic tension pneumothorax, or during assessment for recurrent chest infections or postprandial discomfort or presented acutely as emergency by bowel/ gastric strangulation or perforation. Many articles in the literature describe cases of lately presenting CDH with several scenarios ranging from asymptomatic cases to cases with respiratory distress to the extremis with acute catastrophic gastrointestinal conditions [4-7].Our case has been diagnosed by chest radiography and chest CT scan as in similar articles [8, 9]. Fortunately, no major associated congenital anomalies were present in our patient, predicting the good outcome. The better outcome of delayed presentation of CDH is the usual event as it is ameliorated by absence of pulmonary hypertension and lung hypoplasia. The peculiar issue in the current case is the strange clinical scenario of rapidly deteriorating respiratory distress up to type 2 respiratory failure associated with septic shock with pending multi-organ failure due to combined pathology (the congenital diaphragmatic hernia and the acquired severe pneumonia).

A similar case of CDH in 2 years old male child presented lately masquerading as tension pneumothorax has been reported by Choi et al., 2019. The CDH was diagnosed only by CT scan chest [10]. Similar articles described the same presentation [11-13]. Also, Blood et al. describes a case of Morgagni hernia presented with intestinal malrotation. Also, they cited a study conducted at 2019 at a high-volume center in the Netherlands between 2000 and 2015 consisting of retrospective analysis of 197 patients with CDH finding malrotation in 76 patients (39%) with higher incidence of bowel herniation in the malrotation group [2]. Pradeep et al. described a case of lately presented CDH with iatrogenic gastric perforation by chest tube insertion on assumption of left sided pyothorax [13]. Similar cases have been reported with chest tube insertion leading to iatrogenic perforation in patients with undiagnosed diaphragmatic hernia [14, 15].

Written informed consent was obtained from the parents to publish the images & details. No written details or photos in this article could lead to identification of the relevant case.

All authors attest that they meet the current ICMJE criteria for authorship.

We thank the parents for their acceptance to publish the case images and findings.

Case Report and Review of Literature

© 2019 Muhammad Elsayed Abdelhafez Mahmoud. This is an open-access article distributed under the terms of the Creative Commons Attribution License, which permits unrestricted use, distribution, and reproduction in any medium, provided the original author and source are credited. Hosting by Science Repository. All rights reserved.
DOI: 10.31487/j.AJSCR.2020.01.09