Pancreatic malignancies of epithelial origin are classified as either endocrine or non-endocrine. The most frequent non-endocrine carcinomas are the ductal ones, which are subclassified into adenocarcinomas, which are common, and squamous cell carcinomas. Squamous cell pancreatic carcinomas are extremely rare and only few reports are found in the international literature. Treatment options for this rare entity are limited and poorly understood. R0 resection of the tumor is the only potentially curative treatment option when feasible. Most patients are diagnosed with unresectable disease and receive palliative chemotherapy. The local-regional recurrent pancreatic carcinomas are usually inoperable. These patients usually receive chemoradiotherapy for palliation.

A 49-year-old man presented with upper abdominal pain 5 months after laparoscopic distal pancreatectomy and splenectomy for a poorly differentiated squamous cell carcinoma of the pancreatic tail. Despite recommendations the patient had refused any further treatment. The CA 19-9 was elevated at 2000 IU/ml and the CT-scan revealed the presence of a new mass at the site of previous surgery that invaded the left kidney, the transverse colon, and the gastric fundus. Another tumor was visible at the left hemidiaphragm (Figures 1A & 1B). No other sign of distant metastasis was detected. The patient underwent cytoreductive surgery that included epigastric peritonectomy procedure (wide resection of the old scar with the round and the falciform ligaments of the liver and the umbilicus), cholecystectomy, appendectomy, additional distal pancreatectomy, proximal gastrectomy, partial resection of the left hemidiaphragm, resection of the left kidney with the left adrenal, transverse colectomy, and greater omentectomy. 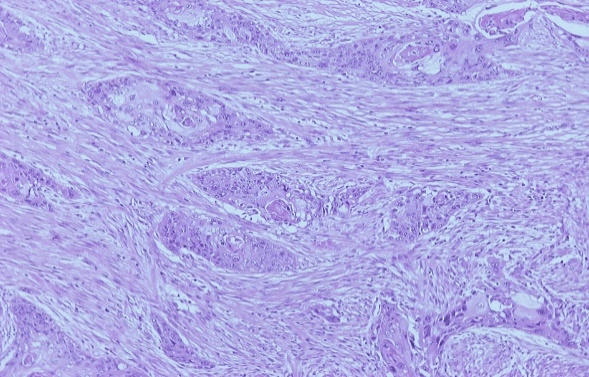 The cytoreduction was assessed as CC-0 surgery because no macroscopically visible tumor was left behind. The left hemidiaphragm was left opened and bicavitary HIPEC with gemcitabine (1000mg/m2) for 60 minutes at 42.5-43°C was administered. After the completion of HIPEC the hemidiaphragm was sewn and the reconstruction of the gastrointestinal tract was possible with hand-sewn esophago-gastric anastomosis, pyloroplasty, and end-to-end colo-colic anastomosis. Histopathology revealed the presence of a recurrent poorly differentiated pancreatic squamous cell carcinoma (Figure 2) that invaded the fundus of the stomach, the pericolic fat of the transverse colon, the left kidney parenchyma, and the left adrenal. The greater omentum was not involved as well as none of the 25 resected lymph nodes.

The gallbladder, the appendix, the old scar, and the left hemidiaphragm were normal. Additional systemic chemotherapy with abraxane and cis-platin was given and the patient was disease-free 7 months after surgery. The new CT-scan showed peritoneal carcinomatosis with implantations at the middle line, the distal ileum, and the transverse colon. The patient underwent secondary cytoreduction which consisted of segmental resection of the distal ileum, transverse colectomy, and HIPEC with cisplatin+doxorubicin. Surgery was assessed as CC-0 because no macroscopically tumor was left behind. 5-FU+Leucovorin were administered systemically during HIPEC. Three months later the patient presented liver and osseous metastatic disease and died 4 months later.

The non-endocrine tumors of the pancreas are classified into 1) ductal cell origin, 2) acinar cell origin, 3) mixed cell type, 4) connective tissue origin, and 5) uncertain histogenesis [1, 2]. Ductal cell carcinoma is the most frequent type and is further subdivided into adenocarcinoma that constitutes about 75-81% of all tumors, and squamous cell carcinoma. The incidence of squamous cell pancreatic carcinoma varies from 0.5 to 5% [2-4]. Normally, the pancreas does not contain squamous cells. However, during periods of inflammation the ductal columnar cells may undergo squamous metaplasia. Squamous metaplasia has been found in cytologic specimens from chronic pancreatitis, biliary stent placement, or even primary or metastatic squamous cell carcinoma [5].

The evolution of pancreatic squamous cell carcinoma has been attributed to 1) malignant transformation of a primitive cell capable to differentiate either to squamous or glandular carcinoma, 2) squamous metaplasia of a pre-existing adenocarcinoma, 3) malignant transformation of an aberrant squamous cell, or even 4) tumor collision [3, 6-8]. Metastatic squamous cell carcinoma of the pancreas should also be considered, although it is very rare with the lung, the esophagus, the skin or even the cervix in women being the primary [5, 8]. The patient of our case had been scrutinized by physical examination, upper gastrointestinal tract endoscopy, and CT-scan and no pathology from the lungs, the skin, and the esophagus was detected. As a consequence, the metastatic origin was excluded.

The biologic behavior and the clinical presentation do not differ from ductal adenocarcinoma of the pancreas, although upper gastrointestinal tract bleeding secondary to gastric invasion appears to be more frequent in squamous cell pancreatic carcinomas [9]. There is no sex or anatomic location preference and no specific radiographic feature may raise the suspicion of squamous cell pancreatic carcinoma although enhancement of the tumor on contrast CT, and tumor blush patterns on angiography have been more frequently demonstrated. These are not specific findings and may be found in other tumors of the pancreas [10]. Surgical resection is the only treatment option with curative intent. In the majority of the cases this is impossible either because the tumor is diagnosed with synchronous distant metastases or because it invades major regional vessels (portal vein or superior mesenteric artery or vein). R0 resection has been referred for adenosquamous carcinomas [11-13].

Chemotherapy or radiotherapy are ineffective and are used only for palliation [8]. The patient of our case was a typical example of pancreatic cancer that presented with local-regional recurrence. Despite the number of resected viscera, the extent of peritoneal carcinomatosis was small. The abdominopelvic regions 0 (transverse colon, middle line, and greater omentum) and 3 (left hemidiaphragm) were found with lesion-size implantations >5cm according to Sugarbaker’s criteria [14]. As a consequence, the peritoneal cancer index (PCI) was 6, making complete cytoreduction (CC-0), which is identical to R0 resection, possible. Gemcitabine is a potent cytostatic drug for ductal pancreatic adenocarcinoma, in contrast to squamous cell carcinoma for which no effective chemotherapy has been found.

However, gemcitabine administered intraperitoneally with heat may probably potentiate the cytotoxic effect in an attempt to eradicate the microscopic residual cancer emboli. The same effect has been seen in platinum-resistant ovarian cancer that receive platinum derivatives during HIPEC with favorable results [15]. Despite the ineffectiveness of cytostatic drugs gemcitabine, carboplatin, 5-FU, and vinblastine have been used [3, 16, 17]. During HIPEC the left hemidiaphragm was left opened and chemotherapy was administered in both the peritoneal and the left pleural cavity. The purpose of bicavitary chemotherapy was the eradication of microscopic cancer emboli that possibly were disseminated during resection in the pleural cavity. This combined therapeutic strategy has been attempted in patients with peritoneal carcinomatosis of ductal pancreatic origin in a few patients with acceptable morbidity and survival [18]. The patient presented recurrence despite aggressive treatment shortly after surgery. Although complete cytoreduction was possible very shortly the patient presented distant metastatic disease and died.

A reliable prognosis for recurrent squamous cell pancreatic carcinoma is impossible despite complete cytoreduction in combination with HIPEC and systemic chemotherapy.

© 2019 Antonios-Apostolos Tentes. This is an open-access article distributed under the terms of the Creative Commons Attribution License, which permits unrestricted use, distribution, and reproduction in any medium, provided the original author and source are credited. Hosting by Science Repository. All rights reserved.
DOI: 10.31487/j.AJSCR.2020.02.02