Background: Intussusception is a rare complication after Roux-en-Y gastric bypass (RYGB) and extremely rare after near total gastrectomy.
Case Presentation: 46-years-old woman (BMI=40 kg/m2, co-morbidity: hypertension) operated about seven months before of near total gastrectomy (for distal gastric cancer) with a small bowel resection with Roux and Y gastric reconstruction , presented epigastric pain after meals, alvus alterations lasting by a week, vomiting in the last days with leukocytosis and transaminase and amylase increase. The CT scan showed peri-hepatic fluid, gastric, duodenal and jejunal dilatation, a "target like imagine" of jejuno-jejunal anastomosis with small bowel air-fluid levels, normal intestinal loop downstream the jejuno-jejunal anastomosis. During laparoscopy we discovered ischemia of common jejunal tract intussuscepted into the jejuno-jejunal anastomosis. The common ischemic intestinal tract and the anastomosis were resected “en-bloc” and jejuno-jejunal anastomosis was performed again.
Conclusion: The symptoms of small bowel intussusception after near total gastrectomy are not specifics but the risk of severe complications requires an early diagnosis and treatment. According to literature data, CT-scan is the gold standard for the diagnosis but in unclear cases it is mandatory an early laparoscopic exploration to confirm the clinical suspicion and to perform the appropriate treatment.

Adult intussusception is uncommon, making up only 5% of total cases of intussusception and accounting for 1-5% of adult intestinal bowel obstructions . Tumors cause the majority of adult intussusception (benign 25% and malignant 27.3%). Other causes include inflammatory bowel disease and anatomic abnormalities, such as the Meckel’s diverticulum or the mobile caecum [1]. Intussusception after near total gastrectomy is a rare cause of intussusception, with an increasing incidence [2, 3]. It is usually associated with lesions defined “lead point”, such as cancer, polyps, adhesion it is defined anterograde or retrograde by isoperistaltic or antiperistaltic behavior of the intestinal loop intussuscepted [4-14]. Its pathophysiology after near total gastrectomy is still unclear. Due to the rapid increase in the rate of bariatric surgery, intussusception is becoming an increasingly emergent post-operative complication, also post-laparoscopic Roux en Y gastric bypass (LGBP) [9]. It usually develops one year after a laparoscopic gastric intervention with Roux en Y reconstruction, predominantly in females after an important weight loss [6, 8, 15]. The symptoms (abdominal pain, nausea and vomiting) are unspecific and are common to the other causes of intestinal obstruction such as internal hernia, [5, 8, 15-18]. CT scan with contrast is highly recommended, with a specificity of 80% reported in the literature [1, 2, 5, 9, 19]. It has not yet been established what is (resection or reduction) the best treatment for intussusception after near total gastrectomy, anyway surgical exploration is highly recommended in the literature [18]. 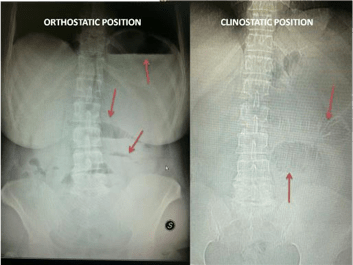 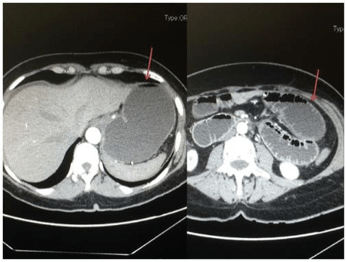 We performed a near total gastrectomy for distal gastric cancer in a 46- years-old woman. She had a BMI of 40 kg/m2 and reported an history of hypertension, urinary stress incontinence, hiatal hernia, reflux esophagitis, previous tonsillectomy and a caesarean section. The follow- up was regular until the seventh month after the intervention when she presented post-prandial epigastric pain, alvus alterations and vomiting in the last day. For these reasons she was readmitted in our center. The patient was apyretic, presented normal vital parameters and an important weight loss (33 kg). The physical abdomen examination showed an intestinal distention, pain at deep palpation in the left side but no signs of peritoneal irritations. Blood tests showed leucocytosis, slight alteration of transaminases and amylases. The Abdomen-RX showed gastric, duodenal and jejunal dilatation with small bowel air-fluid levels abdominal CT scan showed peri-hepatic fluid and signs of intussusception at the level of jejuno-jejunal anastomosis with distention of the upstream loops and stomach with air-fluid levels (Figure 1-3). The patient was immediately treated by laparoscopy. The abdominal exploration did not show internal hernias, but we found the ischemia of common jejunal tract intussuscepted into the jejuno-jejunal anastomosis (retrograde intussusception) producing an occlusion of biliary and alimentary intestinal tract (Figure 4). The anastomosis was resected “en- bloc” with common ischemic ileal tract and the jejuno-jejunal anastomosis was performed again with a temporary gastrostomy (Figure 5). The postoperative course was regular with progressive removal of abdominal drains and gastrostomy closure after the canalization. The patient was discharged in the 10th post-operative day and the 12th month follow-up was regular, except for an incisional supraumbelical hernia. 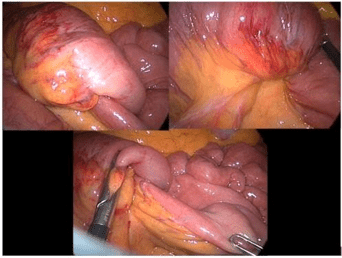 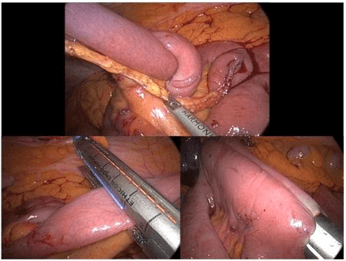 According to the literature intussusception is a rare disease in adults, with an incidence of 1-5%[1]. It may be primitive or secondary, in particular it may be a surgical complication with a percentage of 0.06- 1,2% [5, 6, 8, 15, 19]. Intussusception is anterograde or retrograde according with the direction of peristalsis: isoperistaltic or antiperistaltic [7, 11-14, 20, 21]. There are four theories in literature to explain the onset of a post Roux -En-Y jejunal reconstruction intussusception. Stephenson et al. in their review of literature, deemed that a rapid weight loss associated with a thinning of the mesentery may cause retrograde peristalsis [22]. We would emphasize there is a predisposition of women to intussusception at the nadir of their weight loss. The second theory supports the presence of lead point promoting intussusception such as the suture line or adhesions or lymphoid hyperplasia [4, 5, 19, 23]. Hocking et al. performed manometric studies on the Roux limb, finding peristalsis alterations that may explain the onset of retrogade intussusception [24]. Karlstrom et al. performed furher studies on dogs submitted to vagotomy and Roux gastrectomy, analizing myoelectric activity and founding an ectopic pacemaker that produces retrograde peristalsis [25]. 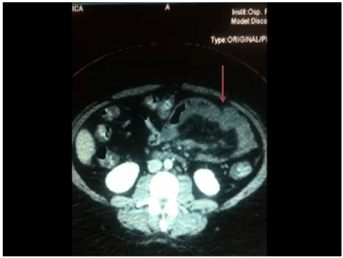 Currently authors agree on a multifactorial etiology that includes all these four theories [3, 18]. Generally, intussusception presents a symptomatic triad, especially in children, characterized by: abdominal pain, red-currant jelly stool and palpable mass. The symptoms of intussusception after near total gastrectomy are aspecific; the most reported symptoms in the literature are: intermittent acute or chronic abdominal pain without a peritoneal reactivity, nausea, vomiting [5, 8, 11, 16, 17, 18]. Daellenbach emphasizes that in the intussusception of biliopancreatic tract the patient does not complain any symptoms of a bowel obstruction, but reports abdominal pain, increased pancreatic and bile enzymes, associated with tachycardia or hypotension if there is intestinal ischemia [6]. Our patient had an exacerbation of the symptoms characterized by the appearance of vomiting and an alteration of transaminases and amylases, according to the Literature but without specific symptoms of intussusception. All Authors agree with the importance of the CT-scan as the gold standard for the diagnosis with an accuracy of 80% [4, 5, 14, 17, 26]. CT specific signs are: “target” imagine which confirms the presence of bowel wall intussuscepted inside the tract that appears expanded the “telescope” sign when the intussuscepted bowel seems a telescope into the adjacent distal intestinal loop (Figure 3 & 6) [27-28]. In this case we performed both X-ray and CT scan.The X ray of the abdomen only showed the intestinal dilatation. On the contrary the subsequent contrast CT-scan showed both signs of intussusception and a dilatation of the small intestine with peri-hepatic fluid due to the loop suffering, so we proceeded to early surgery.

Currently, there is no consensus on definitive treatment for intussusception post- near total gastrectomy. It may include the simple intussusception reduction with or without the plication and the anastomotic resection with intestinal stump re-anastomosis [5, 6, 15]. Manual reduction with or without plication/pexy procedure has been described in many studies [3, 29, 30]. The resection must be conducted when there are signs of bowel necrosis. According to some studies the resection has statistically lower recurrence rates compared to manual reduction (7.7% versus 31.5%) [31]. Simper reported a 100% intussusception recurrence in patients only treated by the reduction, suggesting the need of performing a resection with the repair of the intussuscepted tract. [32]. Daellenbach supports this theory emphasizing the importance of the resection to remove the lead point, as the staple line, and also reports a 33.3% of recurrences in patients who underwent only to loop reduction with or without plication versus 7.7% in patients with loop resection. [6]. Stephenson on the contrary supports the reduction with the plication and Varban sustains that a conservative approach can reduce postoperative complications compared to a single case of relapse reported in his own series which however has a mean follow-up of 9 months [18, 22]. These two types of intervention may be conducted by open or laparoscopic tecnique depending on surgeon’s expertice and skill [6, 18].

In our patient, the laparoscopy showed an intestinal ischemia so the bowel resection with redo-anastomosis was mandatory. In conclusion the intussusception may be a rare complication after near total gastrectomy and predominantly affects females with an high weight loss. Diagnosis is difficult and should be supported by CT. In literature the etiology and the best treatment are still discussed although recently most studies recommend in all cases the intestinal resection with anastomosis’s remaking [6, 8, 9, 15, 16, 17, 31].

The intestinal intussusception is a rare complication not only of near total gastrectomy but also of other types of gastric interventions requiring a Roux en Y jejunal reconstruction. The symptoms of small bowel intussusception after near total gastrectomy are not specifics and could be underestimated or confused with other benign pathologies but the risk of severe complications requires an early diagnosis and treatment. Recurrent pain, nausea, vomiting and diarrhea in patients with an history of near total gastrectomy could induce the suspicion of intestinal intussusception (or other mechanical causes of subocclusion as internal hernia). According to the Literature, CT-scan is the gold standard for the diagnosis showing specific "signs" of intussusception. In some cases, the diagnosis is unclear, and it must be obtained by laparoscopy: a high index of suspicion of mechanical subocclusion at physical examination especially in bariatric patients is enough for an early laparoscopic exploration and treatment. We recommend an early laparoscopic exploration to also confirm the diagnosis and to decide about the appropriate treatment infact in case of not reducible intussusception or ischemic intestinal loop, the resection and redo-anastomosis are mandatory.

© 2019 Massimiliano Fabozzi. This is an open-access article distributed under the terms of the Creative Commons Attribution License, which permits unrestricted use, distribution, and reproduction in any medium, provided the original author and source are credited. Hosting by Science Repository. All rights reserved.
DOI: 10.31487/j.AJSCR.2019.01.07