Oral cancer is the sixth most common cancer in the world, high risk in South Asia with male preponderance [1, 2]. Lipopolysaccharides (LPS) are found in the cell wall of Gram-negative bacteria such as Porphyromonas gingivalis and Fusobacterium nucleatum, which take part in biofilm formation [3]. LPS has been reported to be associated with the progression of oral cancer [3]. Fusobacterium nucleatum LPS has been shown to upregulate β-catenin, which activates the c-myc, NF-kB and cyclin D kinases, resulting in the activation of cyclin D and consequent cancer cell survival and proliferation [4]. While P. gingivalis LPS downregulates p53 and upregulates NF-kB, MMP-9, and the JAK/STAT pathway, particularly STAT3 (which controls the intrinsic mitochondrial apoptotic pathway) [4]. This results in inflammation, anti-apoptosis, increased viability of oral cancer cells and increased oral cancer invasion [4]. Human hepatocyte growth factor (HuHGF) stimulates stromal fibroblast-induced invasion (epithelial-mesenchymal cells) in the progression of oral cancer [5]. HuHGF is upregulated by LTA from bacteria (Streptococcus mutans, Streptococcus pyogenes, Streptococcus faecalis, Streptococcus sanguis, and Streptococcus aureus) of oral biofilm [6]. Other than its induction of HuHGF, the role of LTA in the proliferation of oral cancer cells remains elusive [6]. Therefore, we hypothesised that LPS and LTA together would increase the proliferation of cancer cells compared to stimulation with LPS alone. We present here the effect of combined bacterial antigen on select oral cancer cell lines and explore the proliferation pathways that may be affected by these bacterial antigens.

Details of all materials and reagents used in this study are provided in (Supplementary Table 1).

I Culture and Maintenance of Cells

Cal 27 at 5000 cells were plated into each well of a 24-well plate. The bacterial antigen treatments were performed for 72 hr on the cells. To fix the cells, 1 ml 100% ice-cold methanol (Chem-Supply, Cat #MA004-2.5L-P), was added. After 1 min, the methanol was removed and the plates were air-dried until completely dry, followed by the addition of 0.1% crystal violet (Sigma Aldrich, Cat #C5042), allowed to develop for 20 min.

Proteome Profiler Human Phospho-Kinase Array kit (R&D Technologies, Cat #ARY003C) was used to identify proliferation-related phosphorylated protein expression in the bacterial antigen treated Cal 27. After this treatment, the protein extraction from the treatment conditions and the array procedure was followed according to the manufacturer’s instruction. Details are available in (Supplementary Notes 1 & 2, Supplementary Figure 1, and Supplementary Tables 3 & 4).

SOCS3_F5’GCGCGAAGGCTCCTTTGTG3’;SOCS3_R5’GGGGGGCTGGTCCCGAATC3’;STAT3_F5’GGACATCAGCGGTAAGACCC3’;STAT3_R5’CTCTGGCCGACAATACTTTC3’;EGFR_F5’AGCTACGGGGTGACTGTTTG3’;EGFR_R5’GAACTTTGGGCGACTATCTG3’;GAPDH_F5’GACAGTCAGCCGCATCTTCT3’;GAPDH_R5’ACCAAATCCGTTGACTCCGA3’;PIK3CA_F5’TGGGGATGATTTACGGCAAG3’;PIK3CA_R5’TCCCACACAGTCACCGATTGA3’ were used as primers for the determination of the proliferation-related protein via RT-qPCR (Details are available in Supplementary Note 3 and Supplementary Tables 5-7). Cal 27 cells were plated at a density of 50,000 cells per well in 96-well plates. On subsequent days, bacterial antigen treatments were done. At the completion of the treatment period, total RNA was isolated from the samples with Pure Link RNA mini kit (Invitrogen, Cat #12183018A) and Trizol reagent (Invitrogen, Cat #15596026). The RNA was reverse transcribed by SSIV VILO Master Mix W/EzDNase (Invitrogen, Cat #11766050). qPCR was done using POWRUP SYBR Master Mix (Invitrogen, Cat #A25742). A ViiA 7 qPCR system (Thermo Fisher Scientific) was used to do the comparative Ct (∆∆Ct) analysis.

High-resolution images of clonogenic assay, phosphokinase array, and Western blot were acquired using the Bio-Rad Chemidoc MP Imaging system and processed using Image Lab version 6.0.0 build 25, © 2017 (Bio-Rad Laboratories). For clonogenic assays, the plates were also imaged using a Nikon Coolpix 4500 camera. Colony area intensity, the total number of colonies and densitometric analysis of the images were carried out with plugins for the colony area, particle analysis, and microarray of ImageJ 1.52a (National Institutes of Health; Java 1.8.0_112; 64 bit) (Link). The band density of the loading control protein (untreated Cal 27) and GAPDH (internal control) were used to normalise the protein expression in the treatments. 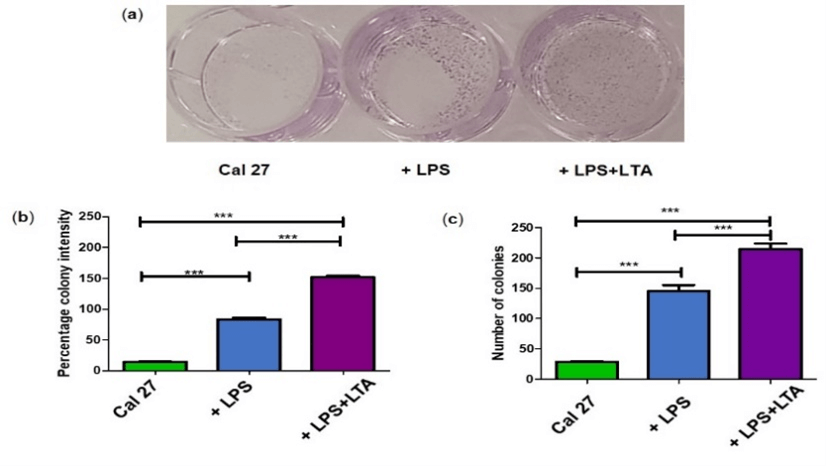 The percentage colony intensity and the number of colonies estimated by image analysis (Figure 2a) were significantly higher when Cal 27 cells were stimulated with LPS (p ≤ 0.001) (Figures 2b & 2c). Stimulating cells with combined LPS+LTA resulted in even greater colony intensity and more colonies (p ≤ 0.001) (Figures 2b & 2c), confirming our previous finding that bacterial antigens stimulate Cal 27 cells, and this stimulation is greater when both Gram-positive and Gram-negative antigens are combined. 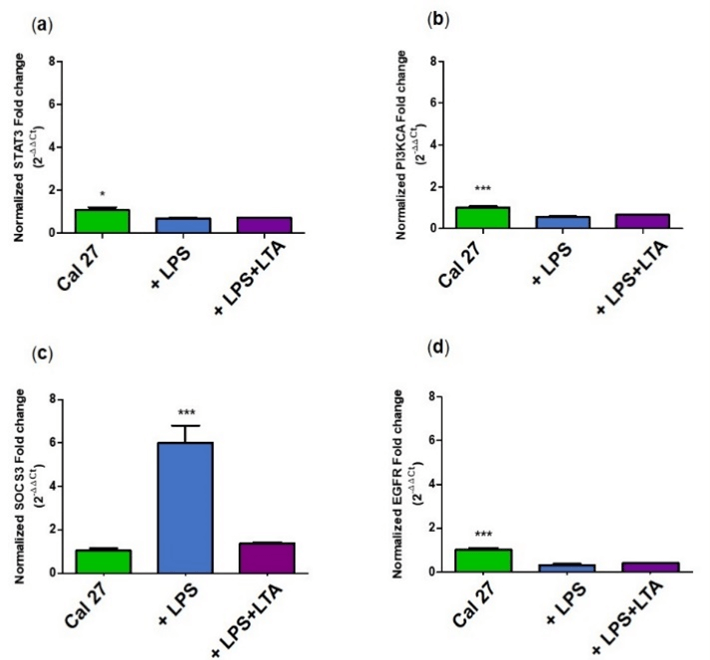 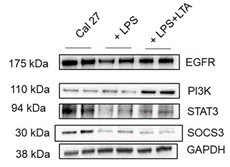 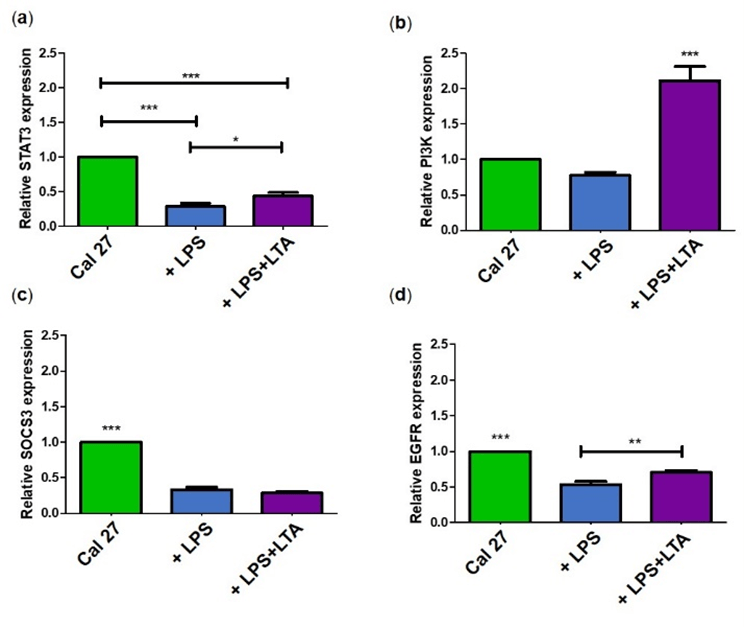 Both LPS and LTA individually stimulate Cal 27 cells but not SCC25, with negligible effect on SCC4 and SCC9. Therefore, this study focussed on Cal 27. Based on the results of Cal 27 MT Glo and clonogenic assays, the LPS+LTA combination has a significant effect than LPS stimulation, supporting bacterial biofilm as plaque may result in increased progression of oral cancer than anaerobic bacteria alone. This result was obtained in the complete absence of immune cells, unlike the Utispan et al. study [3].

While exploring the reason behind the synergistic effect of the combined bacterial antigens, LPS+LTA stimulation resulted in lower levels of phosphorylation of p53 (S15, S46, S392), Chk2 (T68), β-catenin, p38α (T180, Y182), and GSK 3α/β (S21, S9) than it did after stimulation with either LPS or LTA alone. This likely indicates downregulation of tumor suppressor protein activity of p53, p38α and Chk2 (major activator of p53), which are activated by phosphorylation; and downregulation of inactivated β-catenin, which is inactivated by phosphorylation [8-11]. Also, lower levels of phosphorylated (activated) GSK 3α/β and GSK 3β (compared to LTA stimulation) likely reflects the activity of GSK required for binding to inactivated β-catenin for β-catenin degradation and ubiquitination [11]. Also, downregulation of phosphorylated HSP 60 (compared to LTA stimulation), which has previously been shown to have a tumor suppressor-like function by inducing cell differentiation and inhibiting invasion in hepatocellular carcinoma, may further explain the current findings for Cal 27 [12]. However, phosphorylation of other proliferation-related proteins such as Yes-associated proteins (Y426), Src (Y419), EGFR (Y1086), eNOS (S1177), ERK 1/2 (T202/Y204 and T185/Y187) and STAT3 (Y705) was higher in untreated cells than in LPS+LTA stimulated cells. This finding is paradoxical and may require further investigation to explain the reduction in the abovementioned proliferation-related protein, although it has previously been shown that phosphorylation at Y705 of STAT3 may inactivate STAT3 by co-deactivation of S727 of STAT3 [13].

Contrastingly, LTA induced proliferation (that was found in the project) may be due to the phosphorylation of HSP60 (Co-expression of HSP60 and nuclear β catenin), Src and GSK3β. RSK 1/2 has previously been seen to promote invasion and metastasis of head and neck squamous cell carcinoma cells [14]. RSK 1/2 in its phosphorylated (activated) form was seen to be at higher levels in Cal 27 following LPS stimulation than in either after LTA or LPS+LTA stimulation. This may suggest that proliferation caused by LPS stimulation of Cal 27 using RSK 1/2 uses pathways other than Ras/MAPK/ERK 1/2 or that it occurs via upregulation resulting from a positive feedback loop involving other unknown pathways. Paradoxically, EGFR, eNOS, ERK 1/2, Src and RSK 1/2 expression associated with proliferation was found to be lowest after LPS+LTA stimulation, which showed the highest proliferation.

The relative gene expression of SOCS3 and PI3KCA were higher in Cal 27 whether untreated or following LPS stimulation than other treatment conditions. However, Western blot analysis, showed that SOCS3 protein expression was lowest and PI3K expression highest after LPS+LTA stimulation compared with untreated and LPS stimulated cells. This may indicate the lack of translation of SOCS3 and PI3K proteins [15]. Since SOCS3 is known to be a tumor suppressor protein and PI3K is a tumor proliferation-related protein, this result further supports the finding that Cal 27 after LPS+LTA stimulation produced the highest proliferation among all treatment conditions [16, 17]. Similar to the proteome profiling results, Western blot showed lower STAT3 and EGFR expression in Cal 27 after LPS+LTA stimulation compared with untreated cells. This may be because of the lower expression of SOCS3, which has been reported to have a positive feedback loop with STAT3 for Cal 27 [18].

PI3K expression was higher in the LPS+LTA stimulated cells than in untreated and LPS stimulated cells. These findings are in line with previous findings that the PI3K signalling pathway is activated by LTA [21]. Interestingly, the phosphokinase array did not show any appreciable expression of Akt 1/2/3 (serine 473, threonine 308) under any treatment condition, although expression of PI3K was detected in both the RT-qPCR and Western blot. This likely indicates that PI3K induced proliferation of Cal 27, rather than activating the downstream Akt pathway [22]. The project used LTA and LPS to simulate Gram-positive and Gram-negative bacterial infection, respectively. However, components of bacteria other than their bacterial cell wall antigens may be responsible for the progression of oral squamous cell carcinomas. Future studies on oral cancer cell lines, other than SCC4, SCC9, SCC25 and Cal 27 used in this study can give a broader idea regarding the effect of bacterial antigen on oral cancer cells.

This study was approved by the Macquarie University Biosafety Committee (“Mammalian Cell Culture” 5215).

© 2021 Shoba Ranganathan. This is an open-access article distributed under the terms of the Creative Commons Attribution License, which permits unrestricted use, distribution, and reproduction in any medium, provided the original author and source are credited. Hosting by Science Repository. All rights reserved.
DOI: 10.31487/j.DOBCR.2021.01.03