Co-Existence of a Rudimentary Non-Communicating Horn with a Unicornuate Uterus in Association with 2 Components of the VACTERL Association: A Case Report

The prevalence of congenital uterine anomalies has been reported as 6.7% (95% CI, 6.0-7.4) in the general population, although women with recurrent miscarriage have a prevalence of 16.7% (95% CI, 14.8-18.6) [1]. The unicornuate uterus is the consequence of the abnormal or failed development of one Mullerian duct and it accounts for 2.4-13% of all Mullerian anomalies [2]. The prevalence of unicornuate uterus in the general population is 1:1000 [1]. Approximately 75-90% of cases of rudimentary horns are non-communicating [3]. A unicornuate uterus (or Hemi-uterus) with a rudimentary horn (communicating or not) belongs to the U4a ESHRE/ESGE classification [4]. Pregnancy in the rudimentary horn is rare (1:100,000) [5]. It may, however, lead to uterine rupture usually with an emergency presentation associated with haemoperitoneum and high risk of maternal mortality [6]. There is an unusual association of birth defects first described by Say B and Gerald P in 1968, later described with the acronym of VATER: V (vertebral defect), A (anal atresia), TE (tracheoesophageal fistula), and R (radial dysplasia and renal defects) by Quan in 1973 and followed by the acronym VACTERL (addition of limb defects) in 1976 [7-9]. We report a patient with a unicornuate uterus and a non-communicating rudimentary horn with a link to the VACTERL association.

An 18-year-old woman was referred to our clinic complaining of severe dysmenorrhoea (8/10), pelvic pain and dyspareunia. Her menstrual cycle was irregular. She had undergone laparoscopic excision of endometriosis and insertion of a Mirena coil 5 months before which made no difference to her symptoms. She had attained menarche at the age of 13. She had been using the combined contraceptive pill for over the past 4 years with no relief of her dysmenorrhoea. Her surgical history included the excision of an extra thumb and the resection of a tracheo-bronchial remnant with primary esophageal anastomosis and fundoplication followed by endoscopic esophageal dilatations. Her physical appearance was normal, and her secondary sexual characteristics were normally developed. A bimanual examination revealed moderate discomfort on deep palpation and mobilization of the cervix. Blood tests including levels of CA 125 were reported as normal. Analysis of peripheral blood revealed a 46 XX normal female karyotype. Pelvic magnetic resonance imaging revealed two uterine horns with the left horn measuring 78 x 30 x 23 mm, containing a coil, and communicating with the cervical canal. The right horn was smaller than the left one and had an endometrial canal but showed no communication with the left horn. It would appear to be attached via a thick tissue band (Figure 1). Both ovaries revealed normal characteristics. The renal tract imaging revealed both kidneys of normal appearance and size.

Figure 1: MRI findings: There are 2 separated horns identified with the left horn communicating with the cervical canal. The right horn has an endometrial canal of its own which does not seem to communicate with the left horn or cervix and appears to be attached to the uterus via soft tissue band.

At laparoscopy a small right rudimentary horn was confirmed, and it was attached to the left unicornuate uterus by a thick band of tissue. The ovaries and Fallopian tubes had a normal appearance (Figure 2). There was no evidence of endometriosis. The appendix had a normal appearance. The coil was removed, and an intrauterine manipulator placed after a hysteroscopy was performed. The right ureter was identified retroperitoneally and dissected off, after the sectioning of the round ligament and the right Fallopian tube using a LigasureTM (Medtronic) device. The main artery to the rudimentary horn coursed lower and lateral to the left unicornuate uterus and it was involved by the above referred band of tissue. After the band of tissue was dissected off the arterial supply was diathermied and cut. Transillumination by hysteroscopy helped to delineate the plane of dissection. Two separated stitches of vicryl were applied to the lateral edge of the unicornuate uterus to reinforce its wall. The rudimentary horn was extracted after contained knife morcellation and using a laparoscopic endobag. Extensive lavage was done using Hartman’s solution (Figure 3). A Mirena coil was inserted at the end. The operating time was 110 minutes. The patient was discharged home the following day. The histology confirmed proliferative endometrium in the resected rudimentary horn. Eight months after the above surgery the patient is still pain free. 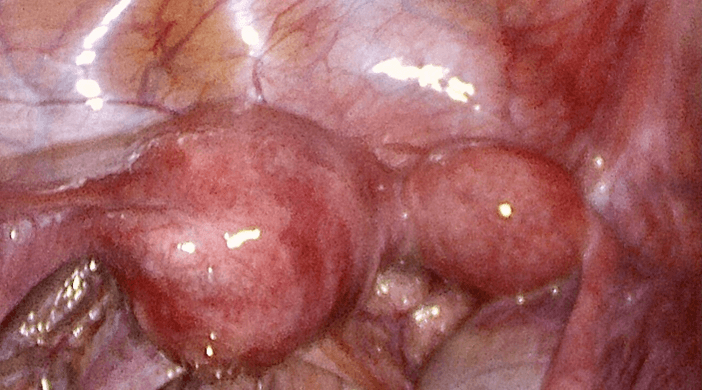 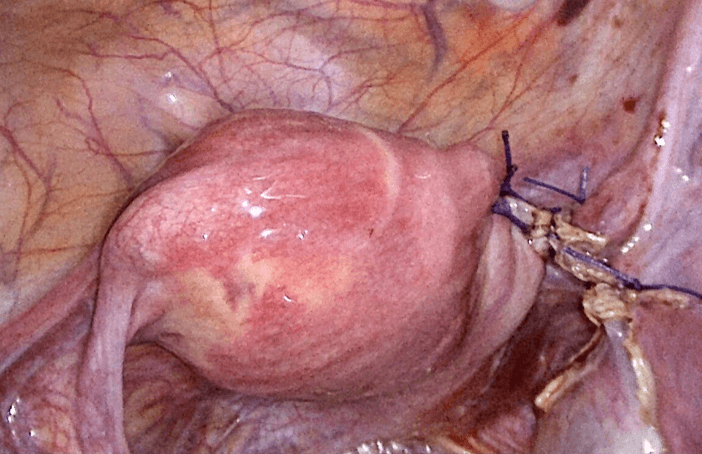 Figure 3: The rudimentary horn has been excised as well as the ipsilateral Fallopian tube. The right lateral aspect of the unicornuate uterus has been reinforced with 2 separated stitches of vicryl.

The prevalence of a unicornuate uterus in the general population is 1:1000 and is the consequence of the abnormal or failed development of one Mullerian duct, accounting for 2.4-13% of all Mullerian anomalies [1, 2]. Approximately 75-90% of cases of rudimentary horns are non-communicating [3]. Pregnancy in a non-communicating horn is rare (1:100,000) and it has been attributed to the trans-peritoneal migration of spermatozoa [5, 10]. Early diagnosis is challenging, and pregnancy progression usually results in the rudimentary horn rupture around the second trimester in 80-90% cases becoming an emergency with the consequent high maternal morbidity and mortality [11-18].

Although the diagnosis in the non-pregnant condition is difficult the presence of dysmenorrhoea (70% cases) and an adnexal mass together with haematometra (50% cases) should raise the possibility of a Mullerian anomaly. However, as endometriosis may be present in 20-40% cases and this is a very common condition, the diagnosis may be delayed [19]. A dedicated ultrasonography exam may be valuable in these circumstances to confirm the presence of a rudimentary horn and the extent of the functioning endometrium, but recently Magnetic Resonance Imaging has become crucial in the evaluation of Mullerian anomalies allowing for the simultaneous assessment of the anatomy, type of attachment between the rudimentary horn and the unicornuate uterus, and the study of the urinary tract as Mullerian anomalies are associated with renal anomalies in 40.5% cases and with one-sided renal agenesis in 28% [20-23].

Regarding treatment, there are 2 options: the first option involving a metroplasty, but long-term follow-up is still scarce with only one report of a patient who conceived by in vitro fertilization and embryo transfer and was delivered from twins by caesarean-section at 33 weeks [24]. The second option is the surgical excision of the non-communicating rudimentary horn, which was chosen in the patient we report. Although it does not improve the reproductive outcome it had the goal of treating the persistent severe dysmenorrhoea caused by haematometra, preventing any possible endometriosis recurrence and avoiding a pregnancy in the rudimentary horn with a potential life-threatening uterine rupture.

The VACTERL association is a non-random association of birth defects that affects multiple parts of the body (V-vertebral anomalies, A-anorectal malformations, C-cardiovascular anomalies, T-tracheoesophageal fistula, E-esophageal atresia, R-renal anomalies and L-limb defects). It should be defined by at least 2 or 3 component defects [27]. There is no cognitive impairment of the individual. The aetiology of VACTERL association is not well understood. A specific genetical abnormality has not been found but sporadic cases have revealed mutations in FGF8, HOXD13, ZIC3, PTEN, FANCB, FOXF1 and TRAP1 genes and mitochondrial DNA [28].

The presence of a non-communicating rudimentary horn associated to a unicornuate uterus carries a high risk for maternal mortality if the diagnosis is delayed and uterine rupture occurs during pregnancy. This case report stresses the importance of considering the diagnosis of a Mullerian defect in a patient born with components of the VACTERL association.

I am grateful to the theatre surgical team at Braemar Hospital, Hamilton, New Zealand for their invaluable assistance.

The Braemar Hospital Clinical Committee has approved this submission.

© 2021 Jose D Roman. This is an open-access article distributed under the terms of the Creative Commons Attribution License, which permits unrestricted use, distribution, and reproduction in any medium, provided the original author and source are credited. Hosting by Science Repository. All rights reserved.
DOI: 10.31487/j.CROGR.2021.02.01

Figure 1: MRI findings: There are 2 separated horns identified with the left horn communicating with the cervical canal. The right horn has an endometrial canal of its own which does not seem to communicate with the left horn or cervix and appears to be attached to the uterus via soft tissue band.

Figure 3: The rudimentary horn has been excised as well as the ipsilateral Fallopian tube. The right lateral aspect of the unicornuate uterus has been reinforced with 2 separated stitches of vicryl.