Actinomyces naeslundii and A. oris are dental plaque formers involved in the pathogenesis of periodontitis. The aim of the study was to investigate the clonal relationship within two oral Actinomyces populations collected from plaque of patients with chronic periodontitis. The 223 clinical strains of A. naeslundii and A. oris were isolated from biofilm samples collected supra and subgingivally from teeth with shallow (probing depth (PD) = 3-4 mm), deep (PD = 5-6 mm) and very deep (PD ≥7 mm) pockets from 20 chronic periodontitis patients. All strains were submitted to repetitive sequence-based PCR typing using DiversiLab (BioMerieux,Marcy l´Étoile, France). Seven patients harboured only unrelated (<95% similarity) multiple isolates, while 13 harboured both similar (>95% similarity) and unrelated isolates at different sites. Identical (>98% similarity) strains were found to be present in the subgingival shallow depths more often than in the other subgingival depths. The number of clones in individual patients varied from 2 to 17 different rep-PCR genotypes. The clonal relationship within the oral populations of A. naeslundii and A. oris in an individual was unpredictable, ranging from the presence of multiple genotypes with no clonal similarity to only two different clones supra or subgingivally at different sites.

Actinomyces spp. are gram-positive, non-motile, non-spore-forming, and pleomorphic rods [1]. Currently, Actinomyces spp. comprise 42 species, 20 of which are considered relevant to human medicine [2-4]. They are commonly part of the flora of the respiratory tract, oral cavity, and other habitats like the genito-urinary system and the skin [4, 5]. They are also associated with infections such as cervicofacial and hepatic actinomycosis, cerebral or oral abscesses, urinary tract infections, caries, and periodontitis [1, 6-11]. Actinomyces spp. act as early colonisers in the process of plaque maturation [11, 12]. They adhere to the tooth surface and provide a substrate for the adherence of other plaque microorganisms [13, 14]. Together with other bacteria, they form supra and subgingival polymicrobial biofilms, which are involved in the pathogenesis of different forms of periodontitis [12, 15-21].

Recent studies have shown that Actinomyces naeslundii can induce horizontal alveolar bone loss and can protect many bacterial species from hydrogen peroxide [22, 23]. Vielkind et al. determined a massive presence of A. naeslundii/oris/johnsonii that outnumbered all the other Actinomyces species in almost all the supra and subgingival/sulcular samples from both periodontitis patients and healthy subjects [24]. These findings support the fact that these species are probably the most important plaque formers among the members of the Actinomyces genus. Most of the previous studies have reported only the composition of supra and subgingival biofilms up to the species level, while the heterogeneity of the individual strains remains unexplored. The emergence of the automated repetitive sequenced-based PCR bacterial typing system, DiversiLab offers the possibility of such studies. Recent studies of the clonal diversity of Streptococcus mutans of household family members showed that DiversiLab is used to investigate the genetic diversity [25]. DiversiLab is known for simple and rapid genotyping of many bacteria including Staphylococcus aureus and Mycobacterium abscessus [26-30]. It is often used to investigate certain bacterial outbreaks or to type important isolates [31-33]. Recently, DiversiLab was used as a method for typing of enterohemorrhagic Escherichia coli [34]. The aim of the study was to investigate the clonal relationship within A. naeslundii and A. oris populations isolated from different depths of periodontal pockets in patients with chronic periodontitis.

I Bacterial Strains and Culture Conditions

A total of 223 Actinomyces strains (A. oris (44) and A. naeslundii (179)) were used in this study. They were isolated from the supra and subgingival biofilms of 20 periodontitis patients. Subgingivally, the samples were collected from teeth with shallow pockets (probing depth (PD) of 3-4 mm), deep pockets (PD of 5-6 mm), and very deep pockets (PD ≥ 7 mm). Supragingivally, the samples were collected from the sites corresponding to the previously mentioned pocket depths. The strains were frozen at -80°C in skimmed milk. Prior to use, the bacteria were cultured for 4 days on Colombia Blood Agar Base (Oxoid Microbiology Products, Thermo Fisher Scientific, United Kingdom) at 37° C in an anaerobic chamber (Whitley MG1000 anaerobic workstation, Meintrup DWS Laborgeräte, GmbH, Germany). All the strains were identified using MALDI-TOF-MS (Autoflex II, Bruker Daltonics, Billerica, MA) and by the sequence analysis of the 16S ribosomal RNA (rRNA) gene [35].

rep-PCR typing was performed using DiversiLab 3.6.0.39 (BioMerieux, Marcy l´Étoile, France), an automated repetitive sequence-based PCR bacterial typing system. This system allows the amplification of many different-sized fragments (amplicons) representing the DNA within the non-coding, repetitive sequences in the genome. rep-PCR primers bind to many specific repetitive genome sequences and multiple fragments of various lengths are amplified. These fragments can be separated by size and charge using microfluidics electrophoresis. A unique rep-PCR fingerprint profile is created containing multiple bands of varying sizes and intensities. Inside the LabChip® (DiversiLab, BioMérieux), the DNA fragments are allowed to bind with a dye, and a graph of fluorescence intensity over time is created. This graph translates into the fingerprint pattern of the sample. First, the purified DNA was quantified with a Nanodrop 1000 spectrophotometer (Thermo Fisher Scientific). The rep-PCR amplification was performed with the designated DiversiLab fingerprinting kit and sizing was performed using a microfluid LabChip. The chip was placed into a 2100 Bioanalyzer (Agilent Technologies, Software Version 3.4.) and the electrophoresis was performed automatically.

The clonal diversity of Actinomyces was analysed for each patient individually. All the comparisons were performed for strains isolated from different sites of a single patient. To assess the reliability of the DiversiLab system, we also compared specimens from different patients harbouring the same species.

Table 1: Distribution of A. naeslundii and A. oris strains the in supra and subgingival biofilm.

Table 2: Clonal diversity of Actinomyces strains in the supra and subgingival biofilms of patients. 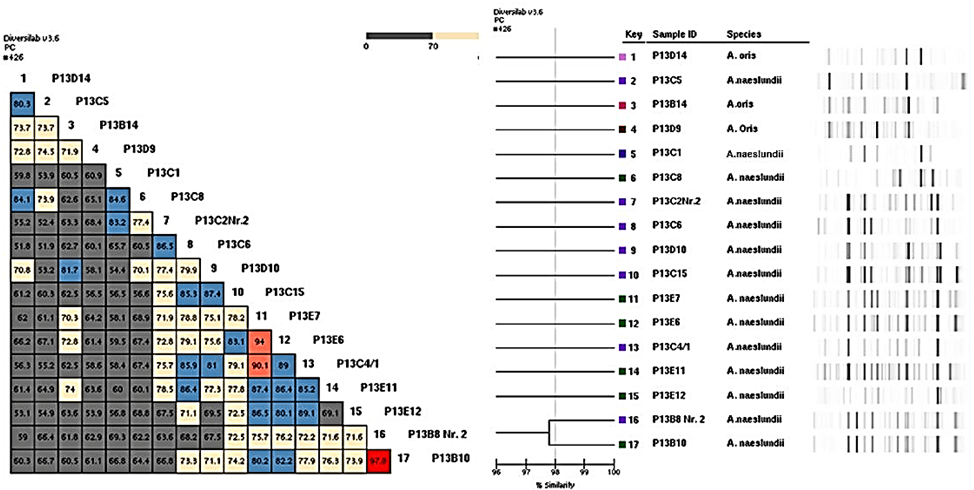 Oral microflora is very complex and exposed to several individual factors such as nutrition, hygiene, and habits [37, 38]. The composition changes during the different stages of life, influenced by medication, health, and general constitution. Actinomyces spp. are early colonisers in the development of oral plaques and can occur in periodontal pockets [24]. During the plaque maturation, they contribute to the coaggregation with other bacteria [39]. A. naeslundii and A. oris possess fimbriae that adhere to the host surface and build up cell-to-cell interaction, especially with oral Streptococci [40]. Cluster analysis of supragingival biofilms has shown that Actinomyces spp. form an Actinomyces-complex in supragingival biofilms with a close relationship to the yellow complex bacteria, that mainly consists of Streptococci [19]. They occur both in healthy subjects and in patients with periodontal disease [41]. A high prevalence of Actinomyces is also shown in peri implantitis-sites [42]. In this study, only A. naeslundii and A. oris were examined since they always occur in oral biofilms and periodontal pockets in high concentrations in almost all the patients [43]. A. naeslundii decreases in quantity from shallow to deep pockets in the process of periodontitis [35]. The clonal relationship within the population of A. naeslundii and A. oris at different depths of periodontal pockets and supragingivally on the sites corresponding to these depths was performed using DiversiLab, an automated repetitive sequenced-based PCR bacterial typing system. In comparison to pulsed-field gel electrophoresis (PFGE), DiversiLab is less time-consuming and more convenient [44].

DiversiLab has shown more practicability in comparison with PFGE but results in more indistinguishable strains and is less discriminatory [28, 44-46]. It has been shown to overestimate the genetic relatedness in comparison with PFGE and to include more isolates to be part of a cluster when compared with that of AFLP (Amplified fragment length polymorphism). However, AFLP is more labour intensive [46, 47]. Overall, DiversiLab was a user-friendly and a very convenient typing method within the scope of this study. The software allows an easy comparison of numerous probes. Compared to AFLP and PFGE, less time has to be invested and the reproducibility is also good. The analysing programme (DiversiLab Software v3.4.4.) provides three options for investigating similarities of various specimens: the modified Kullback-Leibler, the extended Jaccard, and the Pearson´s correlation. These options rely on the relative intensities of the sample pair at each data point. For this study, the Pearson´s correlation was chosen. This method emphasises peak intensities rather than peak presence or absence. This is helpful when there are many different variations in the fingerprint patterns. The comparison is shown in a matrix with percentage numbers that express the similarity of the fingerprint patterns. Thus, samples of every chip that were assessed by the system could be compared with each other. DiversiLab is able to generate genotypic profiles by using a nanogram scale of DNA and is able to compare data longitudinally and potentially between laboratories [48].

Given the complexity of the oral microflora, one might expect to find clonal diversity within the members of a species. The high prevalence of A. naeslundii and A. oris supra and subgingivally offered the possibility to study this hypothesis. The results were diverse as multiple colonisation patterns were observed. Some patients harboured multiple genotypes of A. naeslundii and/or A. oris. For instance, patient no. 13 (Figure 2) showed a high clonal diversity harbouring 17 different genotypes. Other patients showed a less striking diversity with only two genotypes in each: patient no. 16 showed 2 genotypes of A. naeslundii, while patient 20 showed 2 genotypes of A. oris. Other patients, although colonised with more than one clone, harboured a single clone also on different sites. Our results showed that identical clonal strains occur in subgingival shallow depths more often than in the other subgingival depths. Supragingivally, the majority of the strains were found in the sites corresponding to the pockets of depths 5-6mm. In our patients, a common distribution pattern of identical isolates was not detected. In some patients, identical isolates were found supragingivally while subgingivally, they were colonised with different clones. The distribution of identical isolates also showed a high variability. For example, one clone isolated thrice supragingivally in patient no. 3 was also isolated subgingivally, but together with other isolates which were not similar to the initial ones. However, in patient no. 7, we found the identical clone five times supragingivally and only once together with other different clones subgingivally.

Actinomyces spp. are facultative anaerobic bacteria, which can not only survive in the deep pockets, but also in oxygen-rich supragingival biofilms. This leads to a suggestion that clones may adapt to different environmental circumstances as well as possibly to different forms of therapy. The bacteria might possess various virulence factors and develop resistance mechanisms against antibiotic agents. Thus, further studies should include various clones when investigating these properties. The clonal relationship within the population of A. naeslundii and A. oris in an individual is variable and unpredictable. It varies from the presence of multiple genotypes with no clonal similarity to the presence of only two different clones supra or subgingivally at different sites. While studying natural proportions, it seems that clonal diversity is not informative. To compare similar studies revealed that Streptococcus mutans genotypes showed no pattern of occurrence and number [49].

The study design was approved by the appropriate ethics review board.

© 2021 Lena Wischerath. This is an open-access article distributed under the terms of the Creative Commons Attribution License, which permits unrestricted use, distribution, and reproduction in any medium, provided the original author and source are credited. Hosting by Science Repository. All rights reserved.
DOI: 10.31487/j.DOBCR.2021.02.03

Table 1: Distribution of A. naeslundii and A. oris strains the in supra and subgingival biofilm.

Table 2: Clonal diversity of Actinomyces strains in the supra and subgingival biofilms of patients.